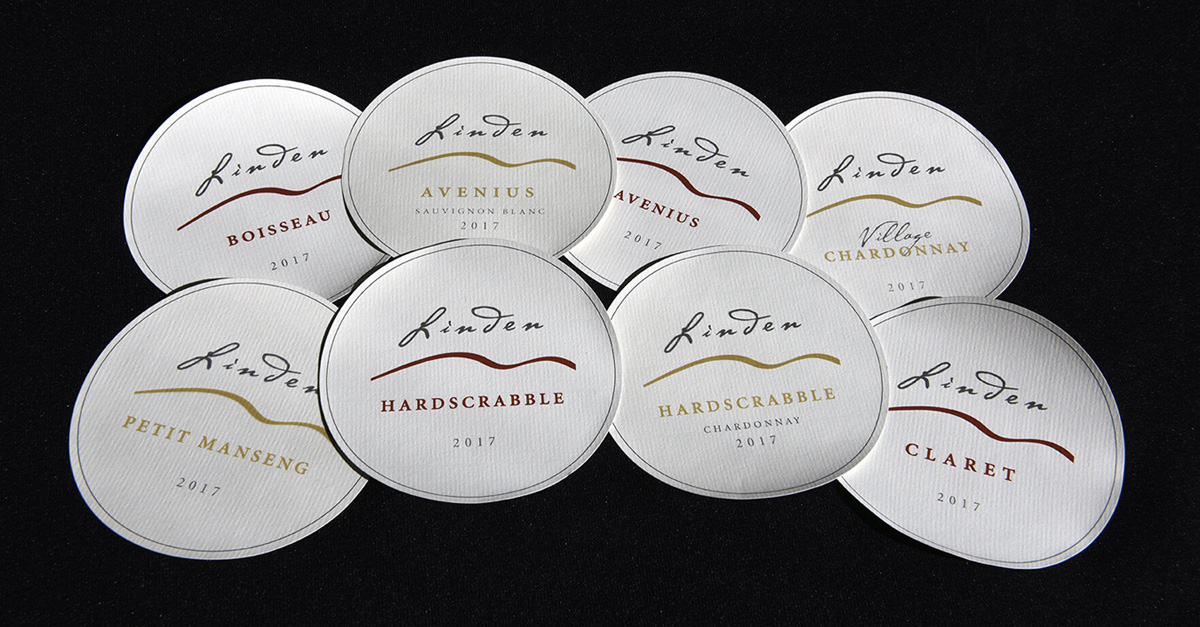 “Fantastic weather,” he exclaims, grinning. Bearded and sinewy, the 65-year-old wears a faded stocking cap, Carhartt jacket, knee-high galoshes — and looks more like a veteran lumberjack than one of the most respected winemakers in the U.S. “This is my favorite season, when things are quiet and I get to spend a lot of time alone with the vines,” he says.

Law founded Linden Vineyards about 70 miles southwest of Washington D.C., in 1983 and quickly became a leading figure of the Virginia wine revolution. He and a team of four winemakers work three sites containing a combined 30 acres of vines that produce 4,000 cases of estate wine annually. Vintages are coveted by in-the-know sommeliers and oenophiles alike.

“Linden makes the best wine on the East Coast, bar none,” says Steven Elhafdi, wine director at the iconic Goodstone Inn & Restaurant in Marshall, Va. His 500-plus-selection wine list has won annual Wine Spectator Awards of Excellence since 2015. “But if you don’t live in this area, you’ve probably never heard of it.”

That’s largely due to Law’s preference for simplicity. He keeps operations small enough to intimately manage growing and winemaking processes, mostly by hand. He invests next to nothing in advertising and doesn’t enter national or international contests. Loyal customers in southern Maryland, Washington, D.C., and Virginia account for more than 90 percent of sales.

“Jim isn’t interested in fame or notoriety, and he isn’t motivated by money,” says Rutger de Vink, owner and vineyard manager at RdV Vineyards, which is widely regarded as one of the best wineries in Virginia. De Vink apprenticed under Law before launching RdV in 2008, which de Vink largely credits for the winery’s success. His flagship Lost Mountain Cabernet Sauvignon was the first Virginia wine to command more than $100 a bottle and is competitive with other top Virginia Cabs on the market.

“Jim’s great love is working with the land to help it produce beautiful wines that ever more perfectly express the terroir,” says de Vink. For Law, the pursuit is a way of life; the business side of operations is a means to an end. “The wine is exquisite, and, after so many years, has built up a cult-like following,” de Vink says.

Vintages sell out and Law focuses on fine-tuning techniques and raising the bar. But he doesn’t go out of his way to talk about it — Linden is a secret that someone in the know has to turn you on to.

“I bungled my way into this career through naivety and dumb, youthful overconfidence,” says Law, who founded Linden shortly after turning 28. “By the time I realized what I’d gotten myself into, it was too late. I was in too deep to quit.”

Virginia wine was then in its infancy. Growing European wine grapes at commercial scale on the East Coast was believed impossible until 1978 — as native pests and cold winters killed saplings within a year. Then a pair of young Italian winemakers pioneered new grafting and planting techniques at what became Barboursville Vineyards.

“But the wine industry thought we were crazy for bothering with it,” says Barboursville co-founder Gabrielle Rausse. The response of Virginia’s farming establishment was worse. “The commissioner of agriculture told me, ‘Throw away your boss’s money if you like, but I’ll shut you down if you encourage even one farmer to take this up,’” Rausse says.

Virginia was subsequently home to about eight wineries in 1982. Growing standards had yet to be established; the terroir was a viticultural Wild West. But Law wasn’t aware of this backstory. He’d relocated from Ohio hoping to build his farming résumé.

“I answered a help-wanted ad [for a farm manager position], which proved to mostly entail tending an elderly Italian gentleman’s home vineyard,” says Law. “I didn’t have much experience, but the pay was little of nothing, so he gave me the job.”

At the time, Law’s wine-related experience had consisted of a year of grunt work at an Ohio winery. Before that, he’d trained with the Peace Corps and helped teach modern agricultural techniques in the country now known as the Congo. “I graduated from college and decided to take some time off to explore, be outside, and try something different,” says Law. Working in Africa hatched dreams of launching a farm. “I said, ‘Man, I love this.’ But I didn’t have any money, and nobody was going to lend me any money, so [the idea] felt pretty pie-in-the-sky.”

The new job brought unexpected insight. Law was tasked with planting and tending vines, harvesting and crushing grapes, and helping his boss bottle wines. While he says the vino was far from great, the experience introduced him to the lifestyle of a farm-vintner.

“I realized making estate wine could bring a deep and intimate relationship with the land,” says Law. Done right, it could elevate farming to the realm of art. The epiphany led to Law’s extensive research about terroir-centered production methods in Old World vineyards. The approach, he says, was less about tinkering in the winery and more about “listening to the land and helping it speak through the grapes, then trying to refine that communication over the course of years and years.”

To refine his palate, Law saved money and attended fine wine tastings. He began to frequent educational workshops hosted by luminaries like Rausse. The two hit it off and developed a professional friendship. With Rausse’s encouragement, Law started scheming up ways to establish a vineyard.

“By then, I’d discovered a little about what worked and much about what didn’t,” jokes Rausse, who was then working with historic Monticello to launch Jefferson Vineyards. Virginia’s finicky weather and predominantly clay soils made site a top priority. He urged Law to look for an east-facing mountain that wasn’t very tall and had poor, rocky soils. Quick drainage and low water retention ensure noble red varieties like Merlot thrive, despite occasionally heavy seasonal rains. Elevation protects against early and late frosts and extreme summer heat.

Law took the advice. He found an abandoned apple orchard in a rural area, and convinced his parents to co-sign an owner-financed loan for 76 acres. Continuing to work for the Italian winemaker, he spent weekends and days off camping on the property, clearing trees, and prepping the site. By 1985, Law had planted eight acres of Chardonnay, Cabernet Sauvignon, Cabernet Franc, Vidal, and Seyval almost single-handedly. His first vintage went up for sale three years later.

“But I still wasn’t off the ground,” says Law. In addition to handcrafting boutique wines for Linden, “I was teaching workshops, consulting, grafting vines, selling apples from the old orchard — anything I could do to pay the bills and make necessary investments. It was a struggle to survive.”

A breakthrough came in the mid-1990s. Linden’s vines had matured. Coupled with the site and Law’s obsessive hands-on approach, Elhafdi and Rausse say they produced one of Virginia’s first remarkable vintages.

“I was blown away,” says Elhafdi, who discovered Linden around that time. “I’d pour a glass for [D.C. aficionados], and they’d accuse me of fibbing when I said the wine was made in Virginia. They’d say, ‘That’s impossible!’ But it was absolutely true.”

The achievement put Linden on the map and, perhaps more importantly, made it profitable. Financial success enabled Law to level up. He took research trips to non-Mediterranean Old World wine hubs in Spain and France. An experimental vineyard was installed to test how different grape varieties would adapt to Linden’s soil and climate. Techniques were tweaked. Underperforming old vines were ripped out and replaced. New ones were planted with an eye toward a longer, 20-year maturational process.

As a result, “the wines just got better and better,” says Elhafdi. Law’s relentless pursuit of perfection won him a reputation: “People started calling him the ‘Oracle of Virginia Wine,’ and that’s exactly what he was,” Elhafdi says.

“Jim has been setting the standard for excellence in this region for more than 20 years,” says Rausse. That’s no small compliment, considering Rausse has served as a founding consultant for more than 200 of Virginia’s current 312 wineries.

But Law has done more than nurture vines. He’s also mentored some of the state’s most promising new producers — including de Vink, Jeff White of Glen Manor Vineyards, and Jim Dolphin of Delaplane Cellars.

“When Jim Law speaks, other winemakers listen,” says Dolphin, who regularly consults Law about vineyard challenges and who won a pair of 2020 Virginia Governor’s Cup gold medals. “They know he knows more than anyone else in the room. He’s done as much [as], if not more than, anyone to establish Virginia wine on the world stage.”

Still, Law says he isn’t done innovating. “The great joy of my life has been experimenting and trying to discover what this new terroir is truly capable of,” he says. “Of course, it’s not something I’ll get to experience. But I like to think I’ve primed the pump for the next generation, so to speak.”

To that end, Law has spent the past 10 years grooming Linden winemaker Jonathan Weber to assume the mantle. But ask Law about retiring and he says, “My exit strategy is death; ideally, on a cold winter day, alone among the vines.”

Home Videos The WORLD of WINE – Wine News. Cheap wine, tasting notes and cooking with wine The World of Wine – May 2021 … END_OF_DOCUMENT_TOKEN_TO_BE_REPLACED

How to visit Napa Valley on a Budget. In this video Carson and I explain a few ways to enjoy Napa on the cheap. Tip and advice about how to visit Napa … END_OF_DOCUMENT_TOKEN_TO_BE_REPLACED

Home Videos Get To Know Argentina Wine | Wine Folly If you love Malbec, Argentina is your ultimate wine region. But that’s not … END_OF_DOCUMENT_TOKEN_TO_BE_REPLACED