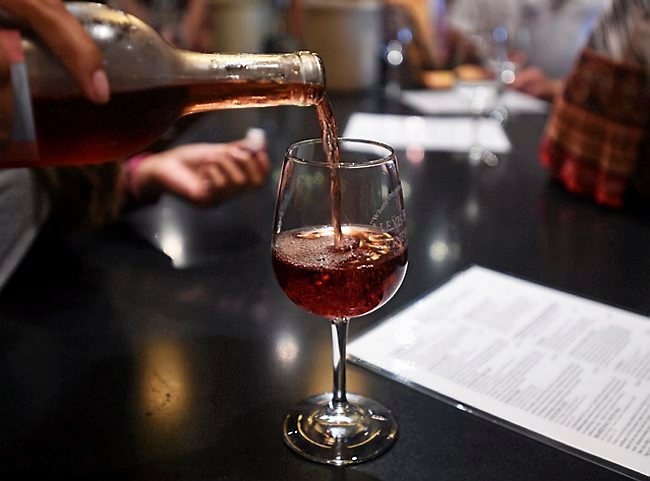 When the pandemic hit, Hoyt Hill, the wine director at Sunfish Cellars in Lilydale, was distraught.

His favorite part of the job, hosting wine tastings, wouldn’t be possible for a while.

His girlfriend suggested he do tastings over Zoom.

Now, he’s well acquainted with the technology. In fact, he has hosted wine tastings featuring big-name guests like chef Thomas Keller and Gaia Gaja of Italy’s Angelo Gaja wines, twice on most weeks since March of 2020.

The tastings, which caught on quickly with oenophiles across the country, go like this: Hill tells participants which two or three wines they’ll be tasting. They pick up bottles, available at Sunfish Cellars, and he and the guest discuss the wines, but also life — from farming to cooking to philosophy. The discussions are wide-ranging, intimate and often times surprising.

He’s talked to a winemaker who helped NASA perfect technology to spy on wheat crops in Russia (yes, you read that right) and another who uses a rotation of animals (horse, sheep, geese, etc) to add their excrement to the soil where grapes are grown. That winemaker also has a story about one of his dogs scaring off an eagle to save a lamb.

Keller spent a lot of time talking about humility and how his seven Michelin stars are a testament to teamwork.

Hill says the secret to getting great stories out of his guests is simple: He does way more listening than talking.

And pandemic or not, the tastings will continue. In fact, Hill has so many guests that he’s already planning into next year.

Of course, eventually, in-person tastings will resume, but Hill thinks many people have grown to love the Zoom tastings. Besides the fact that participants get to drink in the comfort of their own homes, there are other are advantages.

“I don’t think we’ll ever stop the Zoom tastings, because it just opens up the whole world to us,” Hill said. “Gaia Gaja isn’t going to come to the Twin Cities to taste wine, but she’ll do a Zoom call with us once a year.”

The free tastings take place Thursdays and Saturdays. On Thursday, you taste three wines and the conversation, which starts at 6:30 p.m., takes around an hour and a half. On Saturday, Hill calls it “One Expert, Two Wines, Thirty Minutes,” and it takes place starting at 4 p.m. The calls are free. You just buy the wine. Or not.

“There’s one guy who whatever we’re drinking, he’s drinking Barolo because he loves Barolo,” Hill said. “But he buys it from us, so whatever floats his boat.”

Invitations are sent via email the week before — sign up for the shop’s newsletter to be invited — and wines are available anytime before the tastings. There’s a list of upcoming guests on the website, too, and you can even order the wines for the current week’s classes online and pick them up at the store.

Sunfish Cellars (981 Sibley Memorial Highway, Lilydale; 651-905-1080) is located within Buon Giorno, the Italian deli associated with I Nonni in Lilydale.

For more information about the tastings, or to sign up for the newsletter that alerts you to upcoming guests, go to sunfishcellars.com.

Home Videos The WORLD of WINE – Wine News. Cheap wine, tasting notes and cooking with wine The World of Wine – May 2021 … END_OF_DOCUMENT_TOKEN_TO_BE_REPLACED

How to visit Napa Valley on a Budget. In this video Carson and I explain a few ways to enjoy Napa on the cheap. Tip and advice about how to visit Napa … END_OF_DOCUMENT_TOKEN_TO_BE_REPLACED

Home Videos Get To Know Argentina Wine | Wine Folly If you love Malbec, Argentina is your ultimate wine region. But that’s not … END_OF_DOCUMENT_TOKEN_TO_BE_REPLACED