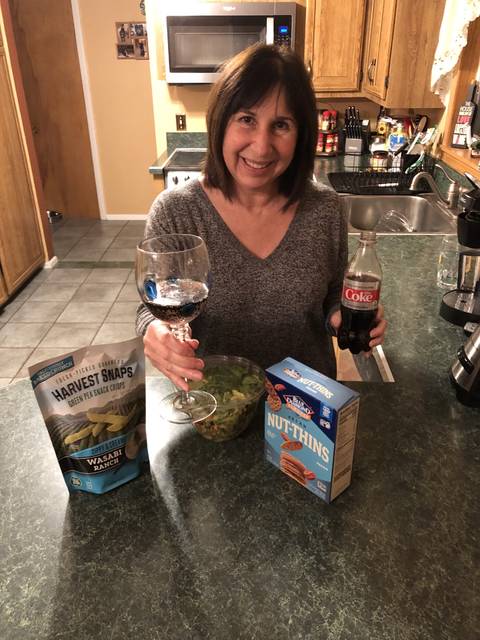 I put on some extra pounds last year. The quarantine 15 is what they’re calling it. Because I’ve been working from home in sweatpants all day, I didn’t notice how quickly my weight crept up.

My wakeup call was a December checkup with my doctor. When the nurse weighed me, I couldn’t believe the scale. When the doctor read the chart and said “you know you’re nearly 10 pounds heavier than you were last year. You’re still within a healthy weight range, but you may want to address that.” He asked if anything was wrong, and I said, no, but all I bleeping do is eat. He laughed, but I didn’t think it was funny.

Nearly 10 pounds may not seem like much, but on a 5’2” frame it is. When I tried to put jeans on, they were tight. It came down to buying new clothes or losing weight.

I decided in late December I was going to give Dry January a try. While I’m only a social drinker, mostly on the weekends, I found myself drinking more over the holidays. I knew the calories in the cocktails weren’t helping with my weight. My sister-in-law and others who had quit drinking in the past said they felt so much better physically.

It wasn’t easy. January brought a lot of drama and combining not drinking with a diet was not the smartest move. When I decided to give Dry January a try, both my son Greg and my daughter Katie said they would do it with me. Katie then decided she wanted to try WW instead. She definitely didn’t want to attempt both. Greg started Dry January a day late so he could finish the IPAs in his fridge. He gave up the challenge only six days in when he went to lunch with his uncle and decided to drink beer. I had a friend who gave it a whirl as well, but she packed it in by mid-month, so I was on my own.

The hardest part for me was going out to dinner with friends when everyone else was drinking. I found people were mostly intrigued and wondering why I would even want to do this. I learned some of my friends were supportive, while others were quick to encourage me to give it up and have a cocktail. Even the waitresses who knew me were confused by no wine or bread with my dinner.

I found people to be a lot chattier when they drink, including my husband and my friends. When you haven’t had a cocktail, those who are drinking seem loud. On a recent night outto celebrate Melina’s birthday with my son and husband I found she was my biggest supporter. She and I drank Diet Cokes while my husband and son were unbearable in their teasing. While Melina didn’t commit to dry January, she ended up not drinking all month to save on WW points.

Another test was a virtual Chaddsford Winery wine tasting and murder mystery event that was a Christmas gift from my son. It took place on a Friday night in January and came with three bottles of wine for tasting during the event. There were 40 different households on the Zoom event, all drinking wine. I didn’t want to give up the challenge, so I drank water out of a wine glass to feel more festive and stored the wine for later use.

How do I feel after a month without drinking?

I slept a lot better, for starters. I also had a bit more energy and woke up less groggy on the weekends. The healthier diet also may have been a factor.

I was only a weekend social drinker, so perhaps Dry January didn’t have as great of an impact on me as it would for someone who was a heavier drinker.

Am I giving up drinking completely? Absolutely not. I can’t wait until next weekend to have a glass of wine.

I may not be staying dry, but I did decide to stick with WW. I’ve lost 8 pounds on the Dry January/WW combo diet so far and would like to lose five more.

I enjoy that Melina, Katie and I are doing this together, and the process is easier with the support and sharing of recipes and low-point foods we discover.

Melina is a master at finding low point breads and Katie at low point snacks, while I’m the experimenter with recipes. As a person who’s tried just about every gimmicky diet – from the cabbage soup diet to intermittent fasting and carb cycling, I have found say WW healthier and more doable. You download an app, pay a monthly fee for the program you want, complete an online assessment, and get a color designation and daily point allotment. You also get some weekly freestyle points, which are great for a cheat day.

I enrolled in the basic program and was designated purple, which meant I had hundreds of healthy zero point foods. That can be a good or a bad thing, depending on how disciplined you are about portion control.

There were days I was very hungry, but didn’t want to look at another vegetable or piece of fruit. Other days I felt satisfied. I learned I really needed to have plenty of low point options on hand all the time.

What I love most is the WW barcode scanner on the app that enables you to scan foods as you shop. The recipes are also pretty good if you enjoy cooking.

Low fat mozzarella or feta — about a quarter to half cup

Spray the bottom of pan with non-stick spray. Sauté chicken until browned. Toss in the garlic while the chicken is browning. Toss in the bell pepper and let sauté a bit. Once chicken is browned and the peppers have softened a bit, pour in the cooking wine, then add in the sun-dried tomatoes, asparagus, artichoke hearts , herbs, and chicken broth. Squeeze in the juice of one lemon. I usually thrown the squeezed lemon halfs in the pan to simmer with everything as well, because I like a lemony flavor. Let it simmer until the chicken is cooked and asparagus softened. Right before serving I toss in the chopped mozzarella to melt.

I eat this as to keep my point count low, but I make pasta to serve it over for my husband. It’s also delicious tossed with whole wheat orzo.

Home Videos The WORLD of WINE – Wine News. Cheap wine, tasting notes and cooking with wine The World of Wine – May 2021 … END_OF_DOCUMENT_TOKEN_TO_BE_REPLACED

How to visit Napa Valley on a Budget. In this video Carson and I explain a few ways to enjoy Napa on the cheap. Tip and advice about how to visit Napa … END_OF_DOCUMENT_TOKEN_TO_BE_REPLACED

Home Videos Get To Know Argentina Wine | Wine Folly If you love Malbec, Argentina is your ultimate wine region. But that’s not … END_OF_DOCUMENT_TOKEN_TO_BE_REPLACED