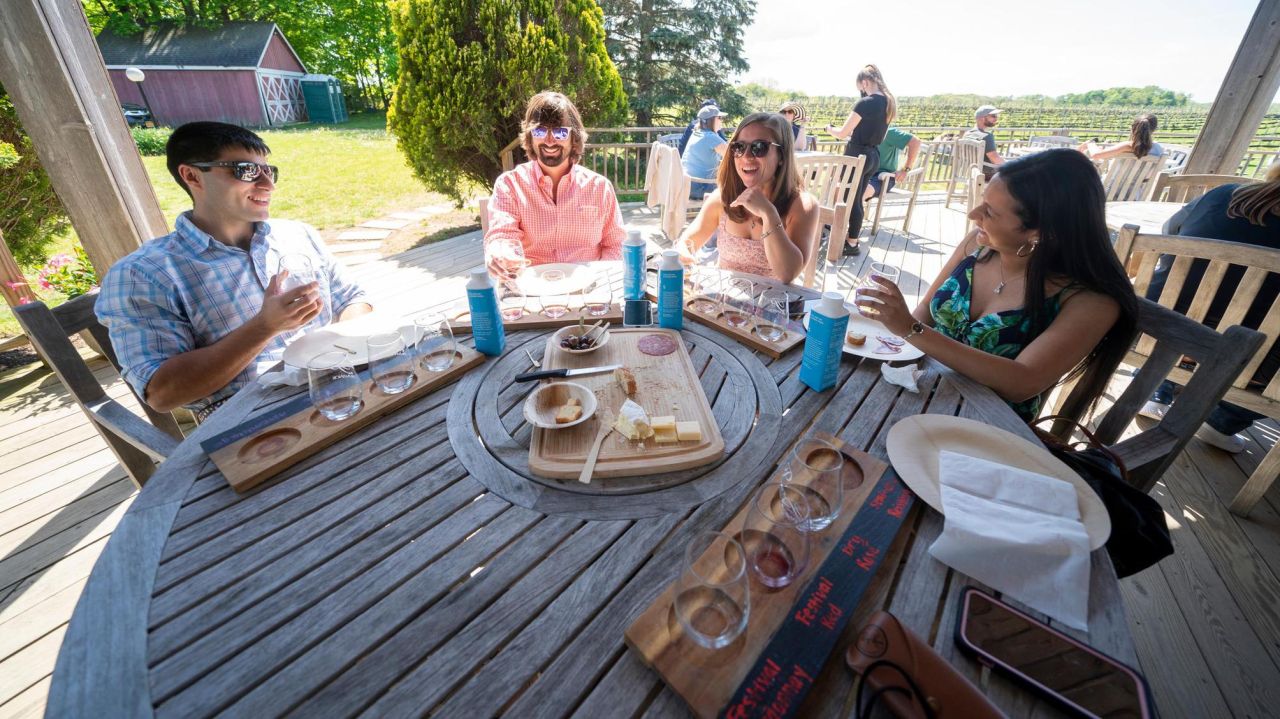 Last year at this time, Long Island wineries faced the most daunting challenge of the region’s near 50-year history as COVID-19 restrictions shuttered their tasting rooms.

Today, wineries are moving to capitalize on the legion of new customers who packed Long Island’s wine region in the months after the lockdown, and they are investing in their wines, vineyards and tasting rooms as they prepare for a summer season that some predict could be double last year’s.

Traffic to the region, which fluctuates between 750,000 and 1 million visitors a year, already is trending toward the higher side of the scale, winery owners say. Relaxation of mask-wearing rules could provide a bigger bump.

Long Island wineries are ready, with vastly expanded outdoor seating areas and events, a flurry of new wine offerings and ways to drink it, including cans, and plans to attract new investment.

In Mattituck last week, workers were putting the finishing touches on the newly renamed Rose Hill Vineyards (formerly Shinn Estate Vineyards) while general manager Chelsea Frankel was making bigger plans to expand the family business. Last year, when COVID shut down the tasting room, she revved sales online, and the vineyard was ready with doubled outdoor seating area to accommodate a flood of visitors.

“2020 was the best year we had in terms of people visiting,” said Frankel, who sits on the board of Long Island Wine Country, the region’s association. “It felt like an overnight explosion.”

With more people coming to Long Island this spring, she added, “I think this year is going to be two times [2020’s volume]. People have started coming out in May. We’re doing numbers now that we typically do in the middle of June, and this is not even the season yet.”

The company, after acquiring Croteaux Vineyards in Southold last year, is in the process of acquiring and planting new vines on two additional farm properties purchased in the past few months, adding 80 acres, she said. The plan is to plant 50 more acres of vines next year, and keep an eye open for new opportunities.

“We definitely see between Croteaux and Rose Hill so much room for growth, that’s why we’re planting 50 more acres,” Frankel said. And that’s not all.

“There are other properties we’re looking at that have a lot of appeal to them,” she said. “There’s a lot of ideas that we’re floating around. We’re definitely keeping our eyes open and we’re excited to see what else comes available. And what else people are willing to sell.” Vineyard 48, the shuttered Cutchogue vineyard and winery, is one the company has kicked the tires on.

The Frankels’ plans for growth mirror those of other well-heeled investors, including the Soloviev Group, which recently reopened Peconic Bay Vineyards in Cutchogue and plans to expand its vast vineyard holdings of 300 acres with new plantings, while eyeing a restaurant and hotel; and RGNY, the Mattituck vineyard and winery owned by the Rivero Gonzalez family that also has been increasing its planting and is considering a wine-themed restaurant, luxury homes and a bed-and-breakfast on the 205-acre property.

For Kareem Massoud, winemaker for Paumanok Vineyards, which itself doubled in size after acquiring Palmer Vineyards in 2017, the growth despite COVID is the result of a “perfect storm” of factors, including the influx of stay-cationers who have been surprised by the quality of the wines and the experience. Paumanok has plans for a guesthouse on the Palmer property, and it recently bought a property with a home next to its Paumanok headquarters that could also have a guesthouse.

“The food and the wine culture that’s developing out here is really rich,” said Massoud, who is president of Long Island Wine Country.

While COVID-19 was “a tragedy in so many ways,” he said, it “also forced people not to travel. And so I think more and more Long Islanders are sort of discovering that not only are we here, but the wine-country experience on the East End is on par with anywhere in the world. You don’t have to fly.”

The quality of Long Island wines has vastly improved in the last 20 years, and there’s lots to do in the region — beaches, parks, restaurants, bays. So much so that traffic has made some areas nearly impossible during summer weekends.

For most wineries, this spring is the time to tout new wine offerings, new outdoor experiences, and new ways to pair local offerings with their wines.

RGNY, the former Martha Clara Vineyard owned by the Rivero Gonzalez family, is transitioning its Riverhead tasting room to a more experience-based space, said Amanda Rivera, the winery’s creative director. The plan includes create-your-own blending sessions, a winemaker’s tour and a “choose-your-own experience” at the vineyard that lets guests mix and match wines, snacks and desserts at tables around the property.

RGNY later this spring will be launching amphora wines, using chiefly gewurztramer grapes that are hand-harvested and crushed using methods reserved for red wines, Rivera said. The grapes are made leaving skins, seeds and juices together for nearly two weeks in clay vats in cool temperatures, before fermentation. It gives the wine its orange hue and special taste.

A bungalow with friends

Marcari is also offering private indoor tasting suites for larger parties of up to 15 people, she said, all overlooking the vineyards.

Sparkling Pointe in Peconic is launching a new NV Cuvee Carnaval Rosé, a pink sparkling wine with cherry and strawberry notes, while releasing a 2016 Blanc de Noirs, a blend using Pinot Noir and Pinot Meunier grapes. There will also be a 2017 Blanc de Blancs, using all chardonnay grapes.

At Suhru Wines in Cutchogue, marketing and sales director Shelby Hearn said the company has made changes to its outdoor space to elevate the customer experience, including additional outdoor seating. There’s an expanded food offering to include meats, cheeses, spreads, crackers, breads and sweets, she said; a virtual tasting offering that pairs wines with certain foods for shipment to customers has also been enhanced.

Suhru has also introduced new wines this year, including a 2020 pinot grigio, winner of a gold medal at the 2021 New York Wine Classic, and a 2019 Dry riesling that won a double gold medal at the 2021 International Eastern Wine Competition, Hearn said. The company, which last year offered its first wine in 375 ml cans, this year is expanding the offering with pinot grigio and rosé in cans. A 2019 Shiraz is due out soon, she said.

Baiting Hollow Farm Vineyard, under new ownership after a 2020 sale, is launching a space at the winery called The Backyard, said Rose Vasta, tasting house manager. The new backyard area will offer not only wine tastings but spirits, a Wine-a-Rita frozen drink machine, eight station taps for wine, beer and cider, plus pizza and other edibles from a gourmet food truck. It will also offer a variety of yard games and live music. Areas can be rented for $250 to $500 for the entire day, and can accommodate from 14 customers to 50.

Peconic Bay Winery, which was purchased in 2019 by the Soloviev Group, is hosting a grand opening this month after a year of licensing and building upgrades, and plans to work with its on-property farmstand to offer food and other items. Grander plans in the coming years could include a wine-themed restaurant and hotel.

Jamesport Vineyards, which has an on-site bistro called the Little Oak Fired Kitchen, released new 2020 rosé, a 2019 reserve chardonnay and 2019 Estate Merlot wines this year. A 2018 Cabernet Franc is due out soon, said office manager Joanne Goerler. Visitors must be 21 or older on Saturday and Sunday (children are allowed in Monday through Friday), and reservations are always required via the company’s website.

Paumanok is among wineries offering wine in cans under both its Paumanok and Palmer brands, said Massoud. Both will be 2020 rosé wines in 250ml cans, and out by the summer season, he said.

Both locations and their tasting rooms are open seven days a week, he said, and while both accommodate walk-in customers when space is available, reservations are “strongly recommended.”

Spritzer in a can

Chronicle Wines at Peconic Cellar Door, which had suspended offering in-person flight tastings at its Peconic tasting room, will restart the offerings on June 4, said owner Alie Shaper. The location is open now for glass and bottle sales from noon to 5 p.m. Friday through Monday. Chronicle Wines is also adding a new summer seasonal flavor to its line of wine spritzers in cans: summer rosé with watermelon yuzu, Shaper said.

Summer in a Bottle

On the South Fork, Wolffer Estate Vineyard is offering a new Taste of the Season menu to pair with its wines, offering seasonal foods such as short ribs, gazpacho, lobster rolls and local chocolates, according to Valerie Fraser, associate marketing producer. The tastings are led by an in-house wine expert.

Wolffer also launched several new products: a new Summer in a Bottle rosé in a half-bottle size, a new Summer in a Bottle white from a 2020 vintage launched last week, and new additions to its limited quantity Cellar Series including a special “own-rooted” merlot rosé. The winery is also in the process of replacing some old vines with new Trebbiano grapes at the Sagaponack Vineyard, Fraser said.

For more details about Long Island’s wine scene, and for help finding the perfect winery for you, look to Newsday’s Winery Finder, newsday.com/wineryfinder.

Home Videos The WORLD of WINE – Wine News. Cheap wine, tasting notes and cooking with wine The World of Wine – May 2021 … END_OF_DOCUMENT_TOKEN_TO_BE_REPLACED

How to visit Napa Valley on a Budget. In this video Carson and I explain a few ways to enjoy Napa on the cheap. Tip and advice about how to visit Napa … END_OF_DOCUMENT_TOKEN_TO_BE_REPLACED

Home Videos Get To Know Argentina Wine | Wine Folly If you love Malbec, Argentina is your ultimate wine region. But that’s not … END_OF_DOCUMENT_TOKEN_TO_BE_REPLACED