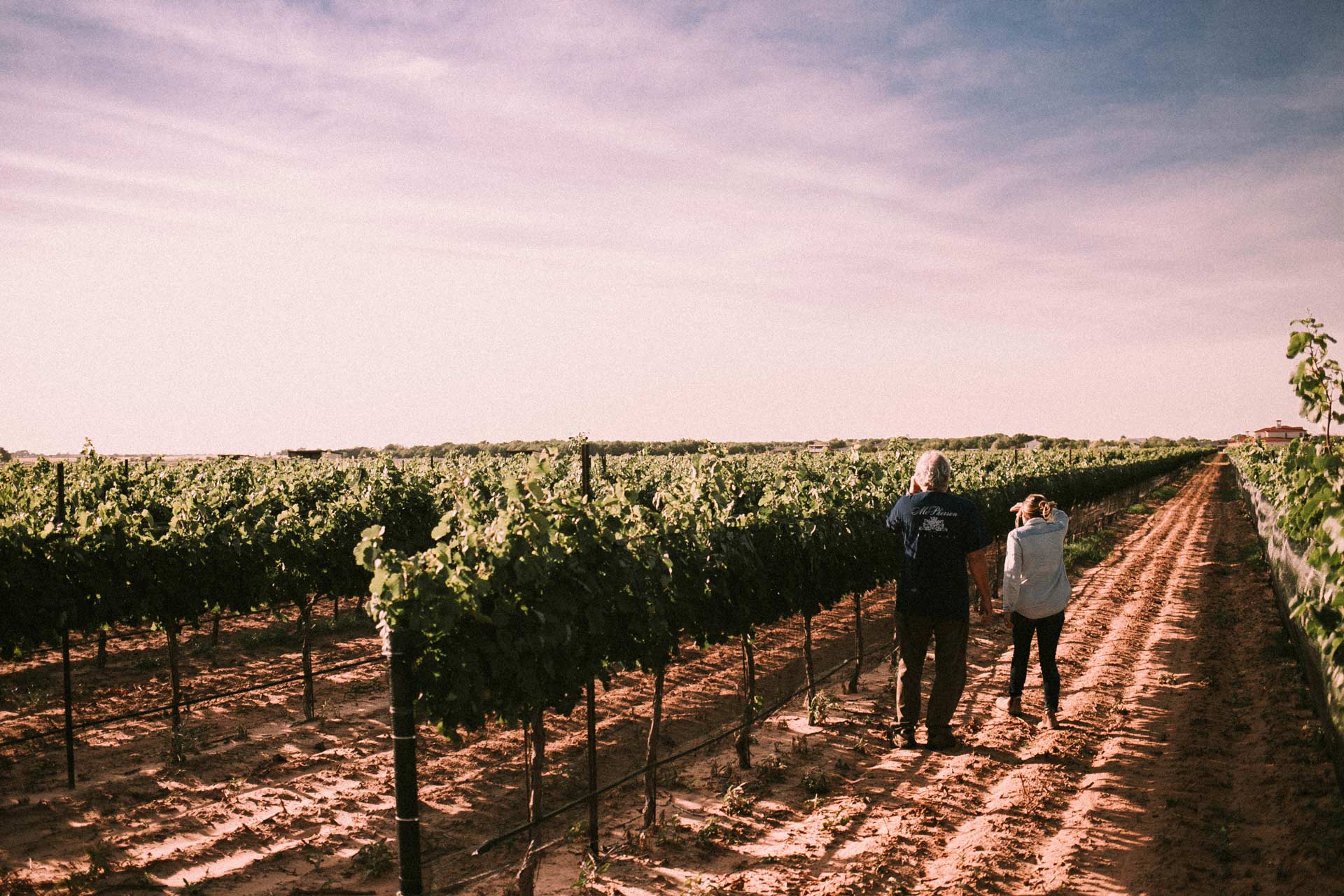 In 1962, Clinton “Doc” McPherson, a chemistry professor at Texas Tech University, and his colleague, Bob Reed, an assistant professor of horticulture and entomology, began to cultivate Sangiovese grapes from a planting on Reed’s back patio in Lubbock, Texas.

The duo would establish that Vitis vinifera could adapt readily within the Texas High Plains region, a flat area that’s dry and warm during the day, and cool at night.

This wasn’t entirely a fluke. Between 1909 and 1937, the Texas Agricultural Experiment Station in Lubbock, located 70 miles east of the Texas-New Mexico border, spearheaded a grape-growing study in the Texas High Plains, located in northwestern Texas.

The pre-war study was sidelined in favor of a focus on major crops like cotton and grain sorghum.

But in the 1950s, Dr. W.W. Yocum, a horticulture professor at Texas Tech, planted grapevines in research plots on campus. Reed salvaged a handful of the burgeoning plants a decade later during a period of construction and university expansion.

“I put it in the backyard for an ornamental to shade the patio in 1962 and had grapes in 1966,” he said in a 1974 interview with the Lubbock Avalanche-Journal.

In 1992, McPherson compiled 112 pages on the region’s climate, geology and history with viniculture to accompany his application to designate the Texas High Plains American Viticultural Area (AVA), which was established on March 2, 1993.

Today, the AVA sprawls eight million acres through 24 counties, and at its heart is Lubbock. Currently, more than 75 varieties are planted on 3,700 acres within the AVA. High Plains growers cultivate more than 80% of the state’s wine grapes each year.

The climate, topography and soil of the Texas High Plains Region

The Texas High Plains AVA lies between desert to its west and more humidity to the southeast. Its northern border is 20 minutes south of Amarillo. The southern edge runs east from the New Mexico border and intersects with the vast Llano Estacado, or “staked plain.” It was formed by deposits from the Rocky Mountains in the Tertiary Period, along with erosion from the Pecos, Red, Brazos, Canadian and Colorado river systems.

While Llano Estacado ranges from 2,800 to 4,100 feet above sea level, it’s one of the flattest areas in the U.S. On table-flat land at such elevation, little rainwater collects. Grapes require far less water than cotton or cattle, and the warm, dry conditions support Rhône varieties and many other grapes.

The region receives less than 20 inches of rainfall each year. The Ogallala aquifer, a reservoir which extends from South Dakota to Texas, supplies further irrigation.

Steve Newsom, a partner and grape grower at English Newsom Cellars, describes the sandy soils as “a blank canvas,” low in natural nutrients like nitrogen, potassium and phosphorus. Growers can determine how much of these nutrients to feed plants during fertilization, which affords more control during cultivation.

It might seem like the Texas heat would challenge viticulture, and there are places where that’s the case. However, aside from late-spring freezes, Texas High Plains grapes mature during the warm days.

The grapes do especially well in the heat of summer, while the cooldown during evenings preserve their acidity.

The grapes of the Texas High Plains AVA

When the wind eclipses 20 miles an hour, a unique microclimate forms. The air, which has been in contact with the sandy terrain, cools and circulates through the vines.

White grapes in this Texas AVA

Kim McPherson has referred to Viognier as the “state white grape.” He also cultivates a bone-dry Chenin Blanc with an old rural style and feel and a thirst-quenching Piquepoul.

Newsom grows all his grapes in his Hockley County vineyards, just west of Lubbock, at an elevation of 3,600 feet. He says that Viognier offers tremendous yield in Texas in terms of both production value and flavor.

His 2018 Viognier recently won Best in Class (Best Viognier) at the 2020 San Francisco International Wine Competition (SFIWC). While Roussanne is often cultivated on hillsides in the Rhône Valley for protection from frost, Newsom considers it rewarding to grow it in the sunshine for its instinctive acid balance.

Dr. Vijay Reddy and his wife, Subada, have grown grapes in the Texas High Plains at their winery, Reddy Vineyards, since 1997. Reddy arrived in the High Plains from India in 1971, with plans to pursue a doctorate in soil and plant science. He and his wife established a soil-consulting laboratory while they farmed cotton and peanuts.

Reddy planted his grapevines after he drew inspiration from the “premium quality of grapes in the Texas High Plains.” The couple now cultivates 38 grapes on more than 300 acres. Its Sauvignon Blanc, along with its M3 Red Blend, earned silver medals at the 2020 SFIWC.

The AVA’s reds are diverse, creatively made and full-bodied.

Chace Hill, co-owner of Burklee Hill Vineyards, says that many Texas winemakers tend to “let the grapes speak for themselves.”

Burklee Hill developed a single-varietal Pinot Meunier in 2017. Its Cabernet Sauvignon hits distinct notes of plum and blackberry, and it offers a bright finish.

McPherson’s La Herencia (“the inheritance”) is a Tempranillo blend with Carignan, Mourvèdre, and Syrah.

From newcomers like Cheramie Law of Cheramie Wine and Bo Salling of Texoir Wines, to those with generations of history in the region, Texas High Plains winemakers are creating award-winning wine in restored historic spaces.

Local growers and winemakers say that the iconic landscape of West Texas transcends clichéd stock  images of oil rigs, ranchland and Friday Night Lights. The dry terrain, sandy soil and high heat make for abundance on the vine and in the glass.

Home Videos The WORLD of WINE – Wine News. Cheap wine, tasting notes and cooking with wine The World of Wine – May 2021 … END_OF_DOCUMENT_TOKEN_TO_BE_REPLACED

How to visit Napa Valley on a Budget. In this video Carson and I explain a few ways to enjoy Napa on the cheap. Tip and advice about how to visit Napa … END_OF_DOCUMENT_TOKEN_TO_BE_REPLACED

Home Videos Get To Know Argentina Wine | Wine Folly If you love Malbec, Argentina is your ultimate wine region. But that’s not … END_OF_DOCUMENT_TOKEN_TO_BE_REPLACED