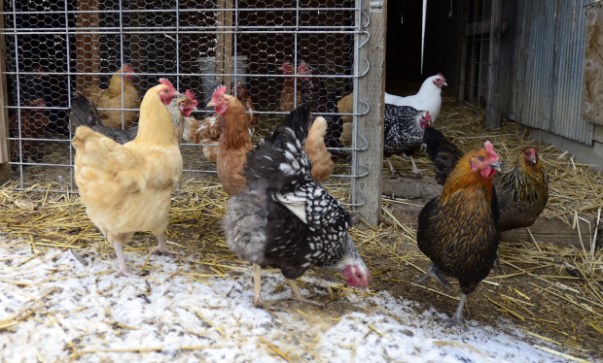 Grant Buchanan, founder and owner of the Longmont farm and catering company GB Culinary Concepts LLC, remembers the moment when he realized the COVID-19 pandemic was serious enough to affect his business — March 11, 2020, when an NBA player tested positive for the coronavirus and the league suspended its season.

“That was when it felt real,” Buchanan said.

That same day, the World Health Organization officially declared a pandemic; within the next week, restaurants and bars in Colorado were closed and state residents were under stay-at- home orders.

For Buchanan and GB Culinary, along with other farms, dairies, vineyards and food producers in the Boulder County-area, that week almost exactly one year ago changed everything — supply chains were interrupted, in-person customers were no longer allowed and businesses had to rapidly adapt to an uncertain, constantly changing new environment. Meat and dairy shortages in grocery stores early in the pandemic made the importance of local food production clearer than ever, but it also pushed those producers to the limits.

“The pandemic highlighted the ramifications of having a centralized, industrialized food system, but local food systems do not get to externalize their costs,” said Brian Coppom, executive director of Boulder County Farmers Markets.

Nearly one year into the pandemic, they’re still adapting, and no one knows what 2021 will look like.

“For the first time in my career, I haven’t put a ton of time into forecasting because it’s hard to know what will happen,” Buchanan said.

Buchanan founded GB Culinary in 2013 as a farm-to-table catering and event business, feeding weddings, corporate events and holiday parties with haute cuisine from meat and produce raised on their own farm. When the pandemic hit, GB Culinary was about to enter its busy wedding season.

“The immediate beginning of lockdown was trying to wrap our heads around shutting down a business that is focused on large events,” Buchanan said. “We were at a complete stop for about eight weeks.”

“It was a dark time for everybody,” Garlich said. “We didn’t know what was going to happen or how deep the hole was going to be.”

Added Merz: “The drop in sales in March and April were incredible.”

At Longmont Dairy, co-owner Katie Herman had been watching news reports as the coronavirus spread from China throughout Europe and crept toward the United States. Near the end of February 2020, she started asking her managers to stock up on as many extra bottles and cleaning supplies as possible to prepare for potential shortages.

“I didn’t necessarily know if it would be a pandemic, but I had a very strong feeling that borders and trade would be affected,” Herman said. “I thought that people in general would become fearful and be stockpiling and hoarding, so we did prepare by ordering a lot of extra supplies.”

What Herman couldn’t predict, however, was the massive increase in order volume and new customers that Longmont Dairy would receive. Herman estimated that the dairy saw three times as many new customers sign up at the beginning of the pandemic compared with a normal spring.

“We have our own cows, and they can only produce so much milk,” Herman said. “We only have so many trucks and employees. It was quite a shock to our system.”

These local food producers quickly had to overcome that shock and adapt their businesses to a world where in-person contact nearly disappeared. Buchanan and his team at GB Culinary had to find uses for all the food they had planted earlier in the year. During a normal year, Buchanan said, they would know at the beginning of a growing season how much produce they had to plant and how much meat they had to raise based on the events they had scheduled for the rest of the year.

During those fateful March weeks when the pandemic hit the U.S. in full force, GB Culinary had already planted, seeded, and composted its fields for its planned 2020 schedule. Then those events were mostly canceled. So GB Culinary had to explore methods of food preservation it had never used before, such as canning and pickling.

GB Culinary also had to adapt on the fly when many meat-harvesting facilities throughout the country became coronavirus hotspots and had to shut down. Some of the meat-processors that GB Culinary regularly used for its animals booked their schedules through late 2022. Buchanan has had to take animals as far as Steamboat Springs and Wyoming for butchering.

Despite those challenges, GB Culinary was able to begin home-delivering meals during lockdown. For a brief window in August and September 2020, it could host events again, but at a much smaller scale than before: never more than 25 to 30 people, never indoors, with tables well-separated.

“We’re very conscious about that stuff,” Buchanan said. “The risks aren’t worth it. If we’re going to do something, do it the right way.”

Garlich and Merz had a similar dilemma with their vineyard tasting rooms. With the increase in sales to liquor stores providing a boost, they first put their tasting-room employees to work in the vineyards, helping them get a better understanding of that side of the business.

“We were determined to keep everyone that we had on staff even though our tasting rooms were shut down,” Garlich said. “It wasn’t the most efficient, but it kept everybody busy and created a camaraderie.”

Early in the pandemic, they also held a full-staff brainstorming session to come up with ideas for how to pivot. Although, as Merz said, “there wasn’t a silver bullet,” some ideas helped boost sales while the tasting rooms were shut down. Bookcliff Vineyards began selling five- bottle tasting sets of their signature wines for people to have virtual wine tastings with their friends.

That was a success, so they expanded on the idea. Bookcliff Vineyards began selling take- home dinners with their tasting sets, accompanied by instructions for which wine to pair with which course. They also sold those sample sets to companies for virtual corporate holiday parties.

When lockdown restrictions were partially lifted, Bookcliff Vineyards was able to reopen its tasting rooms in a limited capacity. In that way, their 2019 opening of a second tasting room in Palisade proved fortuitous: Garlich said that people who wanted to flee dense urban areas for a pandemic vacation flocked to the Palisade tasting room. Garlich and Merz bought a 20-foot-by-20-foot tent to accommodate safe outdoor tasting sessions. They also bought car seat heaters to keep customers warm if the temperature dipped during an outdoor tasting.

At Longmont Dairy, which didn’t have to worry about restrictions on in-person customers, the pressures brought on by the pandemic were slightly different. Before COVID-19 hit, the dairy’s customers were split between those who received milk deliveries and those who picked their products up. When the pandemic began, the majority of their customers became delivery, existing customers ordered more and they experienced an unprecedented volume of new customers. This meant the dairy had to create a months-long waiting list for new customers for the first time as existing customers’ order volume increased.

To keep up with this demand, the dairy increased its herd size by 20 percent and bought six new delivery trucks, Herman said. It also stepped up its delivery schedule. Before the pandemic, the dairy ran one delivery shift per day, always at night. Now it runs three delivery shifts per night and one during the day.

“We had to ration our customers, which we’ve never really done before,” Herman said. “We wanted to make sure existing customers got fulfilled.”

As these businesses move forward into the second — and hopefully final — year of the COVID-19 pandemic, no one knows what to expect. The drive to vaccinate Americans breeds optimism that life could return to normal; the emergence of new coronavirus variants casts doubt on those wishes.

At GB Culinary, Buchanan is bullish on 2021.

“There’s a lot of momentum in the wedding and catering businesses to get back to normal,” he said. “I have high hopes for it.”

Likewise, at Bookcliff Vineyards, Merz and Garlich are hopeful to be back to normal by summer. If normal doesn’t return, local food producers will have no choice but to adapt to changing circumstances in 2021 the same way they did in 2020.

“You just have to adjust to what you’re dealt with,” Merz said.

Home Videos The WORLD of WINE – Wine News. Cheap wine, tasting notes and cooking with wine The World of Wine – May 2021 … END_OF_DOCUMENT_TOKEN_TO_BE_REPLACED

How to visit Napa Valley on a Budget. In this video Carson and I explain a few ways to enjoy Napa on the cheap. Tip and advice about how to visit Napa … END_OF_DOCUMENT_TOKEN_TO_BE_REPLACED

Home Videos Get To Know Argentina Wine | Wine Folly If you love Malbec, Argentina is your ultimate wine region. But that’s not … END_OF_DOCUMENT_TOKEN_TO_BE_REPLACED