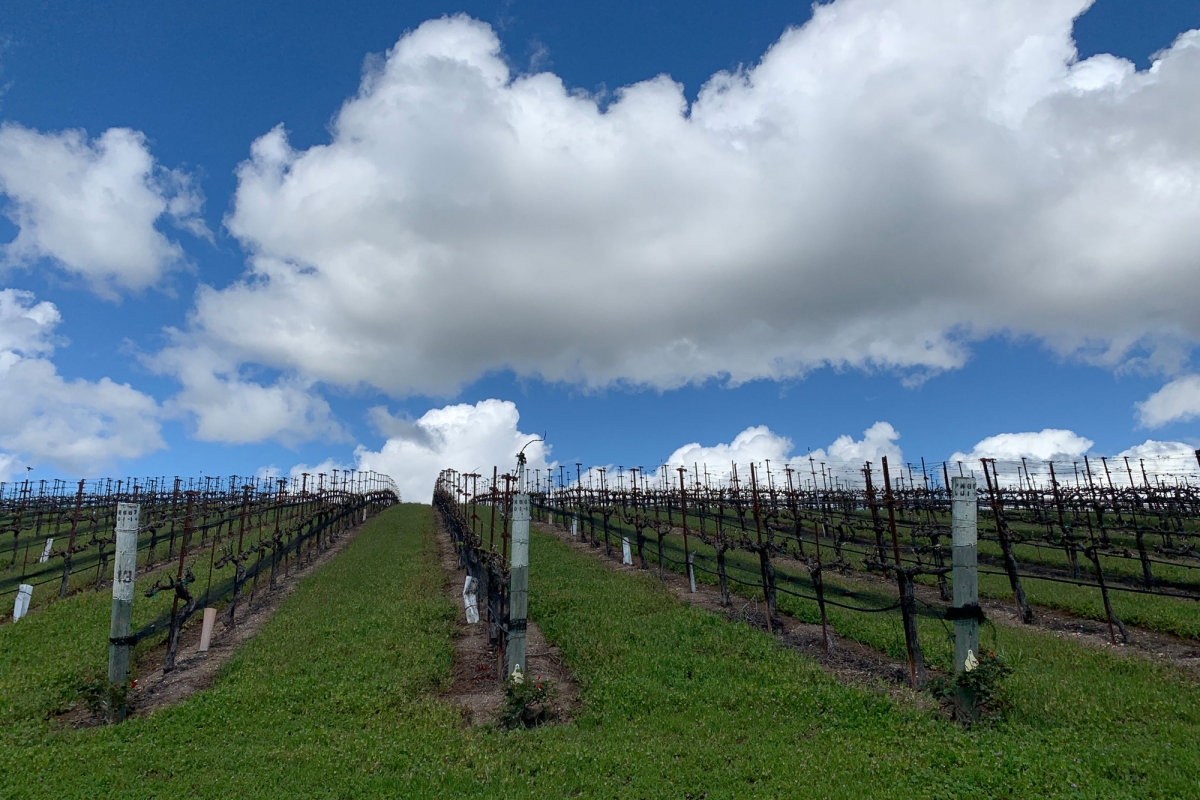 The property is located on West Highway 246, 8 miles east of Lompoc. The listing agent is Bob Jennings, manager of the Los Olivos office of Berkshire Hathaway. The sale price, according to MLS, is $9.75 million.

The Pepes bought the property in December 1994, and in 1996, planted the first chardonnay grapes, followed by pinot noir in 1998.

The first vintage was that of 2000, and the final estate wines were made in 2014, Pepe noted. Hagen was the vineyard manager and winemaker for the duration of the label. Planted are 25 acres of pinot noir and 4 acres of chardonnay.

With the 2015 vintage, she said, the Pepes entered into a 15-year vineyard lease with Hall Wines of Napa, which markets the Clos Pepe grapes under Hall’s Walt Label.

When the Pepes purchased the property, it had a modular home, a hay barn and a large stable. Today, the modular is a guest home with a wood-burning stove, two bedrooms and two baths. From 2003 to 2005, the Pepes converted the stable into a 7,500-square-foot home, and have resided in it ever since. An orchard of olive trees encompasses 3-plus acres.

Among the home’s other features are a formal dining room that seats 20, a large living room, five wood-burning fireplaces and a library/office. The kitchen has an eat-in nook for six, a large island with an eating bar, and is outfitted with Wolf ovens and a Viking six-burner range.

Upstairs is one of the en suite bedrooms and a large great room with a small kitchen.

The home is built in a U-shape around a lap pool, a hot tub and a large patio area with tables and chairs for 18, a wood-burning pizza oven and an outdoor kitchen.

Over the years, I’ve attended several wine tastings and events at Clos Pepe, and despite its grandeur found the home to be welcoming. However, true story: I once made a wrong turn and ended up momentarily lost.

“We designed the house to be comfortable and kid- and dog-friendly,” Pepe said. “The house has amazing views from nearly every window, so you know you’re in a vineyard, in the midst of Tuscan-like rolling hills.”

Two new restaurants are opening their doors in Solvang. Both new eateries are in buildings that formerly housed other restaurants.

The first, Coast Range, bills itself as a Central Coast steakhouse and seafood dinner-only eatery with a full cocktail bar as well as a daytime café and pastry program.

Coast Range will open in stages in April starting with its Vaquero Bar and outdoor patio dining. Coast Range will be located in the former Mandarin Touch Restaurant, 1635 Mission Drive, across from Solvang Park.

The Vaquero Bar will offer cocktails, local wines and craft beers with a casual bar food menu that will highlight farms, ranches and seafood from the Central Coast as well as proprietary products from the owner’s Santa Ynez Ranch, Coast Range Ranch.

“They say there’s always a silver lining. While 2020 brought challenges, it also allowed us to assemble a world-class team of chefs and find the perfect space to showcase our talents in a part of the world we love,” Carron said.

The founders of Coast Range are longtime friends and business partners who first worked together more than a decade ago and now all call the Santa Ynez Valley home.

Carron was the executive chef for Michael Mina for many years, and went on to found 800 Degrees Pizza and Top Round, two Los Angeles-based casual dining brands with a global reach.

Fretz, also a co-founder of Top Round, opened Church Key in L.A. and, working with some of the nation’s top kitchens, has teamed with Mina, David Burke and Curtis Stone.

Carson, a pastry chef and recent finalist for a James Beard Award, recently was chef and owner of Bon Temps in downtown L.A. Its acclaim included a “Best New Restaurant” from Los Angeles Magazine, the Los Angeles Times, TimeOutLA, Esquire and Food & Wine.

Also on the team is partner Hillary Calhoun, a marketing professional who will oversee publicity, events and catering for Coast Range, and general manager and mixologist Joseph Sabato, who has worked in many restaurants, among them The Bazaar by José Andrés, XIV by Michael Mina and Ortolan.

While the Vaquero Bar and patio will open in April, the main restaurant and café will open later this year. For updates, follow Coast Range on Instagram, @coastrangerestaurant.

Already open and earning rave reviews is Sear Steakhouse, located in the former K’Syrah Catering & Events site at 478 Fourth Place (at the corner of Copenhagen).

Sear will source ingredients for its food and drink menus from the team’s own properties — Sear Farm and Roblar Farm, both also in the Santa Ynez Valley. Sear Farm is hand-farmed and planted with more than 100 varieties of vegetables, fruits and herbs. The eatery’s steaks will come from a single-sourced Colorado farm, the USDA Prime and Choice beef from neighboring ranches and seafood from local waters.

At the helm at Sear is Executive Chef Erik Dandee, a native of Vancouver, Washington, who brings nearly two decades of restaurant experience that began when he was a dishwasher at a family-owned steakhouse. Among Dandee’s various gigs were stints in Portland and Palm Springs, the now-shuttered Wolfgang Puck Kitchen + Bar and at Birba in the Alcazar Hotel. Early in 2019, Dandee competed on Food Network Canada’s “Fire Masters,” a grilling talent competition show.

“Due to the events of this past year, our catering platform faced so many limitations. But we still had our farms, and we were still floating the idea of opening a restaurant in K’Syrah’s Solvang space. We just needed that final push, which we received in the form of two great additions to this business: Alberto and Chef Erik,” Jimmy Loizides said.

Sear Steakhouse aims to bolster Solvang’s nightlife with a late-night food menu on Friday and Saturday evenings, as the restaurant and bar remain open until 2 a.m. Once indoor dining is again permitted, Sear will accommodate seating for 150 in both indoor and patio seating.

The Vineyard Team of San Luis Obispo County will accept applications for its educational scholarship program through March 31.

Applications are available to 2021 high school seniors and college students whose parent(s) or guardian(s) are vineyard or cellar workers, employed or contracted by a member of the Vineyard Team.

Scholarships are awarded based on academic excellence, financial need and community involvement. Awards will range from $500 to $5,000 per student.

Since its inception in 2015, the fund has awarded more than $96,000 in higher-education scholarships. Many recipients have been first-generation college students.

Since he comes from a low-income family, “this scholarship is not only for me but for my parents, who work long hours from early in the morning to late in the afternoon,” said Oscar, a 2020 recipient who now attends California State University-Fresno.

To apply, visit vineyardteam.org/scholarship. Applications must be received no later than March 31. For more information or questions, email [email protected].

The Vineyard Team is a 501(c)3 nonprofit grower-group dedicated to sustainable winegrowing since 1994. For more than 20 years, it has built a network of 300 local farmers, educating and guiding toward sustainable vineyard practices.

— Laurie Jervis tweets at @lauriejervis and can be reached via [email protected]. The opinions expressed are her own.

Home Videos The WORLD of WINE – Wine News. Cheap wine, tasting notes and cooking with wine The World of Wine – May 2021 … END_OF_DOCUMENT_TOKEN_TO_BE_REPLACED

How to visit Napa Valley on a Budget. In this video Carson and I explain a few ways to enjoy Napa on the cheap. Tip and advice about how to visit Napa … END_OF_DOCUMENT_TOKEN_TO_BE_REPLACED

Home Videos Get To Know Argentina Wine | Wine Folly If you love Malbec, Argentina is your ultimate wine region. But that’s not … END_OF_DOCUMENT_TOKEN_TO_BE_REPLACED