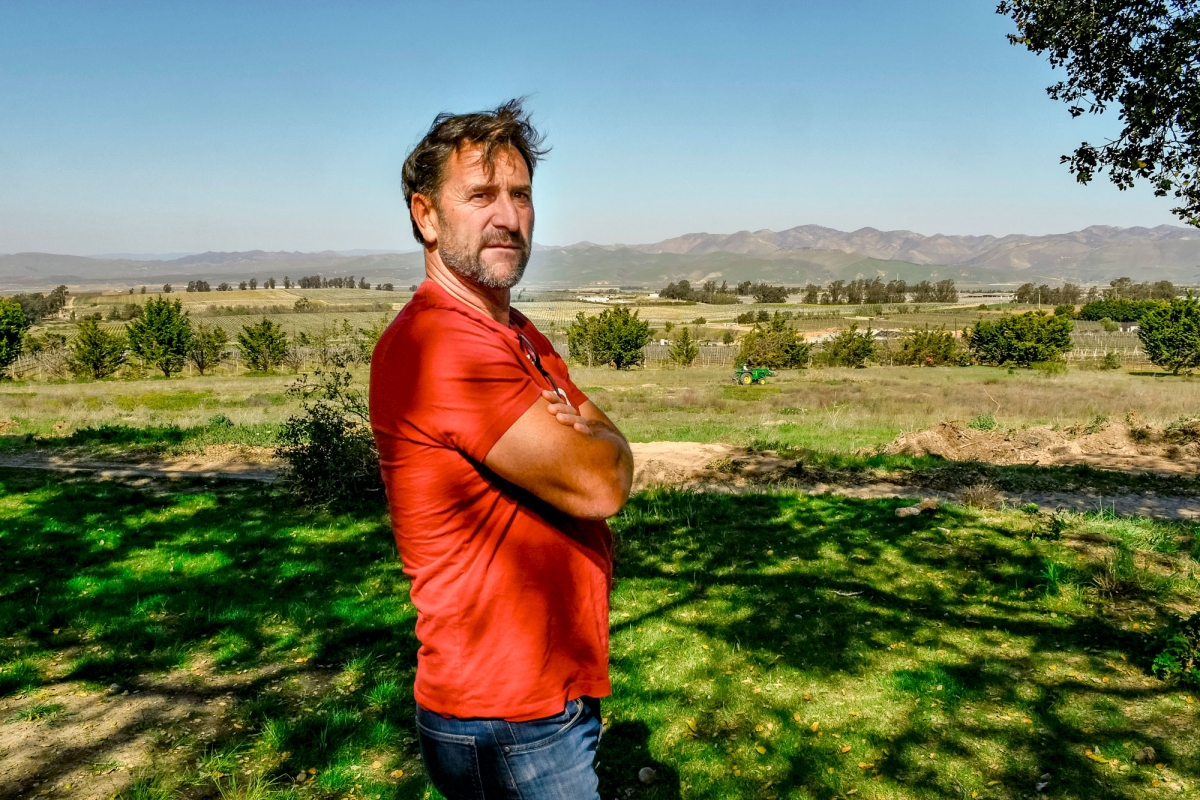 [Noozhawk’s note: In early February, Will Henry told Noozhawk that he was about to plant the first estate vineyard for Lumen Wines, the label he co-owns and produces with Lane Tanner, and we jumped at the chance to document the process from Day One. Following is the first in a series about the life of a new vineyard by Noozhawk contributing writer Laurie Jervis and photographer Len Wood.]

When Will Henry plants pinot noir vines in the ground surrounding his home early next month, it will be a step greater than creating the first estate vineyard for Lumen Wines, the label he co-owns and crafts with Lane Tanner.

Henry will also be honoring the legacy of his late father, businessman Warner Henry, founder of the Henry Wine Group, a wine aficionado and longtime philanthropist for classical music in greater Los Angeles.

Last week, while talking outside on his 11-acre site just south of East Clark Avenue east of Orcutt, Henry said planting the vineyard will be “a big learning experience for me. My dad always dreamed of doing this, but never pulled the trigger. This place is honoring his legacy.”

With his father’s help, Henry and his wife, Kali Kopley, purchased the property in 2018. Their home sits on a gentle rise overlooking the acreage soon to become a vineyard.

One 3½-acre parcel faces north; the other slopes south from the driveway to the property’s southern edge for a total of 1½ acres, Henry said.

There are a few hurdles to clear before vines go into the ground: Soil gets tested, and amended with nutrients to improve its properties. The site has never before been farmed, Henry said.

“We dug test pits — many pits — going down hundreds of feet,” he told Noozhawk.

A farmworker clears brush in the area that will become the north section of the Warner Henry Vineyard near Orcutt. In the distance are neighboring vineyards, including Presqu’ile. (Len Wood / Noozhawk photo)

Lime, gypsum and organic compost were added to the soil.

The property’s soil is “deep and uniform sand,” Henry said. It likely harkens back to a time when the Pacific Ocean covered what is now the Santa Maria Valley.

Sandy soil is revered for how water drains through it, and “pinot noir loves great drainage because the vines need to struggle for water,” Henry noted.

“Pinot noir is the obvious choice to plant here,” and besides, the grape varietal is his and Tanner’s favorite, and was his father’s, as well.

“It’s the most expressive choice for our climate here,” he said.

In the nearly three years that Henry, his wife and their daughter, 5-year-old Winslow, have lived on the property, he says he’s learned “the particulars of the weather, how it changes throughout the day.” Every afternoon, a breeze kicks up, which helps dry out any residual moisture, and helps cool down temperatures, he explained.

Warner Henry was born in Los Angeles in 1938. He attended Stanford University, served in the Navy, and then returned to Stanford to earn an MBA.

He joined the company founded by his father during the Great Depression. That company, Henry Roof Coatings, developed into a well-known business with roof repair products still readily available today, Will Henry said.

It was at Stanford that Warner Henry first discovered wine, his son recalled.

“His passion grew, and he saw a need to honor small, family winemakers” who might lack the time and resources to distribute their products. So in 1985, Warner founded The Henry Wine Group, California’s first midsize wine distribution firm, Will noted.

Following a stint at Leeuwin Estate in the Margaret River region of Australia, Will returned to join Warner in the family business, eventually serving as vice president of business development, concentrating on brand management for Central Coast wineries. In 2012, Henry and Tanner launched Lumen Wines.

Kopley and Henry also own Pico at the Los Alamos General Store, a restaurant that Wine Enthusiast included in its 2019 “Top 100 Restaurants in America.” The restaurant, at 458 Bell St. in Los Alamos, doubles as a tasting room for Lumen.

Will Henry walks in sandy soil on the south side of the Orcutt area property that will become Warner Henry Vineyard. (Len Wood / Noozhawk photo)

With the owners of Black Sheep Restaurant at 26 E. Ortega St. in downtown Santa Barbara, Will and Kali opened The Wine Shepherd next door. But the site was an early victim of the COVID-19 pandemic, and Black Sheep took back the space in the spring of last year, Henry said.

Lumen’s current production is between 2,000 and 3,000 cases, Henry said. Like most smaller winemakers, Lumen sources fruit from other Santa Maria Valley vineyards, among them Martian Ranch, Portico Hills, Presqu’ile and Sierra Madre.

The latter two vineyards are visible from Henry’s home and the Warner Henry Vineyard, as is the eastern edge of Solomon Hills Vineyard.

In comparison to his neighbors, Warner Henry — at five acres — will be “very small,” yet in time, the vineyard could easily produce enough pinot noir for Lumen Wines, Henry noted. As a general rule, a vineyard’s third leaf — third year — marks the start of viable grapes.

Standing on the site that bears his father’s name, Henry recalled the first wine “that knocked my father’s socks off.”

It was the 1976 Sanford & Benedict Pinot Noir from the original Sanford Winery.

“Richard (Sanford) told me that Sanford & Benedict Vineyard was planted in 1973, which means that wine came from vines only in their third leaf,” Henry said.

In recent years, Will and Warner shared another bottle of that same vintage, now more than 40 years old, and “it was still great,” Henry said.

— Laurie Jervis is a Noozhawk columnist. She tweets at @lauriejervis and can be reached via [email protected]. Click here for previous columns. The opinions expressed are her own.

Home Videos The WORLD of WINE – Wine News. Cheap wine, tasting notes and cooking with wine The World of Wine – May 2021 … END_OF_DOCUMENT_TOKEN_TO_BE_REPLACED

How to visit Napa Valley on a Budget. In this video Carson and I explain a few ways to enjoy Napa on the cheap. Tip and advice about how to visit Napa … END_OF_DOCUMENT_TOKEN_TO_BE_REPLACED

Home Videos Get To Know Argentina Wine | Wine Folly If you love Malbec, Argentina is your ultimate wine region. But that’s not … END_OF_DOCUMENT_TOKEN_TO_BE_REPLACED