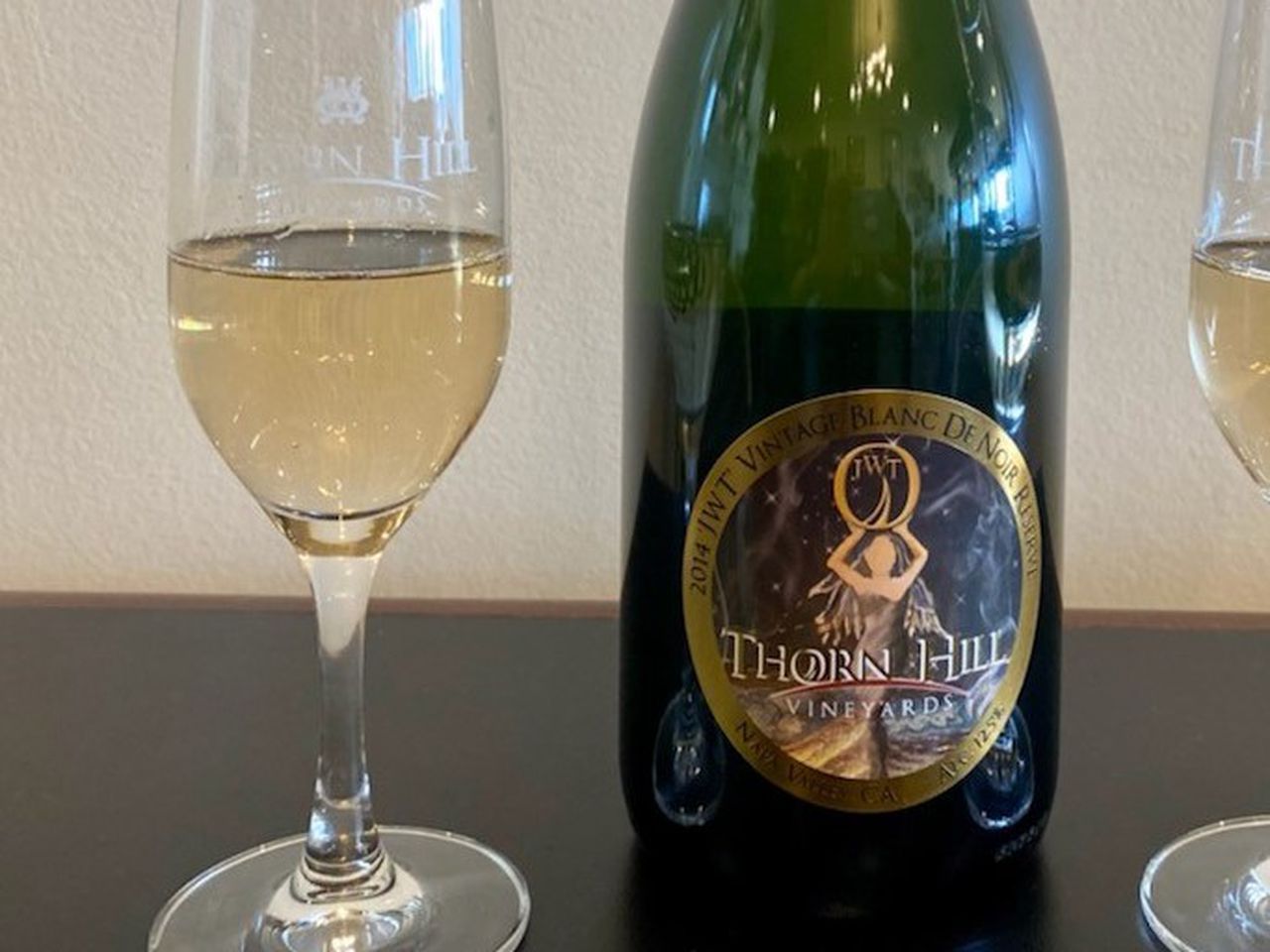 Amy Thorn has unveiled other Thorn Hill sparkling wines in the past.

For years the winemaker for the Lancaster, Pennsylvania, producer that sources its grapes from several California counties has made a Brut Cuvée de Prestige, a blend of 60 percent Pinot Noir and 40 percent Chardonnay from the Carneros American Viticultural Area (AVA).

At the second of this year’s release parties, scheduled for 6 to 9 p.m. Friday at the Lancaster tasting room at 1945 Fruitville Pike, she’ll show off a bubby that has its roots in another memorable California vintage, one not involving fires. Tickets for the event are still available and can be purchased at this link.

“I always had this dream that I wanted to make a single-varietal, single-vineyard, and of all the Dijon clones, which are the Pinot Noir clones, Pommard is my favorite,” she said during a recent Zoom interview. “So in 2014, which was the year of the big earthquake – that was the earth-rocking experience ­– every year we have some major seismic event going on out there.

“So this wine was born out of that. I just decided that I was going to take the Pommard clone and make a 100 percent Pinot Noir sparkling wine. But, to do that, when you have that quality of fruit, I wanted it to age a very, very long time.”

The 2014 “JWT” Vintage Blanc de Noir Reserve spent 60 months in bottle, but more than wine spent time aging in that bottle. There are the memories of the late-August 2014 earthquake, which caused damage to older wines that were maturing in barrels as opposed to spoiling any of the grapes harvested that year. It also was a summer and fall that Jonathan Thorn, Amy and husband Jack’s late son, spent days taking grapes off the vine. “He helped me pick the grapes,” Amy remembered, noting that sparkling was her son’s favorite. Jonathan died in a car accident in Napa County in November 2019. His initials have been included in the name of this bubbly.

“I just really wanted to have a bottle of wine that honors Jonathan,” she said. “When we’d get together we would drink sparkling wine. He was fascinated with the process, the champenoise process. He was there for all of the aspects as we sort of birthed this one together.”

Last fall she talked about making her first blend called Big Magic out of a vintage that saw major fires across wine country. Now there’s this wine, attached by vintage to the worst earthquake in California in 25 years that caused an estimated $50 million in damage to the wine industry.

“You know my philosophy,” she said, “that something positive always comes out of a negative. You just have to look for it. And so, for me, the ‘JWT’ in that 2014 year is what I’d consider my crowning achievement as a winemaker is really embodied in this. I’m quite proud of it.”

That will be joined at the release party by Thorn’s Alchemy Cabernet Sauvignon, a product of Clone 337 grapes from vines planted in the volcanic vineyards of Lake Country’s Red Hills.

Similar to the sparkling, she has made plenty of Cabernet Sauvignon. You can take one look at the winery’s portfolio and find a variety of them. But this was her first shot at making a 100 percent varietal out of the clone, which she calls her favorite.

“It’s big, it’s bold, it has unbelievable intense flavors, and it comes from our particular estate there in Lake County,” she said. “Again, in 2017, that was also the year I made Big Magic and I made some standout wines that year, but I really decided I was going to take this clone and age it a little bit longer in French barrels and I wanted people to experience [the clone]. I wanted them to understand why it’s my favorite clone.”

Thorn said the Clone 337 grapes escaped the fires and the smoke taint, and that she had more to source with several new vineyards reaching the point where they could provide some fruit to harvest. It’s a clone she has used in all her other Cabs in the past.

“I just took that clone out early,” she said. “because I just knew what my intent was going to be, that I was going to take this clone and make a distinctive wine. I’ve been wanting to do that for probably 10 years, but I hadn’t done it.

“It was exciting, it was a combination of what I love. It is obviously grown there in the Red Hills. I think that volcanic soul lends itself to 337. I have had it in other terroirs. I still like it. The clone is very distinctive. But I think when it’s grown at a high elevation in volcanic soil, it’s alchemy. It’s magic. It’s magic in your mouth.”

One other new product that’s available in the tasting room is the Legacy Estate Olive Oil. It is flying off the shelf, she said, a development gratifying for several reasons beginning with the fact that Jonathan planted the olive trees.

The entire production process, she said, has been educational,

“With wine, there’s a lot of waste. You have the grape, the seeds, you have everything, and there’s just a little juice that comes out to make the wine. But with olives, there’s even less. You need so many more olives to just get that one tablespoon of olive oil. You don’t realize that until you actually start making them. You look and you have all this tonnage and you see the yields, and you’re like, wow, that’s something

“But the flavors are just so beautiful. We harvested them in 2019 and we harvested most of the olives as late as December,” she said. “So it gave this incredible butteriness to the fruit and the varietals brought a little of that pepper. So it’s like the perfect combination; it’s smooth, it’s like having melted butter in your mouth and has a peppery finish.”

ALSO READ: Clover Hill Winery owners look at 2021 as a chance ‘to reinvent ourselves as a family and a business’

Home Videos The WORLD of WINE – Wine News. Cheap wine, tasting notes and cooking with wine The World of Wine – May 2021 … END_OF_DOCUMENT_TOKEN_TO_BE_REPLACED

How to visit Napa Valley on a Budget. In this video Carson and I explain a few ways to enjoy Napa on the cheap. Tip and advice about how to visit Napa … END_OF_DOCUMENT_TOKEN_TO_BE_REPLACED

Home Videos Get To Know Argentina Wine | Wine Folly If you love Malbec, Argentina is your ultimate wine region. But that’s not … END_OF_DOCUMENT_TOKEN_TO_BE_REPLACED