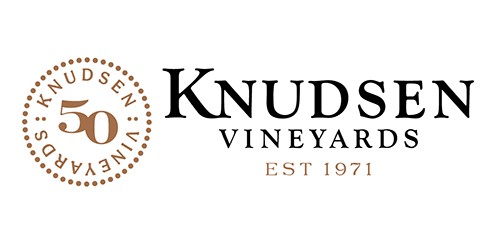 Dundee, OR. (February 24, 2021) — Knudsen Vineyards celebrates its 50th anniversary this year, launching an interview series with wine luminaries interwoven in the story of this Willamette Valley pioneer. Entitled The Outlook from Knudsen Vineyards: Reflecting on the past, present and future of Oregon’s Dundee Hills, the series includes Brian Croser (owner of Tapanappa in Australia’s Adelaide Hills), Véronique Drouhin (winemaker at Maison Joseph Drouhin in Burgundy and Domaine Drouhin Oregon), Rollin Soles (winemaker at ROCO Winery in the Willamette Valley), and others. The virtual event series begins on March 9 with Dick Erath, founder of the eponymous winery Erath.

Moderated by storyteller and podcast host Brian Bushlach, and hosted by Page Knudsen Cowles, The Outlook from Knudsen Vineyards features guests who played a role in this storied winegrowing venture that began 50 years ago. The series will also focus on the evolution of the Willamette Valley as a world-class winemaking region, chronicling the early days of a burgeoning wine industry, while also speaking to its future.

“We’re honored to have so many Oregon wine pioneers we admire and with whom we share meaningful relationships join us in celebrating this milestone,” said Page Knudsen Cowles, Managing Partner of Knudsen Vineyards, whose parents founded Knudsen Vineyards in 1971. “While this interview series will celebrate and document the past, we also want to mark this special anniversary by looking ahead.”

The virtual series takes place every second Tuesday of the month, from March through August. Local winemakers participating in the series will also be featured as guest wineries at Knudsen Vineyards’ tasting room on the Saturday following their respective broadcast. A full schedule and episode descriptions can be found below.

Attendance is complimentary and registration is available for single episodes or for the full series. Registration and more information can be found on the series webpage:
https://knudsenvineyards.com/virtual-series/

Episode 1: A Conversation with Dick Erath

Starting where it all began, our first episode celebrating the 50th Anniversary of Knudsen Vineyards, invites wine legend Dick Erath to reflect on his longtime partnership with Cal Knudsen. Together, in 1972, Dick and Cal started the most ambitious vineyard planting of its time in the Dundee Hills, reaching more than 50 acres in just the first three years. The two shared a vision and saw the incredible potential of the region—a region they would help shape through the founding of Knudsen Erath Winery, the first in the Dundee Hills. Join us for this conversation with one of the most important pioneers in Oregon’s wine history.

Episode 2: A Conversation with Rollin Soles

A Champagne-loving winemaker from Texas is one of the most recognized winemakers in Oregon. Rollin Soles, as the winemaker and founder at Argyle Winery, came to know Cal Knudsen and Knudsen Vineyards in 1986. Rollin’s sparkling wines at Argyle were garnering praise from around the world, and Cal quickly became a mentor and a friend. Their kinship led to Knudsen Vineyards becoming Argyle’s founding vineyard, a relationship that continues to this day. Today, Rollin is the winemaker at ROCO Winery which produces beautiful Pinot noir and Chardonnay wines, including a vineyard designate from Knudsen Vineyards fruit.

Episode 3: A conversation with Alison and Alex Sokol Blosser

This year the Sokol Blosser family is also celebrating their 50th Anniversary as grape growers and winemakers in the Willamette Valley. This conversation with Alison Sokol Blosser and Alex Sokol Blosser, siblings and co-Presidents, will chronicle the parallels and intersecting trajectories of the two Dundee Hills wineries and the second generations leading them. This conversation will include the reveal of an exciting forthcoming collaboration between the two families.

Episode 4: A Conversation with Véronique Boss-Drouhin

In 1987, when Burgundy’s famed Maison Joseph Drouhin purchased 100 acres in the Dundee Hills to grow Pinot noir, Cal Knudsen knew that the Willamette Valley was destined for greatness. Cal had enormous respect for Robert Drouhin and admired the exceptional quality and elegance of Drouhin wines from Burgundy, Chablis and now Oregon. Today, Robert’s daughter, the talented winemaker Véronique Boss-Drouhin, joins her family in stewardship of Domaine Drouhin Oregon. Veronique has made more than 30 wine vintages in both France and Oregon, and is considered an icon in both. In 2019, she was awarded the Légion d’Honneur, France’s highest award of merit. Theirs is a legacy that has fostered a camaraderie between Burgundy and Oregon that has elevated Oregon’s Willamette Valley wine region. Véronique joins us live from Burgundy, France to share stories about her family’s early and ongoing commitment to Oregon.

Episode 5: A Conversation with Allen and Jackson Holstein

Allen Holstein is widely recognized as one of the leading viticulturalists in Oregon. He commenced his grape growing career in 1980 working as vineyard manager at Knudsen Vineyards where he planted and replanted nearly 200 acres over his 40-year affiliation. Knudsen Vineyards is a thoughtfully assembled collection of vine blocks planted at different elevations, with different spacing, row orientation, and clonal types and Allen is intimately familiar with all of its expressions. His son, Jackson Holstein, grew up among the vines at Knudsen Vineyards and makes wine under his own label, Granville Wines—including a bottling from our vineyard. The wine business is a family affair, and we hope you’ll join us for this reunion.

Episode 6: A Conversation with Brian Croser

Brian Croser is a famed Australian viticulturalist and winemaker who founded Petaluma Wines in 1976, an award-winning winery in the Adelaide Hills. In 1986, Brian was drawn to Oregon to create, with Rollin Soles, sparkling wine titan Argyle Winery. They quickly teamed up with Cal Knudsen, engaging Knudsen Vineyards as Argyle’s founding fruit source. Cal later became a partial owner and Chairman of Argyle. Brian is currently the owner and winemaker at Tapanappa in Australia, a partnership with the Bollinger family of Champagne and the Cazes family of Lynch Bages in Bordeaux’s Pauillac commune. Brian joins us live from Australia to share stories about Cal Knudsen and the early days of Oregon’s sparkling wine fame.

Home Videos The WORLD of WINE – Wine News. Cheap wine, tasting notes and cooking with wine The World of Wine – May 2021 … END_OF_DOCUMENT_TOKEN_TO_BE_REPLACED

How to visit Napa Valley on a Budget. In this video Carson and I explain a few ways to enjoy Napa on the cheap. Tip and advice about how to visit Napa … END_OF_DOCUMENT_TOKEN_TO_BE_REPLACED

Home Videos Get To Know Argentina Wine | Wine Folly If you love Malbec, Argentina is your ultimate wine region. But that’s not … END_OF_DOCUMENT_TOKEN_TO_BE_REPLACED