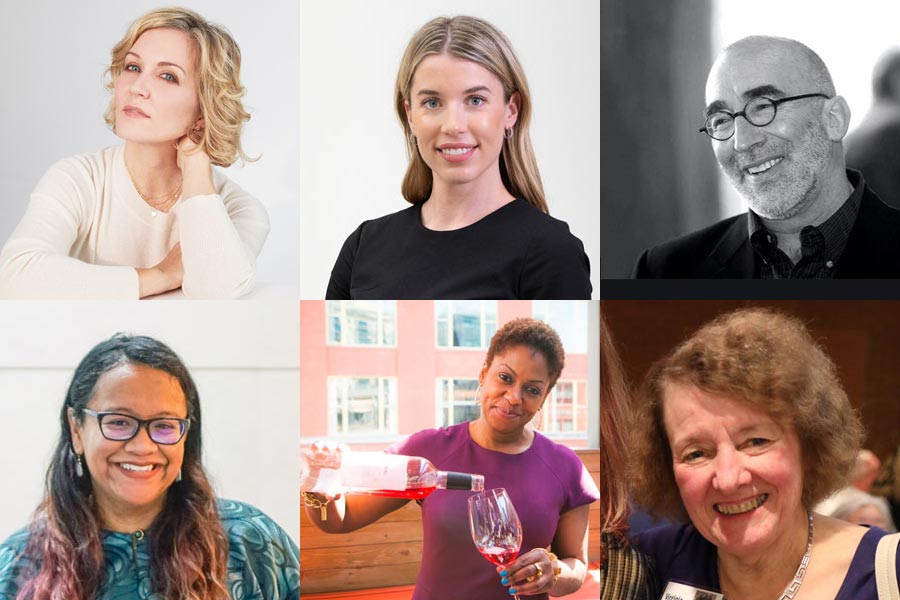 For the first time ever, thousands of Knox alumni and friends will have the opportunity to join the celebration when six individuals are honored as Alumni Achievement Award winners on Friday, February 12, at 5 p.m. Central Time.

There’s no need to make travel arrangements. While the Alumni Achievement Awards ceremony usually takes place on the Knox campus, this year’s event has moved online because of the COVID-19 pandemic. Anyone with an Internet connection and a computer or smartphone will be able to watch.

Amy Carlson ’90 is an Emmy-nominated actor in television and movies, known for playing strong female characters such as Linda Reagan in the CBS series Blue Bloods and Alex Taylor in the NBC series Third Watch. Her film credits include Too Big to Fail, Green Lantern, and the indie film Everything Put Together. In her personal life, she actively supports humanitarian causes and charities focused on women and mothers. She has assisted with Hurricane Sandy relief, lobbied Congress on behalf of people suffering from myalgic encephalomyelitis/chronic fatigue syndrome (ME/CFS), and participated in Habitat for Humanity builds.

Leah Heister Burton ’08, who is receiving the Young Alumni Achievement Award, is deputy director and chief advancement officer for the Solomon R. Guggenheim Museum and Foundation. She also serves as a part-time lecturer at Columbia University, teaching in its master’s degree program for nonprofit management. She previously served as interim regional director and associate director for ALSAC/St. Jude Children’s Research Hospital in New York, where she oversaw fundraising initiatives for the greater New York and New Jersey area in support of the hospital, and was director of development for St. Mary’s Healthcare System for Children.

Otto “Casey” Jones ’87 has devoted his life to helping others as a nurse and educator. He has served twice in the Peace Corps—once in Guatemala shortly after graduating from Knox and a second time in 2016, when he established a nursing education at Muni University in Uganda and helped teach and graduate its first class of nurses. He has extensive experience as a nurse working in ICU environments and in palliative care and as a nursing educator, most recently at University of Colorado, Colorado Springs. At University of Colorado Health Memorial Central Hospital, he serves in one of the busiest COVID-19 units in the state and helped train nurses there on new treatment protocols.

Melati Nungsari ’10, who is receiving a Young Alumni Achievement Award, is an assistant professor of economics at the Asia School of Business in Kuala Lumpur, Malaysia. She also holds an appointment as a research affiliate at the Massachusetts Institute of Technology’s Sloan School of Management. An applied microeconomist, she has several research interests, including labor and social integration issues surrounding the refugee community in Southeast Asia. She works directly with refugee communities to document the problems they face and test potential systemic improvement, and she has organized dialogue and collaboration among academics, NGOs, and governmental agencies.

Regine Rousseau ’95 owns Shall We Wine, a wine, spirits, and beer-tasting company in Chicago, Illinois, that provides demonstrations and hosts private and public wine-tasting events across the nation. Her interest in wine is the direct result of her Knox study abroad experience in Besançon, France. In addition to being an entrepreneur, she collects art, writes a wine column, and has authored a book of poetry, Searching for Cloves and Lillies. As CEO of Shall We Wine, she leads a team of passionate wine specialists who, like her, enjoy sharing their knowledge and love of wine. She also spends time helping students and young professionals as a mentor and motivational speaker.

Virginia Steen ’69 is a professor of medicine at Georgetown University, where she serves as fellowship director of the rheumatology division and as a primary care physician for patients who have systemic scleroderma. She is an internationally renowned expert in the study and treatment of scleroderma, an autoimmune condition affecting the skin, connective tissues, and internal organs. She also serves as a consultant at the National Institutes of Health and is the coordinating investigator for a 15-year observational study of more than 500 scleroderma patients. Working with another researcher, she developed the first worldwide registry and database for patients with systemic scleroderma.

Home Videos The WORLD of WINE – Wine News. Cheap wine, tasting notes and cooking with wine The World of Wine – May 2021 … END_OF_DOCUMENT_TOKEN_TO_BE_REPLACED

How to visit Napa Valley on a Budget. In this video Carson and I explain a few ways to enjoy Napa on the cheap. Tip and advice about how to visit Napa … END_OF_DOCUMENT_TOKEN_TO_BE_REPLACED

Home Videos Get To Know Argentina Wine | Wine Folly If you love Malbec, Argentina is your ultimate wine region. But that’s not … END_OF_DOCUMENT_TOKEN_TO_BE_REPLACED