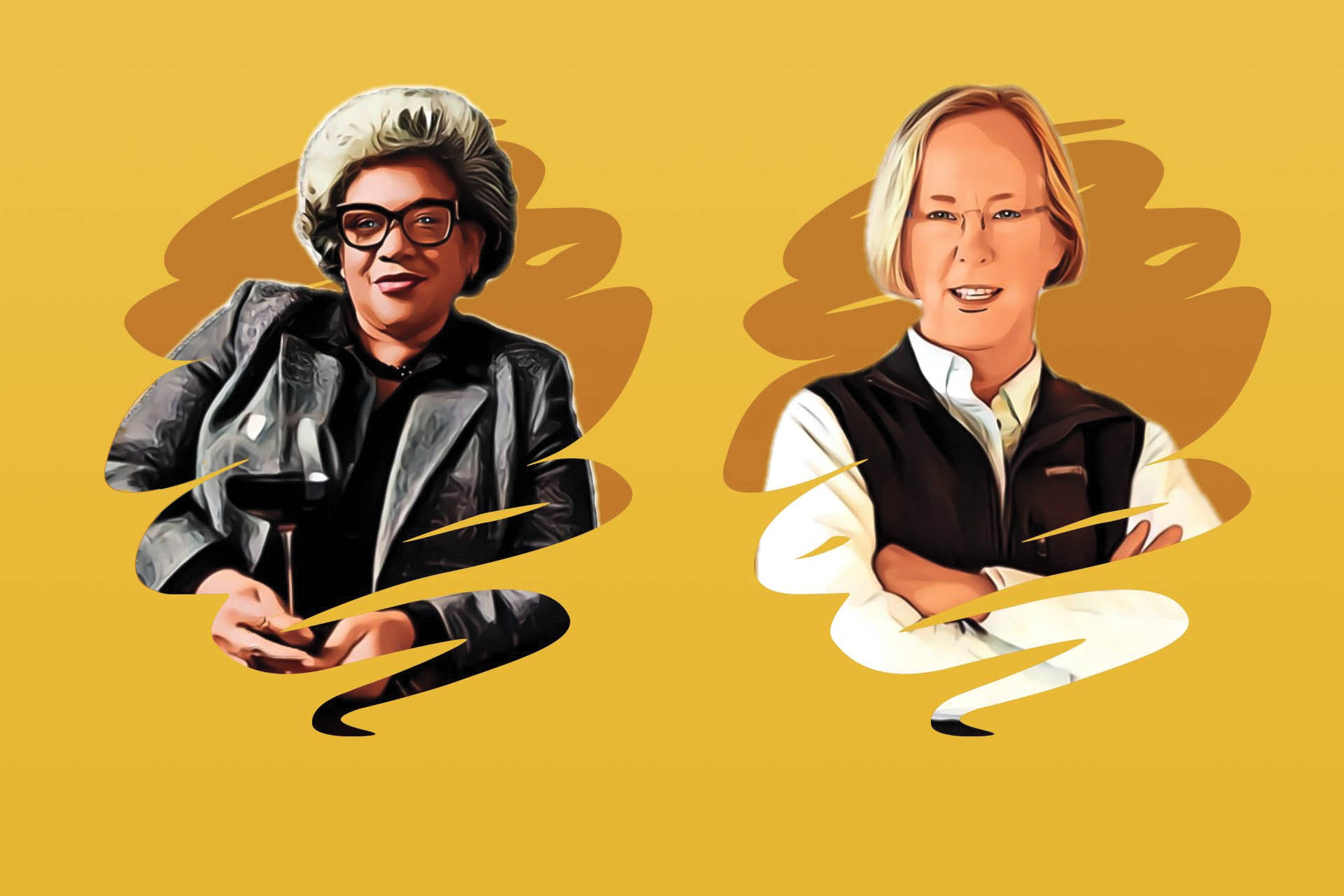 From the vines to the lab, tasting table, boardroom and beyond, women have long made waves in wine production. They’ve developed farming techniques, proved yeast’s impact and connected clonal specificity to terroir; they’ve built businesses and brands to share research, and created quality wines for all palates. However, they’ve also faced incredible adversity within the wine world simply because of their biological gender.

In recent years, such struggles have increasingly been highlighted by the media. And thanks largely to the work and counsel of female pioneers before them, so, too, have several of women’s vinous accomplishments. This recognition may be a significant stride toward equality in the industry, but crucial conversations around diversity and inclusion remain and mustn’t be overlooked.

To explore how wine business hurdles, and perspectives of those encountering them, have and have not changed over time, consider the paths taken by nine very different U.S. women winemakers.

Theodora Lee, owner and vintner at Theopolis Vineyards in Mendocino, CA, studied law initially, and had a successful career as a senior partner and trial lawyer with Littler Mendelson P.C. Lee has worked in the industry for 17 years.

“I started in the tasting room at Rosenblum Cellars in Alameda [California] and quickly became one of the tasting room managers,” says Shalini Sekhar, who studied music education and music performance. Sekhar, the winemaker and owner at Ottavino Wines San Francisco Bay Area, has been in the industry for 15 years.

“Wine is the result of a collaboration between many living systems,” says Cathy Corison. “That pulled me in as a biologist.” Corison has a bachelors in biology and masters degrees in food science and enology. She has been in the industry for 42 years and is the winemaker and founding partner at Corison Winery in St. Helena, CA.

“This field is the best way to combine [creative arts and sciences]… I worked for Lisa Van de Water at the Wine Lab in St. Helena in 1976 [and] was her first employee,” says Carol Shelton, who holds a degree in fermentation science. She is the winemaker, president and co-owner of Carol Shelton Wines in Santa Rosa, CA and has been in the industry for 44 years.

“I learned from working in restaurants… I wanted to travel and explore through the lens of wine… I wasn’t sure where exactly that would take me professionally.” says Rae Wilson, who studied music and photography. Wilson has been working in the industry for 13 years. She’s the winemaker and owner at Wine for the People in Austin, TX.

Leah Jorgensen, who has worked in wine for 20 years, earned a degree in English literature and creative writing followed by a postgraduate degree in holistic nutrition. She is the owner and winemaker at Leah Jorgensen Cellars in Newberg, OR.

For those who started in wine earlier, some of the biggest perceived challenges included assumptions based on appearance and forming or maintaining a family. These impediments continue to face women today.

“I had to sit on a buyer’s lap if I wanted him to take my weekly order,” says Jorgensen. “Meanwhile, a line of sales reps from other distributors, all male, watched and yucked it up”

“Being small and blonde [has been a challenge]. I heard the phrase ‘that little blonde in the lab’ too many times,” says Shelton.

“If you want to have a family it is hard to combine, especially in production and during harvest,” says Anne Moller-Racke, owner of Blue Farm Wines in Sonoma, CA. She’s been in the industry for 39 years.

“People have an image of a male winemaker or maybe a young, tall and slim woman—I am none of the above and they assume that someone must be making the decisions for me… The assumption, among many, that men are the ones that make wine [is the biggest challenge today.]” says Corison.

“People making assumptions that [being a female winemaker] is somehow different from just being a winemaker,” says Rae Wilson.

Regardless of industry experience or identity, all of these women admitted to one consistent strategy: continued hard work to fight for what is right.

“Very lucky timing and a lot of hard work helped me achieve my goals,” says Corison.

“[Being] steadfast and strong willed,” says Rae Wilson, “and I would be in the wrong industry if I wasn’t.”

“If [your work] shows results, in the end, it doesn’t matter if you are a woman or a man,” says Moller-Racke.

“[Racial] barriers still exist for me and for others … I own my business and work with great people,” says Sekhar. “But any BIPOC person knows if I had to step back into a more traditional role in a single winery that most of these barriers will still be there.”

“I would really like that ‘familial’ feeling of cooperation among winemakers of any race, nationality, gender or belief to keep blooming along,” says Delia Viader, who is the owner and founding winemaker at Viader in Napa, CA. She’s been in the industry for 34 years.

“[We need] more diversity—there are so many white guys, especially in the cellar,” says Jorgensen.

Through the years, hands-on experience has continued to be pivotal for these women regardless of background or education level.

“I worked on a 1,000-acre vineyard in the Central Valley [for] 10 hours a day, six days a week for minimum wage with no overtime, “says Katy Wilson, proprietor and winemaker at LaRue Wines in Sonoma, CA. She has worked the industry for 18 years.

“Really the best education came growing up with wine at the table,” says Viader.

“I developed my skills on the viticulture side for the first 20 years,” says Moller-Racke, “expanding and redeveloping the vineyards.”

Challenges consistently stack up higher for women who identify with other marginalized groups.

“Race, ethnicity and gender have all shaped my path, for better or worse. Proving my skills, my worth and my place on the team are always going to be part of my story,” says Sekhar.

“As a Black female wine producer… people are still surprised to learn that I am the owner and own the land on which the grapes are grown,” says Lee.

Mentors have always been key to increasing industry inclusivity and diversity. In more recent years, however, women have gone out of their way to open doors for others.

“With the help and direction of women from all different backgrounds… [I hope to] build an internship/ apprenticeship program to create pathways for women that may not see a place for themselves in this business,” says Rae Wilson.

“I’m trying to carve out time to network with colleagues and mentor younger folks,” says Sekhar.

“Being part of Women-Owned Wineries and Bâtonnage,” says Katy Wilson, “helped me see that I have sisters in wine where we can be supportive of each other.”

Several women winemakers were inspired to chart their own paths by those who didn’t work in wine. Others were drawn to the wine itself.

“Though there are many people I admire in the wine business,” says Corison. “Oddly enough, it’s the great wines of the world that have inspired me most.”

Katy Wilson says her great-grandmother was an inspiration. She “was such a great influence in my life that I named LaRue after her—Veona LaRue.”

“My father taught me how to drive on a tractor at the age of eight and instilled in me a love for the land,” says Lee.

“My husband Mitch Mackenzie was the most encouraging force behind my career decisions,” says Shelton.

Don’t be shy: What would you say is the most/are some of the most innovative ideas you’ve so far brought to the wine industry?

“I was able to plant my first vineyard in the mid 80’s, then replanted in the mid 90’s using new plant material and vineyard designs,” says Moller-Racke. “After that I started a huge clonal experiment at The Donum Estate.”

“Getting people to let down their guard of what they believe wine to be … Once someone opens up from what they think they already know about a wine or a place, then that’s where the experience can truly begin,” says Rae Wilson.

“All of the vineyards that I work with are within seven miles of the Pacific Ocean offering a pronounced ocean influence in the vineyards and in my wines,” says Katy Wilson.

“Explore less known (in California) white wine varieties [like Grüner Veltliner and Fiano]. … While I love these varieties in the classical places they grow in the world and am curious about how I can translate that to California,” says Sekhar.

“In the 1970’s the industry did not believe yeast strains made much of a difference in wine flavors. I did experiments … and I was able to prove them wrong,” says Shelton.

Education, passion and mentorship are important for all women and female-identifying people in the industry.

“Know your worth and don’t settle for anything less,” says Katy Wilson. “Rest assured, you have an industry of women winemakers here to back you up.”

“In the words of Ruth Bader Ginsburg, ‘Fight for the things that you care about, but do it in a way that will lead others to join you,’ ” says Lee.

“Look for mentors,” says Rae Wilson, “don’t be afraid to ask questions, and don’t think that you have any less right to place in the room.”

“Make education a priority,” says Jorgensen. “It’s not enough to be anecdotal or hands on. Be an expert. Learn everything you can. Have curiosity.

“I cannot emphasize enough the importance of building your network … if not for career advancement alone, for support, guidance, and camaraderie,” says Sekhar.

“Acknowledge those who supported you along the way and pay it forward by helping those just starting out,” says Shelton.

Home Videos The WORLD of WINE – Wine News. Cheap wine, tasting notes and cooking with wine The World of Wine – May 2021 … END_OF_DOCUMENT_TOKEN_TO_BE_REPLACED

How to visit Napa Valley on a Budget. In this video Carson and I explain a few ways to enjoy Napa on the cheap. Tip and advice about how to visit Napa … END_OF_DOCUMENT_TOKEN_TO_BE_REPLACED

Home Videos Get To Know Argentina Wine | Wine Folly If you love Malbec, Argentina is your ultimate wine region. But that’s not … END_OF_DOCUMENT_TOKEN_TO_BE_REPLACED