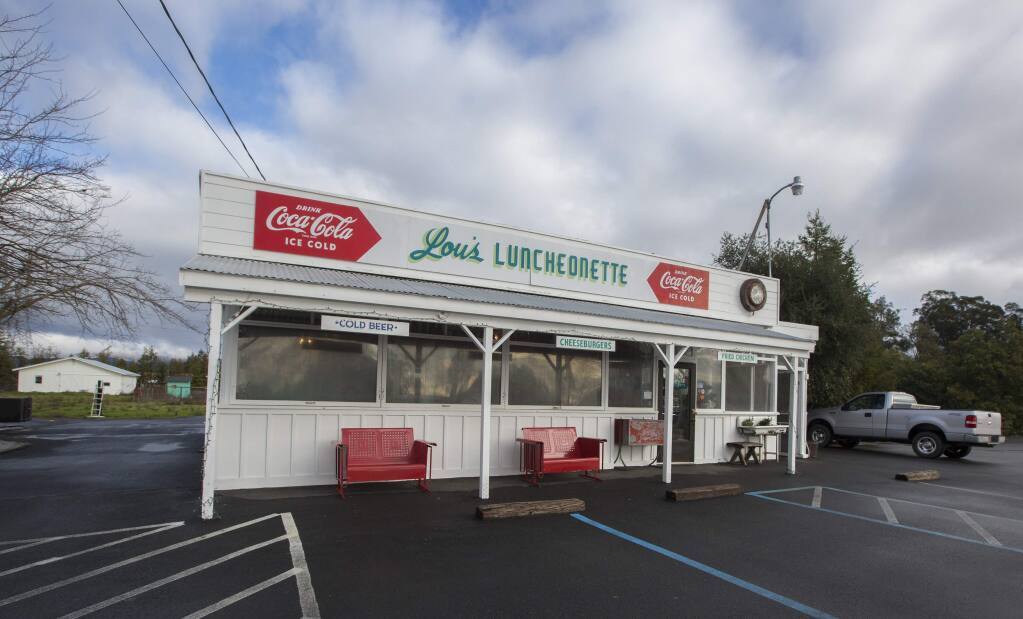 All of the roses and flowers are gone, replaced by a much more masculine and barebones outside décor that will mature eventually. Guests can expect loads of social distance-spaced tables outside, and limited seating eventually inside.

More than 50 members of Rotary of Sonoma Valley enjoyed a lunch of ribs, cole slaw and cornbread earlier this month, well served by limited staff, along with a tres leches cake Rotary President Mara Kahn brought in from Little Maya Bakery. Rotary moved to Reel & Brand this week where managing partner Kevin Kress can accommodate more than 100 people inside or outside, all socially distanced.

Lou’s Luncheonette just down the road

Formerly known as the Fremont Diner, Lou’s Luncheonette on Highway 121 will also benefit enormously if Amazon gets its way by installing a transfer depot on Eighth Street East. Think of all those Amazon drivers who will have to drive to and from the depot and wherever they live, many of them looking for lunch they didn’t have to make.

Lou’s lists among its starters and snacks gumbo, deviled eggs with bacon and chives, a basket of three biscuits with butter (jam extra), a chopped salad, onion rings, hush puppies, and pimento cheese with chicken biscuits and various add-ons.

You can also get a whole meal of gumbo with Andouille sausage and chicken, a plate of brisket with beans and slaw; a pulled pork plate with white bread and potato salad; a fried chicken dinner with either a boneless breast or bone-in leg and thigh, biscuit, mini slaw and collard greens; a Nashville chicken dinner that ads mac ‘n’ cheese with heat level choices; nachos; a catfish plate with coleslaw, remoulade and hush puppies.

Sandwiches include brisket, pulled pork, fried chicken or catfish, or a little or big burger, and even a ”Sub Impossible Burger.” Save room for the banana pudding, which consists of vanilla pudding, banana and ‘Nilla wafers. ($5.99 to $17.99). 2698 Fremont Drive, Sonoma. 938-7370.

Coming off a successful winemaker dinner featuring Ned Hill and Mike Cox and their La Prenda and Sonoma Collection wines and music by Isaac Carter, Reel & Brand’s next winemaker dinner on May 20 will feature four courses and four wines from the prized Petroni Vineyards paired by Petroni’s Patrick Gabrielli. (Petroni Vineyards and houses happen to still be for sale following the passing of its founder Lorenzo Petroni.)

Jessica Hamilton, a charming agriculture teacher, has resigned her position as agricultural teacher and advisor at Sonoma Valley High School, effective June 30. Hamilton has accepted a position in the Central Valley where she came from.

Hamilton seemed to be capable of doing it all to replace three ag teachers. But no single teacher can do the teaching of three people, from agricultural mechanics to animal husbandry and growing vineyards, fruit and vegetables and much more – virtually and in person during a pandemic.

In her year here, she has built up the agriculture program substantially, helping students with their animals, shaping up a new vegetable garden and helping teach students to care for the vineyard, as well as helping them with Future Farmers of America (FFA) activities.

The school district is actively seeking two new agriculture teachers, so important to Sonoma Valley and the future of farming, needed to feed locals as well as to feeding hungry people around the world.

Al Robles, co-owner of Broadway Market, Sonoma’s last locally owned grocery store, died Thursday morning after a long fight with various cancers. Al seemed always around the store helping customers find little items and was always so generous to local nonprofits. He and co-owner Ron Rogers were generous with their chickens and other foods for Schell-Vista fire district chicken barbecues and other fundraising events.

Robles’ passing came as the market is in the process of being sold.

A celebration of life for family and friends will take place this afternoon, April 30, at 2:30 p.m. at the Robles family home, Sonoma, according to Duggan’s Mission Chapel.

Home Videos The WORLD of WINE – Wine News. Cheap wine, tasting notes and cooking with wine The World of Wine – May 2021 … END_OF_DOCUMENT_TOKEN_TO_BE_REPLACED

How to visit Napa Valley on a Budget. In this video Carson and I explain a few ways to enjoy Napa on the cheap. Tip and advice about how to visit Napa … END_OF_DOCUMENT_TOKEN_TO_BE_REPLACED

Home Videos Get To Know Argentina Wine | Wine Folly If you love Malbec, Argentina is your ultimate wine region. But that’s not … END_OF_DOCUMENT_TOKEN_TO_BE_REPLACED