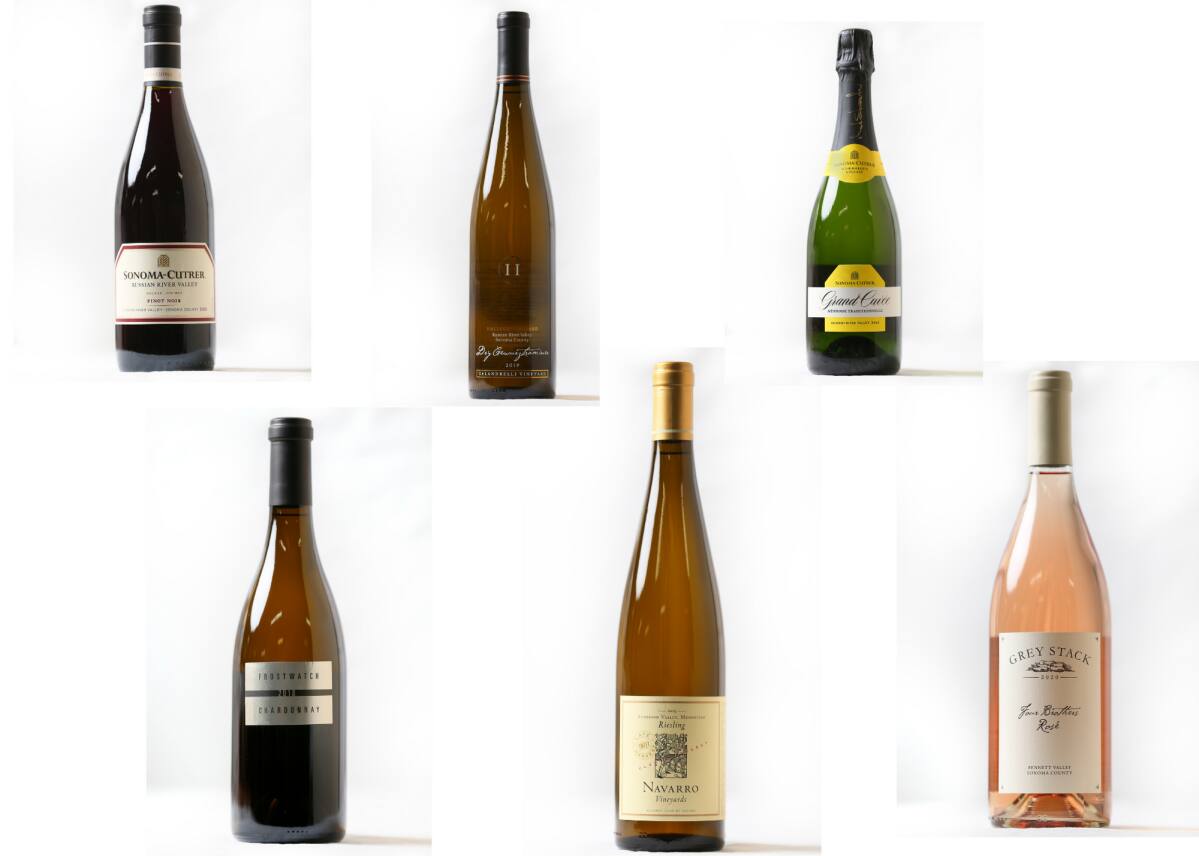 “The judging got down to two clear winners,” Groom said of the 17 red wines in the sweepstakes. “No surprise that one was a pinot. The surprise was that the other was not a zinfandel or cabernet but a grenache … a really top-class wine that just missed out on being the Best Red by one vote.”

“We’re probably down to maybe about 100 cases of the sparkling,” Schroeter said.

For the first time in the history of the contest, there was a tie between two wines. For Best of Show White, the votes were equally divided between the Frostwatch 2018 Chardonnay, Bennett Valley, which received 98 points, and the Halleck Vineyard 2019 Dry Gewurztraminer, Russian River Valley, also with 98 points.

“There were two clear winners in the whites with way higher votes than the other five wines,” Groom said. “It was not surprising that a chardonnay was one, but what was surprising was that it was from Bennett Valley,” rather than River River Valley or Sonoma Coast.

The other surprise was that a gewürztraminer rose to the top of the whites, as there aren’t many made in the North Coast, with the exception of those crafted by Navarro Vineyards in Anderson Valley.

“That is a first and great to see,” Groom said.

Best of Show Rosé went to Greystack 2020 Four Brothers Rosé, Bennett Valley, an appellation that enjoys the cooling influence of fog from the Petaluma Gap. The wine, made from pinot noir, was described as “pretty and delicate,” with “zesty acidity.”

“On the rosé, the surprise again was another Bennett Valley appellation wine being the best rosé,” Groom said. The Bennett Valley AVA is an American Viticultural Area that was granted status in 2002 and is located just east and south of Santa Rosa.

In general, Groom said the judges were a little tougher on the zinfandels this year, with only 30.5% of those wines earning gold compared to last year’s 39%.

In the county competition, Best of Lake County went to the Brassfield Estate Winery 2020 Sauvignon Blanc, High Valley, which garnered 97 points. The grapes were grown in the cooler High Serenity Vineyard, ranging from 1,760 to 1,800 feet in elevation.

Since Lake County is known for its high-quality sauvignon blanc, that was no surprise. The wine received 97 points and was described by judges as having a “citrusy, outdoorsy quality” that was “floral” with “fresh spice.”

Perhaps the biggest shock of the competition, however, was when Groom unveiled the Best of Napa County winner. The Michael Pozzan 2018 Zinfandel, Oakville beat out a more traditional Bordeaux blend and a cab franc from Napa to claim the award.

“Now that’s a first,” Groom said of the venerable varietal that is closely aligned with Sonoma County, especially the Dry Creek Valley.

The zinfandel earned 98 points and judges described it as “cartwheels on the palate” with “great pepper and spice.”

For the Best of the Best sparkling wine, Schroeter said he sourced the grapes from two of Sonoma-Cutrer’s estate vineyards.

The chardonnay came from the Vine Hill Estate Vineyard, located in the heart of the Russian River Valley near Forestville. The pinot noir grapes came from the Owsley Ranch Vineyard, the winery’s estate vineyard closest to the Pacific Ocean, located between Sebastopol and Freestone.

“Vine Hill Ranch is our largest estate vineyard, but it has these rolling hills, so it’s elevated,” Schroeter said. “And Owsley Vineyard has steeper hills.”

The two hillside vineyards were also the source for the Best of Show Red, Sonoma-Cutrer’s 2018 Pinot Noir, with half the pinot coming from Vine Hill and half from Owsley Ranch.

“We get this beautiful concentration of the fruit character, because there’s lower yield on the hillside,” Schroeder said.

Sonoma-Cutrer is widely known as the House of Chardonnay, since 95% of its production is that varietal, whereas only 5% is pinot noir. But the winery firmly planted in pinot country has been making pinot noir since 2002.

“We have a separate little pinot noir winery that we call the pinot barn,” Schroeter said. “We do it with a hands-on approach, like most small producers in the Russian River Valley, all small-batch, an artisanal approach to pinot.”

That formula, in a nutshell, is why pinot noirs from the Russian River Valley are gaining such a huge reputation in California and beyond.

“Pinot noir used to be the Holy Grail of wines to make because it is such a finicky varietal,” Schroeter said. “But when it’s grown in the right conditions — the Russian River Valley, especially as we go closer to the coast — and made in small batches … that’s why we see so many great pinot noirs coming out of Sonoma County.”

However, Schroeter noted that pinot noir grapes are delicate and susceptible to climactic forces, from rain or rot to sunburn, so vineyards must be managed properly for the grapes to thrive.

“Especially with the heat waves, if the fruit is too exposed … you have to be very careful about overexposing it,” he said. “The skin is a matte black in terms of color and absorbs more heat.”

With the rising temperatures of climate change already upon us, Schroeter opined that avid pinot winemakers are going to need to start looking for even cooler areas to grow the delicate grape in the future.

“I’m thrilled that the U.S. is back in the Paris (Agreement) climate accord,” he said. “As a nation that is one of the top polluters in the world, we need to take a stand and show the world what we can do to help with climate change.”

Staff Writer Diane Peterson can be reached at 707-521-5287 or diane.peterson@pressdemocrat.com. On Twitter @dianepete56

I’m interested in the home kitchen, from sheet-pan suppers to the latest food trends. Food encompasses the world, its many cultures, languages and history. It is both essential and sensual. I also have my fingers on the pulse of classical music in Sonoma County, from student mariachi bands to jazz crossover and symphonic sounds. It’s all a rich gumbo, redolent of the many cultures that make up our country and the world.

Home Videos The WORLD of WINE – Wine News. Cheap wine, tasting notes and cooking with wine The World of Wine – May 2021 … END_OF_DOCUMENT_TOKEN_TO_BE_REPLACED

How to visit Napa Valley on a Budget. In this video Carson and I explain a few ways to enjoy Napa on the cheap. Tip and advice about how to visit Napa … END_OF_DOCUMENT_TOKEN_TO_BE_REPLACED

Home Videos Get To Know Argentina Wine | Wine Folly If you love Malbec, Argentina is your ultimate wine region. But that’s not … END_OF_DOCUMENT_TOKEN_TO_BE_REPLACED