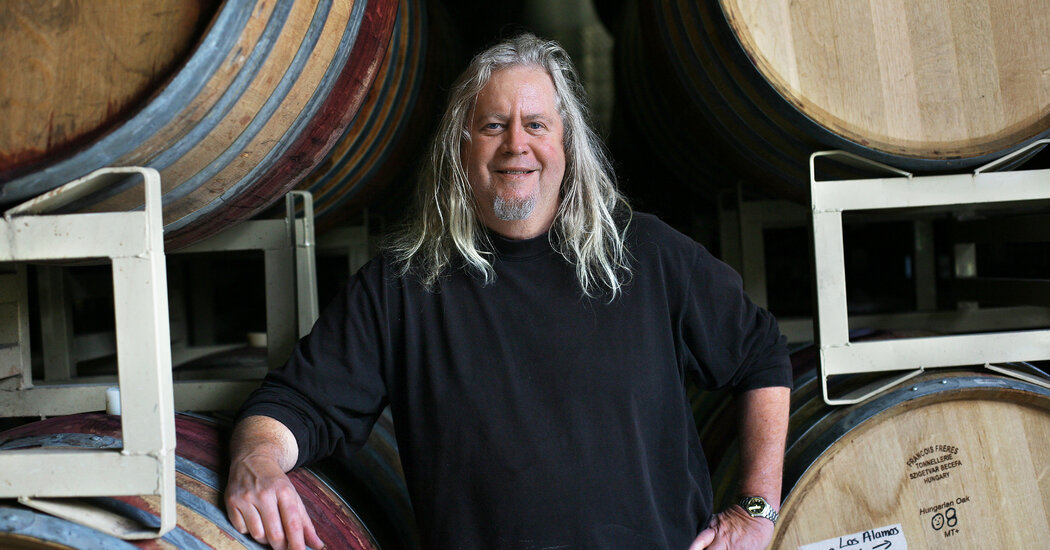 Jim Clendenen, a larger than life, globe-trotting winemaker who through the force of his flamboyant personality and the understated beauty of his wines helped put the Santa Barbara region on the map, died on Saturday at his home in Buellton, Calif. He was 68.

His daughter, Isabelle Clendenen, said the cause had not been determined.

Mr. Clendenen and a partner, Adam Tolmach, founded their winery, Au Bon Climat, in 1982 in an old dairy barn outside of Los Alamos, Calif., about 50 miles northwest of Santa Barbara.

The region was home to barely a dozen producers back then. Santa Barbara County had thrived as a viticultural area in the 19th century, but that ended in 1920 with the enactment of Prohibition. Not until the 1960s would vineyards again be planted. Today, almost 300 wineries operate there.

Au Bon Climat was at first a two-man operation. Without vineyards, the partners bought grapes and, with rudimentary equipment, made the wine using methods that Mr. Clendenen had absorbed while working in Burgundy on several trips to France. He had developed a passion for chardonnay and pinot noir, the main grapes of Burgundy, and they became his focus.

“We had no money to hire any labor,” he said in the book “Vines & Visions: The Winemakers of Santa Barbara County,” by Matthew Dennis Kettman. “We did all the picking, we did sales, delivery, everything.”

By the mid-1980s, the wines of Au Bon Climat had been noticed and singled out for praise by critics. Partly this was because Mr. Clenenden’s wines showed unusual subtlety and restraint. He was devoted to Burgundy and sought to achieve in his own wines Burgundy’s characteristic grace and sense of place.

But he also drew the spotlight because he traveled feverishly, promoting his wines and the Santa Barbara region, and because of his exuberant charisma.

Mr. Clendenen was a big man who often had the loudest voice in the room and the loudest shirts. He wore a striking leonine mane of hair well after long hair had gone out of fashion, and a goatee long before goatees came back in style. His wines were similarly distinctive but never trendy.

This sometimes worked against him commercially. Beginning in the mid-1990s, it became fashionable in California to harvest ultra-ripe grapes, making powerful, opulent wines high in alcohol and almost syrupy in texture. These wines scored well with critics and sold for high prices, but to Mr. Clendenen they violated the proportional beauty of the Burgundian style he cherished.

“I wish somebody could explain to me how picking grapes when they’re precisely in balance and making a wine in balance became unfashionable,” he told The New York Times in March 2009.

He never changed his approach, and for many years his wines were more celebrated abroad than in the United States. But in the last decade, the pendulum swung back. Classic styles like Au Bon Climat’s once again came to be prized in the United States, with the wines serving as models for many younger producers.

James Alexander Clendenen was born on Jan. 11, 1953, in Akron, Ohio, to Donald and Alice Clendenen. His father was a chemical engineer and his mother a homemaker. Not long afterward, the family moved to Southern California. Jim attended high school in Whittier and then the University of California at Santa Barbara, from which he graduated with a pre-law degree.

He had traveled through Europe during his junior year and fallen in love with the wine and food culture there. He was particularly drawn to France, where he picked up the language. When he returned to Southern California, he abandoned the path to law school and decided instead to become a winemaker. He went back to Europe in 1977, spending most of six months in Bordeaux, Champagne and Burgundy, the leading French wine regions.

His experience in Burgundy in particular, he said, convinced him that, even with few resources, he could make a living in wine. “In Burgundy, if you have a tractor, three rows of vines and room for 20 or 30 barrels in your basement, you could be as powerful as anybody in the area,” Mr. Clendenen said in 2013 on the Levi Dalton podcast “I’ll Drink to That.”

In California, he learned the basics at Zaca Mesa, a leading Santa Barbara winery in the 1970s. There, he also met Mr. Tolmach, who would become his partner at Au Bon Climat.

Mr. Clendenen left again in 1980 to work harvests in Australia before another trip to Burgundy in 1981. “I learned that everything else I’d learned had been a waste of time, and that my life was going to be not loosely but accurately based on a Burgundian model,” he said on “I’ll Drink to That.”

As the Santa Barbara wine region expanded through the 1980s, Au Bon Climat outgrew its early home. In 1989, Mr. Clendenen was invited by Bob Lindquist, the founder of Qupé winery, to join him in becoming a tenant at a big, new winemaking facility being built at the Bien Nacido vineyard in the Santa Maria Valley.

Beyond chardonnay and pinot noir, Mr. Clendenen grew other, lesser-known Burgundian grapes, like pinot gris, pinot blanc and aligoté. He loved Italian varieties like nebbiolo, teroldego and tocai friulano, which he grew and sold under the label Clendenin Family Vineyards. He also explored areas like the Anderson Valley of Mendocino County and Oregon, selling those wines under the label Ici/La-Bas, French for here and there.

Mr. Lindquist and Mr. Clendenen’s cooperative agreement to share production facilities endured until Mr. Clendenen’s death. The winery was no more than a giant utilitarian shed, nothing like the grand tourist attractions that populate Napa Valley. It was not open to visitors — there was a tasting room in the city of Santa Barbara for them — but it was a prize stop for members of the wine trade.

Mr. Clendenen was a superb cook, and when in residence at the winery he prepared lunch for the staff and whichever guests happened to arrive in time. When the meal was ready, work stopped and everybody took a seat among the barrels at long, indoor tables to eat and sample whichever bottles were open, whether a new vintage or a 20-year-old chardonnay.

In addition to his daughter, he is survived by a son, Knox, and two sisters, Marsha Clendenen and Patricia Matela. His marriage to Morgan Clendenin, the mother of his children, ended in divorce, as did a first marriage, to Sarah Chamberlin.

While fun and epicurean pleasures were never in short supply in Mr. Clendenen’s orbit, he was fixated on wine and winemaking, particularly in his younger years, pursuing details with relentless determination.

“Jim blew me off the table with his almost insane obsession with details both great and small,” recalled Mel Knox, a longtime barrel broker in California and close friend who traveled with Mr. Clendenen in 1981. “He saw things and asked questions that nobody else did.”

Home Videos The WORLD of WINE – Wine News. Cheap wine, tasting notes and cooking with wine The World of Wine – May 2021 … END_OF_DOCUMENT_TOKEN_TO_BE_REPLACED

How to visit Napa Valley on a Budget. In this video Carson and I explain a few ways to enjoy Napa on the cheap. Tip and advice about how to visit Napa … END_OF_DOCUMENT_TOKEN_TO_BE_REPLACED

Home Videos Get To Know Argentina Wine | Wine Folly If you love Malbec, Argentina is your ultimate wine region. But that’s not … END_OF_DOCUMENT_TOKEN_TO_BE_REPLACED