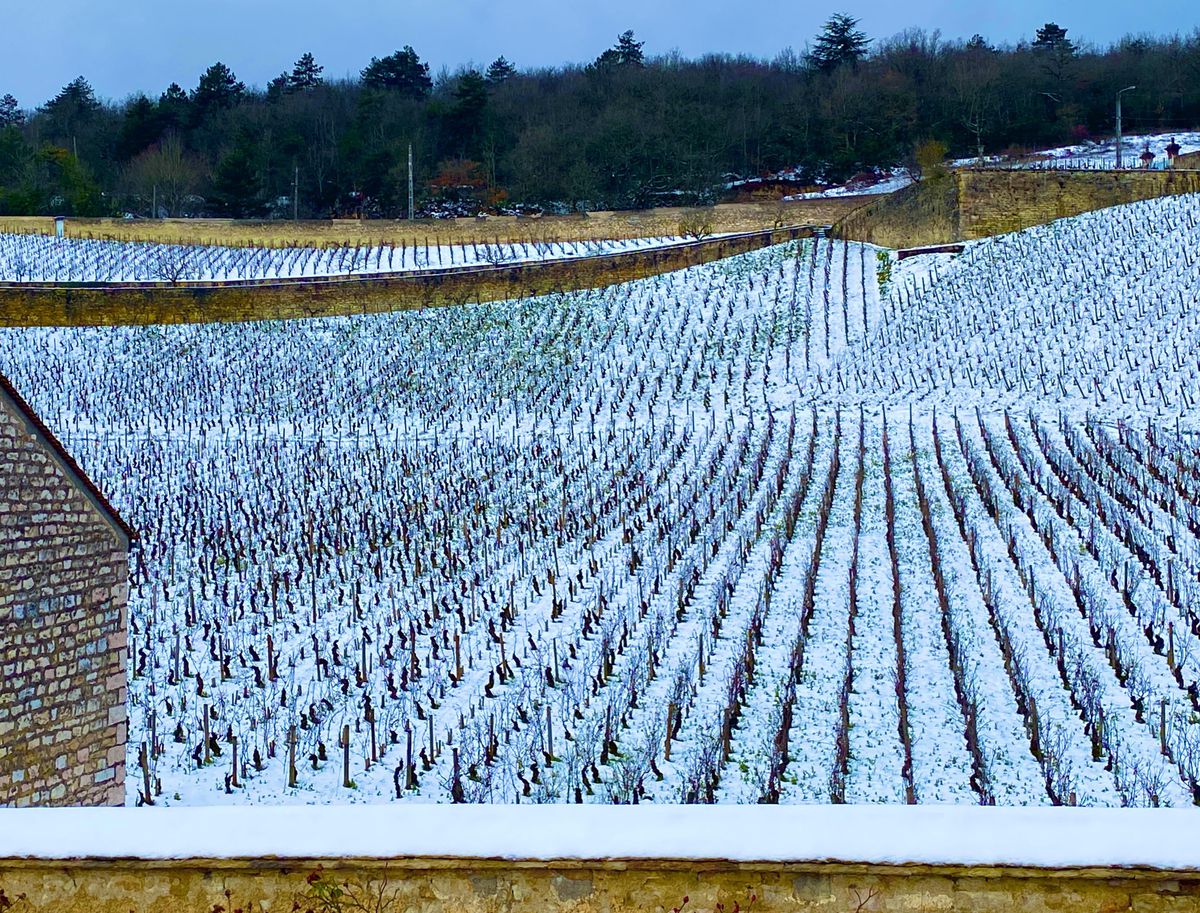 The Spanish city of Madrid was walloped with a foot of snow earlier this month, shutting down flights, trains and transportation routes as well as schools and universities. Some 400,000 trees were severely damaged. Atlantic moisture collided with a Siberian air mass and battered not only Madrid, but many regions of the country. Named Filomena, this was the largest snowstorm to hit in 50 years.

This January 9th tempest also impacted vineyards, leaving those who tend vines with both challenges and advantages. Winemaker Isabel Galindo Espí from the 54-acre (22-hectare) biodynamic vineyard and winery Las Moradas de San Martin, on the outskirts of Madrid, found their predominantly Grenache vines buried under three feet (one meter) of snow. She described the situation.

‘There is no record in the last years of a snowfall like this one here. Due to this historical storm it was impossible to arrive at the winery for three days, since the path is covered with fallen trees and snow—even a week after the storm. It’s very difficult and dangerous and hard to get there. We need snowshoes. But it’s spectacular! A little dramatic, but fantastic and wonderful also.’

In addition to hindering access to winery and vines, the snow also delayed Galindo’s normally one-hour commute from Madrid. That same snow, however, can also be beneficial to vineyards: once it melts the water will recharge the underlying aquifer within an otherwise arid agricultural landscape.

After that recent snowfall, temperatures dropped to 14 degrees Fahrenheit [minus 10 degrees Celsius]. Galindo believes this drop is not likely to cause damage because vines are dormant in January.

Although vines might be harmed if the temperature dropped further and remained there for a sustained period, the snow can also protect vines by insulating them from the cold.

‘Cold and the snow is good for the vineyard, as long as it is in the dormant season. In February or March, this snow and cold may be dangerous. But now it’s not a problem. The temperatures fell a lot, but it’s not bad now because the plants are sleeping.’

However, this cold may delay the vegetative cycle. Could this impact wine quality? Isabel believes that, overall, if an elongation of the growing season occurs, it will be beneficial.

‘Based on experience, a slow maturation is better. Grape compounds are then more well balanced and make elegant wines. We have a refrain, a proverb. My grandmother says ‘A year of snow is a year of good wine.’

She recalls how the last two winters were warm, and the consequent grape harvests took place in late August, rather than during the usual period of mid-September. These earlier regional harvests, she believes, can produce wines which she disdains as being more sweet and concentrated. In contrast she considers 2007 an excellent vintage, when the harvest took place in October.

On January 16th, one week after this storm hit Spain, snowfall bludgeoned the Burgundy region of France, leaving five inches (13 centimeters) of snow over vineyards—an unusual event for the region. Yet the impact may also be beneficial. Philippe Pascal, owner of Domaine du Cellier aux Moines in the Givry Region of Burgundy, commented on the snowfall, and says he appreciates chilly weather while vines remain dormant.

‘The snowfall melts quickly, but it helps mineralization of a number of elements in the soil to move deeper, and closer to the roots. Ideally, what we need now is more lasting frost to clean up the vines from various pests before spring.’

Regardless of weather, Pascal knows that winemakers can remain obstinately critical of the very natural forces that drive their livelihood.

‘A good vigneron always complains about the weather anyway.’

Home Videos The WORLD of WINE – Wine News. Cheap wine, tasting notes and cooking with wine The World of Wine – May 2021 … END_OF_DOCUMENT_TOKEN_TO_BE_REPLACED

How to visit Napa Valley on a Budget. In this video Carson and I explain a few ways to enjoy Napa on the cheap. Tip and advice about how to visit Napa … END_OF_DOCUMENT_TOKEN_TO_BE_REPLACED

Home Videos Get To Know Argentina Wine | Wine Folly If you love Malbec, Argentina is your ultimate wine region. But that’s not … END_OF_DOCUMENT_TOKEN_TO_BE_REPLACED