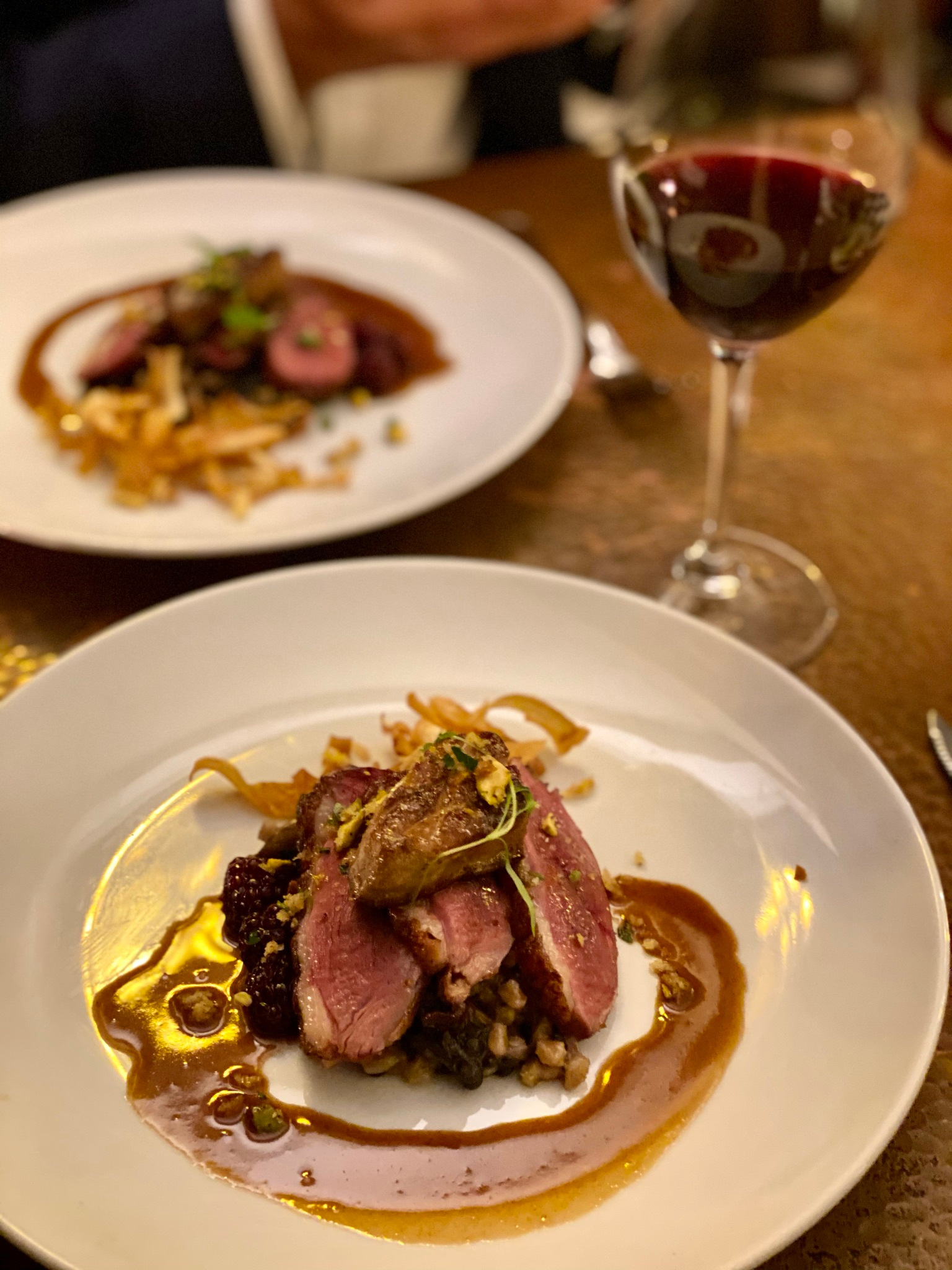 Jack’s is back. There are oysters. And not just Blue Points, but a half-dozen varieties in a mix of East and West Coasters. Fresh shucked to order, fried to a crisp bubble in buttermilk batter with a smite of wasabi and citrus aioli, or baked as Rockefellers with mascarpone creamed spinach and Parmesan gratin. Oh, you like the sweet cucumber-melon taste of a Pacific Northwest Kusshi? Slurp it down with a cucumber vermouth mignonette and a glass of Cremant Brut.

In addition to a-la-carte options is a seven-course tasting menu, available Friday and Saturday nights, which allows the restaurant’s new executive chef, Elliott Vogel to creatively flex while respecting the traditions of a grande-dame institution. Portions are surprisingly big, making it a good value despite the $105-per-head hit. Add the wine pairing if your pockets run deep; they’re equally generous pours.

The storied oyster house still anchors lower State Street in its awninged, dark-wood, formal glory, despite closing during the lockdown for the first time in its 108 years. A shaky reopening was limited to takeout only before closing and reopening with reduced dinner hours and a new menu. And while early reports suggested Jack’s classics like calf liver and onions would return, they’ll be reimagined with a twist.

What’s clear is we’re finally seeing Jack’s Oyster House as it sees itself, helmed by a youthful team with an average age of 27. Managing partner Josh White, 31, is in charge, having assumed daily operations from majority owner and long-term manager Brad Rosenstein, whose eponymous grandfather founded Jack’s; and after hiring Vogel, 32, sous chef Jack Keating, 24, and assistant GM Liz Cottrell, 23, which might explain the recent embrace of Instagram.

Now, here’s the real bombshell. Within the next few weeks, the service bar, inset within the main dining room, will open as a raw bar. A real oyster bar. I kid you not. As the author of a stinging 2015 review that expressed my deep dissatisfaction with the lackluster food, high prices and virtually absent bivalves at Jack’s, I couldn’t be happier to break this news. But if it’s to last, they’ll need plenty of downtown guests.

Vogel (Savoy Taproom, MezzaNotte, Daley’s on Yates, Tala Bistro) has landed at Jack’s with an interest in reviving appreciation for French technique. After the oyster course, his tasting menu delivers with a beautifully clarified bison consommé as the prettiest moat for savory custard topped with Hackleback sturgeon caviar and 24-karat gold leaf.

As with all art, there’s the mind of the artist and the story we construct for ourselves, and though Vogel later describes his development process, I’m struck by the plate’s similarity to chawanmushi, a savory Japanese egg custard served with dashi broth. In Vogel’s version, oceanic salinity comes from caviar that amplifies the light bison broth and is cut by passionfruit and muscat grapiness in White’s pairing of Alsace Hugel “Gentil.” The wine, a white blend of riesling, sylvaner, gewurztraminer and pinot gris, is magical in this pairing.

Courses read like they’re from a French royal court, with bison giving way to rare elk striploin sliced against buttery, tightly layered potato pavé, forest chestnuts and a bacon-Brussels ragout. A seared scallop with caviar rests on silky parsnip puree. Toasted almond butter and orange is its own thing, but butter and citrus bring to mind a swanky meuniere, its hue matching the salmon-pink Vidal-Fleury rosé.

A deconstructed plate of house-cured beet-and-vodka sockeye gravlax salmon, dill raita, panko-crusted soft-boiled egg and pumpernickel points takes me back to the grandiosity of The Russian Tea Room in midtown Manhattan. Toss a few buckwheat blinis on board and switch the Sancerre for icy Stoli vodka, and we’d be there. Note the beluga lentils with a tender duck duo of roasted breast topped with seared foie gras and you’re spying Vogel’s game of playful connections (since the small, black lentils derive their name from the Russian caviar) and layering textures from oyster mushrooms, pistachio gremolata and farro, another nutty ancient grain.

White gave Vogel a six-week dessert challenge during lockdown, and the winning six are a la carte, with two on the tasting menu. One, a mille-feuille puffed pastry loaded with vanilla custard and strawberries, is less delicate than the famed French pastry, but since inspiration is from childhood toaster strudels, the bulkier body makes sense.

I’m intrigued by tiny piped hibiscus meringues, accents for a baklava-inspired dish separated into its components — a wispy phyllo nest, pistachio gelato, rose honey and almond praline. The meringue’s airy, mousseline texture is unlike French, Italian or Swiss meringue, and when I query Vogel, he seems pleased: “It’s Balinese, a Swiss-style meringue made with palm sugar. Only been around for about eight years.”

The few flaws seem easy to fix, relating more to practice for a young team with few guests. Signature cocktails are sweet in spite of bartender tools like pisco, Lillet Blanc and a slew of housemade bitters. And the wine pairings are fetched almost as an afterthought to the course, when I’d expect to see the bottle as it’s poured and before the next plate arrives.

We’re conscious there are few guests on a Saturday night: a family, some couples, all in more-than-casual attire. If Jack’s can bring back tasting menus and a raw bar, let’s do our part to revive the tradition of dressing for dinner. An evening like this deserves it.

Home Videos The WORLD of WINE – Wine News. Cheap wine, tasting notes and cooking with wine The World of Wine – May 2021 … END_OF_DOCUMENT_TOKEN_TO_BE_REPLACED

How to visit Napa Valley on a Budget. In this video Carson and I explain a few ways to enjoy Napa on the cheap. Tip and advice about how to visit Napa … END_OF_DOCUMENT_TOKEN_TO_BE_REPLACED

Home Videos Get To Know Argentina Wine | Wine Folly If you love Malbec, Argentina is your ultimate wine region. But that’s not … END_OF_DOCUMENT_TOKEN_TO_BE_REPLACED