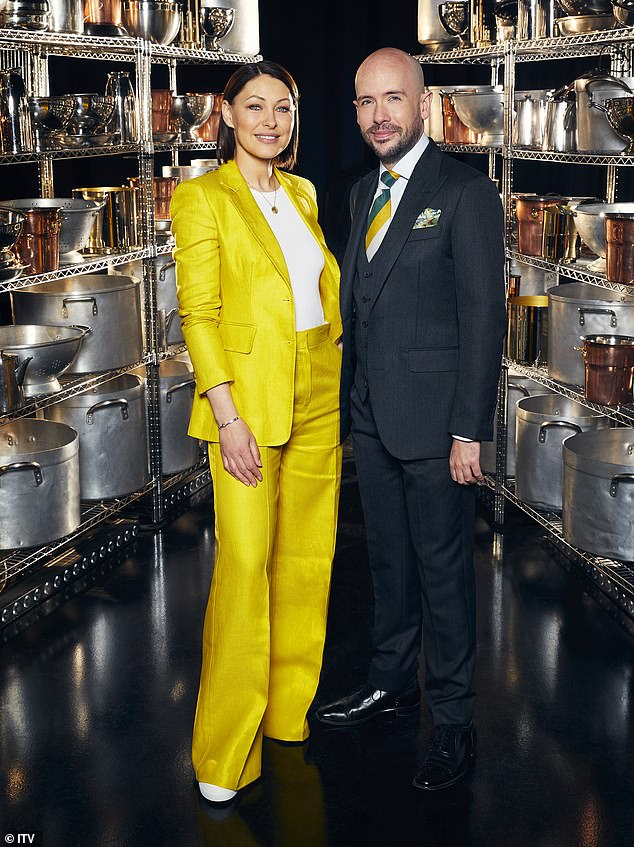 The new must-watch show of the summer is starting tonight as Britain’s favourite celebrities battle it out to go from zero to hero in the kitchen – whipping up tantalising dishes that will leave viewers at home drooling and ready to re-create the recipes, cooking like a pro chef at home!

Cancel your plans for this evening and clear your diary for Tuesday nights because you won’t want to miss a single episode of Cooking With The Stars, which begins at 9pm on ITV.

Hosted by double act Tom Allen and Emma Willis (set to be TV gold), the series will see some of the UK’s top stars in an epic battle of the frying pans as they fight to be crowned the first ever Cooking With The Stars champion.

Expect gripping scenes – and the occasional injury – as amateur chefs like Johnny Vegas and AJ Odudu take to the kitchen. But will they be able to handle the heat and make it through to the next round, or will they face the chop in the dreaded blind taste test?

Presenter Tom Allen revealed: ‘It’s a feel-good cookery competition featuring some very well-known celebrities alongside some of the nation’s best chefs. It’s got glitz and glamour and is as competitive as it gets!’

Wannabe top chefs will be dying to put their own skills to the test at home to see if they can perform better than their favourite celebrities! ALL ingredients on Cooking With The Stars will be available at M&S Foodhalls. So viewers can show the stars a thing or two in the kitchen and re-create all the pro-chef’s recipes at home for their families!

Find exclusive Cooking With The Stars free collectable recipe cards and the freshest ingredients from each show at your local M&S store. All recipe cards also include the perfect wine pairing from M&S wine expert and everyone’s favourite maître d’hôtel, Fred Sirieix. Cheers! Keep reading for a sneak peak of the recipes appearing on the first episode at 9pm tonight!

Cancel your plans for this evening and clear your diary for Tuesday nights this summer because you won’t want to miss a single episode of Cooking With the Stars, which begins at 9pm on ITV (pictured: Presenting double-act Emma Willis and Tom Allen) 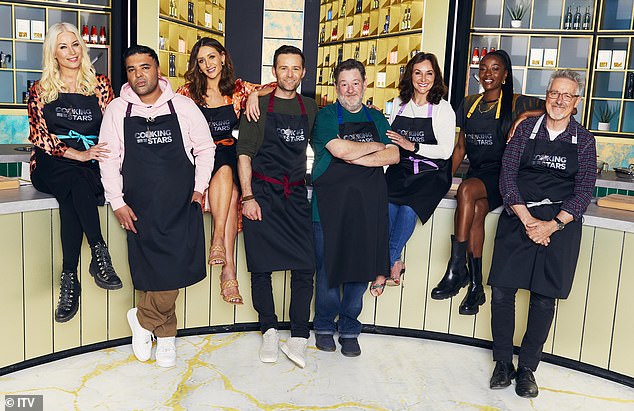 (pictured, Denise van Outen, Naughty Boy, Catherine Tyldesley, Harry Judd, Johnny Vegas, Shirley Ballas, AJ Odudu and Griff Rhys Jones) Those stars who fail to make the cut in the first round will face elimination, with a sudden death dish that would leave even the most confident cook quaking in their apron

The show will see legendary chef and TV presenter Rosemary Shrager coaching Johnny Vegas, while Shirley Ballas swaps her dancing shoes for an apron as she’s mentored by culinary expert and regular chef on This Morning, Joseph Denison-Carey.

Meanwhile actress Catherine Tyldesley will also be looking to renowned chef Tristan Welch for inspiration in the kitchen as she joins the fray.

Under the watchful eye of their mentor, the celebs will whip up a restaurant worthy dish before facing the judgement of the professional chefs. 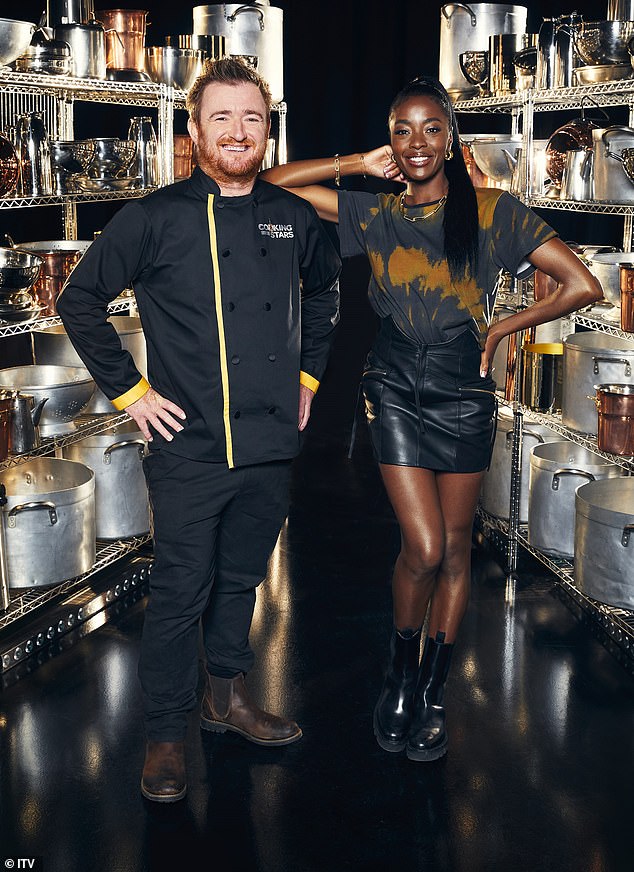 Expect gripping scenes, and the occasional injury, as amateur chefs like Johnny Vegas and AJ Odudu take to the kitchen – but will they be able to handle the heat and make it through to the next round or will they be sent into the dreaded blind taste test? 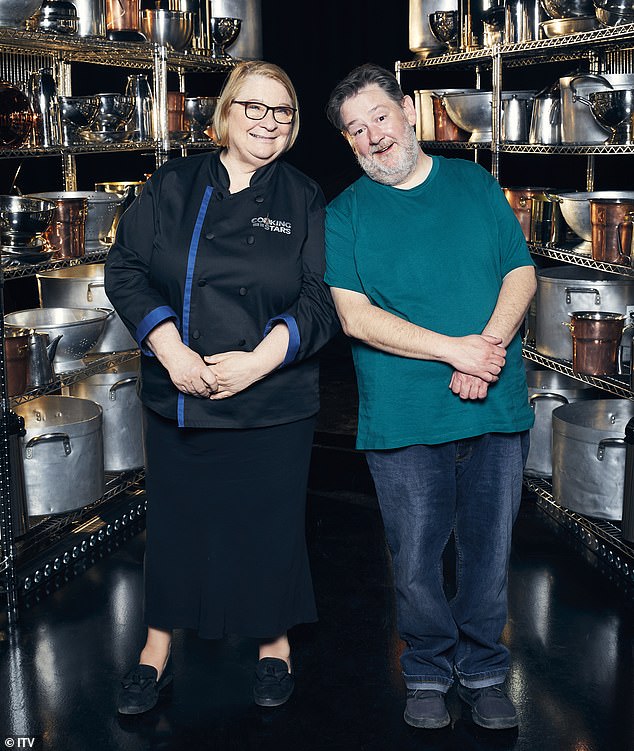 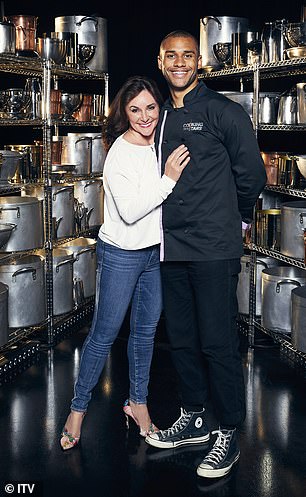 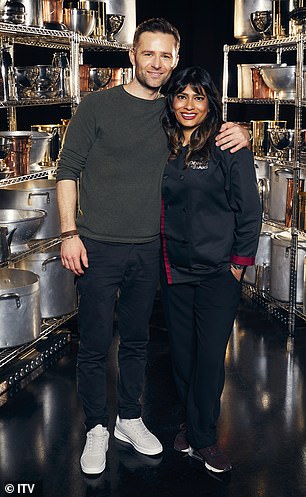 Emma Willis said viewers can expect fierce battles and rivalries between celebs, and their mentors, as they try to get their hands on the Golden Frying Pan trophy.

She explained: ‘The chefs wanted to win! There’s no messing with that. But they also wanted the celebrities to have fun and enjoy it.’

Meanwhile she teased that some of stars even add their own flair to the recipes, saying: ‘You can follow a recipe, and you can try and remember all the things they’ve taught you, but you have to go with your instincts.

‘AJ was amazing with that. She was like “it only says this much salt but I’m just going to put a bit more in”, and she would just freestyle.’ 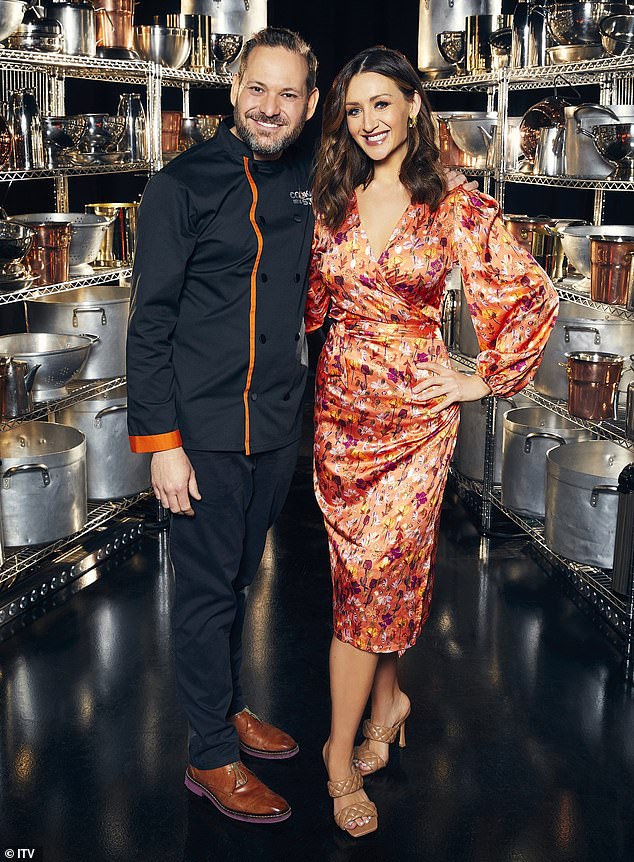 And even injuries won’t get in the way of the competitive spirit in the kitchen, with Emma joking Harry Judd ‘barely had any fingers left’ by the end of the competition.

She added: ‘He just kept cutting himself…The medic was on camera more than we were on that first day!’

The bottom two who fail to make the cut will then face the elimination round, with a sudden death dish that would leave even the most confident cook quaking in their apron.  Proper edge of the seat stuff!

They will be tasked with whipping up a meal without any guidance from their mentor before the judging panel decide who goes home in a blind taste test.

Percy Pig fans Rejoice! Cuddly toy which sent M&S fans wild is BACK – and this time he’s a chef 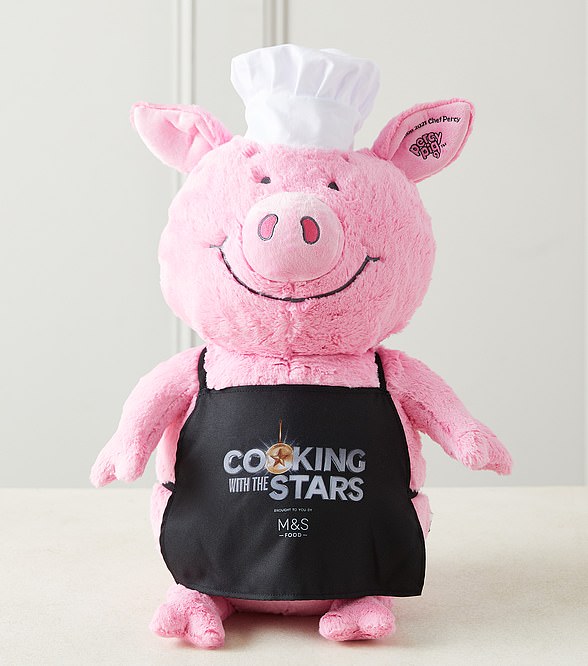 Now, an exclusive Cooking with the Stars chef Percy Pig is available in M&S Foodhalls across the UK for £16

VIP news… Very Important Percy News! From today an exclusive Cooking with the Stars chef Percy Pig is available in M&S Foodhalls across the UK and online for £16.

There was Percy Pig mania when M&S launched Percy soft toys for Christmas and Easter… and now he’s had what could be his BEST makeover yet.

The loveable cuddly toy will be dressed in a Cooking with the Stars apron and chef hat, and is bound to be an instant hit with Percy mega fans. We can’t think of a better sous chef! 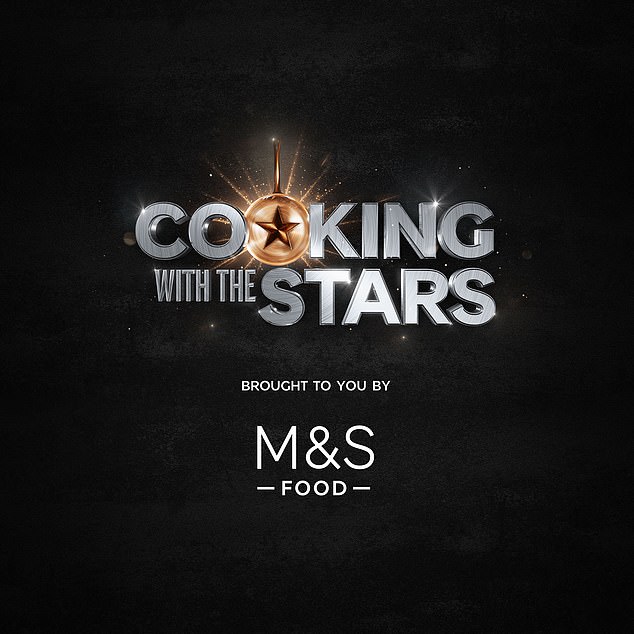 Think you can do better than your favourite celebrity?

Viewers can head straight to their local M&S and pick up exclusive free collectable Cooking With The Stars recipe cards, along with the freshest ingredients featured in the series, from pasta flour to top quality fish and seafood, and show the celebs a thing or two in the kitchen!

After watching the Cooking With the Stars, you’ll be desperate for Extra Helpings!

Tune into incredible spin-off programme Extra Helpings on the M&S Youtube channel every Tuesday at 10pm.

The show is hosted by social media royalty, Woody and Kleiny, who have over 10million followers across social media (and a quarter of a billion views on YouTube)!

This hilarious double-act will host exit interviews with your favourite stars after their elimination, as well as sharing exclusive backstage gossip – how serious WAS that rivalry? – and even stage backstage pranks – from electric chairs to chilli eating challenges!

What’s more, M&S wine expert, Fred Sirieix will join Woody & Kleiny in an M&S store each week, providing his top picks for the recipes – which customers can re-create at home – and getting up to some serious fun, including blindfolded tastings!

Be sure not to miss an episode by clicking subscribe.

Don’t forget to follow @official_percyig to see what he gets up to behind the scenes on Extra Helpings with Woody & Kleiny and the contestants too!

And you can keep up with Percy’s escapades on TikTok @mandsfood too!

M&S Select Farms 21 day aged British fillet steak is perfect for making Rosemary’s delicious dish, while the M&S Select Farms British lamb is ideal for anyone who wants to try their hand at Nisha’s gingerbread delicacy.

And there’s something for vegetarians too! Cheese fans will be drooling over the creamily indulgent M&S Burrata.

M&S spices including dried birdseye chillies, garam masala, juniper berries, mace and chilli powder will add the perfect kick to any dish, while the M&S edible viola flowers are sure to wow friends and family.

Tom revealed: ‘What’s great about the show is that we are encouraging people to follow the celebrities’ lead and cook at home.

‘It’s interactive in that sense, and giving the viewers the chance to pick up the same invaluable cooking tips as the celebrities.’

He added: ‘By following the same recipes and making something to share with their family, they are going through the same experiences the celebrities go through.’

Those who are inspired by the stunning set can even revamp their own kitchen with M&S homeware – picking up the very same whisks and pans the celebs are using.

You can learn even more about Cooking With The Stars and find the recipes to recreate the meals at home for your family at M&S online. (don’t forget the collectable recipe cards are available in M&S Foodhalls too!)

Still desperate to find out more? Find your local store on Facebook to keep up with the latest news and updates from the friendly faces at an M&S near you… and watch as they bring Cooking With The Stars to life in stores!

The first episode of Cooking With The Stars airs on ITV tonight at 9pm. The aftershow Extra Helpings will air at 10pm on YouTube. 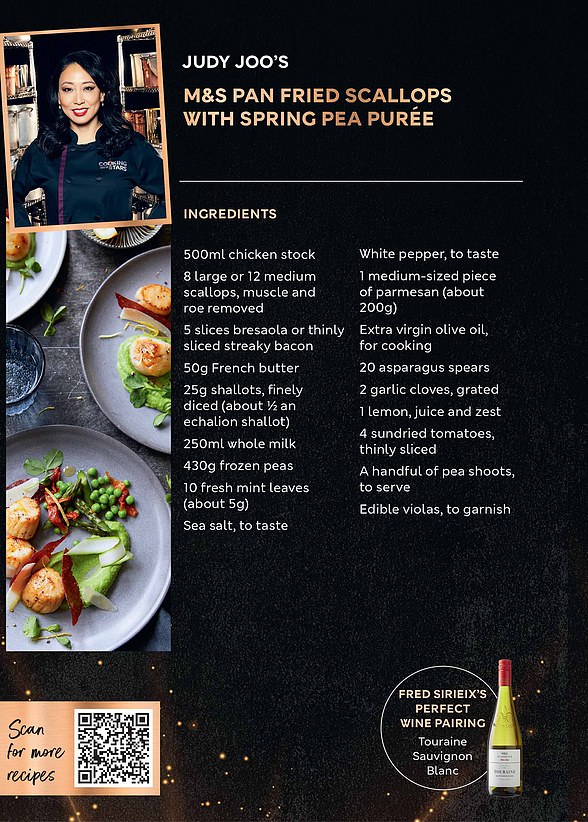 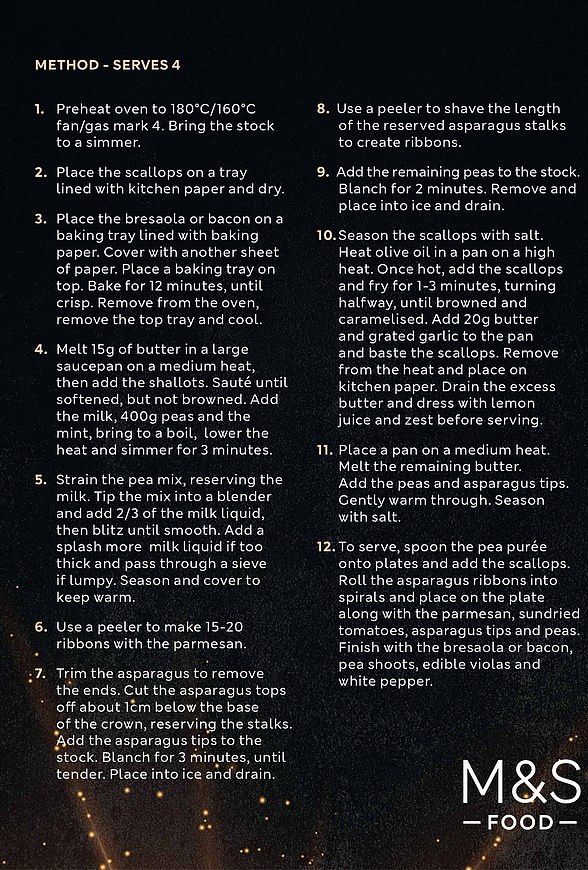 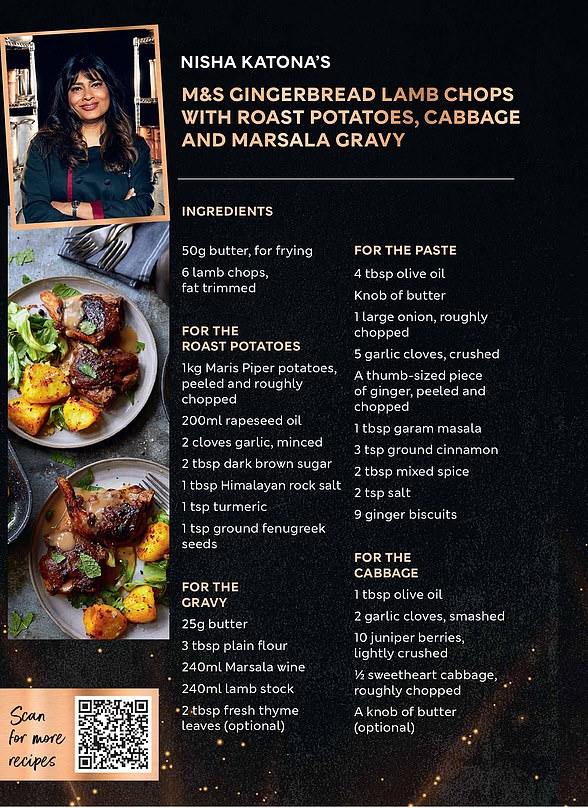 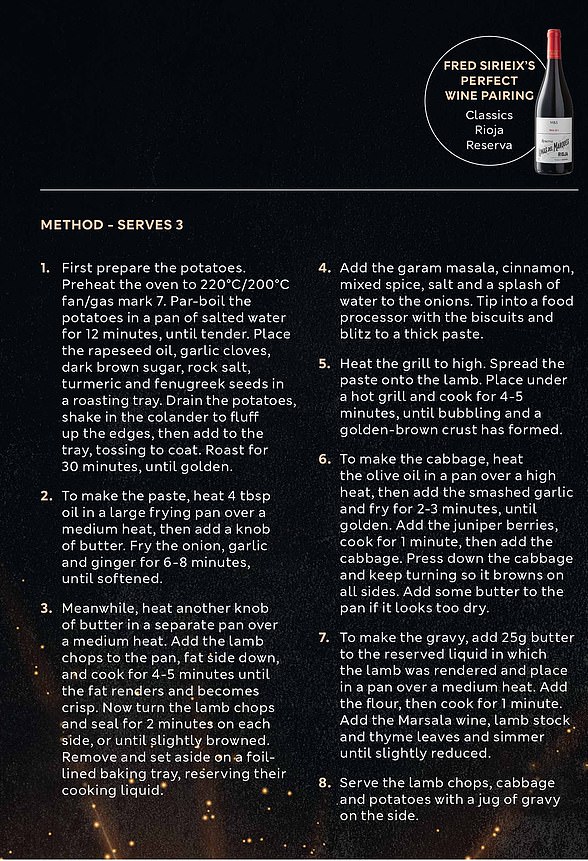 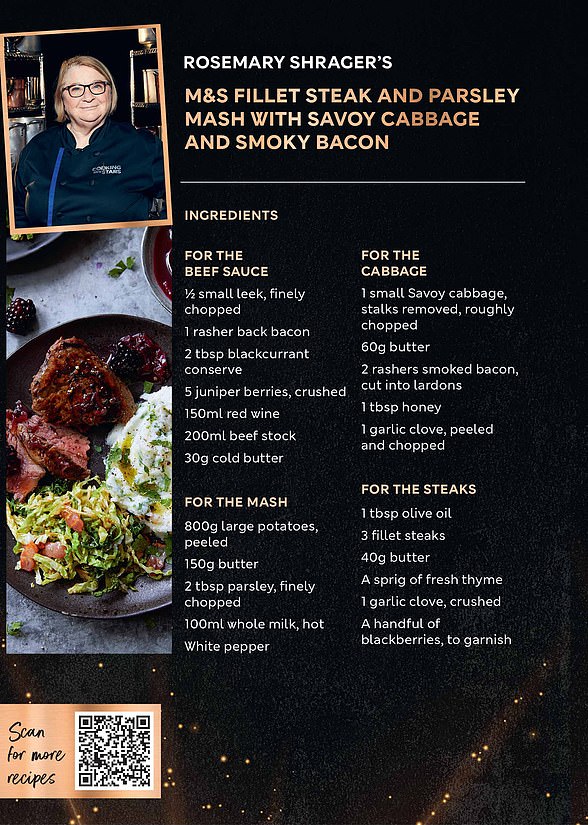 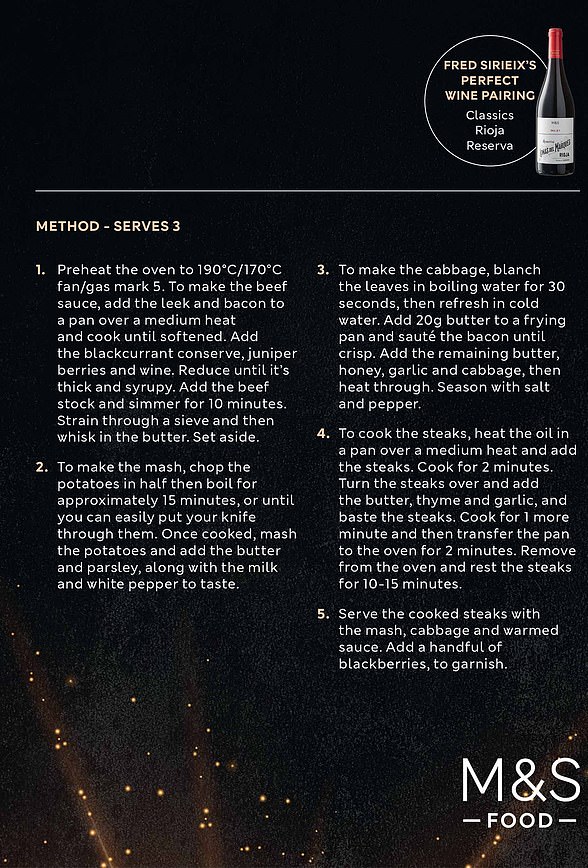 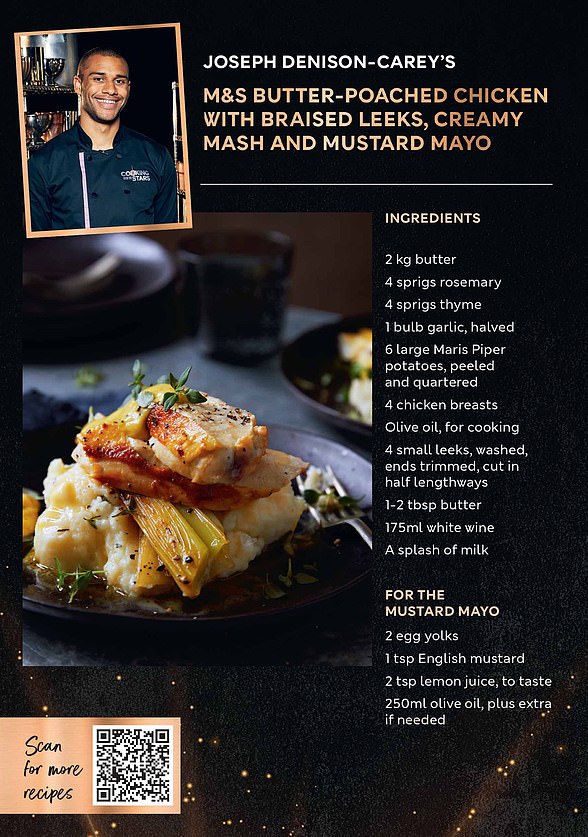 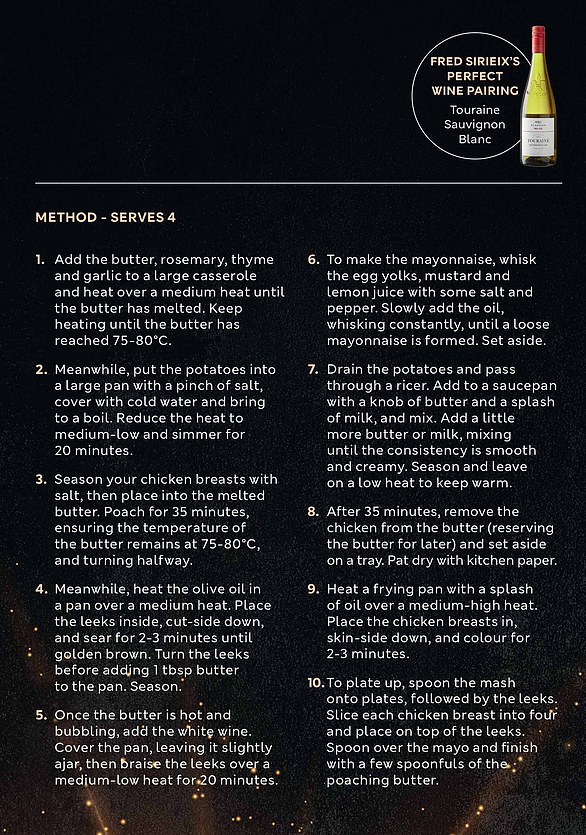 LOS GATOS, CA — A tasting room in downtown Los Gatos is closing at the end of this week. The Left Bend Tasting Room on Santa Cruz Avenue has served … END_OF_DOCUMENT_TOKEN_TO_BE_REPLACED