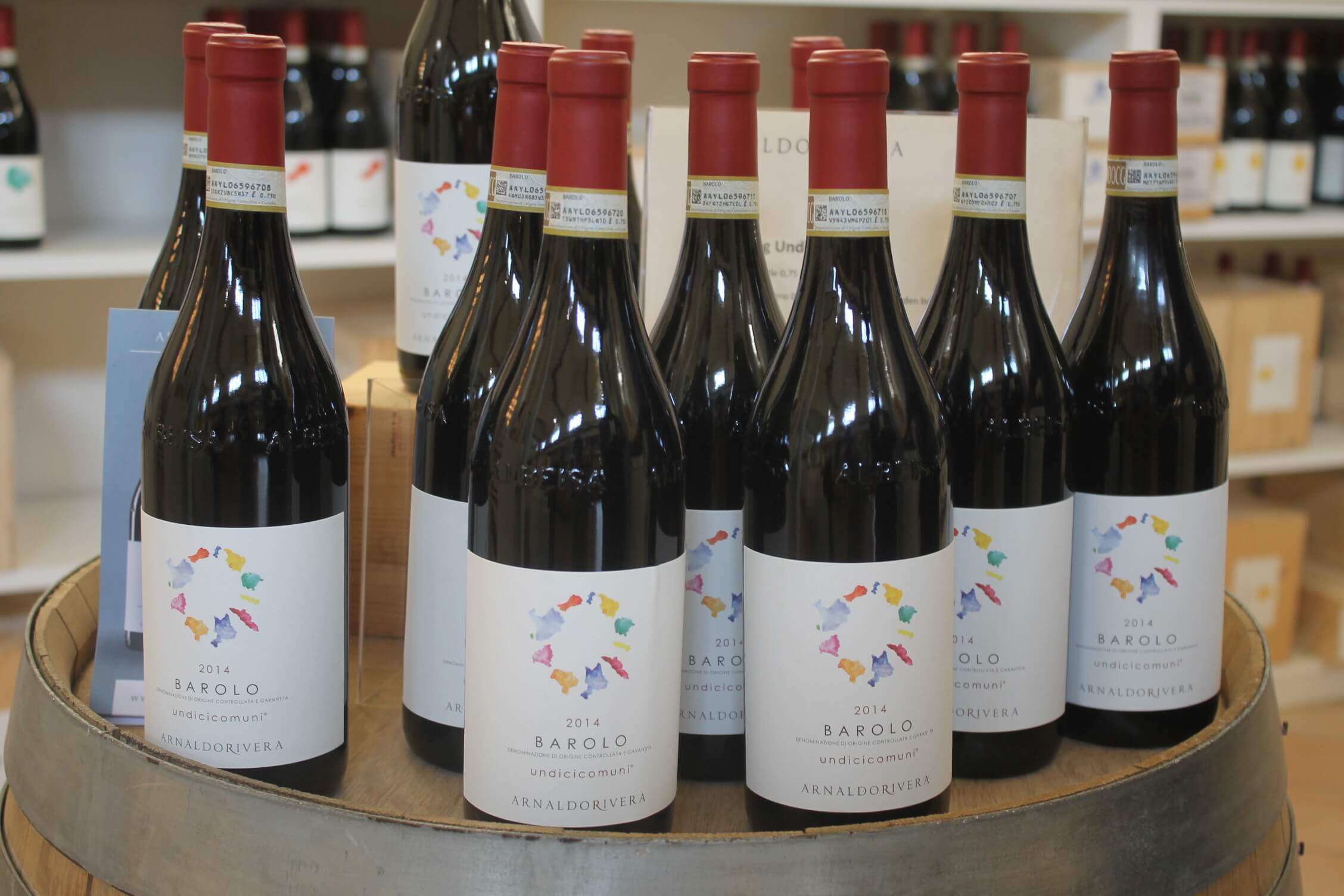 The beautiful Langhe landscape, part of Piedmont in Italy, is a prized destination of tourists from all over the world, who come here to walk through the hills shaped by centuries of growers’ activities, to eat great dishes like Plin pasta, but, mostly, to taste the incredible wine here produced from the local Nebbiolo grapes, the Barolo, Langhe’s most precious heritage.

The Barolo has existed since the early 1800s and now the heredity of the first growers has been collected by a cooperative of viticulturists called Terre del Barolo, whose director, Stefano Pesci, introduced us to the history of such a noble drink.

“The Barolo – he says – was born thanks to the will of Piedmontese noblemen to produce a wine that could be used by diplomacy to create relationships with aristocrats and politicians from all the European courts which then ruled the continent. In the early years it was a wine of the upper class, to such an extent that once Piedmont’s and Sardinia’s King received as a gift 325 barrels of Barolo by a noblewoman producing it: one barrel for each day of the year, except the Lent, when drinking wine is forbidden according to catholic tradition”.

From such a high-level, Barolo has faced gloomy challenges to its survival, amidst these the most terrible was the second World War, when the fields were neglected as their tenders went to fight.

“After the conflict, with men turned back home, Langhe’s viticolors had lost most of their grapevines and the economy struggled a lot to recover. At that time farmers from the region had to go to the nearest city, Alba, where in a big square they offered their Nebbiolo grapes hoping a bottler would have bought them to make wine. But often this didn’t happen and farmers had simply to get rid of their harvest” tells us Rosa Oberto, the deputy president of the Co-op that groups roughly other 300 producers like her, who is the descendant of a family rooted in the vineyards.

The Coop was founded in that period by Armando Rivera, who in 1965 decided to gather different little landowners and farmers to create the current cooperative. Director Pesci says “we should be grateful to Rivera. He had the vision of what Barolo could be, which is actually what it is now: a great wine well known throughout the world, where the USA is our greatest export market outside Europe.”

Rivera decided not to mechanize the production chain of the wine, preferring to restore the artisinal way that made the wine great amidst courts and noblemen 100 years before.

Terre del Barolo is very strict as regards the purity parameters of the wine.

Visiting the Coop headquarters in Castiglione Falletto, the building seems like a Cathedral, lost amidst the hills and the vineyards, where you can touch with your very hands how meticulous the producers are regarding the production.

There is a wide open-space, with columns like in a temple, where thousands of bottles are displayed in a very artistic pattern, with an entire corner devoted to the Arnaldo Rivera’s Barolo series.

“These wines are incredible because no one is exactly the same. Even if Barolo is produced in a short strip of land, roughly 16 square miles, where there are only 11 different towns, every single plot of land produces different taste in grapes according to the altitude of the hill and the different exposure to the sun” stresses Pesci, who continues, “moreover there are different kind of land in the territory, with ages different in order of million years.” This happens because of the geological aftermath of the birth of the Italian peninsula, which was once covered by the sea, whose currents had spread the material of the seabed in a way that allows today Serralunga D’Alba, one of the 11 towns, to produce 39 different crus, who are the noblest variety of Barolo.

When the crus’ grapes are collected, usually in October, they are then treated naturally to produce the must, which is then transferred to the barrels, where, depending on the desired quality of the wine, it lies for more than 38 months, and to be eventually bottled in bottles that have to repose for two more years.

“It is a work based on patience” suggests Ms. Oberto, “and you cannot do it if you’re not used to the job.”

That is why locals there do not believe any stranger can just buy a piece of land and produce a Barolo of the same quality without people born in this beautiful land, which has inspired thousands of Italian writers, from Cesare Pavese to Beppe Fenoglio, and which was the house of many rebels during the Nazi-Fascist regime.

“We know methods and tricks that a foreigner cannot understand and, as a matter of fact, there are very few other vineyards regions worldwide that share our rules. This guarantees our inclusion in Wine Spectator’s TOP 100, as well as being a Unesco World Heritage Site,” explains Ms. Oberto

“Many colleagues of ours have received extravagent offers for their land, sometimes even more than five billion dollars for relatively small plots. The would-be acquirers are often billionaires, Russian oligarchs, who see a vineyard in Italy like a holiday home, a status symbol, but for us vineyards mean family and tradition,”.

Nonetheless a great US wine company, Krause Holdings, owned by Iowa businessman Kine Krause, managed in 2016 to buy Vietti, an historic producer not associated with the coop Terre del Barolo.

But still, the workers and the experts, mostly oenologists, are always local people who worked there before. This happened because, according to Ms. Oberto, “people from outside barely know where to put their hands. Sometimes, for example, inexperienced people do not know that some plants do not have to be cut near the vineyards, because they help to give taste or water to the roots of the grapevine”.

Thus even while Langhe has become a must for international investors, because of the quality and richness of its wines, this does not change the local nature of the territory and the sense of belonging of the people living there.

“When he was young, my father went to the city to work as a plumber,” says Ms. Oberto – but then he decided to turn back home in order to work in the vineyards, a job that satisfied him a lot more. I grew up amidst those grapes he cultivated, I’ve always had a strict relationship with land, which is why today I could say, as for the rest of us, that Langhe, before being a wine-producing zone or a tourist place, is my life”.

Photo credits go to Daniele Milan, if you want to mention him.

Dario Pio Muccilli is the Star-Revue’s Italian correspondent, based in Turin. Email him at muccillidariopio@gmail.com

a word from our sponsors!

Where to find the Star-Revue

How many have visited our site?

No spam, notifications only about new products, updates.

Dreams of Jazmin Johnson – A Young Filmmaker Carrying the Torch, by Roderick Thomas

To pursue your childhood aspirations, your first dream, takes audacity and faithful conviction. For some of us, remembering our dreams gets harder as we grow into adulthood. However, for Jazmin Johnson becoming a successful filmmaker is one dream she is bringing to life. When I first learned of Jazmin Johnson, I was privileged enough to read one of her scripts.

The beautiful Langhe landscape, part of Piedmont in Italy, is a prized destination of tourists from all over the world, who come here to walk through the hills shaped by centuries of growers’ activities, to eat great dishes like Plin pasta, but, mostly, to taste the incredible wine here produced from the local Nebbiolo grapes, the Barolo, Langhe’s most precious

I met Thunder, also known as David Midthunder, through my longtime friend Jeff LoMaglio “Is Thunder going to be ok talking to me?” I asked timidly. “I’m an outsider,” I added, hoping that my interest would not come off as intrusive or inauthentic. “He’ll talk to you because you’re my friend. We’re family. It’s that simple,” said Jeff. When I

Home Videos The WORLD of WINE – Wine News. Cheap wine, tasting notes and cooking with wine The World of Wine – May 2021 … END_OF_DOCUMENT_TOKEN_TO_BE_REPLACED

How to visit Napa Valley on a Budget. In this video Carson and I explain a few ways to enjoy Napa on the cheap. Tip and advice about how to visit Napa … END_OF_DOCUMENT_TOKEN_TO_BE_REPLACED

Home Videos Get To Know Argentina Wine | Wine Folly If you love Malbec, Argentina is your ultimate wine region. But that’s not … END_OF_DOCUMENT_TOKEN_TO_BE_REPLACED