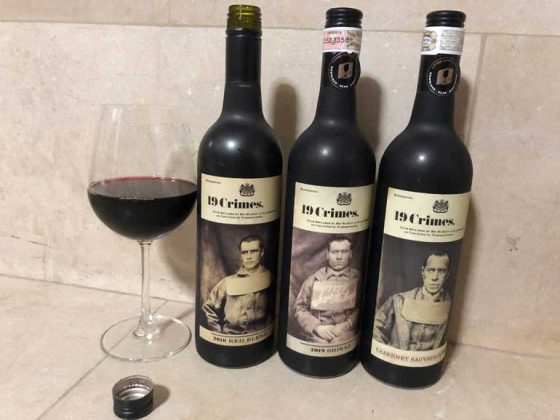 THE NAME “19 Crimes” sounds more like a book or movie title than a wine brand from Australia. Its wine labels also look like mug shots of “creepy” criminals — and the weird thing is, the photos on the labels actually are of real British criminals from the 18th century. So, instead of going with cute and relevant names and labels, usually featuring critters, castles, village or street names, 19 Crimes went the opposite way with the morbid and murky. And this is absolutely ingenuous, as 19 Crimes stands out from the zillions of wine labels competing for space in consumer’s minds and in cluttered retail shelf spaces.

THE BRAND NAME EXPLAINED
The 19 Crimes name came from the British Empire during the 18th century. These refer to the 19 specific crimes of that period that could force convicted offenders into what was called “penal transportation.”

The convicts were basically punished by being banished from society through relocation to an overseas British penal colony. Penal transportation was considered more humane than the usual capital punishment, and had been used not only on criminals, but also on military and political prisoners. Some of the 19 crimes included: grand larceny (theft of items above the value of one shilling); petty larceny (theft of items under the value of one shilling); buying or receiving of stolen goods, jewelry and plate; and even some unheard of in modern times — acts like impersonating an Egyptian, clandestine marriage, and stealing a shroud out of a grave.

Initially penal transportation saw prisoners brought to the Americas until this practice ended following the American Revolution, so the under-colonized Australia (then inhabited by the Torres Strait island people and the Aboriginal Australians) was the next destination. In January 1788, the first fleet arrived in Botany Bay but immediately moved to Port Jackson because of better conditions, landing eventually in Sydney Cove on Jan. 26 — now celebrated as Australia Day. The convicts-turned-colonists were vastly credited for building a new country, civilization, and culture, and the rest ,as they say, is history.

Crimes wines is a celebration of the emancipation of the transported convicts who contributed to what is Australia today.

WATCH LABELS COME ALIVE
The 19 Crimes wines feature actual criminals convicted of these listed 19 crimes in their mug shot-like labels. And perhaps a first of its kind, at least for wine labels, the criminals come alive when you use an augmented reality app, the Living Wine Labels. Download this Living Wine Labels app from either Google Play or Apple Store, and then point your phone at the front label and watch the criminal on the label “come alive” and tell his story. Admittedly this experience can be freaky at first, but the brilliant gimmick works and resonates.

Aside from the cool augmented reality experience, under each screw cap of 19 Crimes wines, you will see printed text about one of the 19 crimes. I do not know if any consumer wants to collect all 19 Crimes caps but it surely is another novelty to talk about.

Recently, 19 Crimes made headlines in the wine industry when it partnered with rap and hip-hop icon Snoop Doggy Dog to collaborate on its first non-Australian wine, the Cali Red, featuring Snoop Dog himself on the label. Snoop Dog has had his share of brushes with the law and may have been approached to collaborate because of this. Just as the other labels, Snoop Dog comes alive talking when you use the Living Wine Labels app. The Cali Red should be available in the Philippines next year.

MY CUSTOMARY TASTING NOTES:
19 Crimes Red Blend 2018, Southeastern Australia – “Lusciously ripe nose, jammy, rich, supple texture, with so much lavish red cherry and black berry flavors, semi-sweet, very round and sweet delicious finish”; while there is no information on the varietal blend, I suspect the mix to be a Shiraz-Cabernet blend given its taste profile.

19 Crimes Shiraz 2019, Southeastern Australia – “alluring nose like spiced rum cake, rhubarb, very plummy and juicy on the palate, super yummy from first quaff, nicely round, no frills type of wine that can immediately be enjoyed with or without food.”

19 Crimes is another fast-growing wine brand from the giant Treasury Estate Wines group. Launched initially in 2012, distribution in the Philippines started only by May of 2018. 19 Crimes is already making an impact in the tough P600-P700/bottle price range category. This year 19 Crimes ranked No. 4 in The World’s Most Admired Wine Brands by Drinks International. It is an easy wine for both novice and regular Filipino wine drinkers to appreciate because of its straight-forward fruit power, ripeness and almost candied sweetness. 19 Crimes wines are available in leading supermarkets nationwide.

Erratum: In my last column on “Defying Odds in Bordeaux,” I misspelled a few times the name of JCP Maltus’ Regional Export Manager. The correct name is Xiao Qi not Xiao Li. Also, I want to add that JCP Maltus wines, from its top brand Le Dome, Chateau Teyssier, to their other Bordeaux wines, are already available in the country via Wine Story.

The author is a member of the UK-based Circle of Wine Writers. For comments, inquiries, wine event coverage, wine consultancy and other wine related concerns, e-mail the author at protegeinc@yahoo.com or via Twitter at www.twitter.com/sherwinlao.

Home Videos The WORLD of WINE – Wine News. Cheap wine, tasting notes and cooking with wine The World of Wine – May 2021 … END_OF_DOCUMENT_TOKEN_TO_BE_REPLACED

How to visit Napa Valley on a Budget. In this video Carson and I explain a few ways to enjoy Napa on the cheap. Tip and advice about how to visit Napa … END_OF_DOCUMENT_TOKEN_TO_BE_REPLACED

Home Videos Get To Know Argentina Wine | Wine Folly If you love Malbec, Argentina is your ultimate wine region. But that’s not … END_OF_DOCUMENT_TOKEN_TO_BE_REPLACED