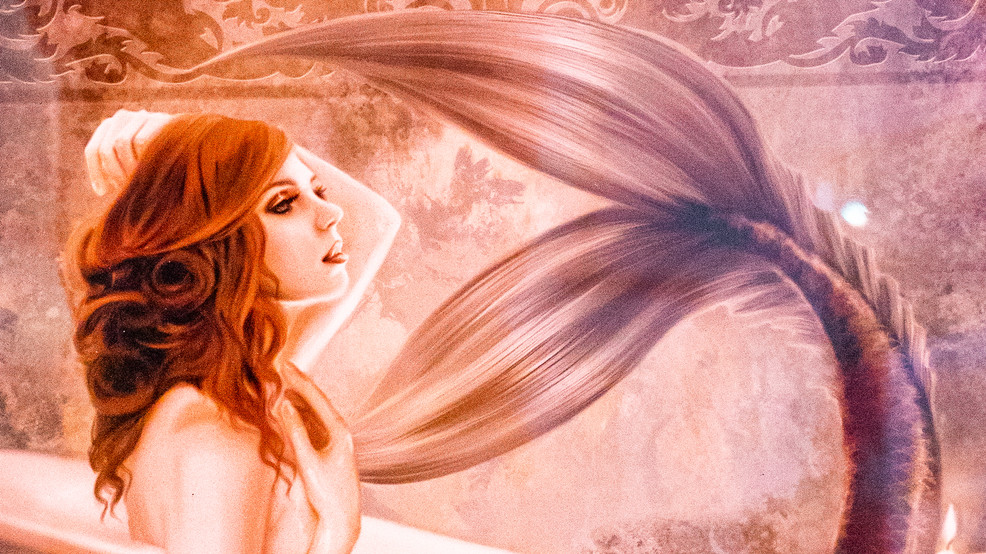 Heading out to the Washington Coast beaches always captures a magical feeling for me. And what adds even more mystical fun to time with the surf and sand? Mermaids!!

Yes, mermaids and they are in Westport, WA.

On March 29, 2021, the International Mermaid Museum opened its doors to the public. The museum, located on the grounds of the Westport Winery and Garden Resort, is a beautiful spot to stop along Hwy 105 when heading west from Aberdeen to Westport. You really can’t miss it, just look for the lighthouse, along with a roadside mermaid sculpture by local artist Yosef Adams, standing sentinel out front.

The afternoon we visited the museum, Kim Roberts, board chair and founder, met with us about her vision. She is also co-owner of the Westport Winery, adjacent Ocean Daughter’s distillery and Sea Glass restaurant.

“I always wanted to be a mermaid or a lighthouse keeper, now I can have both”, she giggles gesturing to the lighthouse tower situated behind the restaurant and wine-tasting rooms.

As we talked and looked upon the front gardens where a Petanque game (a french game much like lawn bowling) is set up along with a statue of a mermaid, a small sedan pulled up and parked. Roberts turned to both the occupants as they began to leave their car and complimented them on their attire. They were decked out in iridescent skirts with a scale-like pattern.

“I like your skirts”, said Roberts as she winked and twirled in her own matching skirt of sparkling mermaid scales. It is not uncommon for folks to dress the part when visiting the museum, unleashing their own inner mermaid. In fact, Roberts supports and encourages everyone of all ages, races, and genders to self-expression. The theme of inclusion runs throughout the museum and sculpture garden. Roberts makes sure everyone feels welcome.

The Westport Winery Garden Resort is open, free of charge, to merfolk of all ages. As we meandered the winding, whimsical garden paths situated on 15 acres, we passed by over 80 sculptures and art pieces, all by local Grays Harbor artists. Giving back to the community is an important value to Roberts, and her life resume is a testament to this. She has served on several planning committees, locally as well as statewide, and now oversees the International Mermaid Museum which is a 501-C non-profit organization.

“Funds raised by the museum are designated to provide ocean ecology curriculum and scholarships for students seeking careers in the maritime industry,” she explains. An important act of philanthropy, for both Roberts and her husband Blain made their careers in the maritime fields holding USCG captain licenses as well as owning a successful scuba diving business.

Roberts holds two degrees in architecture and design which not only is evident in the structure of the gardens but is also seen in her entrepreneurial spirit. But it is the mermaid mythology that really captivates her imagination. – Remember, she wanted to be a mermaid.

Mermaid mythology infuses its story across cultures and around the globe from New Zealand and Japan to Greece and the British Isles. It is this unifying quality of legend which attracts Roberts. Mermaid lore is a commonality bridging many cultures. It also serves as a wonderful vehicle for education, as Roberts says, “the museum is dedicated to teaching ocean ecology from seashore to seafloor”.

The moment we walked into the museum it harbored the feeling of being underwater, stepping into a magical, undersea world. The inception of the museum occurred when a friend of Robert’s sent her a detailed and varied seashell collection. One of the shells turned out to be a Murex Pecten , which is commonly known as a mermaid’s comb due to its delicate spines which resemble teeth on a hair comb.

We took our time moving from exhibit to exhibit, as there are unique artifacts and donated memorabilia in every corner from the mermaid mannequins swimming above us to a WWII diving helmet worn during a recovery effort after Pearl Harbor.

The mermaid exhibit combines myth, lore, and even Ariel, the popular Disney princess from “The Little Mermaid.” Mixed in with the glitter is also snippets of science. The museum strives to be both educational and entertaining while drawing people to the rugged beauty of the WA coast.

Combining this fictional story with fact, the exhibit displays information regarding Ariel’s best friend Flounder, who is not a flounder at all but an angelfish. The educational quotient comes in when you read on about the process of metamorphosis that fish, like flounders, undergo. As they mature, one eye will migrate across their head with the result being both eyes on the same side of their face.

Each section of the exhibit draws you in with a story like the mystical story of the Selkie or the most famous mermaid in these parts, the Starbucks Siren. Through storytelling, the exhibit educates you on sea ecology and a wide underwater world yet to be fully discovered.

After spending the afternoon with Roberts, I concluded she may live on land, spreading good works, but her spirit is all mermaid.

The museum is open daily from 11:00 am – 6:00 pm. The admission fee is $3.00 with children age 5 and under admitted free. Four times a year there will be live performances by area mermaids. Check out their Facebook page @ International Mermaid Museum, for further details.

Disclaimer: While some products, services and/or accommodations in this post were provided without charge, all of the opinions within are those of the author and the Seattle Refined editorial board.

Home Videos The WORLD of WINE – Wine News. Cheap wine, tasting notes and cooking with wine The World of Wine – May 2021 … END_OF_DOCUMENT_TOKEN_TO_BE_REPLACED

How to visit Napa Valley on a Budget. In this video Carson and I explain a few ways to enjoy Napa on the cheap. Tip and advice about how to visit Napa … END_OF_DOCUMENT_TOKEN_TO_BE_REPLACED

Home Videos Get To Know Argentina Wine | Wine Folly If you love Malbec, Argentina is your ultimate wine region. But that’s not … END_OF_DOCUMENT_TOKEN_TO_BE_REPLACED