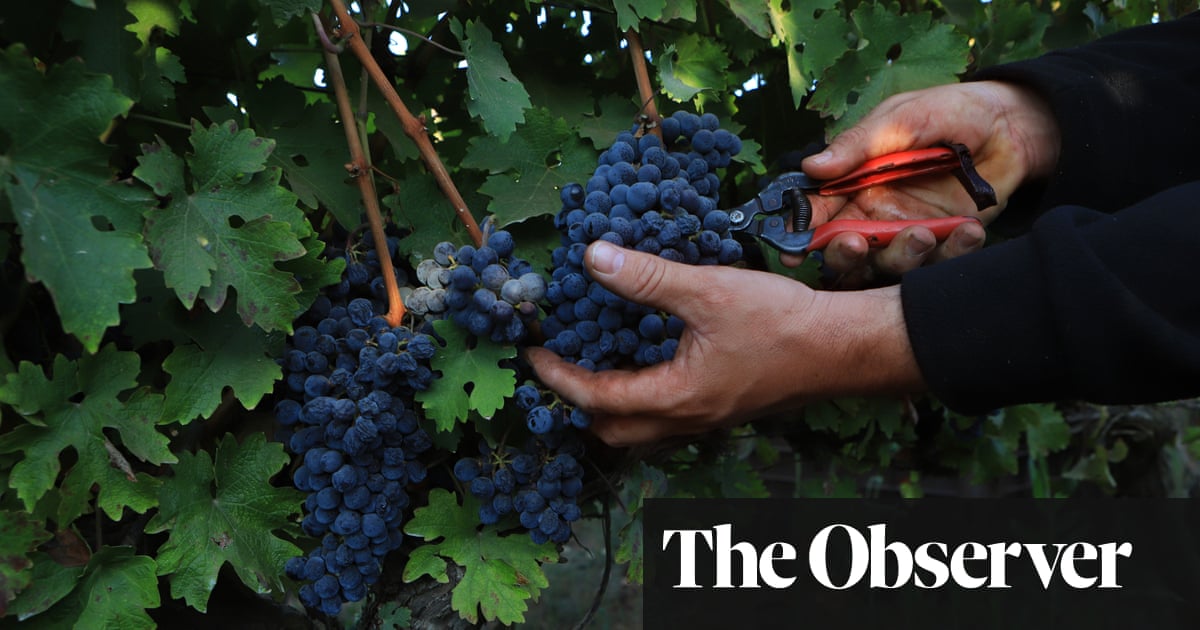 Nu.Vo.Té, Vin de France 2020 (£9.95, fieldandfawcett.co.uk) The world is not short of wine grape varieties. Wine Grapes, the magnificently authoritative reference book on the subject published in 2012, features some 1,368 of them. France alone officially recognises 250. All of which might make you wonder why we need more. Certainly that’s what some French winemakers were asking when a quartet of new varieties developed by France’s National Institute for Agriculture Research (INRA) and the Institute of Wine and the Vine (IFV) were formally permitted in French vineyards in 2018. The critics were concerned that these new varieties, which were specifically developed to be resistant to disease, would eventually displace less hardy, but tastier, traditional varieties. Time will tell, but my first taste of wine produced from two of the new varieties – artaban and vidoc grown in the Languedoc – suggests they can make an attractively light and juicy black fruited red.

Beyerskloof Pinotage, Western Cape, South Africa 2019 (£8, Sainsbury’s) Some criticism of the INRA and IVF’s ResDur programme has a distinct bouquet of anti-vaxx about it: there’s a sense that any intervention by hard science in this artisan business is to be feared and dismissed in almost-conspiratorial terms. Really, though, this is a continuation of the sort of thing that has been happening in vineyards for centuries. The prime example is the discovery that European grape vines could be made resistant to the phylloxera louse that had all but destroyed Europe’s vineyards in the late-19th century if they were grafted on to American rootstocks. But there’s a long history, too, of scientists crossing varieties to create new varieties with the best qualities of their parents. South Africa’s signature, pinotage, for example, was created when University of Stellenbosch professor of viticulture, Dr Abraham Perold, sought to pair the vineyard hardiness of cinsualt with the vinous finesse of pinot noir in1924. Almost 100 years later, producers such as Beyerskloof have mastered its smoke-inflected, berry-scented charms.

New Hall Bacchus, Essex, England 2019 (£11.50, newhallwines.com) Before English winemakers discovered what they could do with pinot noir and chardonnay, they mostly dealt in a hotchpotch of obscure crossings and hybrids. Many were developed by French and German horticulturists and grape scientists in the mid-20th century to withstand the sort of challenging conditions you might find in a typical English summer. And, although I’m not sure that anyone would have planted the likes of rondo or regent if they didn’t feel it was their only choice, some of these early plantings have proved inspired. I’m a big fan of the utterly distinctive, finely poised, racy sparkling wines that Peter Hall makes from seyval blanc, a French hybrid of European and American vines, in his Breaky Bottom vineyard in the South Downs near Lewes. But the most successful is probably bacchus, a 1930s crossing of two varieties (a riesling-silvaner cross with müller-thurgau) from the Pfalz region of Germany, that, in fragrant, green-energetic dry white wines such as New Hall’s, are England’s answer to sauvignon blanc.

Home Videos The WORLD of WINE – Wine News. Cheap wine, tasting notes and cooking with wine The World of Wine – May 2021 … END_OF_DOCUMENT_TOKEN_TO_BE_REPLACED

How to visit Napa Valley on a Budget. In this video Carson and I explain a few ways to enjoy Napa on the cheap. Tip and advice about how to visit Napa … END_OF_DOCUMENT_TOKEN_TO_BE_REPLACED

Home Videos Get To Know Argentina Wine | Wine Folly If you love Malbec, Argentina is your ultimate wine region. But that’s not … END_OF_DOCUMENT_TOKEN_TO_BE_REPLACED