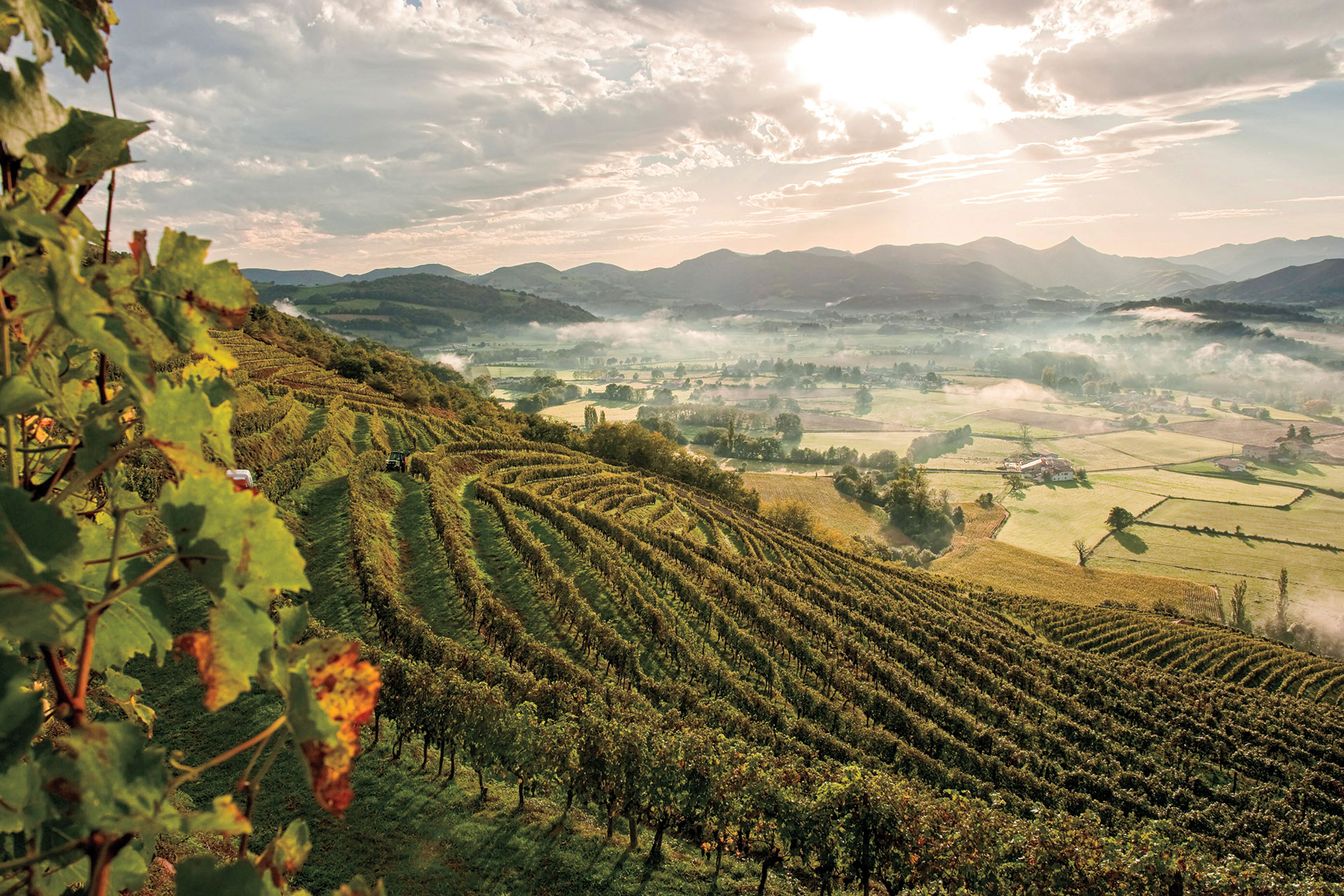 Ancient vines are an undeniable link between place and grape, and they serve as the bedrock of wines from Southwest France. Many of these grew wild; others found places where they would thrive after Roman soldiers or medieval troubadours carried them through hills and valleys.

Eventually, some of these indigenous varieties traveled the world. Grapes like Cabernet Franc, Merlot, Malbec and Tannat are rooted in this hidden gem of a region.

The Southwest’s native niches are bound by the Atlantic to the west and approach the Mediterranean in the east. They follow rivers from the Pyrenees border with Spain and the Massif Central northwest to Bordeaux and Bayonne.

This land also holds stories of grapes rarely found elsewhere, the cast of which is enormous.

Some of these varieties have the makings of international fame, like aromatic white Petit Manseng and red Fer Servadou. Others are tiny productions from old vines made by obsessed producers.

Some local varieties that all but disappeared are now being revived by growers who revel in the DNA of their local grapes and vineyards. They seek to modernize tradition, not break with it. Such rediscoveries are met with great excitement.

In Gascony, near the western edge of the Southwest, the local cooperative, Plaimont, identified an ancient vineyard that was being farmed by one of its members and campaigned for it to be declared a French historic monument.

The cooperative is also behind an astounding experimental conservatory vineyard of forgotten and even completely unknown vines, called the Conservatoire Ampélograhique.

Microvinifications, small batches that test what’s possible, are made from many of the 37 varieties highlighted. Two grapes, Manseng Noir and Tardif, have even been turned into commercial wines.

These and other growers working within the region’s largely unknown vineyards have proven that they don’t need international varieties or fashions to follow—they have their own grape varieties and unique wine styles. Read on to learn about some of the rare and native gems they’re using to create Southwest France’s most distinctive bottlings.

Petit Manseng is arguably one of the finest white grapes in France. It produces the most ethereal sweet wines and, at the other end of the scale, makes rich, dense and powerful dry whites.

When tasting a sweet Jurançon, made from 100% Petit Manseng that’s grown in vineyards in the foothills of the Pyrenees Mountains, the first thing you might notice is a range of flavors from lime to nectarine, sugar and honey.

The next thing that presents itself is acidity, which prevails no matter how sweet or rich the wine. It creates something that is mineral, complex and seriously ageworthy.

Sweet Jurançon is produced from small, concentrated, non-botrytized berries that can stay on the vine until December.

In Jurançon Sec, the dry version, Petit Manseng is often partnered in smaller parts with its cousin, Gros Manseng, named such because of its bigger berries. The result is wines that are ripe, rich and concentrated in notes of nuts and spice, but they retain the grape’s inherent acidity. This quality, partnered with the wine’s concentration, allows them to age well.

All 160 acres of Southwest France’s Petit Courbu are grown in Gascony and the appellation of Pacherenc du Vic-Bilh, which translates to “vineyards in the country.” The area is better known for being home to the Tannat vineyards of the Madiran appellation.

Many of the same producers known for powerful Madiran reds also make a small amount of white wine, mainly Petit Courbu blended with Petit Manseng. They work with the variety for good reason: This is a grape that should be better known, as the wines are elegant, aromatic and rich.

Dry bottlings of 100% Petit Courbu, like one made by leading Madiran producer Alain Brumont, reveal ripe pear and nutmeg flavors, with intense acidity and a texture reminiscent of apple skins.

Sweeter versions have touches of botrytis as well as honey and dried fruits. Blends made in a dry style bring in honey and kiwi for a sweet yet crisp impression.

In the lexicon of unusual grape names in the Southwest, this one rates fairly high. Known in the local dialect as L’En de l’El, Loin de l’Oeil translates to “far from the eye.” The variety’s bunches are on long stalks far from the bud, or eye.

Gaillac, northeast of Toulouse, is the home of Loin de l’Oeil. A hotbed of unusual grapes, a range of wine types and styles are produced there, but this is a true specialty, and shines when showcased in the area’s sweet wines and dry blends.

Dry versions of the variety yield light yet delicious apple and citrus as well as spice aromas and flavors. If blended with Mauzac, its usual partner, minerality and white stone fruits come into play within a richer, more full-bodied style.

This is the chameleon white grape of the Southwest. Whatever style it is that you seek, Mauzac can supply it. There are dry, sweet and sparkling wines, of course, but one style in particular is a Gaillac specialty: méthode ancestrale.

Gaillac méthode ancestrale sparkling wines are produced from a technique that extends at least to the 16th century.

It calls for the wine to be bottled before the first fermentation is finished. It’s a low-cost and risky method, as bottles can explode, but it leads to a low-alcohol, medium-sweet sparkling wine ideal for apéritifs. With high acidity and crisp fruit flavors, Mauzac is perfect in these pours.

Apart from that delicious exception, Mauzac also shines in dry wines, both still and sparkling. It often boasts floral aromas as well as ripe pear and melon flavors, with a light touch of pepper. Sparkling wines that have some age offer mature almond flavors that soften the grape’s natural acidity.

Négrette is a grape with distinct personalities. It can be soft, supple and fruity, ready to enjoy young; it’s been described as the “Beaujolais of Toulouse.”

On the other hand, it can also make ageworthy, rich, wood-aged wines, sometimes blended with Syrah, Malbec or Cabernet Sauvignon.

Go to a bar in the city of Toulouse, and it’s the local fruity wine served by the glass. In a wine shop, you can encounter the more heavy-hitting pours. As you leave town, you pass the vines as the road climbs out of the Toulouse basin going northwest.

Like so many of the varieties in Southwest France, Négrette is a very site-specific grape. It’s planted almost exclusively in the Fronton appellation, where it appreciates the hot and relatively dry climate.

Négrette produces wines that are instantly attractive, with violet aromas, black plum flavors and often a plush, generous texture. The pricier wines, aged in wood and boasting more pronounced tannins and black-fruit tones, have more intensity and structure, which allows them to mature well for five years or more.

The Southwest seems to specialize in the rescue of grape varieties from oblivion, following the theory that you never know what they could do if they are not given the chance. Abouriou is a prime example.

The grape almost disappeared in the early 1800s and was rescued later in the century. It remains pretty experimental, with less than 900 acres in production.

Almost all of those vines are in a small appellation that was also revived, thanks to an enterprising cooperative and a handful of growers who have now begun to promote Abouriou as their own unique offering.

The area, called the Côtes du Marmandais Appellation d’Origine Protegée (AOP), is just southeast of Bordeaux and is planted mainly with Bordeaux varieties.

But Abouriou, with its distinctive dark color, light acidity and juicy black fruits pierced by an herbal character, shines in every blend where it’s found, as well as in the few 100% Abouriou wines from the region.

Duras is a grape variety whose roots may date as far back as the 15th century. It’s fairly unadventurous, having almost never left the vineyards of Gaillac and Millau, northeast of Toulouse.

If you seek a deeply colored, high-alcohol and somewhat rustic wine, however, Duras is your grape. Those characteristics are also why it’s rare to find it on its own. But blend it with Braucol (Fer Servadou) or Syrah, and it adds power and backbone to the final wine.

Duras is often the reason why the reds of Gaillac can age so well, thanks to its penchant for providing firm structure and longevity.

The variety is direct and assertive, yet it speaks of place, with sappy tannins and black fruits warmed by the same Mediterranean breezes that are such an influence in both Gaillac and Millau. It yields classic Southwest wines, with a taste that could only come from one place. Perhaps that’s why Duras never traveled.

This grape has quite an identity crisis. In Gaillac, it’s known as Braucol. In Madiran, it goes by Pinenc. In Marcillac, it’s Mansois. The name Fer Servadou seems reserved for when it’s grown in the Garonne and Dordogne valleys. These names highlight the intense regionality of vines in the Southwest.

Like so many grape varieties here, Fer Servadou is ancient, likely domesticated from wild vines. For a long time, its ancestry showed in poor clones. Recent improvement in clonal selection, however, has created an equal improvement in the resulting wines, and its popularity has grown across the entire region.

Today, it’s generally blended with other local varieties like Tannat in Madiran, or Duras in Gaillac, though it occasionally surfaces as a 100% varietal wine. Such bottlings exhibit black-fruit characteristics, structured tannins, spice and smoky flavors.

Home Videos The WORLD of WINE – Wine News. Cheap wine, tasting notes and cooking with wine The World of Wine – May 2021 … END_OF_DOCUMENT_TOKEN_TO_BE_REPLACED

How to visit Napa Valley on a Budget. In this video Carson and I explain a few ways to enjoy Napa on the cheap. Tip and advice about how to visit Napa … END_OF_DOCUMENT_TOKEN_TO_BE_REPLACED

Home Videos Get To Know Argentina Wine | Wine Folly If you love Malbec, Argentina is your ultimate wine region. But that’s not … END_OF_DOCUMENT_TOKEN_TO_BE_REPLACED