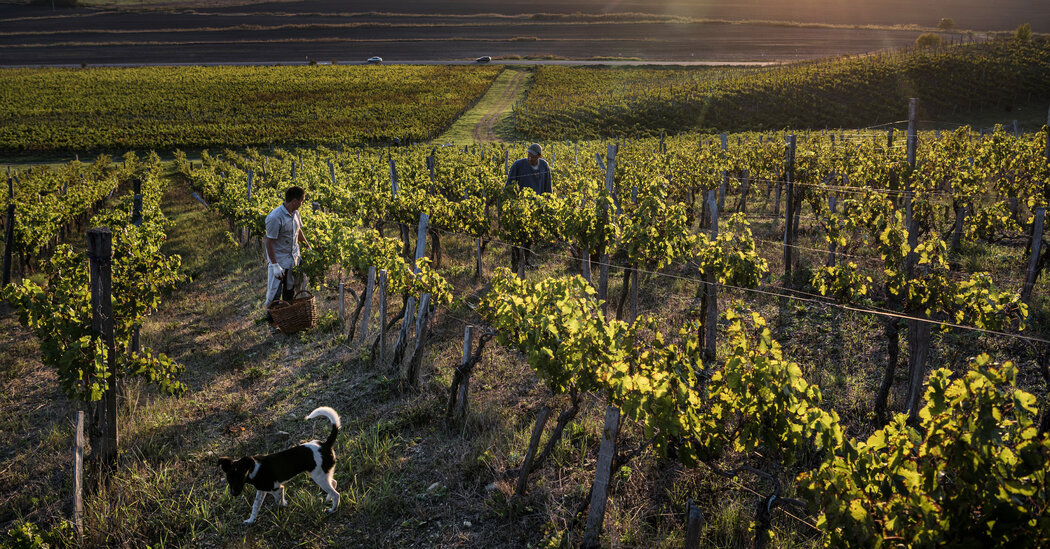 ANAPA, Russia — Russia has no shortage of innovators, risk-takers and freethinking entrepreneurs. But their country is not built for them. Sooner or later, the state security apparatus makes its unwelcome appearance.

Visit the velvety slopes dipping down to Russia’s verdant Black Sea coast, and you will see that this applies even to wine.

Vladimir Prokhorov, bespectacled and profane, has been making wine from the grapes bulging off the vines for 30 years. He has never been abroad, let alone to Portugal, but his Madeira is magical. His cellar is his shrine, where an icon of Jesus sits next to the thermometer, and where he and his wife never set foot when they are in a bad mood.

But the oak barrels — marked in chalk “2016 Muscat Hamburg,” “2016 Cahors” — now make a hollow sound when you tap them. The police showed up last summer at his winery in southern Russia and drained them all.

“I hate them,” Mr. Prokhorov said, referring to the authorities, slamming his left fist into his right palm. “I hate them with a fierce loathing.”

On first glance, the rebirth of Russian fine winemaking, catering to well-off Russians’ more refined tastes, is a Putin-era success story. But beyond the vines, a darker and very Russian tale of big dreams, dashed hopes, bureaucratic nightmares and police raids comes into view.

Many of Russia’s smallest and most innovative winemakers, with the informal approval of local officials, long operated without licenses, considering them prohibitively cumbersome and expensive. Then, about two years ago, the federal authorities started cracking down, bringing the easy boom years of the country’s upstart vintners to an end.

Russia covers almost seven million square miles of territory, most of it frozen year-round, and much of the soil yielding little except cloudberries, lingonberries and the odd mammoth tusk poking out of the thawing ground.

But then there is a sliver, from the Caucasus foothills to Crimea, where the softly undulating, deep-green land, glowing beneath the warm autumn sun, is reminiscent of a Tuscan afternoon. The ancient Greeks made wine around here, and so did the czars, who brought in French expertise.

The Soviets collectivized the vineyards and turned winemaking into industrial-scale enterprises like that chateau of the proletariat, Kubanvinogradagroprom.

In wine-rich areas like the resort city of Anapa, there were once vending machines dispensing chilled riesling by the cupful. At home, in their basements, people finessed their own small-batch techniques.

Nowadays, the Black Sea coast is an oenophile’s dreamland, attracting people from across the country who want to try making their own wine in its rocky soil. Most of the major European grape varieties, along with obscure Soviet-developed ones and indigenous types like Krasnostop Zolotovsky, are grown here.

So it makes sense that a section of the annual agricultural fair in Russia’s southern breadbasket region, Krasnodar Krai, is devoted to wine. But there was something odd in the cavernous convention hall in Krasnodar, the region’s main metropolis, when I visited the fair in early October: The men peddling their merlots and sauvignon blancs seemed very wary of journalists.

By way of explanation, Andrei Greshnov, a former Moscow banker, pointed to his bottles. There were no excise stamps, typically required for alcohol sold in Russia.

Getting licensed for making and selling wine had long been too costly for small-scale producers like Mr. Greshnov. So he and dozens of others operated outside the law, with a wink and a nod from local officials, who saw them as part of the region’s identity and also drank their wines. But in the last two years, Russia’s federal law enforcement authorities have intruded on these arrangements.

“We understood that these were green shoots that needed to be supported,” Emil Minasov, a senior official in the Krasnodar region’s Agriculture Ministry, said of the unlicensed winemakers. “They were able to strike deals with local administrations to be left alone. Now this has become impossible. They’ve been squeezed, to put it bluntly.”

Law enforcement officials say they are combating tax avoidance and counterfeit and unsanitary production, which are indeed problems in Russia. Recent changes in the law are supposed to make it easier for small wineries to be legal.

But Mr. Minasov calculates that wineries still need to produce at least 40,000 bottles a year just to cover the expense — $6,000 at a minimum — of getting licensed and, more problematically, of keeping up with the reams of building regulations and reporting requirements. He added that he believes small-scale wineries should not be required to be licensed at all, “but they don’t listen to us up above.”

On a hillside by the sea, Ivan Karakezidi, a descendant of Greeks who goes by Yannis, was on the phone with yet another lawyer. Since the 1990s, Mr. Karakezidi, 64, has been one of the region’s best-known small-batch vintners and entertainers, hosting parties on his sprawling compound, which evokes a Mediterranean village.

The police swooped in on the compound at 6 a.m. on a June morning, climbing over the fence, he says, and seized 4,545 high-end bottles, including his prized 2003 cabernet sauvignon. His son faces jail time, allegedly caught in a sting operation for selling unlicensed wine. Mr. Karakezidi insists he is the victim of a scheme by well-connected businesspeople to gain control of his choice vineyards.

If his legal woes deepen, he is prepared to leave the country. “It’s counterproductive to do business here,” Mr. Karakezidi said. “No matter what, they will convict you, lock you up, take it all away and envy you.”

Before he leaves, he will show those who take over his property “where the tasting room is and where the toilet is, so they don’t get them mixed up.”

Some small winemakers have managed to get licensed, but they question whether they will be able to make a living.

Olga and Vadim Berdyayev’s breezy courtyard on the outskirts of Anapa was suffused on a recent afternoon with the rich, yeasty scent of fermenting grapes. A neighbor helped them pour buckets of cabernet franc into a press while Mr. Berdyayev, in his garage lined with steel vats, checked the density of this year’s riesling in a test tube.

The couple, both architects, brewed beer in their home region, Siberia, and discovered winemaking when they moved to the Black Sea coast 12 years ago. Making a wine is like raising a child, Ms. Berdyayeva said: Sometimes it gets sick, and you have to treat it, and sometimes it shows talent, “and you start to marvel and wonder.”

They sold at fairs and to travelers on winery tours. But two years ago it became clear the good times were over: The government let it be known that even the tiniest wineries had to get licenses. That meant spending around $7,000 on paperwork, ventilation and a specialized scanner for excise stamps; submitting to strict controls and inspections; and tracking every bottle produced with specialized government software and unique 19-digit codes.

Ms. Berdyayeva quit her job to focus on the bureaucracy, and the couple got their license. But rather than being comforted, Mr. Berdyayev says he now lives in constant fear of inspections or a paperwork mistake. His stress echoed the cri de coeur of many Russians struggling with the unchecked power of the police.

“I’m in this constant state of tension, that, God forbid, I will do something wrong,” he said. “Sometimes I no longer understand the wine, and think I am ruining it. And this is truly depressing.”

Home Videos The WORLD of WINE – Wine News. Cheap wine, tasting notes and cooking with wine The World of Wine – May 2021 … END_OF_DOCUMENT_TOKEN_TO_BE_REPLACED

How to visit Napa Valley on a Budget. In this video Carson and I explain a few ways to enjoy Napa on the cheap. Tip and advice about how to visit Napa … END_OF_DOCUMENT_TOKEN_TO_BE_REPLACED

Home Videos Get To Know Argentina Wine | Wine Folly If you love Malbec, Argentina is your ultimate wine region. But that’s not … END_OF_DOCUMENT_TOKEN_TO_BE_REPLACED