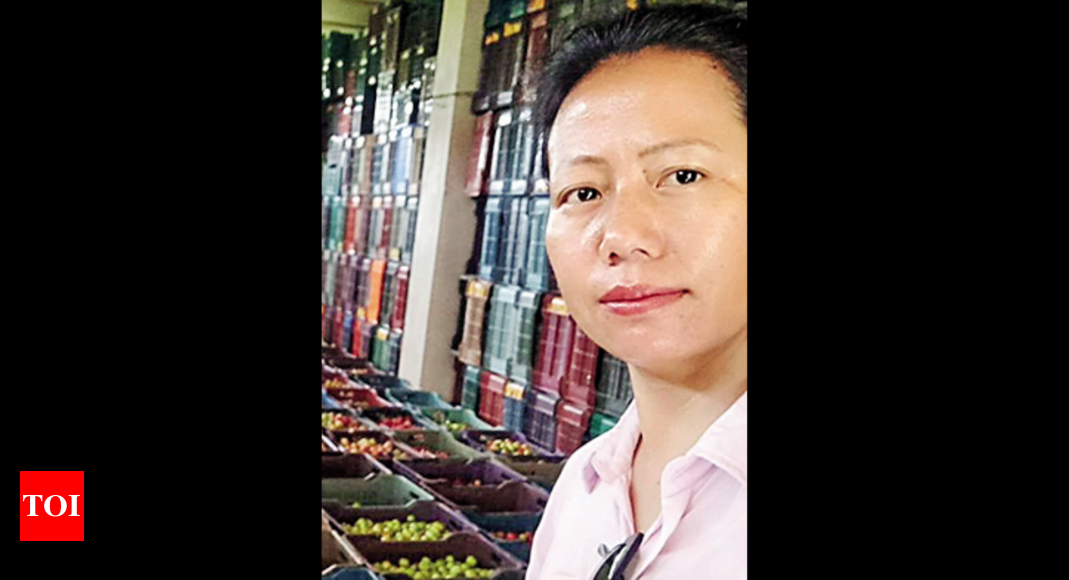 Tage Rita at her winery in Ziro Valley

GUWAHATI: In the mountains of sleepy Ziro Valley in Arunachal Pradesh’s lower Subansiri district, a silent mission is underway to use abandoned fruits for making wine.
Tage Rita, an agriculture engineer who made a mark globally by producing kiwi wine locally from the Ziro Valley a few years ago, launched wine made from plum and pears — huge volumes of which were being wasted.
Her previous venture of kiwi wine was much applauded in the Agricultural and Processed Food Products Export Development Authority (APEDA) gallery at the Thessaloniki International Fair 2019 in Greece, many are hopeful that the wine made of plum and pears would take Ziro Valley to a new level of wine making from indigenous produces. “We are bringing out these fruit wines in Arunachal Pradesh in the first two batches and will then expand to the whole of northeast and other parts of India,” Rita told TOI.
While the raw materials are being collected from all rural farmers, who are traditionally growing these fruits for long, she was hopeful that with the expansion of the winery, locals will only benefit after selling these fruits to them.
The agriculture and horticulture department of Arunachal Pradesh is facilitating in getting organic certification for kiwi fruits and slowly they are working for other fruits that are of late being exported to global markets.
Also, the state government is coming up with a conducive and entrepreneur-friendly state wine policy for any winery using locally grown fruits where they are going to give tax exemption for certain years.
“The response of kiwi wine was tremendous. Our NAARA AABA (brand) created its own USP of being an exotic fruit (organic kiwi) wine among wine enthusiasts. APEDA, government of India, took the organic kiwi wine to international exhibitions. We received numerous business enquiries from national and international houses. Currently, commercial exports are yet to take off, the final talks are on for a few ASEAN and middle eastern countries. This pandemic has delayed the process,” Rita added.
Commercial exports of plum and pears wine may open up a new horizon for residents of Ziro Valley for whom the abundant fruits could not change their destiny for ages.
Tanyang Nyipa, a resident of Lower Subansiri, who sold pears in bulk to the winery, said, “Our family has sold about 12 quintal of pears to the winery run by Rita. Lots of fruits were being spoiled with huge quantities, which eventually became food for pigs. The pandemic has taught a new lesson of becoming self-dependent with local produces.”

Home Videos The WORLD of WINE – Wine News. Cheap wine, tasting notes and cooking with wine The World of Wine – May 2021 … END_OF_DOCUMENT_TOKEN_TO_BE_REPLACED

How to visit Napa Valley on a Budget. In this video Carson and I explain a few ways to enjoy Napa on the cheap. Tip and advice about how to visit Napa … END_OF_DOCUMENT_TOKEN_TO_BE_REPLACED

Home Videos Get To Know Argentina Wine | Wine Folly If you love Malbec, Argentina is your ultimate wine region. But that’s not … END_OF_DOCUMENT_TOKEN_TO_BE_REPLACED