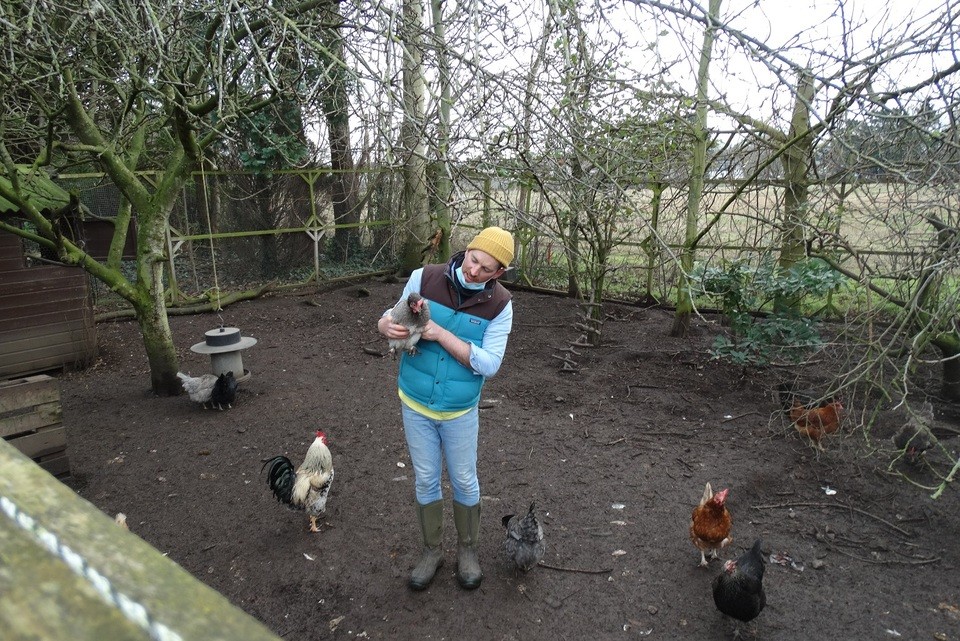 Rossa Cassidy slides open the door of the DIY dehydrator.

A luscious bunch of rosemary sits on the middle shelf of the two-foot-tall wooden box. A light bulb gently heats the herbs for 24 hours at 35 degrees, Cassidy says. “It’s basically a drying rack.

There is a woody herb smell inside the cabin which sits at the entrance of Elmhurst Cottage Farm, a one-acre urban farm in Glasnevin.

He crosses to the other side of the cabin. “This in a closed jar will retain its flavour for a very long time,” Cassidy says, picking up a large mason jar packed with dried sage.

The brittle herb crackles in his hand.

Cassidy intends to turn his hand to preserving more fresh produce over this coming year.

Many of the restaurants and cafes that the farm used to supply have had to close during the pandemic.

Making his produce more durable may help weather an uncertain year ahead, he says. “This year I’m going to focus on what I know I’ll be able to sell.”

In 2017, Cassidy took over Elmhurst Cottage Farm, an oasis which lies just off the bustle of Ballymun Road behind the south-west corner of Albert College Park in the north of the city.

“So we are still very much in the learning process,” Cassidy says, who runs it full-time.

The acre it sits on was a walled apple orchard until Cassidy’s friends built a polytunnel. Gradually, it was converted into an urban farm.

Cassidy uses no pesticides or herbicides, he says. “We just keep everything clean and natural.”

He’s dressed in wellies, a blue gilet, and a woolly hat. The air is nippy on this Friday morning in January.

“I’ve always been into food,” he says. At 14 years old, he worked as a kitchen porter in a pizzeria.

In his early twenties, a neighbour gave him some fresh herbs and tomatoes that he grew in his garden.

Going back to shop in supermarkets is hard once you have savoured a homegrown tomato or fresh garden salad, he says. “The flavour is just not comparable.”

He steps into a chicken coop to collect some eggs. A big cockerell, Rodrigo, clucks loudly at Cassidy. “Excuse me,” Cassidy says, to the bird.

Elmhurst Cottage Farm supplies cafes, restaurants and shops all around Dublin – including the Fumbally Café, Lilliput Stores, the Cake Café, and Slice.

When a bunch of them closed last year because of Covid-19, Cassidy was left with way fewer businesses to sell to.

He put his crop of edible flowers into salad packs to sell at markets rather than restaurants. “Obviously you don’t get as good of a turn around for yourself,” he says.

In normal times, Erasmus students would help on the farm with seeding and planting, harvesting and de-weeding, bee-keeping, and chicken-keeping, but they couldn’t come this year.

Cassidy had to focus on tending to the produce that he had already planted rather than planting more, he says.

Planting and harvesting potatoes is a massive job, he says. “That was one thing I thought, I’m going to need to concentrate more on herbs and salads rather than potatoes.”

“I had to focus my energy on what the restaurants” – those still open – “wanted and needed and get that into them rather than general upkeep of the place,” he says.

At the entrance to the polytunnels, Mollie the cat squints her eyes in the low winter sunlight.

That includes apples from the trees, dotted about the urban farm. The trees are short with wide branches. Some are more than 200 years old, says Cassidy.

“This is another good way of preserving,” he says, in front of a juice press in the cabin at the farm entrance.

The press looks like a guillotine. It squeezes the juice out of layers of apples. The juice is then pasteurised and preserved.

Cassidy plans to make herbal tea with the dried rosemary, he says. With sage or mint too.

He plans to plant fruits that can be preserved, too. Like berries for jams.

Grapes in the polytunnel can be made into vinegar, he says. “It’s the same as making wine basically but just really bad wine.”

Making new products means Cassidy will have to learn new skills. “Packaging, marketing, and all that kind of stuff. Trying to find people to supply to.”

But he isn’t overwhelmed by the challenge, he says. “I think that you have to get out of your comfort zone and accept that we have to change things here.”

Home Videos The WORLD of WINE – Wine News. Cheap wine, tasting notes and cooking with wine The World of Wine – May 2021 … END_OF_DOCUMENT_TOKEN_TO_BE_REPLACED

How to visit Napa Valley on a Budget. In this video Carson and I explain a few ways to enjoy Napa on the cheap. Tip and advice about how to visit Napa … END_OF_DOCUMENT_TOKEN_TO_BE_REPLACED

Home Videos Get To Know Argentina Wine | Wine Folly If you love Malbec, Argentina is your ultimate wine region. But that’s not … END_OF_DOCUMENT_TOKEN_TO_BE_REPLACED