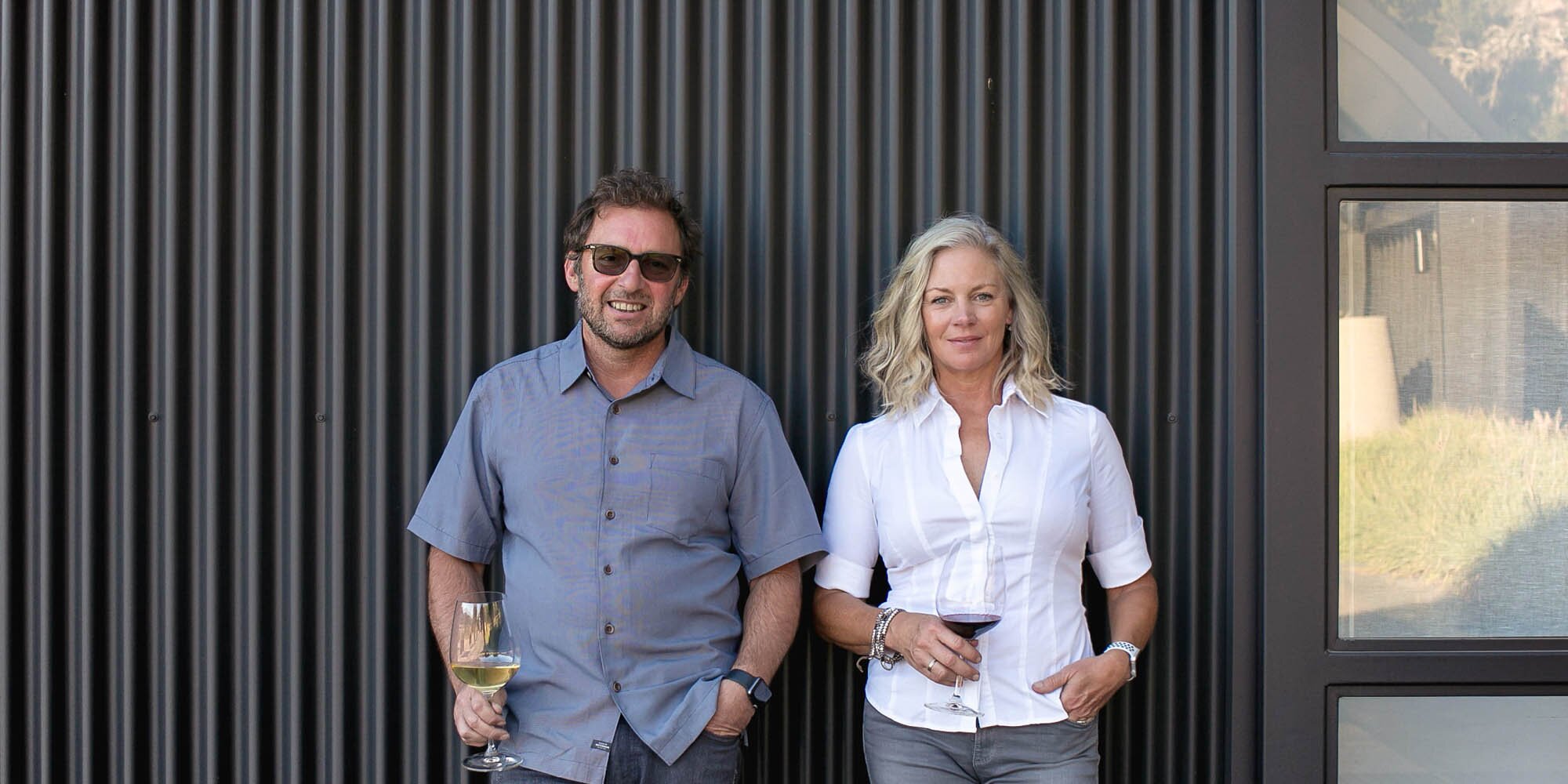 Winemaker Philippe Melka couldn’t make a bad wine if he tried. He’s the wine-world equivalent of an NBA All-Star who’s won numerous Championship games—in his case, a string of 100-point scores—and played for all the best teams, which in the world of wine is like being the winemaker for a bevy of wealthy, high-end clients.

This past December, I paid an outdoor, distanced visit to Philipe and his wife Cherie at Melka Estates, their winery in St. Helena, California. After side-stepping around a charming, slobbery dog, and just before flipping on a tape recorder, I suggested holding off on pouring any wine. I wanted their full story: from childhood until 4:30 p.m. that day when the interview was scheduled to wrap up.

Read More: This Is the Best Gas Station Winery in Napa

“Man, you’re going hardcore,” said Philippe, laughing. “I like it. But I need some wine.” Sylvie Laly, Director of Melka Estates, poured us a purple-hued red, with aromas teasing me from two feet away.

Born in the city of Bordeaux, but raised amidst corn and tobacco fields south of the city, he eventually returned to metropolitan life and enrolled in the University of Bordeaux to study geology, advancing toward a Masters in Agronomy and Enology. He’d taken a research internship at Château Haut Brion to study soils (not winemaking). A chance encounter with Jean-Claude Berrouet, the technical director for Christian Moueix’s legendary Château Petrus, led to Melka working for the Moueix-owned Dominus in California in 1991.

This was his first time in the U.S., and he knew about ten words in English, but he managed. After work was complete at Dominus, he did a stint at Ridge with Paul Draper. When Draper was away on weekends, his home (and hot tub) were available to Philippe, who hit it off with a gorgeous lab technician, Cherie. Philippe spoke very little English, but Cherie spoke plenty of French—et voila. Between Dominus and returning to work for Moueix in France, there were jobs at Badio O Coltibuono in Chianti in Tuscany, Italy, and Chittering Estate in Australia. But when he’d returned to work for Moueix’s Château Prieuré Lichine in Bordeaux, it was on yet another work break that he’d had enough of the French work ethic—which mostly centered around breaks. He proposed marriage to Cherie; she accepted. “We had nothing else to do!” she recalled, and they returned to the U.S. and sent out resumes. He was hired at Clos du Val, and she landed work at Beaulieu Vineyards in the lab.

A goat at Jumping Goat Vineyard.

1995 was a watershed moment in their timeline. It’s the year when Philippe and Cherie formed Melka Consulting and began offering their winemaking services. Their first clients were Lail Vineyards, Seavey Vineyard, and Constant Diamond Mountain. A year later, in 1996, the couple decided to make their own wines and introduced the Melka Wines label.

Fast-forward to the here and now, and any mention of the Melka name is often preceded by some iteration of “100-point winemaker,” but the details of Philippe Melka’s meteoric rise in winemaking fame should not be relegated to the pages of a handful of critics’ notebooks. His 100-point scores do seem to trail him like a Grateful Dead fan club, and at this stage, he couldn’t tell you how many perfect scores he’s achieved.

The first 100-pointer came in 2009 for a 2007 Dana Estates Lotus Vineyard Cabernet. But points aside, next to Napa’s other historical French figures like André Tchelistcheff of Beaulieu Vineyards fame, and the flying French winemaker Michel Rolland, or the Virginia-born Thomas Rivers Brown, much of the Cabernet Sauvignon style inhabiting bottles today is the result of other Napa winemakers aiming to craft their own Melka lookalikes.

It’s a style that yields to a glass-staining, unabashedly bold, rich, intoxicating, heady, and sumptuous mouth-filling red—which always, always, bends around whatever is on your plate. Most of his creations are intended for cellaring—to shed their baby fat and develop more nuanced complexities.

“‘Baby fat,’ if you wish, is what the California weather can give you,” Melka told me. It’s the kind of love-hate relationship that all French winemakers have with the California sun, which can over-ripen grapes, unlike in Bordeaux where it’s typically cool and rainy. “It’s like when you see a baby photo of a toddler, and those wrinkles and folds start to go away, and you begin to see the framework of the real kid. I think that’s the same thing for the wines.”

In its youth, upon entering toddler-hood, a Melka Cabernet reveals sinewy, ripe, dark fruit flavors and silken textures framed by ultra-fine tannins that lap about in waves of salty minerals, turned-earth, and expensive French cedar. It just gets better from there with proper aging. But how? How does he do it? Was it the soil? He’s a soli guru, so it must be the soil. Melka said he finds that the best vineyards possess a wealth of minerals and deep roots. “If the root system is very shallow, the wines tend to be much more simplistic,” he said.

But what about the barrels he ages his wine in? A secret 100-point barrel? He doesn’t think so but has zeroed in on about seven cooperages that he regularly uses.

I quickly realized that my attempts to get Philippe to reveal his winemaking secrets were stupidly futile as he searched in vain for answers to my questions; the truth is there is no trick. There’s no secret recipe. It’s the 10,000-hour rule in full effect, only it’s up to some 260,000 hours with Philippe (double that when you add in Cherie’s microbiology expertise).

Twenty-five years after launching their consulting business, Seavey Vineyards and Lail are still clients, along with roughly 30 others. Along the way, some highlights include Caldwell (1998-2005); Parallel Napa Valley (1999-present); Quintessa (1999-2002), which is also where he first met and worked with Rolland; Vineyard 29 (1999-2017); Hundred Acre (2000-2010); Bryant (2002-2006); and Dalla Valle in 2006. The consulting business, originally called Melka Consulting, is now Atelier Melka, and their clients include Alejandro Bulgheroni Estate, Nine Suns, Brand, Davis Estates, Raymond Vineyards, Tusk, and Westwood—to name just a few.

But only in the last decade have Philippe and Cherie taken steps toward owning their own property. In 2011, they bought eight acres in St. Helena, which included a vineyard that they’ve since named Montbleau, as an homage to Cherie’s side of the family (it’s her maiden name). They’ve also built their dream home and converted an old cottage into a temporary tasting space that eventually became a guest house (it burned in the Glass Fire, as did the young estate vineyard, which they will replant). They’d completed renovations and the building of the current crushpad and winery in 2017, the same year the Melka Estate wines were finally produced under their own roof.

The sun was beginning to set and I hadn’t yet tasted any of the wine in my glass. We dove in, swapping pandemic stories, and I scribbled quick notes about four Melka Estates wines. The portfolio is comprised of a handful of single-vineyard wines, blends, and varietal-specific wines under four proprietary names: Mekerra, produced from Sonoma Valley grapes; Majestqiue, which is sourced from sites around the world; and Métisse and CJ (named after their children Chloe and Jeremy), Napa Valley blends they’ve been making consistently since 1996.

At the end of the tasting, I pressed Philippe one last time. Had he picked up some winemaking trick from Chris Phelps at Dominus? Or during blending sessions with Rolland?

“I think I began to understand the concept of blending and how to be efficient when I worked with Michel,” he mused. “Someone like Michel, they are so quick to understand the personality of the wine, and seeing that really helped me out.”

But like most of Melka’s success, that was just the seed he needed to plant in his own deep, gravelly bed of curiosity, because according to Cherie, one of Philippe’s greatest assets is his ability to build a blend quickly in his mind, like a brilliant artist who sees the complete work of art on a blank canvas. “During a blending session, even though the group has moved on,” explained Cherie, “maybe even a couple of pages of blends later, Philippe is not afraid to take two steps back to build forward. That is an art.”

Home Videos The WORLD of WINE – Wine News. Cheap wine, tasting notes and cooking with wine The World of Wine – May 2021 … END_OF_DOCUMENT_TOKEN_TO_BE_REPLACED

How to visit Napa Valley on a Budget. In this video Carson and I explain a few ways to enjoy Napa on the cheap. Tip and advice about how to visit Napa … END_OF_DOCUMENT_TOKEN_TO_BE_REPLACED

Home Videos Get To Know Argentina Wine | Wine Folly If you love Malbec, Argentina is your ultimate wine region. But that’s not … END_OF_DOCUMENT_TOKEN_TO_BE_REPLACED