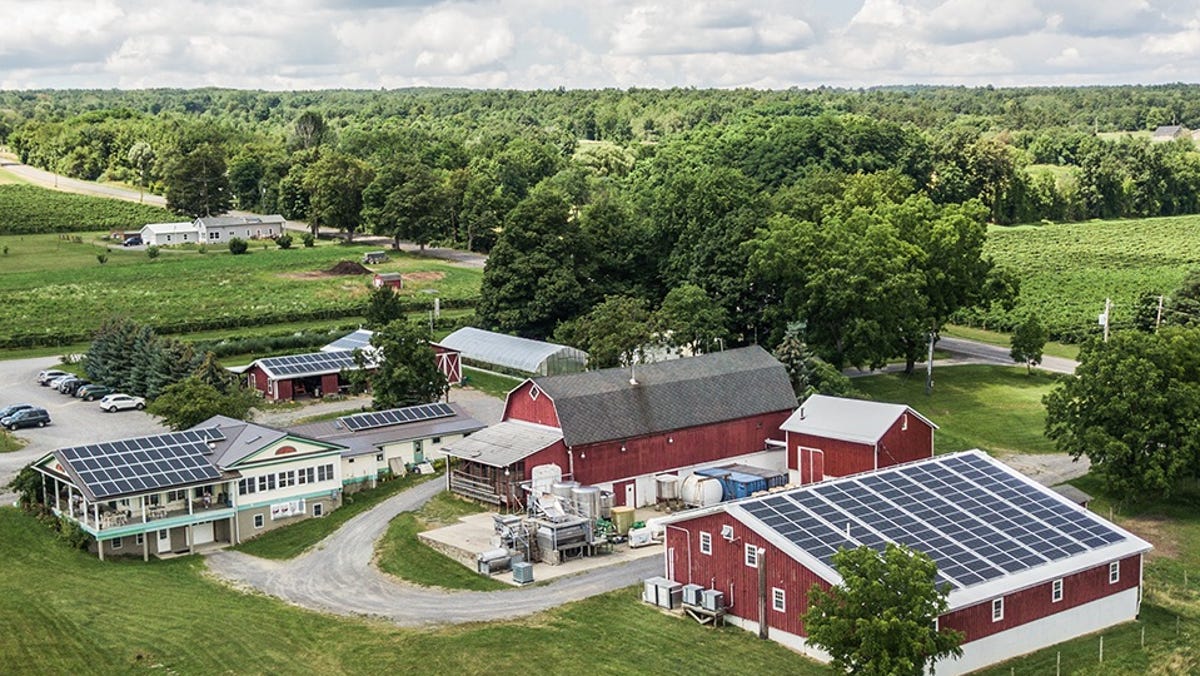 BRANCHPORT – When Art and Joyce Hunt first moved back to the family farm in the 1970s, their intent was to live close to the land and run a farm like the Hunt family had done for several generations before. But the decisions they made – and the circumstances that came their way – would eventually lead them to open Hunt Country Vineyards in 1981 and become one of the founding families of the Finger Lakes wine region that we know and love today.

So throughout this year, Hunt Country will be celebrating their 40-year story of crafting award-winning wine in one of the most beautiful places on Earth, the hills surrounding Keuka Lake.

Farming for 7 generations; crafting wine since 1981

Recipients of the 2020 Sustainability Award from the New York Wine & Grape Foundation, the Hunt family and team are committed to sustainable farming, because to make great wines you need clean air, clean water, and healthy soil. They produce a range of wines: reds, whites, rosés, sparkling and dessert. In recent years, their wines have received multiple 90-plus scores from major wine publications and praise from industry critics.

The story of Hunt Country Vineyards begins about a decade before the winery itself was established. In 1973, Art & Joyce Hunt moved back to the family farm on Keuka Lake to grow grapes, taking over from Art’s elderly uncle. They knew very little about running a farm, but they were certain they wanted to be here.

Art’s uncle was an excellent teacher, and the young couple learned how to care for 18 acres of grapes. They also learned how to plant and grow a wide variety of grains, dry beans, and hay crops. They started a garden for themselves, with both vegetables and fruit. They learned to cut down trees for wood, and to handle all of the old farm tools laying around. Art even became quite adept at restoring old buildings and old equipment.

Art and Joyce planted another 50 acres of grapes. Like numerous farmers in the area, they planned to sell their grapes to one of the biggest and well-known wine producers: the Taylor Wine Company near Hammondsport.

Growing grapes isn’t like growing other crops. They require time, money, acreage, and energy over several years before they ever produce their first harvest. Grapes are a long-term investment. Unfortunately, the Taylor Wine Company was purchased by the Coca-Cola company just a few years later – which changed the winemaker’s operations. The Hunts were suddenly told Taylor wouldn’t be buying their grapes. Farmers across the region were told the same thing, and the local grape market vanished overnight.

So Art & Joyce used the moment to learn yet another new skill: winemaking.

The first batch of wine

At first, the Hunts took part-time jobs and started selling juice to home winemakers. But they soon realized that if they really wanted to make a living, they’d need to open a farm winery and sell commercial amounts of wine. So in 1981, they got started in a small shed that used to be a wing on the old farmhouse. They put a nice foundation under it, filled it full of barrels and started making wine – seven whites and one red.

The following spring, with the help of some friends, Art and Joyce bottled up the wine. They entered the varieties in a state wine competition and won a few awards. They also turned the same little shed into a tasting room. They added a deck, a counter, a cash register, some glasses, and were open for business.

The next year, their wines included Cayuga White, a new Cornell variety. It won the award for best wine in New York state, and earned the Hunts a trip to the Governor’s Mansion. The recognition gave Art and Joyce the courage to continue going with their winery plans.

The first batch of ice wine

Hunt Country is known for being the longest, continuous producer of genuine ice wine in the United States. However, they weren’t the first. In 1981, the Taylor Wine Company produced the first ice wine in the U.S. A couple years later, when Art was walking through one of Taylor’s vineyards in late November, he happened to pick one of the frozen Vidal Blanc grapes and pop it in his mouth. It tasted like the most amazing sorbet, and Art was hooked.

The Hunts then decided to field-graft an acre of their own with the same kind of grapes. Vidal Blanc is a French hybrid variety that’s bred to withstand the cold of winter and ripen with a high amount of sugar even in cooler climates – grape characteristics that are essential to crafting a great ice wine.

In 1987, the Hunts had their first full crop of Vidal. They left all it on the vine so they could make their very first batch of ice wine. Genuine ice wine – or “Eiswein” as it’s known in Germany – is made by allowing the grapes to freeze in the vineyards deep into the winter. Then early one morning – before the temperature rises above 15° F in the vineyards – the grapes are harvested by hand. The fruit is then pressed for many hours to get a small quantity of intensely flavored juice which concentrates sweetness, flavors, and acidity.

There are, of course, many risks involved with making ice wine like this. The grapes have to hold up to rugged winter conditions. Deer, birds, and other wildlife can eat the fruit before it’s harvested. And the winter may not get cold enough for long enough to freeze the fruit – a possibility that’s becoming more and more likely with climate change.

However, when everything goes right, the resulting wine is deep gold in color and filled with flavors of rich honey, sweet apricot, and exotic fruit unlike anything you might have tasted before. That’s why the Hunts have been so committed to crafting ice wine for all these years.

After 40 years, the Hunts are still growing some of the very same grapes and making some of the very same wines as when they started. But much has changed as well. To stay informed about how they’re celebrating their origins and the continued evolution of Hunt Country Vineyards all throughout this year, visit shorturl.at/ady59 – sign up for their weekly newsletter and follow them on Facebook and Instagram.

Home Videos The WORLD of WINE – Wine News. Cheap wine, tasting notes and cooking with wine The World of Wine – May 2021 … END_OF_DOCUMENT_TOKEN_TO_BE_REPLACED

How to visit Napa Valley on a Budget. In this video Carson and I explain a few ways to enjoy Napa on the cheap. Tip and advice about how to visit Napa … END_OF_DOCUMENT_TOKEN_TO_BE_REPLACED

Home Videos Get To Know Argentina Wine | Wine Folly If you love Malbec, Argentina is your ultimate wine region. But that’s not … END_OF_DOCUMENT_TOKEN_TO_BE_REPLACED