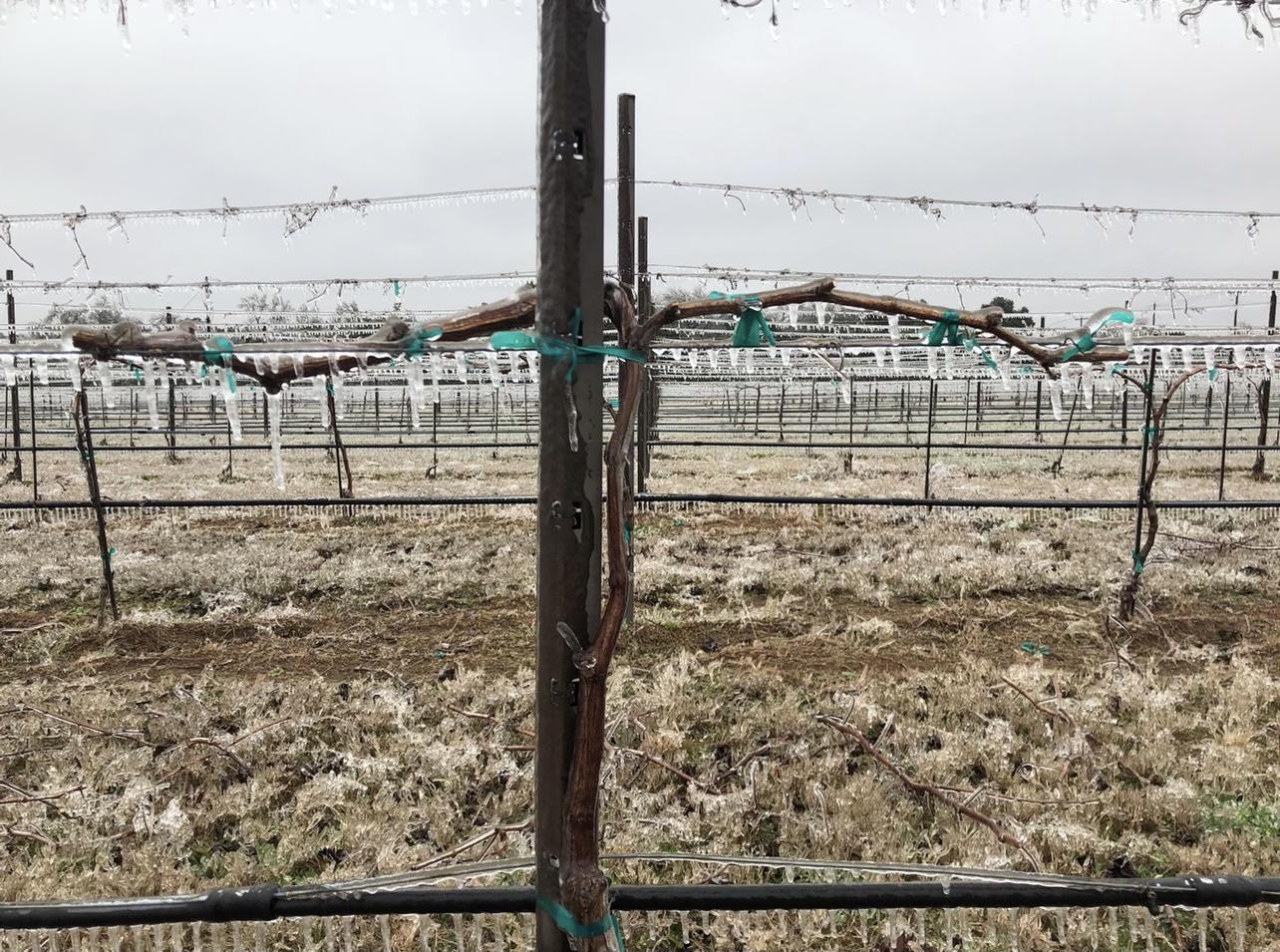 Texas winegrowers had the worst of both worlds when temperatures plunged nightly into single digits for a week — and even briefly below zero in certain locales — because they were dealing with the same logistical issues as the rest of us, ranging from extended power outages to fractured water lines in their homes and offices.

All happening, of course, on top of the myriad problems wrought by the COVID-19 pandemic.

But, for grape growers from the High Plains to the Texas Hill Country and points in between, there were also the precious vines, the very lifeblood of their livelihoods, to consider because every plant varietal has its breaking point, when cold becomes too cold.

“Hey, man, right now I’m betting on the come; it’s all I can do,” said Alphonse Dotson, the 77-year-old Houston native and former professional football player who, with his wife Martha, owns Certenberg Vineyards in Voca, about five hours northwest of Houston. Over his two-plus decades as a vintner, he has spent many a fitful night worrying about plunging mercury and/or falling hail stones.

“My mother was always worried that I’d grow up to be a gambler. When I told her I’d decided to go look for land to grow grapes, she said, “’Oh, Alphonse, now you’re the biggest gambler of them all.”

Or as Bobby Cox, one of the High Plains’ most seasoned and respected grape growers, said even before last week’s polar vortex hammered his neighborhood, “We don’t have to go to Vegas to roll the dice. We do that every year in the High Plains.”

It’s not yet a given that last week’s historic deep freeze will prove to be another in what must sometimes feel like an endless succession of gut punches to the state’s wine industry. In fact, this latest big freeze could turn out to have been a blessing in disguise, at least down in the Hill Country. But there’s no way to know for sure either way with the snow and ice having only just melted. Some tense times are ahead for growers in every Texas AVA.

“The sap was just starting to move when this hit,” said Ron Yates, who oversees his family’s winery in Spicewood and another under his own name on U.S. 290 in Hye. “I’m hoping the vines were still in a state of dormancy. In two or three weeks we’ll see new growth … or we won’t.”

Yates admitted he was almost relieved to have recently “pulled out” 10 acres of Spicewood’s vines that had been decimated by Pierce’s Disease because he’ll at least be starting from scratch with the new plantings.

Neil Newsom, whose vineyards around Plains are among some of Texas’ most iconic, admitted Saturday, “I haven’t looked around out there yet — deliberately — because it takes a few days” for telltale signs of potential disaster, such as split trunks, to emerge.

Cox is also holding off, although for a different reason. He’s in Fort Worth, where he grew up, taking care of family matters after his 99-year-old father passed away earlier this month.

“It’s been a rough two weeks,” he said, “and I’m assuming there’s going to be substantive (vineyard) damage.”

A vine that has been negatively impacted by an external source is not going to have the same resistance to cold temperatures as a fully healthy one.

“A lot of the damage had been done before the freeze,” he explained, blaming the herbicide Dicamba that’s almost ubiquitously used by his cotton-farming neighbors. Cox is part of a class-action lawsuit against the Bayer Corporation, which manufactures the product that drifts even with a light breeze and sickens vines, making them much more vulnerable to extremes of temperature.

While healthy plants, particularly native varietals and hybrids, seem to be able to handle up to -7 degrees Fahrenheit, all bets are off with weakened Vitis Vinifera vines whose fruit accounts for almost all fine wines.

Nonetheless, Cox insisted, “I’m still convinced the Texas High Plains can grow the best wines at the best price points in the world” because of the inherent quality of the terroir and how dirt cheap the dirt itself remains, certainly compared to AVAs like Napa and Sonoma and Europe’s famous wine regions. “There’s no physical reason we can’t if we just get some help.”

Eric Sigmund moved to the High Plains from Maryland only two years ago to become the chief operating officer for Vijay Reddy’s Reddy Vineyards, another one of region’s reference-standard growers. Although Sigmund lacks the long-term perspective of well-established vintners like Newsom or a Cox, he was around for what will forever remember as the “Halloween Massacre” of 2019, when an unusually frigid fall cold front blindsided them.

By comparison, he suggested, that scenario was much worse “because nothing had gone dormant. The plants were still green. Right now we’re cautiously optimistic even though there’s a lot of information that needs to be accessed and that process hasn’t even begun. Despite the worrisome things, there also some things to give us hope.”

Temperatures didn’t drop below zero as had been forecast and “there was snow, wind and pretty high humidity the week before, which we think will soften the impact. The ice accumulations on the vines a few days before should have acted as an insulator.”

Cox said last week’s polar vortex reminded him of “the winter of 1982-83, when we had 269 consecutive hours below freezing in Lubbock” However, that icy patch led to his Pheasant Ridge Winery “making some fantastic wines for two to three years afterwards. I still have no idea why it happened … The 54 inches of snow we got probably had a lot to do with it.”

“Because plant growth regulators occur inside each bud, we expect a result of this cold snap is actually a blessing for our vines resulting in an even bud-break,” Cuadra wrote in an online post. “That means we anticipate all buds emerging uniformly at the same time. An even beginning leads to even growth and even ripening of the grapes.

“Another positive effect that may result — according to a brother of mine that lived where negative Fahrenheit temperatures are the norm during the winter — is that the soils that have been frozen deeper than usual, become fluffier, lighter, easy to till, and better oxygenated. These changes to the soil occur after a deep freeze, due to the expanding ice that then leaves new empty spaces as it thaws. This is music to the ears of the vine’s root system.

“While it is way too soon to tell what the complete impact of this storm will be on our 2021 harvest, we believe our vineyards are off to a good start.”

When Dotson was reached by phone Saturday afternoon, he too was in a surprisingly upbeat mood despite dealing with a broken pipe or two and the looming uncertainties in his 30 acres of vines. Minutes earlier, he had sent his first post-freeze tasting room customers — New Zealanders who had recently moved to Austin from San Francisco — on their way.

“I never thought I’d think 56 degrees feels warm,” Dotson said. “We got down to nine degrees. In all my years (in Voca), it’s never been nine degrees. But today there’s bright sunshine. I see the blue sky above. And I made a sale!”

Home Videos The WORLD of WINE – Wine News. Cheap wine, tasting notes and cooking with wine The World of Wine – May 2021 … END_OF_DOCUMENT_TOKEN_TO_BE_REPLACED

How to visit Napa Valley on a Budget. In this video Carson and I explain a few ways to enjoy Napa on the cheap. Tip and advice about how to visit Napa … END_OF_DOCUMENT_TOKEN_TO_BE_REPLACED

Home Videos Get To Know Argentina Wine | Wine Folly If you love Malbec, Argentina is your ultimate wine region. But that’s not … END_OF_DOCUMENT_TOKEN_TO_BE_REPLACED