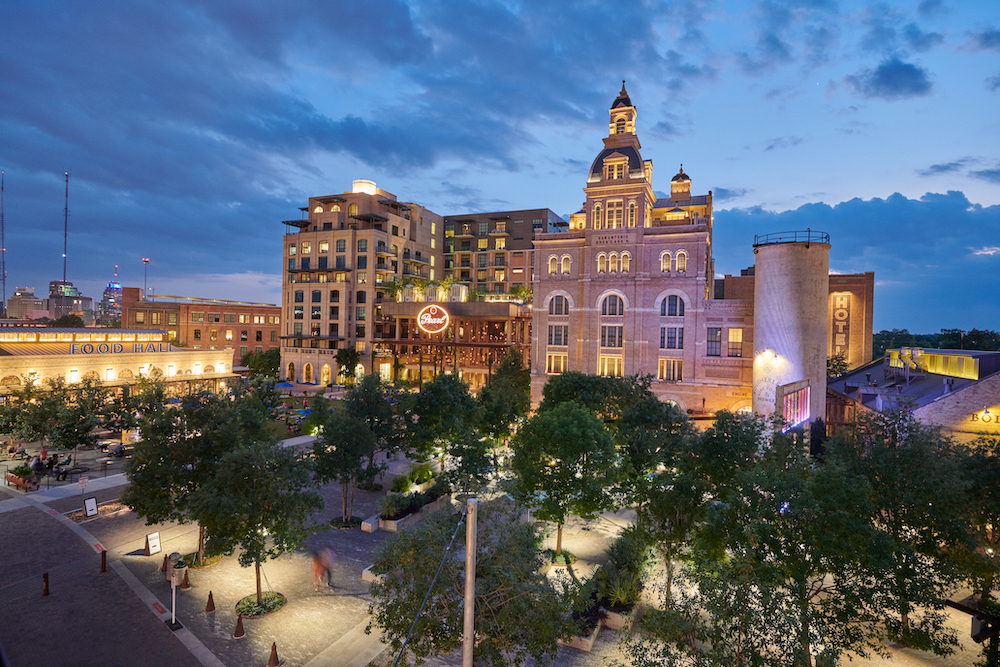 The Pearl is San Antonio’s newest historical neighborhood as well as a culinary destination that has garnered national interest. A multi-use neighborhood, it includes residential, office, retail space, and of course a lot of restaurants. I had heard about The Pearl; it seemed the name was on everyone’s lips, and I was curious to see it for myself. I already loved San Antonio — I had no doubt that I’d have a great experience visiting The Pearl.

Note: I was hosted at the Hotel Emma. All opinions are my own.

A Brief History Of The Pearl

In 1883, the San Antonio Brewing Company opened in the location that is today The Pearl District, north of downtown San Antonio. The name changed to The Pearl Brewing Company in 1952. It operated as a brewery until 2001 when it closed and was purchased by a man with a vision, Kit Goldsbury. The New York design studio Roman & Williams was hired to preserve the history and integrity of the original buildings. The result of the renovation is one of San Antonio’s most architecturally interesting and lively neighborhoods.

The Pearl District is a huge property, spread across 22 acres. It includes a range of restaurants from French to Asian, independent shops, and the San Antonio campus of the Culinary Institute of America. The Pearl has become a hot spot for visitors as well as locals to enjoy events on the plaza, dinner at one of the restaurants, or a weekend getaway at the Hotel Emma.

If August Maritzen, the architect who designed The Pearl Brewery, could see the transformation of his creation today, I think he would be more than pleased. Not that it looks drastically different than it did in 1894; that’s what is so wonderful about the former brewery headquarters, now the Hotel Emma, also referred to as “the Emma.” Designed in the elaborate Second Empire style, The Emma is widely regarded as one of the best examples of a repurposed industrial space anywhere in the world. Exposed pipes and valves are works of art — accents in the hotel’s lobby, which was once the brewery’s engine room. Warm leather sofas, colorful pillows, and exquisite floral arrangements are grouped together in a way that invites you to sit and stay a while.

Hotel Emma is named for the former owner, Emma Koehler, who took over the business after the death of her husband, Otto. Emma was an all-around positive force at the brewery, keeping employees on the payroll during Prohibition by pivoting to producing near beer, among other things.

The Hotel Emma has been named a top luxury hotel in numerous publications every year since opening in 2015. The moment you arrive, exemplary service and attention to even the most minute detail speak volumes. The Hotel Emma is truly the gem of The Pearl District.

Luxury At The Emma

I don’t know about you, but when I stay at a luxury hotel, the first thing I want to do is check out the room amenities. Hotel Emma offers some delightful surprises.

In every room are custom-made Guayabera robes, complimentary jute scuffs, and lavender bath products. A thoughtful touch was the sleep kit which included earplugs, an eye mask, and a relaxing lavender room spray.

While I was tempted to spend the evening soaking in the claw foot bathtub, the Hotel Emma is known for her culinary offerings, and there was much to explore beyond my room!

The hotel bar, Sternewirth, serves wine, craft beer, custom cocktails, and small plates. Definitely go to see the old brew tanks that have been repurposed as intimate seating that has a slightly Moroccan vibe.

Be sure to try the namesake cocktail, The Three Emmas. It’s a refreshing concoction of gin, Italian amaro, and a touch of absinthe. The name refers to three women in the life of Otto Koehler, all named Emma. The first Emma was his wife; the second a nurse hired to look after his wife following a car accident. The second Emma also became his mistress. The third Emma was another caretaker — for both his wife and his mistress. The second Emma ultimately left Otto and married. The third, well, the third Emma killed Otto in 1914. There are some loose ends to this story, but the moral is never drink more than two Emmas! 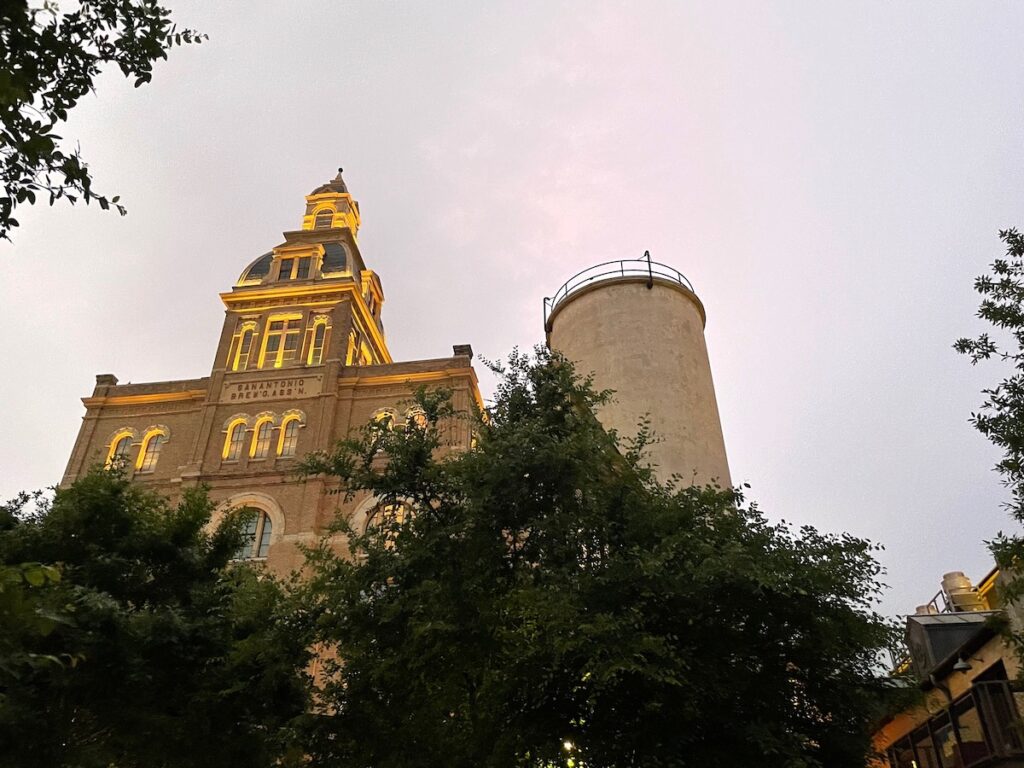 Food And Drink In The Pearl

As San Antonio’s latest and greatest culinary destination, The Pearl has something for everyone’s tastebuds. Casual eateries in the Food Hall include everything from fried chicken to Asian. On the plaza, there’s Bakery Lorraine, a French patisserie, where you can get breakfast, lunch, and dinner. The Pearl’s High Street Wine Co. is run by one of Texas’s top sommeliers, Scott Ota. The wine menu includes small-production wineries from around the world.

One can not visit a neighborhood that is a reclaimed brewery district without trying the beer brewed on-site at Southerlie Fine Food and Brewery.

Supper at the Hotel Emma is an American bistro with an open kitchen, bar seating, and a wonderful patio with a view of the San Antonio Riverwalk. For the first course, I had the coconut and cauliflower soup with turmeric — creamy, light, and delicious.

My main dish was the whole grilled branzino, though it was a tough choice as there was also lemon and dill risotto with sweet peas and parmesan. They graciously brought me a taste of the risotto.

Chicken, Texas quail, and grilled sirloin strips steak were also on the menu. Chef John Brands’s inspiration is coming together for good food at your favorite place. Supper is open for breakfast, lunch, and dinner. Reservations are recommended. If the weather is nice, I suggest a seat outside with a view of the San Antonio River.

Brasserie Mon Chou Chou is the newest restaurant to grace The Pearl. It looks like a classic French brasserie, and the menu does include some classic dishes such as mussels in white wine and salade lyonnaise. In fact, most of the dishes are fairly simple expressions of French cuisine, which is no accident, as the three owners have taken some inspiration from the home-cooked meals of their youth around various regions of France. Sit outside, be sure to have the crusty baguette, and imagine you’re whiling away some time in a brasserie in Paris. 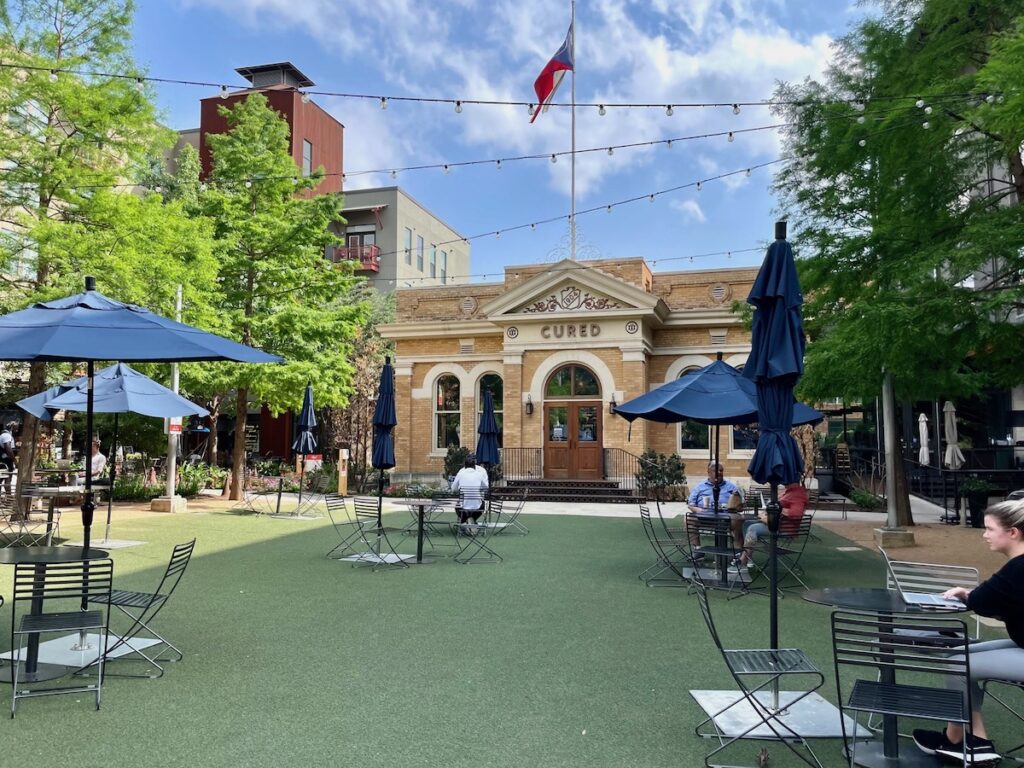 Other popular dining spots at The Pearl include Cured, housed in what was the brewery’s administration building. This is a spot for charcuterie and all things meat. However, there are options like beer can mussels and barbeque shrimp and grits. There’s also La Gloria for Mexican street food and Best Quality Daughter, which you really have to see, as it’s as much a visual design feast as it is a delicious Asian-inspired restaurant.

As a shopping destination, The Pearl District is home to an eclectic collection of one-of-a-kind shops. Discover handmade goods that support international artists, the ultimate home decor to inspire your living space, women’s casual apparel, or the perfect gift for the man in your life.

I enjoyed browsing all of the shops in The Pearl District. Who doesn’t love a shopping district that’s walkable and has a bookstore, wine bar, and French patisserie? Oui, oui! Whether it’s time for coffee or something stronger, you can make a leisurely day of it.

For men’s clothing and gifts, The Sporting District will win you over with its thoughtfully curated selection. The concept is American-made clothing and items from designers throughout the Southern United States. The owner designed the shop to convey comfort, ease, and something desirable all at once. Find gift items like hammered copper shot glasses, quirky items like feather bow ties, and a selection of men’s wardrobe items.

Ten Thousand Villages is a chain of stores specializing in supporting artisans from around the world and a pioneer in the realm of fair trade practices. This is a place where you can shop and feel really good about the dollars you spend. Fair Trade practices help fight poverty through commerce and long-term relationships with communities and artists. There’s a great selection of jewelry, small accessories, and useful items like dinnerware and serving pieces.

Adelante is a third-generation women’s clothing and accessory shop. The looks are casual but chic and somewhat bohemian. I liked the colorful Mexican-influenced dresses and tops. If you’re looking for a Texas or San Antonio-themed gift, this is the place!

The Twig is the place to pick up a current release or a Texas history and culture book. Bring a blanket, buy a book, then find a spot on the lawn. This is the beauty of a multi-use district like The Pearl. Of course, there are plenty of chairs and even some shady spots for those sunny Texas days.

The Pearl is a place to experience. To delight all of your senses. Stay. Play. Eat. It’s one of the most popular destinations in San Antonio and receives visitors from all over the world. It would be wise to make your reservations in advance. Pro tip: Go hungry.

The vegan revolution marches on — one step forward and two steps back, as Lenin would say.Celebrity chef Spike Mendelsohn is opening PLNT Burger in … END_OF_DOCUMENT_TOKEN_TO_BE_REPLACED

New ex-cellar stocks of Château Latour 2005 have joined the wave of September fine wine releases via the Place de Bordeaux. Latour 2005 is regarded as … END_OF_DOCUMENT_TOKEN_TO_BE_REPLACED

New aperitif for Indian food​ An aperitif made specifically to complement Indian cuisine has been created for the restaurant sector. Designed by … END_OF_DOCUMENT_TOKEN_TO_BE_REPLACED