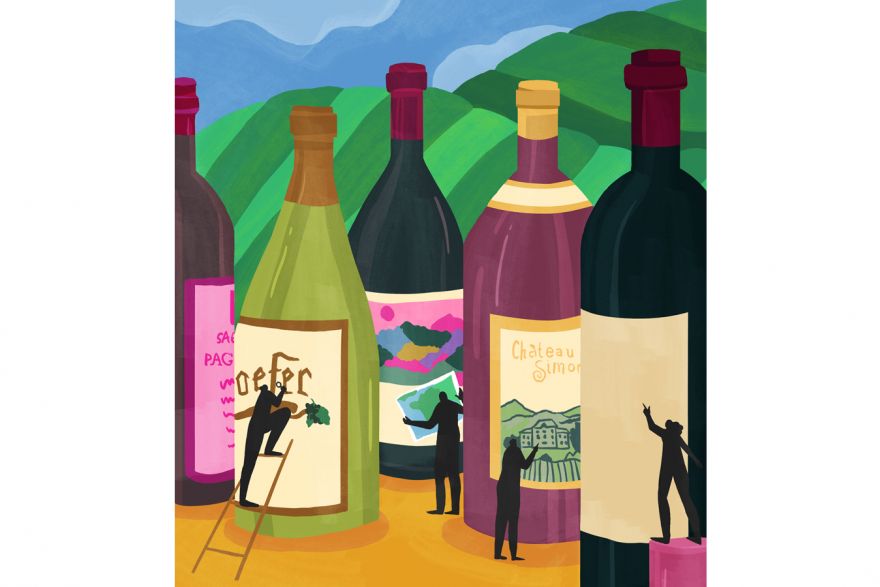 BUYING wine can be a paralysing challenge. Facing a wall of unfamiliar bottles can frustrate even the most worldly consumer.

Those bottles have labels, of course, often with loads of information about the character and nature of the wine within. But the more detail they offer to knowledgeable wine consumers, the more baffling they seem to the uninitiated.

To cut through the confusion, some wineries simply furnish fewer facts. These wines – often hugely popular ones like Yellow Tail, Barefoot and 19 Crimes – rely on brand names and marketing to build an audience.

For dedicated wine lovers, though, the facts are crucial, even if it takes some education to decode a label.

What follows is a key to interpreting some common types of wine labels, and some of the most confusing ones.

This is a classic label for a Burgundy, one of the most esteemed French wine regions and also one of the most complicated. It comes complete with a simplified provincial coat of arms, vines laden with grapes and an old Gothic font used for the region, Chambolle-Musigny.

1. Ghislaine Barthod: The producer of the wine. A more old-fashioned label might have rendered the name in fine print. The increased emphasis here is a nod to the commercial importance of the producer today.

2. Chambolle-Musigny: The region in which the grapes were grown, which in classic French style is displayed most prominently.

3. Premier Cru Les Gruenchers: In the Burgundian hierarchy, vineyards are rated on their potential to make distinctive wines. At the top are the grand crus, vineyards so distinctive as to warrant their own appellation. Just underneath are the premier crus, prestigious in their own right but always listed with the region in which they reside. This indicates that the grapes came from Les Gruenchers, a premier cru vineyard within the Chambolle-Musigny region.

6. Propriétaire-Récoltante: Indicates that Barthod is both the proprietor of the estate and the grape grower, or récoltante.

Here is another traditional French label, from the small appellation of Palette, in Provence. It, too, has a coat of arms and depictions of grapes. But Palette is a simpler region than Burgundy, with only a handful of producers and without the hierarchy of vineyards and other distinctions, so the label needn’t offer as much information.

1. Château Simone: The name of the producer, in a kind of precursor to an art nouveau font, is superimposed over a rendering of the chateau and its vineyards.

2. Palette – Appellation Palette Contrôlée: The official notice of the appellation, is given pride of place at the top of the label.

3. Mis en Bouteille au Château: This goes one better than a simple “mis en bouteille” by specifying where the wine was bottled, at the place the wine was made.

4. Rougier, Propriétaire, Meyreuil (B. du R.) France: Propriétaire denotes the owner of the winery. Rougier is the surname of the family that owns Château Simone; Meyreuil is the commune in Provence where it is situated.

Alsace does things a little differently than the rest of France. For many years France and Germany fought to rule this region and, as in German-speaking wine cultures, the label lists the grape variety, riesling. Alsace has also identified vineyards with the potential to make exceptional wines, which it designates grand crus. Beyond the legal requirements, individual estates may decorate the label and add discretionary information.

2. Alsace Grand Cru Rangen: The region, Alsace, and the vineyard, Rangen, which has been designated a grand cru. Just underneath is a year, 1296, and a crest with grapes and the initials I H, taken from a carved stone found years ago in a vineyard by the Humbrecht family. The winemakers attribute the crest to an ancestor, Isadore Humbrecht.

3. Clos Saint Urbain: A “clos” is an enclosed vineyard. This clos is named for a 16th-century chapel devoted to Saint Urbain that sits within the vineyard.

4. Rangen de Thann: The Rangen vineyard, the southern most grand cru in Alsace, stretches between two villages, Thann and Vieux Thann. The Clos Saint Urbain portion is in Thann, which the Humbrecht family believes is the most interesting part of the vineyard, hence Rangen de Thann.

5. Appellation Alsace Grand Cru Contrôlée: The official designation that the wine meets the requirements of the appellation.

6. Riesling: The wine is made entirely of this white grape.

7. Indice: This is a proprietary code used by Zind Humbrecht to indicate the wine’s level of sweetness, with Indice 1 the driest and Indice 5 the richest and sweetest. It will be filled in depending on the vintage.

This typifies an old-fashioned German wine label, full of essential information that novices will find mystifying, perhaps mitigated by the image of a kindly monk raising a glass. It is adorned by the conventional old motifs of a coat of arms, on the barrel, and grape bunches.

1. Willi Schaefer: The name of the estate, in a German Gothic font. Its address is just underneath.

2. Mosel: The region in which the wine is made, the Mosel Valley in western Germany.

3. Graacher Domprobst: Domprobst is the name of the vineyard, situated in the village of Graach.

4. Riesling Auslese: Riesling is the grape; auslese indicates that the grapes were ultraripe when harvested, and usually suggests a very sweet wine, unless you see the phrase “auslese trocken”, a rare designation for a dry wine made from ultraripe grapes.

5. Prädikatswein: The Prädikat system, often used in Germany and occasionally in Austria, evaluates grapes according to six ripeness levels when harvested, including auslese. These designations are generally used for sweet wines, but, depending on the region, may also be used for dry. A dry wine may be labelled Prädikatswein without the ripeness designation.

7. Gutsabfüllung: A German term noting that the wine was bottled on the grounds of the winery.

8. VDP Grosse Lage: VDP is a German association of leading growers. It awards the term “grosse lage” to the best vineyard sites. Not to be confused with the maddeningly similar “grosselage,” which simply indicates a collection of mediocre vineyards with supposedly similar characteristics.

As with French wine, Italian labelling tends to emphasise place rather than grapes. So you will have to look somewhere other than this label to learn that this wine is 95% sangiovese and 5% canaiolo. Vineyards and crests are popular with Italian label designers, too. The clean lines make this label easy to read.

1. Monteraponi: The name of the estate.

Unlike the busy Mosel label of Willi Schaefer, this one has been streamlined, offering only some basic information: the vineyard site, Steffensberg, in the Mosel region, the vintage and the name of the producer, Weiser-Kunstler.

1. Weiser-Künstler: The name of the estate. Note that the ITC Willow typeface doesn’t permit an umlaut, which represents a “ue” sound, so an “e” has been inserted into the “u” of Künstler.

2. Mosel: The wine comes from the Mosel region.

3. Steffensberg: The name of the vineyard. NYTIMES

Home Videos The WORLD of WINE – Wine News. Cheap wine, tasting notes and cooking with wine The World of Wine – May 2021 … END_OF_DOCUMENT_TOKEN_TO_BE_REPLACED

How to visit Napa Valley on a Budget. In this video Carson and I explain a few ways to enjoy Napa on the cheap. Tip and advice about how to visit Napa … END_OF_DOCUMENT_TOKEN_TO_BE_REPLACED

Home Videos Get To Know Argentina Wine | Wine Folly If you love Malbec, Argentina is your ultimate wine region. But that’s not … END_OF_DOCUMENT_TOKEN_TO_BE_REPLACED