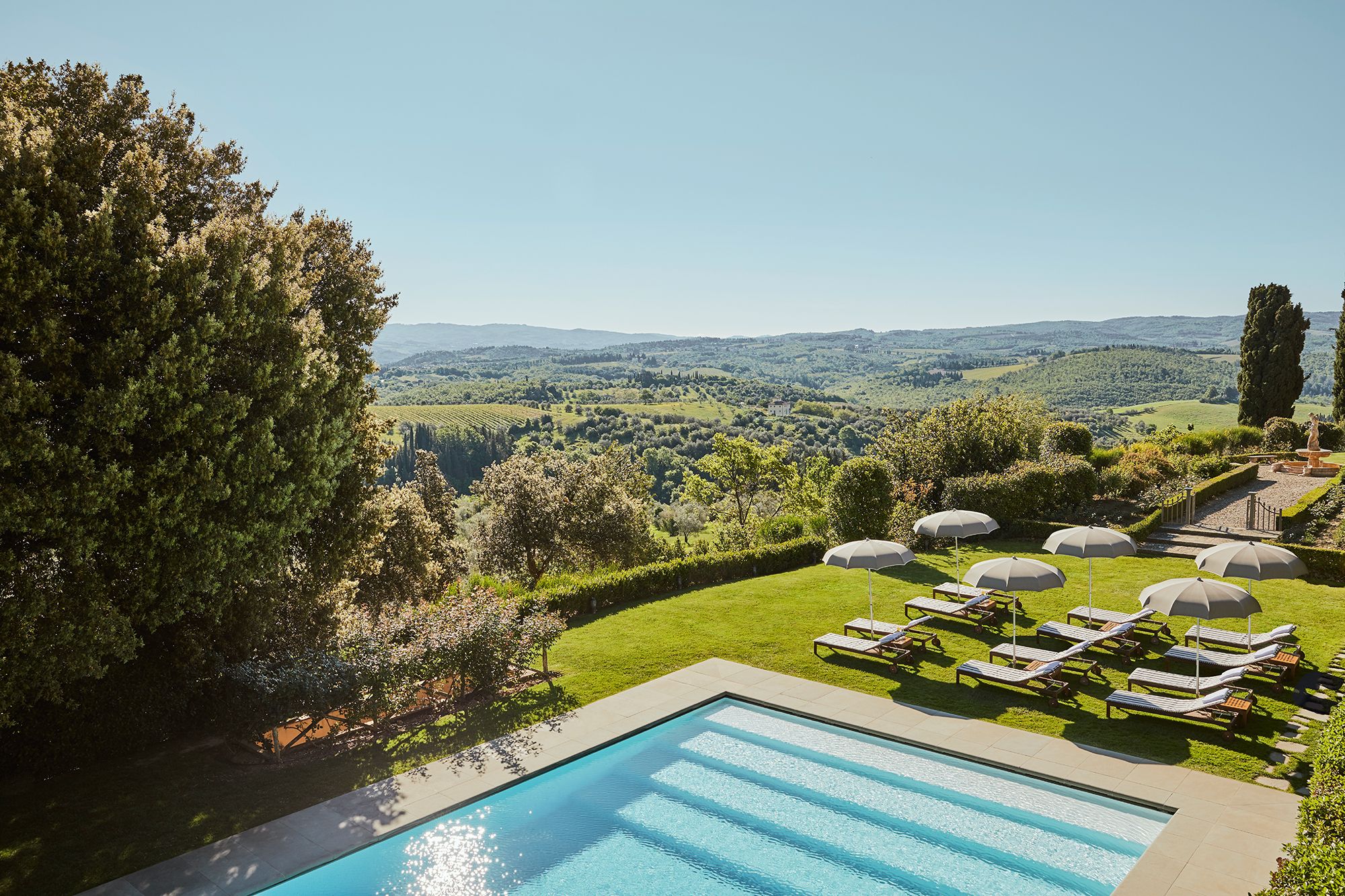 Two charming hotels offer varying perspectives on the alluring Italian region of Tuscany, but with one thing in common—a culinary experience like no other

There are places to which one yearns to return even after a single visit—or sometimes even when you’re still there. For Christina Ong, the founder of Como Hotels & Resorts, the historic Castello Del Nero must have left such an indelible impression (she stayed at the elegant Terrace Suite a few years back) that when the opportunity of acquiring it came about, she decided to make it part of her growing hospitality empire as the group’s first hotel in continental Europe.

It’s easy to understand why once you see the 12th-century castle with your own eyes. Weaving through the charming small town of Tavarnelle Val di Pesa, you’re greeted by a stately entrance and symmetrical Italianate gardens that have been carefully tended to throughout the generations. The structured greenery frames the majestic architecture of both the towering castle and a church, a place that comes with nine centuries of rich Tuscan history.

Castello Del Nero was first built by the prominent Del Nero family (hence the name) and was passed on to another local family, the Torrigianis, in 1825. The structure and the grounds retain an aristocratic air, and its significance requires that restoration works be accredited by the Italian Ministry of Cultural Heritage and Activities. In this incarnation, Como commissioned acclaimed Italian designer Paola Navone to reimagine the space, and she channelled her pared-back aesthetic in clever ways. The terracotta floors, original frescos and wooden touches remain, but she injected a fresh palette—whites, greys, light blues and muted greens dominate—resulting in a more contemporary appeal. While the world has been on hold with the pandemic, the property is set to reopen in March 2021 with a redesigned Como Shambala retreat also by Navone.

At first glance, one doesn’t immediately see the expanse of the hotel’s 740-acres estate, but once inside, the architecture intently capitalises on the view. The terraces, restaurants and glistening pool all overlook the extensive estate, but apart from having a beautiful view, they also shape the direction of all the dining venues. Its “estate to table” philosophy guides the culinary programme here, be it a casual summer salad at the Pavilion or an indulgent tasting meal at La Torre, a Michelin-starred restaurant by executive chef Giovanni Luca Di Pirro.

There’s plenty of relaxed seating to take in the rolling green hills and vineyards. There’s also yoga, meditation and more, which shouldn’t come as a surprise, as wellness is a central tenet of the Como brand. While the spa has always been a draw of this property long before it was taken over by Como, it will even be more so, being positioned as the first Como Shambhala retreat in Europe. With eating well and being well on the agenda, leaving will be the only difficult thing.

TATLER TIP: Located a short drive from Siena and Florence, the hotel is well-placed to discover these beautiful Renaissance cities.

Walking the sun-dappled paths through this 12th-century hamlet, taking in the sway of the apricot trees and discovering the incredible artworks dispersed throughout the historic property is an experience that’s only seconded by the discovery of the precious wines of this tiny powerhouse of a producer. Welcome to Castello di Ama, one of Tuscany’s most acclaimed winery-hotels. Best known for its luxurious approach to hospitality that combines the twin passions of second-generation owner Lorenza Sebasti, the property is as synonymous with forward-thinking art as much as it is respected for its quality Italian wines. As the second-generation owner of the winery, Sebasti runs a tight ship that isn’t without lashings of that inimitable Italian sprezzatura; on the drive into the property, you’re met with the tumbling bucolic vista that is the Chianti Classico region, resplendent with rich, lush vineyards whose vibrant emeralds vie for prominence among the endless blue skies.

Described as “a microcosm of wine, art and hospitality”, Castello di Ama plays its part flawlessly by immersing guests into a world of stories. Much of the magic comes from the historic set itself, where you might discover contemporary Japanese art in a meditative chapel or sample a glass of Chianti Classico on the terrace surrounded by distant birdsong. Sebasti has ensured that all of the art on the property has carved out its own home for life, rather than being supplanted temporarily into its surroundings. From the Bella Vista suite, located on the first floor of the Villa Ricucci building, you’ll be able to see the majestic mirrored wall by French conceptual artist Daniel Buren reflecting the beauty of the San Lorenzo vineyards from your double-arched window; deep underground, within the ageing chambers, the harsh red neon of Revolution/Love by South African artist Kendell Geers casts a powerful glow over the barrels of wine. While you could meander the grounds and allow serendipity to take over in the discovery of these immersive art pieces, the property also arranges tours and tastings for guests to savour the fuller context of the initiative.

Every guest is welcomed as though they are familia, and nowhere is that recognisable Italian hospitality more apparent than over a meal at Il Ristoro, which serves the rustic flavours of the region through a contemporary filter. It is here that you must try the iconic panzanella, the beloved Tuscan chopped salad that somehow transforms stale bread, ripe tomatoes and onions into an explosion of tantalising flavour and texture, best paired with a glass from the Castello di Ama vineyards—we recommend the 2011 Haiku, a truly poetic blend of 50 per cent sangiovese, 25 per cent cabernet franc and 25 per cent merlot.

TATLER TIP: Apart from making excellent wines, Castello di Ama also produces its own premium extra-virgin olive oil, using hand-picked olives that are pressed the same day at its on-site mills. Made in extremely small quantities, it’s a priceless souvenir that captures some of the flavour of Tuscany.

Home Videos The WORLD of WINE – Wine News. Cheap wine, tasting notes and cooking with wine The World of Wine – May 2021 … END_OF_DOCUMENT_TOKEN_TO_BE_REPLACED

How to visit Napa Valley on a Budget. In this video Carson and I explain a few ways to enjoy Napa on the cheap. Tip and advice about how to visit Napa … END_OF_DOCUMENT_TOKEN_TO_BE_REPLACED

Home Videos Get To Know Argentina Wine | Wine Folly If you love Malbec, Argentina is your ultimate wine region. But that’s not … END_OF_DOCUMENT_TOKEN_TO_BE_REPLACED