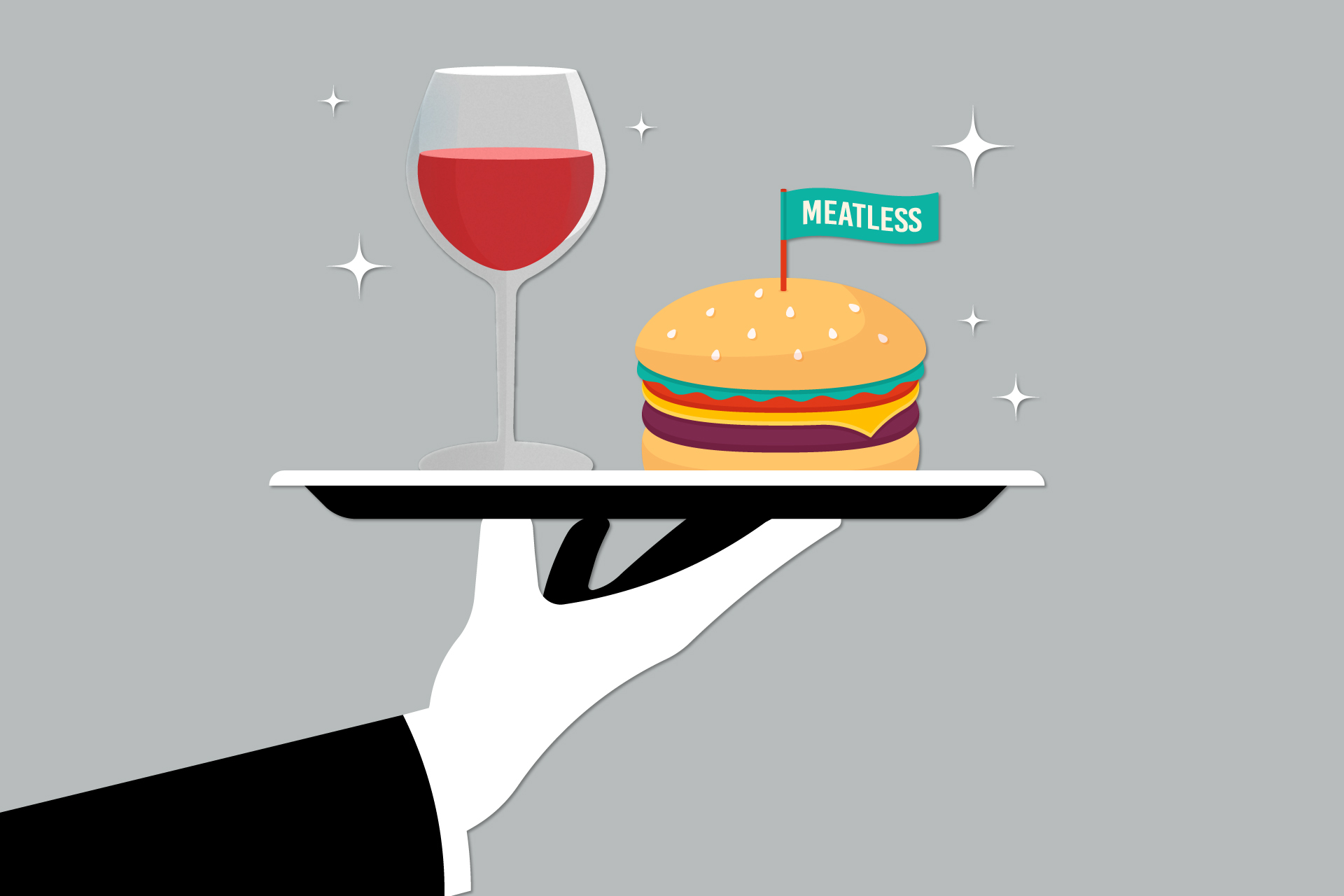 Plant-based proteins have long been a dietary staple in China and Japan, and they’re gaining traction among many U.S. consumers, too. You won’t only find vegan meats in the frozen aisle of health food stores, either. They’re on menus at national chains from Denny’s to Burger King.

According to Nielsen data, from March to May 2020, sales of plant-based meats surged 264%. The bottom line? Vegan “meats” from brands like Boca, Impossible and Beyond look to be here to stay. So, we better start figuring out how to pair them with wine.

Hristian Iliev, the head sommelier of Carbone at Aria Resort & Casino in Las Vegas, follows a vegan diet at home. He says that pairing with plant-based meats requires a bit of finesse.

“Most mock meats lack that distinct flesh smell and texture, so I would approach them with slightly more elegant wines,” he says.

That often translates to light- to medium-bodied reds with pronounced acidity and low tannin levels, or crisper whites. And don’t be afraid of some bubbles.

“I really like how juicy Barbera brings fruit to the smoky charcoal aromas of the Beyond.” —Hristian Iliev, head sommelier, Carbone

Drew Brady, who selects wines for Overthrow Hospitality’s family of eight New York City vegan restaurants, draws on nostalgia when pairing wine with an Impossible Burger, made with engineered proteins that have an uncannily beef-like taste and texture.

“For many plant-based eaters, the memories of non-plant-based meats are fresh, the juicy burgers, the greasy fingers,” says Brady. “I want to pair wines that offer a gentle nod to the past while providing a new excitement for the future.” Carmenère, he says, is a go-to choice that’s “full of nuance.”

Harding opts for Loire Valley Cabernet Franc or juicy Beaujolais alongside the Impossible. “Pair it like a burger,” he says, simply.

Barbera also pairs well with Beyond Meat, made with proteins derived from peas and mung beans, says Iliev.

“If I’m making a classic burger, I’d pair it with a great Barbera d’Asti,” he says. “I really like how juicy Barbera brings fruit to the smoky charcoal aromas of the Beyond.”

It’s generally safe to follow many of your preconceived pairing rules, like serving lighter wines with plant-based proteins that mimic white meat. But certain products benefit from more unexpected combinations.

Iliev finds that Boca Chik’n Veggie Patties, for instance, are improved by the “power and intensity” of a Grenache-based Châteauneuf-du-Pape.

“Here’s a good rule of thumb for wine pairings and all things breaded: Find the right bubbles,” says Mucerino, who suggests a brut Champagne rosé to pair with Boca’s spicy version of the patties, noting that the sparkler’s yeasty characteristics “pair wonderfully with the breading on the patty.”

Because of his years following a vegan diet, Iliev has pairing suggestions for nearly any kind of fake meat, from weeknight meals to holiday staples. Field Roast Sausages, which he says are very often in his fridge, work with a lighter red.

“We can always rely on the great classics from Burgundy,” he says. “A nice Pinot Noir from Pommard made by Domaine de Montille will bring the right amount of fruit and acid to play with the smoky and lightly spiced sausage.”

Tofurky, meanwhile, is a Thanksgiving classic, prepared with lots of dried sage, rosemary and thyme.

“I like pairing it with a great bottle of Barolo,” says Iliev. “The Nebbiolo tannins withstand the texture, while the dried red-fruit aromas play well with this dish that always reminds me of autumn.”

“Our vegan crab cakes are full of wonderful spices like pepper, mustard, nutmeg, bay leaf and paprika, which are nicely accented when paired with a light Pinot, such as a Pinot from California’s Russian River Valley,” says Miles Woodruff, CEO of Sophie’s Kitchen.

He also suggests using the plant-based shrimp in spicy “bang bang” tacos, which he likes to serve with “a fruit-forward Sauvignon Blanc from New Zealand to balance out the spice.”

Regardless of the specific vegan dish you’re pairing, it’s all about balance.

“My aim is to engage the palate’s tasting receptors and to create a bite/sip experience that comes full circle,” says Mucerino. “I pick a wine that will either complement, enhance or complete a missing flavor to create the perfect mouthfeel.”

Home Videos The WORLD of WINE – Wine News. Cheap wine, tasting notes and cooking with wine The World of Wine – May 2021 … END_OF_DOCUMENT_TOKEN_TO_BE_REPLACED

How to visit Napa Valley on a Budget. In this video Carson and I explain a few ways to enjoy Napa on the cheap. Tip and advice about how to visit Napa … END_OF_DOCUMENT_TOKEN_TO_BE_REPLACED

Home Videos Get To Know Argentina Wine | Wine Folly If you love Malbec, Argentina is your ultimate wine region. But that’s not … END_OF_DOCUMENT_TOKEN_TO_BE_REPLACED