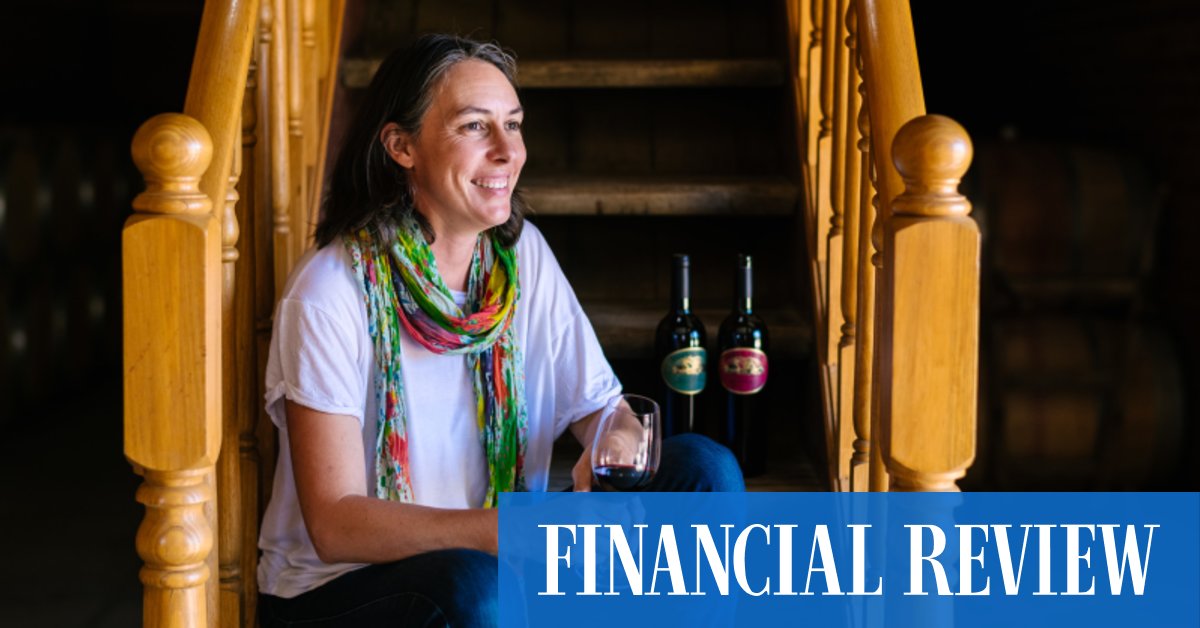 Quincunx is not a word you come across every day. So when winemaker Simon Osicka casually drops it into conversation, I have to stop him and ask what on earth he’s talking about.

“It’s a very old method of planting,” he says, as we walk towards his four-years-young but ancient-looking grenache vineyard, where each vine is tied like a small bush to a single stake. “I got the idea from a book written by [19th-century Victorian viticulturist] François de Castella. But it goes back further than that, to the Romans. The vines are planted quite far apart in a repeated quincunx pattern, which is like the five dots on a domino, so you can plough in three different directions.”

This small patch of bush vines, surrounded by a kangaroo-proof fence – complete with an impressive stone, timber and iron gateway – is emblematic of the changes taking place in this central Victorian wine region.

People here are thinking hard about the strengths and weaknesses of wine-growing in the district, and are responding by planting new grape varieties, adapting their viticulture and tweaking their production techniques. In many cases they have been inspired, like Osicka, as much by the past as by present innovations.

Simon’s grandfather, Paul Osicka, a Czech émigré vigneron, first planted shiraz and cabernet at Graytown, on the eastern edge of the region, in the 1950s. Since then, the climate has shifted, as have consumer tastes, which is why Simon is branching out with an old-fashioned bush-vine block of heat-tolerant and increasingly fashionable grenache.

The climate has already changed and my generation is asking: Are we really ready for this?

He’s not alone. In this region famous for its shiraz, a growing number of producers are making wine from southern French varieties such as marsanne, roussanne and mourvedre, and Italian grapes such as fiano, aglianico and nero d’avola. And a few have planted old-style, single-stake, densely grown vineyards: small patches of shiraz at Tellurian and Syrahmi; blocks of grenache and carignan at Heathcote II; new plantings of nebbiolo at Jasper Hill.

It’s all part of a process of questioning the past, present and future of the region, something I experienced up close when I attended the Heathcote winemaker’s annual shiraz tasting at the new Tellurian Wines cellar door late last year.

Every year, a large group of the region’s vignerons sits down and blind tastes a line-up of wines from the northern Rhone (the “home” of syrah, aka shiraz, and the source of benchmark examples of the variety), a selection from around Australia, then a couple of dozen from their own vineyards. (I’ll cover this tasting and recommend some highlights next week.)

The ensuing frank discussion and information sharing has helped each winemaker hone their techniques and take different approaches. As veteran winemaker Lindsay Ross of The Bridge Vineyard told me: “The best thing about this group and these tastings is that gets me out of my stale way of thinking.”

The same spirit of collaboration led to the establishment last year of the Heathcote Women in Wine group. Formed as a way for women from six of the region’s wineries to support each other during the first major lockdown, the group has since set up a Facebook page and cellar door trail, sold mixed wine packs and held virtual tastings.

Importantly, some women in the group – Jodi Marsh of Sanguine, India Munari of Munari Wines and Madeleine Marson of Vinea Marson – are the daughters of the winemakers and entrepreneurs who have planted vineyards and helped establish the region’s reputation over the past few decades.

This strong sense of generational change is behind many of the developments in Heathcote, particularly when it comes to thinking about a hotter, drier future. Or, indeed, present.

“The climate has already changed,” says winemaker Emily McNally from Jasper Hill. “And my generation is asking: Are we really ready for this?”

Emily’s father, Ron, has always been adamant that you should be able to grow grapes without irrigation: that the grape vine evolved over millennia to grow without supplementary water, so if you need to irrigate your vines, you must be growing them in the wrong place.

Now the Laughtons are not so sure. Because the climate is simply not the same as it was when their vineyards were established in the 1970s, the family is contemplating changing its philosophical aversion to irrigation. It’s a matter of survival.

“We’ve still got a lot of learning to do,” says another winemaker, Tobias Ansted from Tellurian. “But you’ve got to keep trying new things. You’ve got to start somewhere. When you establish a vineyard, you’ve got to think that you’re doing it for the next generation.

“If you’ve just got the next 10 years in mind, you’re doing it wrong.”

2019 Tellurian Marsanne
As well as being certified organic in 2019 and adopting various viticultural techniques to improve vine health and soil moisture retention, Tellurian has branched out into growing warm-climate-adapted varieties like this gorgeous expression of the white grape marsanne: super-attractive, complex aromas of spice and flowers, and a deliciously rich and grapey but fresh mouth feel. Current vintage is 2018; the 2019 is due for release soon. $29
tellurianwines.com.au

2019 Whistling Eagle Grenache
Ian “Bomber” Rathjen’s great-grandfather planted Heathcote’s first vineyard back in the 1860s. Bomber planted his own vines in the mid-1990s, and is now one of the region’s most adventurous growers, with varieties such as the Portuguese touriga and arinto alongside the more familiar shiraz and cabernet. His grenache is particularly good: bold, full of dark bramble fruit, generous and warm, with a distinctive rumble of sandalwood perfume and earthy tannin. Current vintage is 2018; the 2019 is due for release later this year. $35 whistlingeagle.com

2015 Vinea Marson Nebbiolo
Yes, Heathcote is famous for its shiraz, and I tasted some great examples when I visited recently (I’ll write about them next week), but some of the most outstanding wines I tried were made from the Italian grape nebbiolo, particularly those from Jasper Hill, Tar & Roses, and this one from Vinea Marson: intensely, entrancingly aromatic (classic chestnut and truffle) and tongue-huggingly tannic, but also translucent, fine and harmonious. Already six years old, but also a wine for the cellar: the 2008, also tasted on my trip, is in a sweet spot for drinking right now. $42 vineamarson.com

Home Videos The WORLD of WINE – Wine News. Cheap wine, tasting notes and cooking with wine The World of Wine – May 2021 … END_OF_DOCUMENT_TOKEN_TO_BE_REPLACED

How to visit Napa Valley on a Budget. In this video Carson and I explain a few ways to enjoy Napa on the cheap. Tip and advice about how to visit Napa … END_OF_DOCUMENT_TOKEN_TO_BE_REPLACED

Home Videos Get To Know Argentina Wine | Wine Folly If you love Malbec, Argentina is your ultimate wine region. But that’s not … END_OF_DOCUMENT_TOKEN_TO_BE_REPLACED