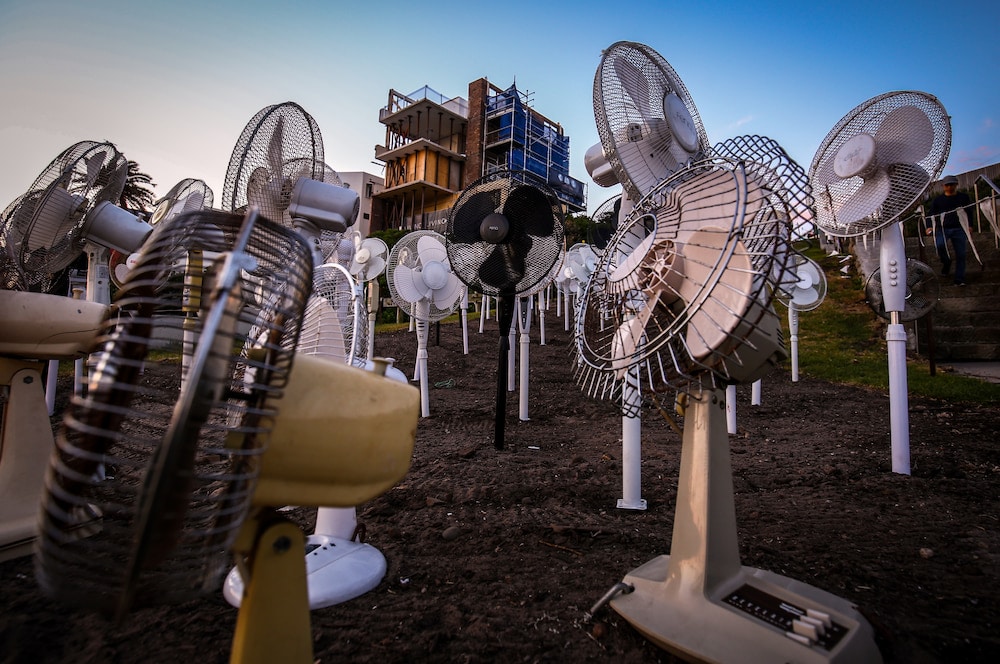 Four prominent Australian artists – Aretha Brown, Claire Martin, Kaff-eine and Jane Gillings – will gather in Canberra this Sunday, to discuss their art, activism and ideas, marking the closing weekend of Kambri’s HERE I AM festival.

Multidisciplinary artist and educator Jane Gillings’ work ranges from large-scale sculptural installations to detailed drawings, through which she explores “our effect on the world as humans, and the amount of waste and thoughtlessness that exists in the world”.

Her 2019 entry, A Choir, consisted of a sea of discarded pedestal fans which served as rusted, wonky examples of designed obsolescence.

Gillings says she has been preoccupied with two questions in the lead up to the conference this weekend.

“Activism as an artist can be quite tricky because how do you even know it works?”

“And my second question is how do we keep going?”

She says it’s during art classes with children where she witnesses her influence, when she asks students to think about their effect on the planet.

But Gillings muses it’s easier to perceive her public art practice not ‘working’.

“Unless someone tells you, you never know.”

“As humans who believe in the same thing, we’ve got to hope that the power of a lot of voices will elicit change.”

Gillings will be joined on stage by three other artists for a group discussion, each with unique stories and practices.

Gumbaynggirr woman Aretha Brown describes herself as a “painter, decolonizer, dreamboat”, and her work has shown at the National Gallery of Victoria.

Brown is determined to make Indigenous history education mainstream. In 2017 she was elected as Prime Minister of the National Indigenous Youth Parliament – the youngest person and the first woman to hold this position.

Kambri’s aMBUSH Gallery co-founder Bill Dimas says the conference is an opportunity to celebrate the efforts made by artists to bring awareness and justice to important cases affecting humanity.

“Activism stems from care and love, and is service to others,” he says.

“The women featured in the conference have done great service to others through important work that will inspire and awaken everyone’s spirit so we may become better versions of ourselves.”

The Art Activism by Great Women Conference is free for students. The general public may choose from three paid ticketing options.

The event will be organised in compliance with ANU guidelines and ACT Government COVID-19 restrictions.

Home Videos The WORLD of WINE – Wine News. Cheap wine, tasting notes and cooking with wine The World of Wine – May 2021 … END_OF_DOCUMENT_TOKEN_TO_BE_REPLACED

How to visit Napa Valley on a Budget. In this video Carson and I explain a few ways to enjoy Napa on the cheap. Tip and advice about how to visit Napa … END_OF_DOCUMENT_TOKEN_TO_BE_REPLACED

Home Videos Get To Know Argentina Wine | Wine Folly If you love Malbec, Argentina is your ultimate wine region. But that’s not … END_OF_DOCUMENT_TOKEN_TO_BE_REPLACED