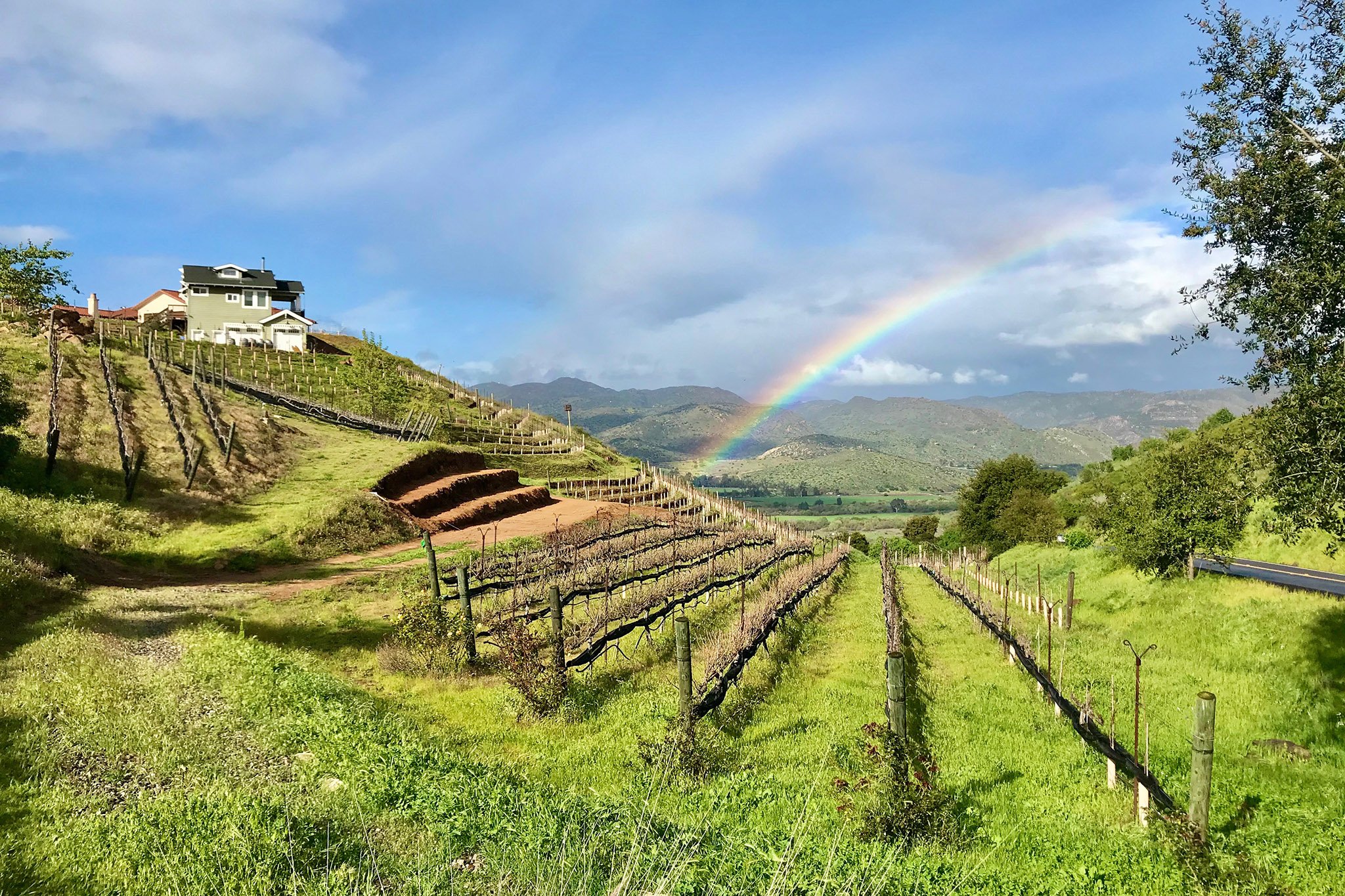 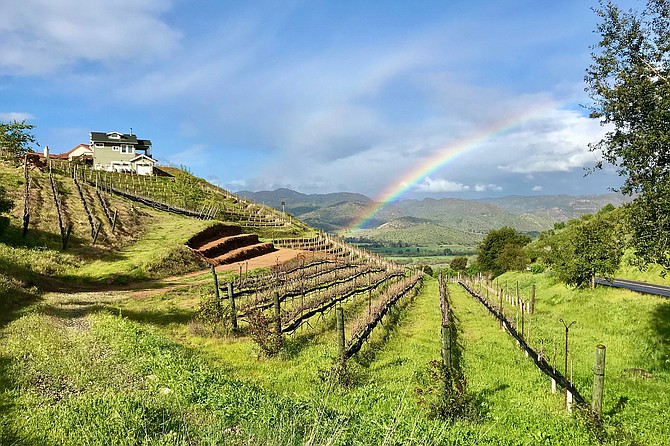 A rainbow breaks over Highland Valley Vineyards in Escondido.

It wasn’t all bad news for the San Diego wine industry. As the number of active wineries rose to 150, winery jobs notched up 2.6 percent. Its now 720 winery employees took home an average of $40,716, continuing a five-year upward trend that makes San Diego wine wages, as the report says, “competitive with industry wages paid in Santa Barbara County and Santa Clara County.”

Which isn’t to say service employees weren’t affected. Ed Embly, president of the San Diego County Vintners Association and owner of Escondido winery, Hungry Hawk Vineyards, explains that covid’s impact on winery employment differed based on the type of job and type of winery. “The vineyards and the winery operations themselves were considered essential functions,” he says, “It was really the tasting room staff that was laid off.”

While winemakers and growers continued the work of producing a 2020 vintage, many servers experienced two rounds of furloughs — the first during last year’s spring shutdown, the second during the winter on-premise service ban. Urban wineries likely bore the brunt of ever-changing regulations, which at different times included meal requirements, outdoor service only, and/or reserved seating only.

Embly knows of one or two wineries that closed during the year, for reasons not related to covid, but for the most part it looks as though San Diego wineries weathered the storm. The report shows that one-third of the wineries received help from government programs, either the PPP (Payment Protection Program) or EIDL (Economic Injury Disaster Loan). Benefit amounts ranged from $1,000 to $364,100 for each winery, totaling $3.5 million for the region.

However, for many wineries, it wasn’t an option. “Maybe 50 percent of the boutique wineries probably don’t have employees,” Embly points out, rather they’re family owned and operated. “A lot of the programs didn’t address their issues.”

By far, the majority of San Diego wineries are very small, producing fewer than 5,000 cases per year. During the shutdowns, many were buoyed by loyal customers ordering bottles and cases for curbside pick-up or home delivery. Winery employees and even owners, including Embly, became de facto delivery drivers. However, while direct-to-consumer shipping in the wine industry nationwide increased 27 percent in 2020, most of those gains were experienced by large brands. For small wineries, the growth was more modest. For San Diego’s wineries, direct-to-consumer shipping rose 4.3 percent, ultimately not enough to overcome the report’s tally of, “tasting room losses in the range of 18-38-percent, and bottle sale losses in the range of 30-50-percent.”

However, given that winery tasting rooms were closed roughly a quarter of the year, it could have been worse. Embly sees reason for optimism, beginning with customers already seeming to view outdoor winery tasting in rural East County as a pandemic-friendly activity.

“Once it was opened back up, people returned,” he says — at least when the weather has been nice. Lately, that means customers have been reserving tasting times and showing up to try wines in person. The Economic Impact report suggests they were most likely to find the top five wines produced in San Diego, by volume: Cabernet Sauvignon, Syrah, Sangiovese, Merlot, and Cabernet Franc (which for the first time this year surpassed Zinfandel).

While overall production dipped in 2020, Embly expects it to return in 2021. “Our industry will bounce back,” Embly says. “It might not have been easy, but it’s a resilient group of people who have wineries in this county.”

Home Videos The WORLD of WINE – Wine News. Cheap wine, tasting notes and cooking with wine The World of Wine – May 2021 … END_OF_DOCUMENT_TOKEN_TO_BE_REPLACED

How to visit Napa Valley on a Budget. In this video Carson and I explain a few ways to enjoy Napa on the cheap. Tip and advice about how to visit Napa … END_OF_DOCUMENT_TOKEN_TO_BE_REPLACED

Home Videos Get To Know Argentina Wine | Wine Folly If you love Malbec, Argentina is your ultimate wine region. But that’s not … END_OF_DOCUMENT_TOKEN_TO_BE_REPLACED