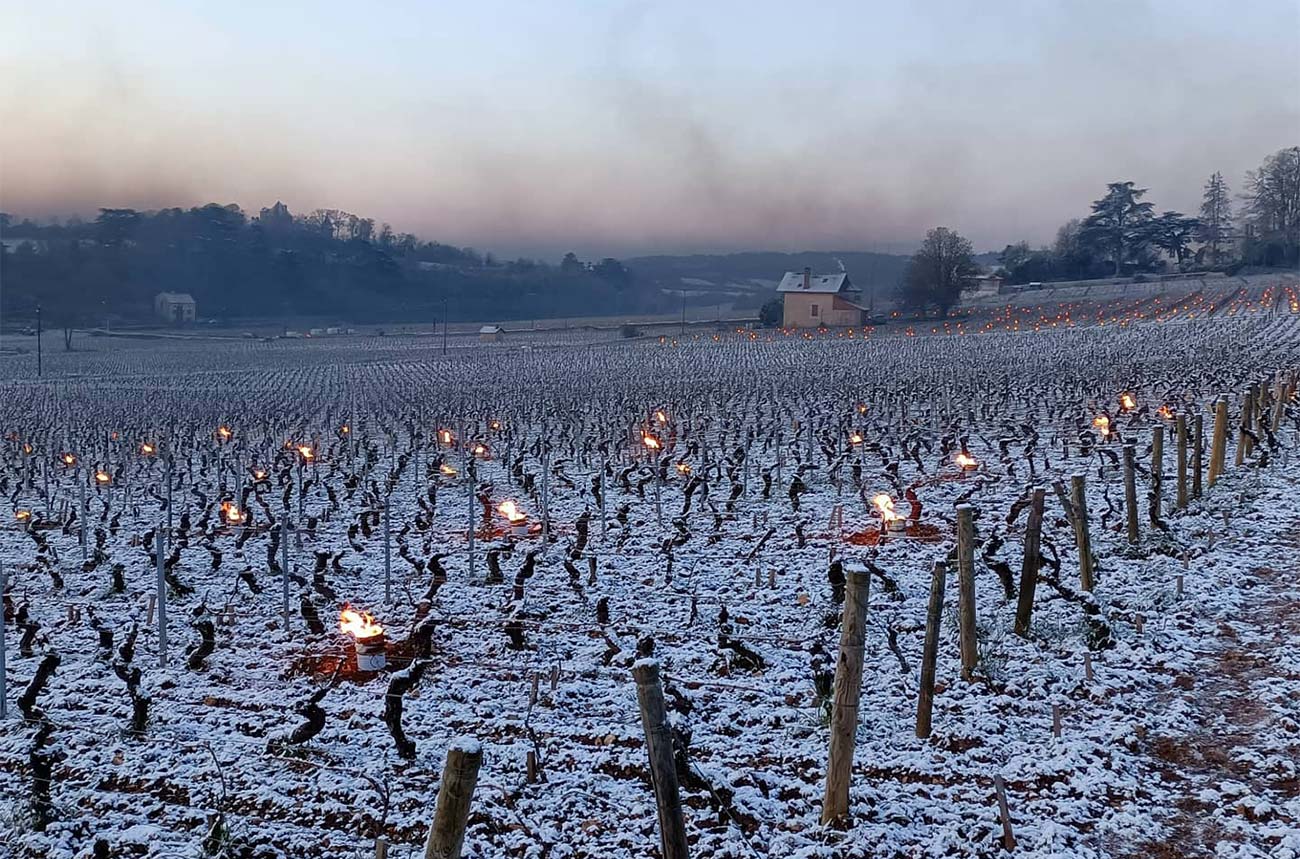 From Burgundy to Bordeaux to Champagne, winemakers were concerned about potential frost damage in their vineyards over the first week of April.

Frost is a particularly big risk for cool climate wine regions, where it can severely damage the newly emerging buds – especially at this time of year.

‘The last three nights, with temperatures between -3°/-6° [Celsius] and the snow on the night of  the 6/7 April, very seriously damaged the vineyards of Chardonnay at Domaine Belleville,’ Jean-Luc Vitoux, of Domaine Belleville in Rully, told Decanter.

Bordeaux wine council, the CIVB, also said the impact of frost was severe across large parts of the region’s vineyards, but that full extent of any damage was still being assessed.

There were also reports of frost in the Jura, Languedoc, the Rhône and the UK. The Languedoc Wines council (CIVL) said on its Instagram account they were ‘keeping their fingers crossed for the 2021 vintage.’

The French council for appellation wines (CNIV) said in a statement it was concerned ‘further episodes of frost are to be feared in the days to come.’

Here’s some techniques and action-shots of how winemakers seek to limit frost damage on their vines.

At Ridgeview in Sussex they use ‘bougies’ – large paraffin candles which give off enough heat to create air movement which prevents a frost pocket forming.

‘Our vineyard team stay up overnight, constantly checking the weather stations for sign of a frost and when the temperature does drop, they must quickly head out to the vineyard to light the bougies,’ Hannah Simpson-Banks, Retail and event manager at Ridgeview, previously told Decanter.com.

‘It takes our team around 50 minutes to light them all,’ said Simpson-Banks.

At Woodchester Valley Vineyard in the Cotswolds, they reported on Instagram ‘Our frost candles were lit in the early hours of this morning for the first time this year at Stonehouse on a small plot of Chardonnay vines which are on the point of bud burst and vulnerable to frost damage at temperatures of -3.3 and below. As the thermometer plummetted to -2.7 at 3.30am, it was simply too risky to leave the vines unprotected.’

‘We are trying to move air as much as possible to warm up the local immediate environment. We have big fans running through the night to to try to move the air,’ said Ian Kellett, from Hambledon Vineyard, in Hampshire, speaking to Decanter.com in 2017.

At Jacky Blot in the Loire, they use fans which draw in cold air and blast it upwards – a replacement method to the expensive helicopters they were using previously.

Two helicopters fly above vines, effectively whirling cold and warm air in order to raise the temperature in the vineyard and preventing late frost on a vineyard in Obersulm, Germany. Credit: Christoph Schmidt/dpa/Alamy Live News

Helicopters are also used for air displacement to help prevent frost, although this is not quite as common – though they have been used in St-Emilion and Pomerol this week.

Other common methods include using heaters in the vineyard, to keep the air too warm to allow frost to settle, or using sprinklers – which help to keep the temperature above freezing.

Frost will rarely affect a vineyard region equally, and the risk is a consideration when choosing a site.

Factors for winemakers to consider in the vineyard include choice of site and variety, and trellises, which can mitigate frost to an extent.

What is smoke taint in wine?

Home Videos The WORLD of WINE – Wine News. Cheap wine, tasting notes and cooking with wine The World of Wine – May 2021 … END_OF_DOCUMENT_TOKEN_TO_BE_REPLACED

How to visit Napa Valley on a Budget. In this video Carson and I explain a few ways to enjoy Napa on the cheap. Tip and advice about how to visit Napa … END_OF_DOCUMENT_TOKEN_TO_BE_REPLACED

Home Videos Get To Know Argentina Wine | Wine Folly If you love Malbec, Argentina is your ultimate wine region. But that’s not … END_OF_DOCUMENT_TOKEN_TO_BE_REPLACED