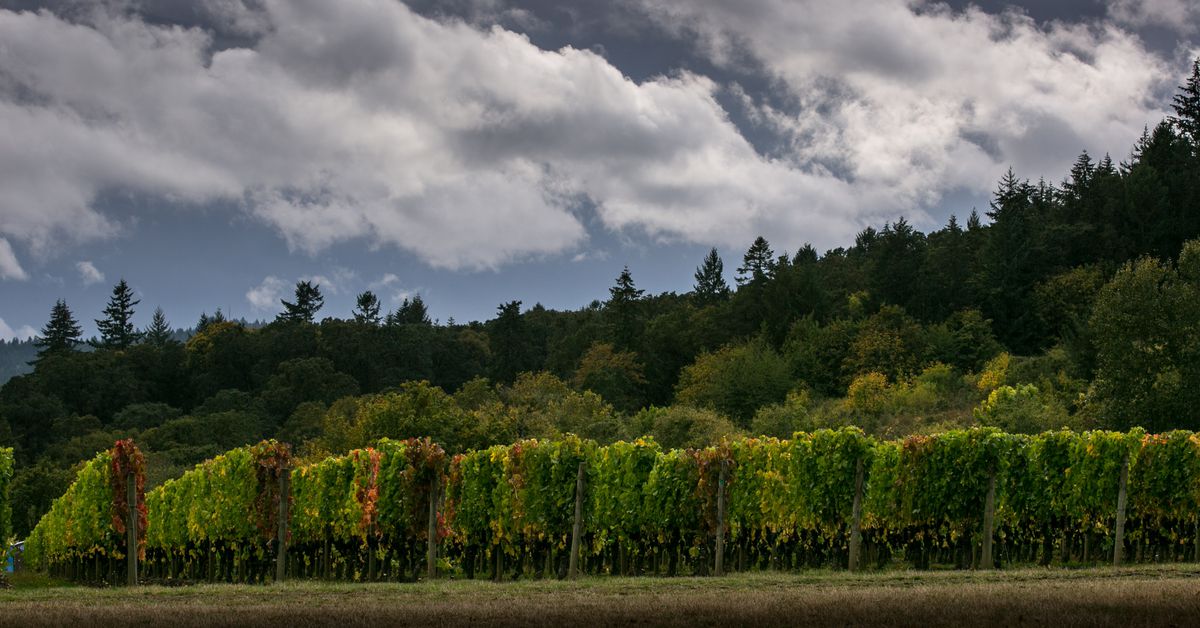 Brianne Day is an American winemaker working in the Willamette Valley, just south of Portland, Oregon. There, she owns and operates Day Wines, an eclectic indie label of lauded wines sourced from throughout the state of Oregon, as well as Day Camp Winery, a tasting room and winemaking facility home annually to around 10 other independent winemakers.

Day Wines launched in 2012, and soon after scored a scene-making invite to RAW London, the influential international wine fair. She now makes 6,000 cases annually, with standouts including a benchmark Oregon petillant natural, “Mamacita,” as well as a five grape Willamette Valley white blend, Vin de Days, modeled on the white wines of Alsace.

But since the spread of COVID-19 forced restaurants and wine bars to close and bottle shops to pivot their business models, independent winemakers like Day have been faced with a range of uncertainties covering every step of the winemaking process. The timescale of wine involves making plans in March, such as purchasing contracts with vineyards and taking sales trips, that will impact decisions in September, from how many wines to bottle to how much help to hire. Now, Day must ask herself some big questions: How can I support my staff and the farmers I depend on for grapes? How much wine should I make this year? Should I even be making wine at all?

This ought to be a joyous time for Day — following a 2019 in which she broke personal sales records, in early 2020 Day received her first James Beard Award semi-finalist nomination, in the Outstanding Wine, Beer or Spirits Producer category. Instead it’s a different moment entirely. I spoke to Day from her home in Portland, Oregon. — Jordan Michelman

The last few weeks have been awful. Business has ground to a complete halt. This time of year, distribution sales are the bulk of my income. I was fortunate that February was the best month of sales I’ve ever had, but the majority of that is for invoices that are still outstanding. Distributors in the wine industry pay on 30 to 60 day terms, and I don’t anticipate I’m going to receive that money soon, if ever. So many of the distribution companies I work with are small, family run operations, and I don’t know how they’re going to survive without restaurants or retail shops operating normally.

Wine retail is able to do some business right now, curbside pick-up and things, but restaurants really make up the bulk of my customers. I’ve gotten emails from distributors and they aren’t feeling very optimistic right now. If the majority of restaurants reopen in two or three weeks, we might pull out of this but if it drags on for months there are many, many small makers like my winery that aren’t going to make it.

So far I’ve had to lay off two of my three employees, because wine tasting rooms have had to close just like bars. There’s no point in having tasting room staff there. I’ve taken on all online sales and all of our customer service, in addition to managing the winemaking. I’ve been completely over my head. You might hear some people say things like “Oh, I’ve got all this time off now,” and it’s like — I don’t.

My son Viggo is two and a half, and he’s with me 100 percent of the time right now. I’m trying to keep my son at home while I do the bookkeeping and run the entire business. I have managed to keep my assistant winemaker for now, and we’re preparing to make wine in April — I have wine in tanks and a date scheduled with the bottling truck, but I have no idea how we can manage operating the bottling truck while maintaining a six-foot distance.

When you’re bottling wine you are typically right next to each other, working in the same area. Small wineries like mine that either can’t afford to pay for their own bottling equipment or don’t want to deal with really fussy machinery, can hire a bottling service to bring a whole bottling operation directly to their sites — this sanitized, perfectly functioning operation shows up with all the equipment you need to bottle wine, and then all you have to do is hook up a hose from your tanks into the truck. You load up your bottles, corks, and labels and get to work.

The bottling company supplies just one staffer to manage the truck, and I usually hire a crew of around six more people to run the operation: to dump glass, to put bottles that are finished into cases, to send those boxes down a conveyor to waiting workers who build and wrap pallets, before handing them off to a forklift driver to stack. The operator of the truck is inside keeping an eye on things, making sure all the labels are going ons straight, and then I’ll typically bounce into the truck every 20 minutes or so to check in with him, making sure he’s got enough corks and labels and that the bottles look consistent. The truck is really loud — in order to keep over six-plus feet away from somebody I’m going to have to really shout.

People are on top of each other the whole time throughout this process; I don’t know how to have someone labeling and stamping boxes and then not have someone come up next to them to grab the boxes. It’s going to end up slowing the whole thing down considerably in order to be sensitive to the six-foot rule. We’re going to need to have a plan.

It’s really hard to predict what’s going to happen next harvest. I had a conversation with one of my grape growers earlier this week, because they of course are seeing all this too. The growers want to know if they should farm their entire vineyard, because farming costs are calculated per acre, and every acre costs money. If they aren’t going to be able to sell the grapes they won’t be able to farm their own vineyards. We’re trying right now to predict how soon this will be over when it comes to grapes in the fall — will there be demand for wine, or is that just stupid of us?

I won’t make as many wines as I normally do this year. I just talked with my distributor in New York and they’re still doing retail sales, but so much of what’s selling right now is in the under-$25-per-bottle price range. That part of the sales market will probably rebound the quickest. By-the-glass pours and low-priced bottles are going to be so important, so maybe those should be the only wines I make. Or maybe, I should make a lot less wine overall, and focus on those that fall into a pricier bracket so I don’t miss a vintage altogether. Looking at the inventory we’ve got now, it could last a while, but I hate to miss a vintage, and I don’t want to pull out the rug from my growers either. But it’s so hard. We’re having to make all these decisions now, and they could end up being the wrong decisions. I just don’t know.

It feels like the years I’ve spent building a sales market for my wines has all come undone. We’re being set back five years which is devastating for a small company like mine. I’ve lost sales trips. I’m supposed to be in the Carolinas right now, and my direct sales manager is supposed to be in Ohio right now — all canceled. This week was supposed to be the announcement for the next round of the James Beard Awards, and that’s been postponed. Believe me, I did not have high hopes for getting shortlisted, but I felt like, “Wow, finally maybe I can stop hustling so hard because of what this will mean for my reputation.” I was keeping my fingers crossed as hard as I possibly could, but obviously it’s all not happening right now. We’ve had local events canceled here in Portland, too. Nobody is scheduling anything. There are no wine promotions.

I wish the government would just pull the trigger and make everyone stay put for two weeks. The sooner we can get everyone on board with being in quarantine, the sooner we can go back to normal life. But this dragging our feet, half-ass quarantine with no enforcement isn’t going to do anything. It’ll just drag on and on and on, which means the longer it drags on, the longer restaurants are out of business and venues like our tasting room are closed.

The wine industry has been mostly quiet so far, but the restaurant industry has been vocal, which I appreciate. In the wine industry we can put things on hold — we can put things in barrels, wine can sit in a tank, we can wait. We aren’t hurt by this immediately like the restaurants, so my primary worry is for the health of my loved ones. My sister works in emergency medicine and I worry about her constantly. I feel like we need to buckle down and close everything for two weeks and put the health of our healthcare workers and our sick relatives ahead of everyone else. The health of my family and everybody else’s families is more important to me than how we’re going to make businesses work. We’ll make them work somehow — I can’t see how right now, but I know something will work out. Although I do have to say: I don’t know what the point is of [stimulus package] loans nobody will be able to pay back. Why aren’t those grants? Why are they lending when they need to be granting us money? I think it’s fucking bullshit.

I’ve been a mortgage broker, I’ve been a locksmith, I’ve been a restaurant server and a wine director, and I know I will be able to take care of myself and my son whatever happens. It might not be in such a dreamy way as it has been for the last few years: owning my own winery and making wine. Maybe that part of my life will come to a close. I’ve had a blessed existence the last couple of years and if that’s not how it is forever, it sucks, but we’ll move on. But I won’t be okay if something happens to my sister. If wine goes out of business in America tomorrow, or goes back to the Stone Age and we’re all stuck drinking Gallo [the largest commercial winery in California] again, it’s not the end of the world. It will suck, but it’s not the end of the world.

Home Videos The WORLD of WINE – Wine News. Cheap wine, tasting notes and cooking with wine The World of Wine – May 2021 … END_OF_DOCUMENT_TOKEN_TO_BE_REPLACED

How to visit Napa Valley on a Budget. In this video Carson and I explain a few ways to enjoy Napa on the cheap. Tip and advice about how to visit Napa … END_OF_DOCUMENT_TOKEN_TO_BE_REPLACED

Home Videos Get To Know Argentina Wine | Wine Folly If you love Malbec, Argentina is your ultimate wine region. But that’s not … END_OF_DOCUMENT_TOKEN_TO_BE_REPLACED