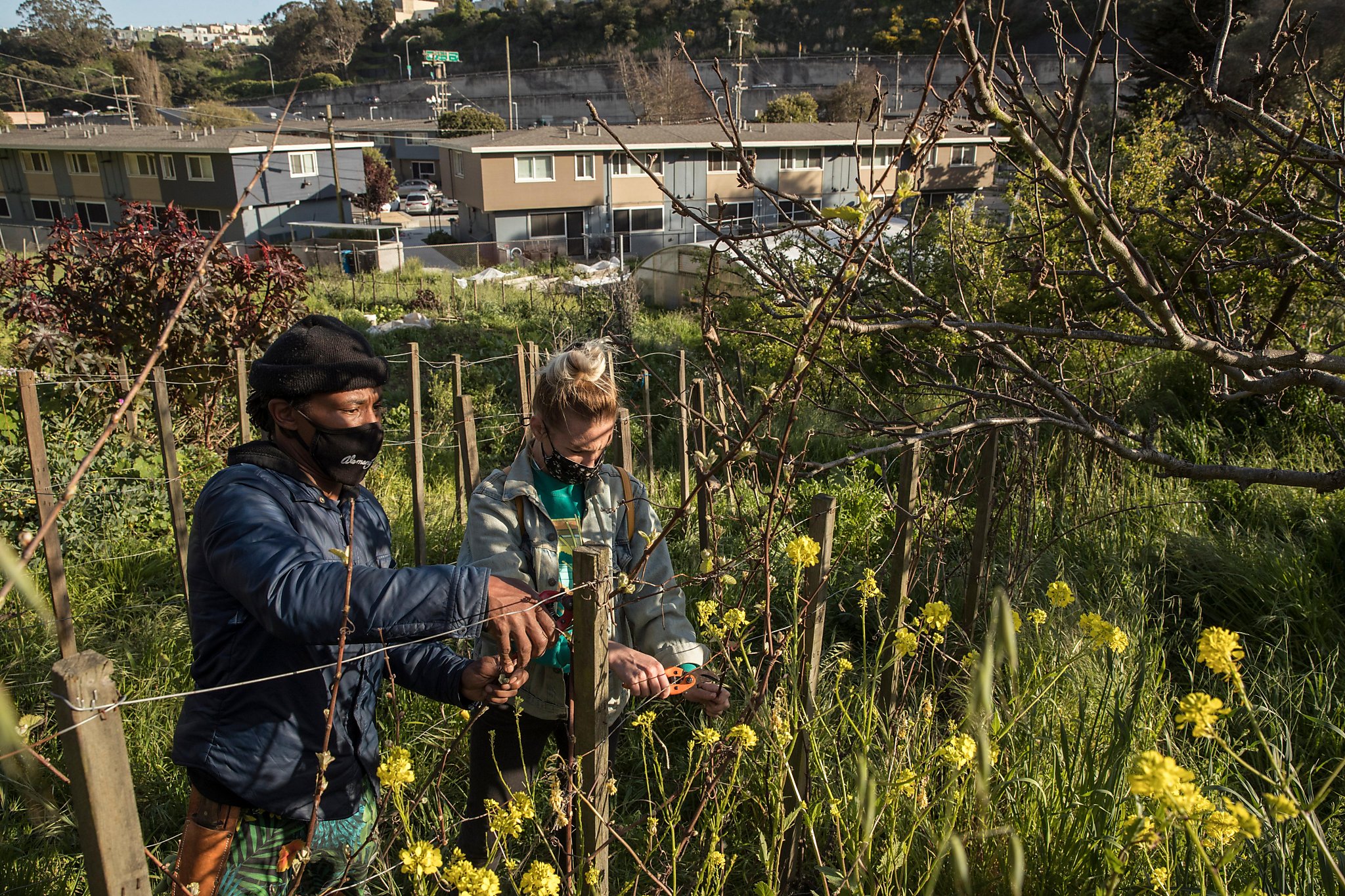 On a lush, overgrown hillside overlooking Alemany Boulevard and Interstate 280, Christopher Renfro is growing a tiny, but potentially important, vineyard.

Growing wine grapes in San Francisco would be notable under any circumstances. Viticulture in the city is pretty much limited to a few optimistic backyard gardeners, a factor of both the dense urban layout and the weather — grapes don’t love constant fog and cold summers.

Yet Renfro’s vineyard is noteworthy for other reasons, too. Called the Two Eighty Project, this tiny urban vineyard may never produce much more than a few barrels’ worth of wine, but the ambitions are far bigger. Renfro is trying to make it a jumping-off point for all sorts of projects: cultivating rarely seen grapes, practicing farming that can combat climate change — and, with its location near the affordable housing complex Alemany Apartments, offering a place to help local youths forge careers in food and wine.

It starts with some unusual grape varieties: In addition to familiar-enough Pinot Noir, Gamay and Grenache Blanc, Renfro has planted the Austrian variety Zweigelt. Even more daring is Roger’s Red, an ornamental grape variety — the sort that’s typically seen not in a winery but adorning a decorative arbor. In a greenhouse, he’s propagating cuttings of grapes I had never heard of, like Merlin, Alden and America.

Those last vines are still in small pots, and it may be years before they are planted outside. Once they are, the maximum capacity won’t yield much, since Alemany Farm is just 3.5 acres. The currently planted grapevines comprise just a quarter of an acre; last year, they yielded just two bottles of wine, though this year Renfro expects more, now that he’s rehabilitated the plants.

Still, they are provocative choices.

Virtually all wine grapes grown in California are of a species called vitis vinifera, which is native to Europe. The established wine industry largely considers non-vinifera species, such as those that are native to North America, to produce wines of inferior quality. (Concord and Muscadine are two examples of North American natives.) Renfro has some esoteric vinifera cuttings in the greenhouse, like Beba, a Spanish variety, but the Merlin, Alden and America grapes are non-vinifera species, native to these shores.

It’s yet to be seen whether they can make a great-tasting wine — or whether they’re better just as table grapes. Last year Renfro and his partner, Jannea Tschirch, fermented some Concord grapes they’d foraged from a backyard on Church Street in San Francisco, and the resulting wine was, in Tschirch’s words, “icky.”

Even so, the impulse to give these maligned grapes a chance speaks to a larger theme in Renfro’s mission. “I like the idea of taking what other people consider trash and turning it into treasure,” he says.

Owned by the city, Alemany Farm is operated by a nonprofit where Renfro works part time. Renfro and Tschirch tend the grapevines there in their spare time, with help from their daughters, 11-year-old Sula and 3-year-old Ahmarie. Just over the farm’s fence are the Alemany Apartments.

The idea for the Two Eighty Project grew out of Renfro and Tschirch’s longtime love of wine — and a sense of opportunity. Both developed a passion for wine while working in restaurants; before the pandemic, he was at Liholiho Yacht Club, she at the wine bar Fig & Thistle. They also live near Alemany Farm, in the Excelsior District, and found themselves frequently driving by, wondering what was happening with the small stand of grapevines on the hill.

They’d heard about a group called Neighborhood Vineyards, which had planted the Pinot Noir here in 2013, but couldn’t get in touch with them. By the time Renfro finally gained permission from Alemany Farm to take over the small vineyard plot, in January 2020, the Pinot had been neglected for at least two years.

Although Renfro had studied horticulture in school, neither he nor Tschirch had hands-on experience growing grapes or making wine. So he reached out on Instagram to Steve Matthiasson, widely recognized as one of California’s organic-viticulture gurus, initially just to ask some questions about pruning. The two hit it off.

Matthiasson sees promise in the Two Eighty Project site, despite perceptions that San Francisco wine-growing might be a fool’s errand. “There’s so much dogma in viticulture about which grapes can grow where,” says Matthiasson. “As long as it doesn’t get so cold that it kills the vines, they’re going to be fine.”

It’s too soon to know what the character of the wines will be, but “it could be a really exciting Pinot,” Matthiasson says, “maybe like a Savoie-style, crunchy, red-fruited wine,” referring to the wine region in the French Alps.

But making tasty wine is only a small part of what Renfro hopes to accomplish. First up: He and Matthiasson are working with UC Davis Professor Elisabeth Forrestel to create a paid internship for students of color that would give them experience working in vineyards, which would likely involve stints at both the Two Eighty Project and Matthiasson’s vineyards in Napa. They’ve put together a grant proposal and are on the hunt for funding.

Wine can often come across as a snooty, upper-class pursuit, but Renfro hopes that by making urban viticulture more visible he can help expose more people to the idea that wine is about farming and taking care of the land. He wants the children who live in the Alemany Apartments to feel comfortable exploring the farm that’s literally in their backyard, learning about the plants that grow there and becoming interested in how their food is grown.

Once a month, he and Tschirch cook big meals in an outdoor kitchen at the farm and offer them free to residents of the apartments, hoping they might spark an interest in the farm — and in food in general.

Funneling more people into the wine and farming world, whether as professionals or just informed enthusiasts, may serve a larger social purpose too, Renfro says. He sees it as a way to help rectify the historical injustices of land ownership in America.

It’s no secret that Black Americans have historically been disenfranchised from agricultural land, which can be a source of generational wealth. Since 1920, the percentage of U.S. farmland owned by Black people has dropped roughly 90%, to the point where just 1.4% of farmland is now Black-owned, according to U.S. Department of Agriculture data.

Over the years, as Renfro became enmeshed in the California wine world, “I saw that history really hadn’t changed,” he says. “You still have white landowners, and people of color working the land.”

It will take long-term, systemic changes to shift that dynamic, but Renfro hopes that he can help achieve that. By building his own business. By supporting other people of color who are trying to break into the industry. And, ideally, by eventually buying some land himself.

He and Tschirch already have their eye on buying a plot — they won’t say where — for a commercial-scale vineyard site. In the meantime, they’re expanding their activist viticulture to a second urban setting: Adam Rogers Park in the Bayview, another city-owned park where they plan to plant vines next month.

The grand vision adds up to something pretty demanding for what Renfro calls his “weird garden on top of the freeway.” But it’s got to start somewhere.

Home Videos The WORLD of WINE – Wine News. Cheap wine, tasting notes and cooking with wine The World of Wine – May 2021 … END_OF_DOCUMENT_TOKEN_TO_BE_REPLACED

How to visit Napa Valley on a Budget. In this video Carson and I explain a few ways to enjoy Napa on the cheap. Tip and advice about how to visit Napa … END_OF_DOCUMENT_TOKEN_TO_BE_REPLACED

Home Videos Get To Know Argentina Wine | Wine Folly If you love Malbec, Argentina is your ultimate wine region. But that’s not … END_OF_DOCUMENT_TOKEN_TO_BE_REPLACED