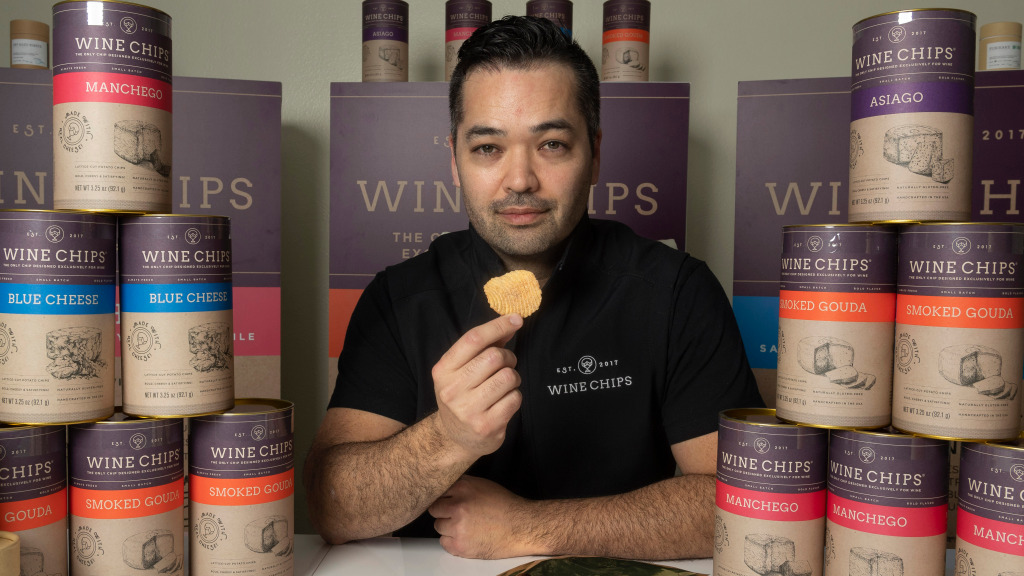 It all started with a glass of $8 pinot noir and a bag of potato chips.

High tech entrepreneur Jonathan Strietzel was working on a project, got the munchies and took a break. That fateful snack was so satisfying it became his next major business venture.

“I went, ‘Oh my gosh, this is soooo delicious together!’ Being an entrepreneur, ideas just started firing off in my brain,” he said. “You quickly start putting it through the gamut. It started as a simple idea that night and it just quickly grew like a weed.”

Strietzel founded winechips.com in 2017, enlisting the help of his family along with experts in tech, branding, seasoning, even master sommeliers. Now he’s got $1 million in online orders and his product is carried in 600 shops nationally, offering a cheese line with flavors such as Manchego to pair with rosé; blue (sauvignon blanc), smoked gouda (cabernet) and Asiago (pinot grigio).

We had to find out more about how his snack attack launched a Southern California luxury product that’s catching on like wildfire.

Q: Gringo Bandito private reserve hot sauce, Truff hot sauce and pasta sauce and now Wine Chips. That makes three luxury food products based in Huntington Beach. Is this getting to be a thing now?

A: I honestly don’t know. I am originally from Long Beach. I grew up here and went to Long Beach Poly (Polytechnic High School). My family’s all Long Beach Poly, USC, UCLA people. We started the company there and then we found a wonderful commercial kitchen in Huntington Beach and opened up our operation in 2019. The official launch was at LAWineFest in Long Beach.

Q: So now you live in Huntington?

A: I moved to get closer to the kitchen. … We’ll see where we end up setting up a factory operation, but we’re looking at places that have large footprints, like somewhere in Vegas or maybe Texas …  But we do all our own distribution from here in Huntington Beach. We do all our own cooking here. It’s all handmade.

Q.:What did you do before this?

A: I pretty much dropped out of college to start my first tech business. When I was 19, I filed these patents and we started a company right before the bubble burst. So I ended up with all of these amazing patents. I went back to  finish my schooling when no one was touching tech companies in 2001.

A: I was a guest speaker at USC, UC Irvine and Chapman. … Jim Doti (former president of Chapman University) said, “Hey, if you wouldn’t mind coming here, we’ll hook you up to finish your schooling.” I actually finished in two years and they made some introductions to their board of trustees. So that was great.

A: I started Big Stage Entertainment right away. I brought in a gentleman named Jon Kraft, he’s our president at Wine Chips and he was the co-founder of pandora.com, and Jon Snoddy, he was a really well-known technologist. (Snoddy had been a senior concept designer for Walt Disney Imagineering and later returned there to be a studio executive and senior vice president). So basically I started the company with those two gentlemen, and then we ended up selling in 2011.

Q: What do your tech buddies think of you going into the potato chip biz?

A: All my friends in tech were like, “You’ve been successful at tech. What are you doing? Are you really going to drop everything and go do this?” I had pictures of myself with my family, with a hairnet on and an apron at a fryer. … It just went viral among our executive friends.  “Jonathan has fallen off the boat!”

Q: Remember what they say: How do you make $1 million in wine? Start with $3 million.

A: Absolutely. What it came down to is I knew there was a big idea here that was being overlooked by everyone. It takes a lot of entrepreneurial failures and some wins and a lot of time in order to have the confidence that you think you see what everyone else doesn’t see. … And so I knew I had to push through.

A: The irony is in order to be successful, pain is required. And I knew that out of all the research I’d done, all of the business books I read, that was a theme that continued to reveal itself.

Q: I think you just gave away the epic theme of your next Ted Talk.

A: But it’s true! If we care about the country and we care about growing businesses, we have to show people the pain that is required. It’s like a rite of passage. If you want this, be prepared to do this, and then beautiful things will happen.

Q: So, you had already roped your girlfriend and your family into working nights and weekends. How did you get the experts on board?

A: After a lot of research it just hit me, I need to make this a wonderful product for women to completely enjoy, and then men will just follow. And so I said, “Who is the right person for this?” And in my network, one of my best friends is Sara Rotman. She owned a branding agency on Madison Avenue called ModCo.  She is the woman who designed the Tory Burch logo.  And her agency became pretty famous because of that. And they ended up doing branding contracts with Vera Wang, Nina Ricci, Carolina Herrera, everybody.

She sold that agency, made a ton of money and moved to Santa Barbara. We had developed a relationship like brother-sister,  two peas in a pod. I went to her and said, “Sara, I think we should make the world’s best potato chips.” And she looked at me and I don’t even want to tell you the verbiage she used, being a New Yorker, but she basically told me to go screw myself.

Q: I don’t think they eat a lot of Ruffles in Montecito.

A: But after a little bit of convincing and exposing her to what I felt like I saw in terms of the opportunity she got quiet on the phone for probably five minutes. It felt like an eternity, I said, “Are you there?” She’s like, “I’m thinking.” And then finally she went, “I never thought in my life I would ever say this, but let’s make some potato chips.”

Q: Then you pulled in master somms. What’s their role?

A: There’s a big difference between a master winemaker, and a master somm and I ended up going with my gut saying, “If we want to be the No. 1 wine snack in the world, we have to have the best people at wine pairing and service, designing products that truly service their customer.”

Q: So tell me about the chip. It’s lattice cut and it’s thicker than a kettle chip?

A: We made a very conscious decision at the beginning that a woman should be able to hold a wine chip in her hand and eat it in a single bite. So we source and cut all of our potatoes to that spec. And we wanted crunchiness, we wanted it to pop, we wanted it to be hefty. We didn’t want it to crumble in your mouth.

Q: What about the flavors?

A: They’re extremely flavorful, but when you have the wine in your mouth and you’re pairing, it actually works together instead of the wine overpowering the chip. And we’re really tasting a lot to determine that balance, that this Manchego chip’s got enough flavor. So, when you put it with almost any rosé, the rosé doesn’t dominate the chip.

Q: On the website you’ve got a club. How’s that work?

A: We have our normal line, which is our cheese line. And then we have our club lines. That’s our research and development lines. We build flavors — like Thai Lemongrass,  Dry-aged Ribeye, Hawaiian Red Sea Salt, Spicy Calabrese, Sweet Coconut Curry — we do pairings and we try them. And if they’re popular enough, we’ll graduate them (to the regular lines).

Q: So where do you see Wine Chips being served? What’s the best occasion?

A: Any time people are coming together to drink a glass of wine, relax, talk and catch up. That’s where Wine Chips should be.

Find it: Wine chips offers starter kits ($19.99 for three 3-ounce bags), gift sets and more. Visit the website to order and to join the club, winechips.com.

Home Videos The WORLD of WINE – Wine News. Cheap wine, tasting notes and cooking with wine The World of Wine – May 2021 … END_OF_DOCUMENT_TOKEN_TO_BE_REPLACED

How to visit Napa Valley on a Budget. In this video Carson and I explain a few ways to enjoy Napa on the cheap. Tip and advice about how to visit Napa … END_OF_DOCUMENT_TOKEN_TO_BE_REPLACED

Home Videos Get To Know Argentina Wine | Wine Folly If you love Malbec, Argentina is your ultimate wine region. But that’s not … END_OF_DOCUMENT_TOKEN_TO_BE_REPLACED