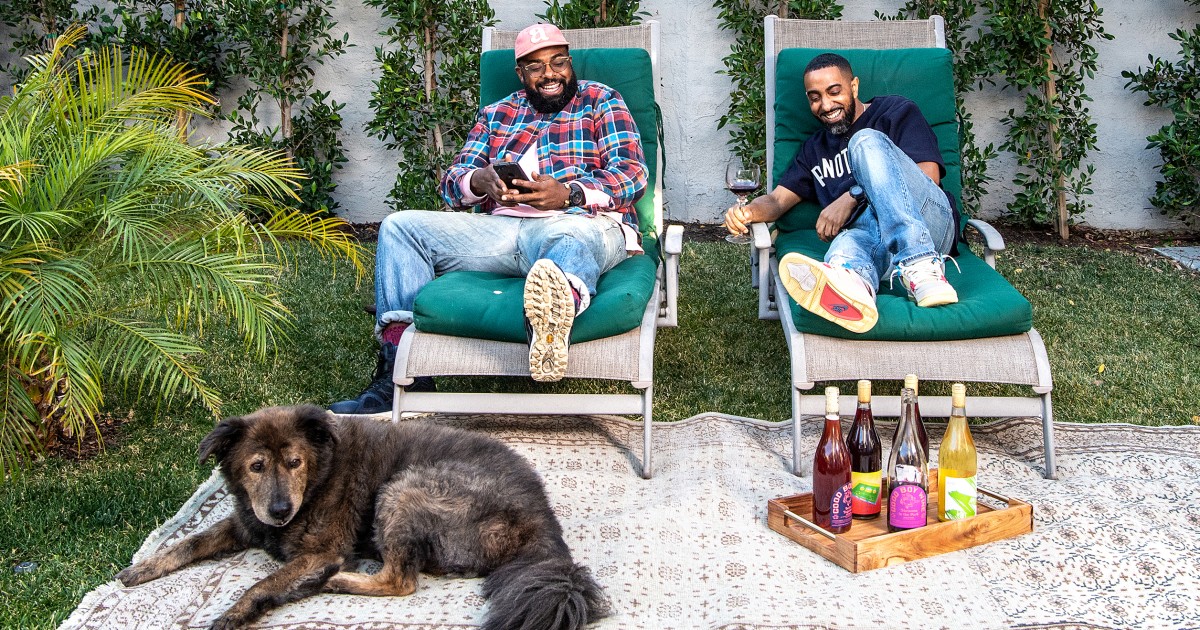 Like so many Americans, Simonne Mitchelson’s heart hurt as she watched the killing of George Floyd last spring. But her heart broke when her industry, the wineries of California’s Central Coast, largely remained silent even as many other businesses across the country pledged to address racial injustice.

For support, Mitchelson reached out to Justin Trabue, the only other Black person she’d ever met in the local wine community. Both of them believed it was time to take direct action to promote racial inclusion in wine.

Eric Bach and Cameron and Marlen Porter, who produce Central Coast wines, were also disturbed by the industry’s lack of diversity. They too felt Floyd’s death demanded action.

Two hundred miles to the south, two wine enthusiasts, both of them Black men, had come to the same conclusion. Khalil Kinsey, a Los Angeles art curator, and Teron Stevenson, a partner in a pair of L.A. wine bars, told each other that Floyd’s death could help catalyze diversity in wine.

In the interconnected wine world, it took only a bit of kismet to bring all of them together. A few weeks of Zoom meetings produced a plan to bring diversity to the industry they all love and honor to the memory of a man whose death forced them to see the industry with new eyes.

Their plan: raise college scholarship funds to support BIPOC (Black, Indigenous and people of color) students who want careers in wine. They’d do it through a Black-culture-centric wine club.

“The least expected consequence of George Floyd’s death,” says Lou Garcia, vice president of the Association of African American Vintners, has been the rush to create diversity in wine.

A former CFO with Hall Wines in Napa Valley and owner of Stover Oaks, a negociant brand, Garcia knows how it feels to be the only Black person in the room at wine industry conferences as well as consumer tastings.

Wineries, he says, are realizing this is their problem to fix.

A Black South African who immigrated to America as a child, Mitchelson had followed her wine dreams to New Zealand, Tasmania and the Napa Valley before her recent move to the Central Coast, where she works as the South Coast Estate manager at Jackson Family Wines in Los Olivos. .

Wine is a rural industry, by definition, located in less diverse places, Mitchelson says. The Central Coast, equidistance from California’s dominate urban centers, is particularly so. “No exaggeration, outside of the people working in the fields, it is glaringly white.”

Already feeling isolated by the pandemic, Mitchelson penned an emotional plea to the industry to diversify after Floyd’s death. Although she’d met Trabue, who works in hospitality at Ancient Peaks Winery in Santa Margarita, just once, she asked for her thoughts.

Together, they polished, signed and emailed the letter to wineries up and down the Central Coast and posted it to social media in early June. “Your silence is deafening,” they wrote. “The wine industry is one of great power in this country, but has always been out of reach for Black people and people of color.”

They asked wineries to join the fight against racism by donating to R.A.C.E. Matters, an organization in San Luis Obispo that amplifies racial justice issues through social, cultural and artistic events.

“It opened doors and created conversations I never imagined,” says Trabue. “It was all about positive change, creating diversity and inclusion opportunities.”

A few weeks later, the pair sent a second fundraising email to a handful of local wineries, this time to create a BIPOC scholarship to the wine and viticulture program at Cal Poly San Luis Obispo, Trabue’s alma mater. The first donation was $25,000; within a month they’d raised $100,000.

Mitchelson and Trabue were part of a community awakening, says Courtney Haile, co-founder of R.A.C.E. Matters. Her organization has since received close to $100,000 in community support.

Cameron Porter and his winemaker wife, Marlen, who own Amplify Wines, were among the Central Coast vintners who received the first email from Trabue and Mitchelson and were inspired. Marlen says she knows how the women feel. “As a Mexican American … as a person of color, it wasn’t easy to be taken seriously as a winemaker,” she says. “I am passionate about helping other women of color.”

Bach, who owns Good Boy Wine and is a friend of the Porters, was inspired as well. Bach and Cameron Porter are white.

“There is an obvious lack of diversity in wine,” Bach says. The three winemakers wanted to do more to ensure racial equity in wine and reached out to Khalil Kinsey and Teron Stevenson.

Kinsey is the general manager and curator of the Kinsey African American Art & History Collection, a traveling exploration of the cultural contributions of Black Americans. Stevenson is co-owner of the Friend , a wine bar in Silver Lake, and the Little Friend in Venice. The two wine buddies had been thinking about how they could best promote racial justice.

The group reached out to Mitchelson and Trabue, and the Zoom calls began.

According to Garcia, Black vintners account for less than 1 percent of the wine industry and the Black share of the consumer base isn’t much larger.

After Floyd’s killing, Garcia knew things were changing when he started getting calls from white-owned wine distributors, service providers and wineries suddenly eager to join the AAAV. By the end of the year, membership in the 20-year-old organization had grown from 17 to 115.

In 2019, AAAV had launched a wine education scholarship fund in partnership with the United Negro College Fund. The first year, donations reached $2,000. After Floyd’s death, “donations have poured in from across the wine industry” and reached $35,000.

“The millennial generation wants diversity in everything they do,” says Marcia Jones, whose marketing company, Urban Connoisseurs, works with AAAV. Scholarships can help make the wine industry “look like it includes everyone.”

Growing up in Ohio, Woodson, who is Black, says he had no exposure to wine. That changed during his first Oakland Raiders training camp in Napa Valley. “It was an eye-opening experience to be surrounded by wine and great food, having that enjoyable experience.”

“Our scholarships will appeal to a younger generation of African Americans, let them know this is something they can do. A career,” says Woodson.

The Zoom group quickly decided their social justice goal was to build on Mitchelson’s and Trabue’s work to raise scholarship funds. But they also wanted to broaden the audience for wine.

A wine club made sense. “Bringing new consumers into wine will take some toxicity out of the wine buying process,” says Trabue. “Wine should be on every table.”

They named their club Natural Action. While minimal-intervention, or “natural,” wines account for just a sliver of California’s wine industry, they connect everyone in the group.

Bach’s Good Boy Wine, vinified in a Glassell Park basement (he also makes wine in Buellton), and the Porters’ Amplify Wines fit the “natural” definition. It is the style of wine Kinsey and Stevenson like to drink and collect, and while Trabue and Mitchelson work full time on the business side of their wineries, they make “natural” wine on the side.

(The “natural” wine movement began in France in the 1970s and relies on organic viticulture, wild yeasts from the vineyard and minimal manipulation in the winery, particularly discouraging the addition of sulfites before fermentation. It’s a set of ideals, not regulated requirements, says Lou Amdur, a devotee of the movement and owner of Lou Wine Shop in Los Feliz. It accounts for less than 1% of the state’s wine production. In France, where the style is more firmly established, Amdur figures, it represents, at most, 10% of wine production.)

“Natural Action is an opportunity to bring Black culture together with wine culture,” says Kinsey. “The collection is in the business of sharing why Black lives matter.”

“Everything we do [with Natural Action] will be touched by Black and brown hands, hearts and minds,” says Kinsey. “We want to expand who sees themselves in wine, engage a different audience in wine.”

Last summer, when Mitchelson and Trabue were emailing their cri de coeur to Central Coast wineries, they made sure that Adrienne Ferrara received a copy. She and her husband own Clesi, a Templeton Gap winery. She also teaches in Cal Poly’s wine program. Trabue had been her student.

“I felt such pride,” says Ferrara, “She did something that took a great deal of courage.” Currently, she says, there are, “maybe” two black students in Cal Poly’s wine program. “It’s not just our program; it’s the whole industry.”

Ferrara championed Trabue’s efforts to make certain the fund is available to support BIPOC students admitted in the fall. “It was the right time for that email,” she says.

Home Videos The WORLD of WINE – Wine News. Cheap wine, tasting notes and cooking with wine The World of Wine – May 2021 … END_OF_DOCUMENT_TOKEN_TO_BE_REPLACED

How to visit Napa Valley on a Budget. In this video Carson and I explain a few ways to enjoy Napa on the cheap. Tip and advice about how to visit Napa … END_OF_DOCUMENT_TOKEN_TO_BE_REPLACED

Home Videos Get To Know Argentina Wine | Wine Folly If you love Malbec, Argentina is your ultimate wine region. But that’s not … END_OF_DOCUMENT_TOKEN_TO_BE_REPLACED