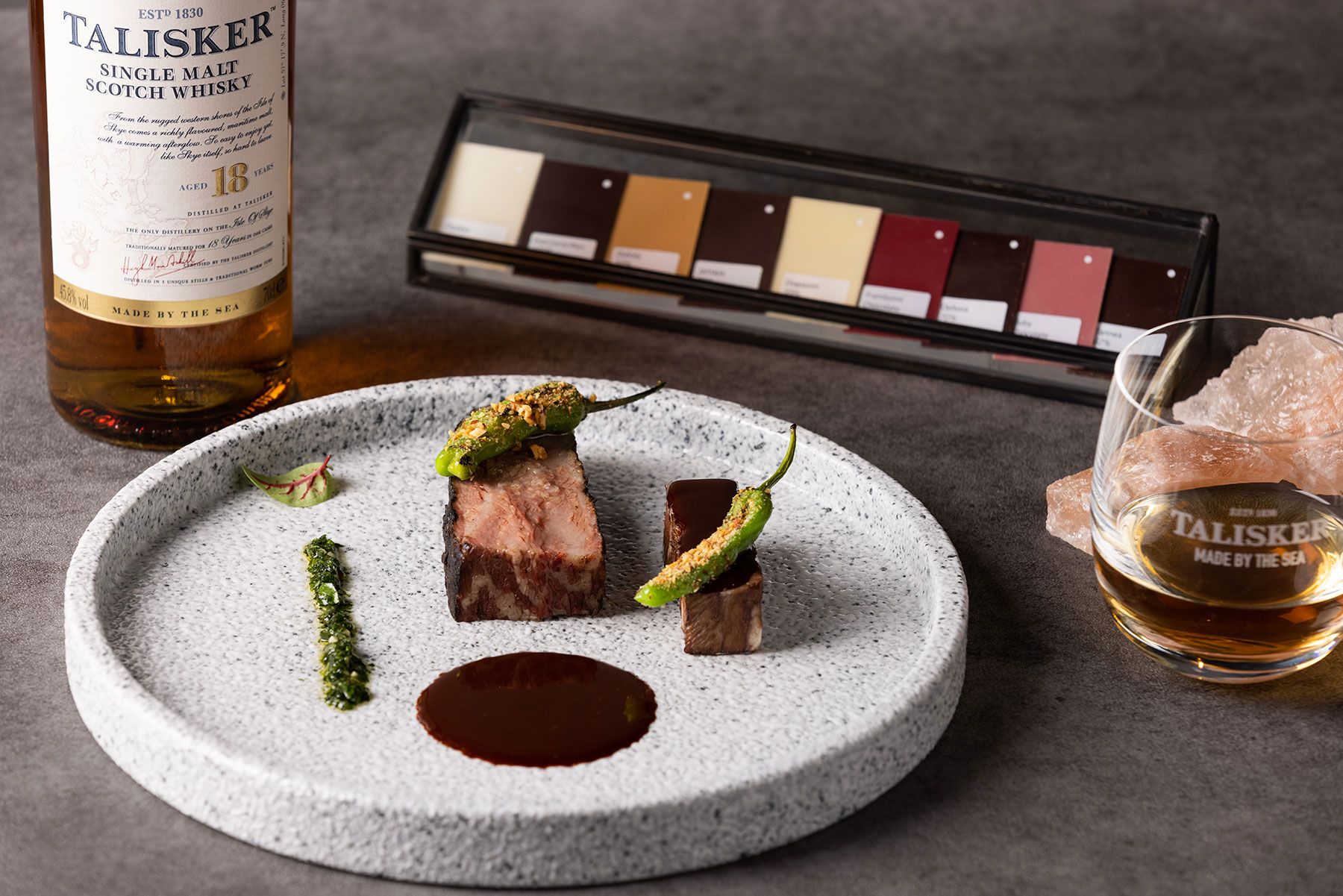 While the restaurant and hospitality industry contends with confusing new government regulations around separating vaccinated and unvaccinated staff and customers, one thing remains clear: the sooner people get vaccinated, the faster life will return to normal. Until then, this coming week brings news of unexpected collaborations and flavour experiments to whet your appetite and cast an eye towards the realm of culinary possibilities.

See also: A Taste Of Home: Chef Aven Lau Of Bâtard On His Favourite Places To Eat

Shao’s recipes tend towards spice-laden soup and sauce-heavy serves in a clear nod to his Sichuanese roots, achieving both depth and complexity through a skilled layering of fresh produce, different blends of spicy chilli varieties, textures and flavour combinations. Highlights from the extensive menu include the exquisitely presented boneless silky fowl and chicken fillets with dan dan sauce, xiao long bao with mala broth, Sichuan-style poached tiger grouper with assorted chillis, and beef brisket and tendon in chilli pepper broth. Other dishes offer thoughtful breaks from tradition, such as the flash-fried sweet and sour pork with figs, and braised bitter melon ‘noodles’ in broth, inspired by chef Shao’s four decades cooking Chinese cuisine abroad, from New Delhi to Saudi Arabia.

See also: The Winemaker Behind China’s Ao Yun Talks Producing Wine At The Foot Of The Himalayas And Its New Vintage

Though chocolate rules the roost when it comes to dessert, its use in savoury cooking is near impossible to find. Unperturbed, executive chefs Ray Choi and Devon Hou of Cobo House have barreled forward with an ambitious tasting menu where chocolate plays a substantial role in all of the dishes. And as if this premise were not challenging enough already, the chefs have also partnered with Talisker for a scotch whisky pairing throughout.

The meal begins when diners are presented with a glass rack of chocolate tablets denoting their name and percentage of cacao, and arranged in the sequence of the dishes that they feature in. Available in four, six or eight-course arrangements, the Bitter Sweet tasting menu features such creations as seared tiger prawns with white asparagus in Dulcey 32% white chocolate cream, paired with Talisker 10 Year Old; torched foie gras drizzled with Jamaya 73% dark chocolate ganache, paired with a smoked Old Fashioned with a chocolate lid; pan-fried Challans duck breast with celeriac mille-feuille and Framboise chocolate sauce, alongside a dram of rum cask-aged Talisker 8 Year Old; and Brandt grain-fed beef short rib and grilled beef tongue with Deltora 70% dark chocolate sauce and a tasting portion of Talisker 18 Year Old.

Those with an adventurous palate will be richly rewarded with this chocolate tasting menu, which showcases some surprisingly harmonious bedfellows when the worlds of haute cuisine and confectionary collide—much of the time, the chocolate component blends seamlessly into the mix, providing an extra layer of complexity and successfully replacing the sweet component necessary for a balance of flavours. If the whisky pairing proves too overwhelming for diners, however, there is a wine pairing that we expect will see its fair share of interest.

Available until May 31, the Bitter Sweet tasting menu ranges from HK$680 for four courses to HK$1,480 for eight courses, with an optional four-glass Talisker whisky pairing for HK$680, or six glasses for HK$980.

Those looking for a lighter take on Cantonese cuisine will find it in China Tang Landmark‘s early summer menu, which embraces seasonal ingredients grown locally and/or organically for added health benefits. Dishes such as braised bearded chicken with organic sweet potato, simmered Hokkaido Tokachi pork with wolfberry and chicken stock, doubled-boiled fish maw soup with papaya and snow fungus, and minced beef with watercress and 30-year dried tangerine peel have been designed by chef Menex Cheung to do good, not only to the environment and local agriculture, but also to the health of diners, with a focus on hormone-free, nutrient-rich, low-calorie and low-fat ingredients.

If a dinner series could act as a canary in the coal mine for the rapidly shifting character of Chinese cooking, it would be this three-way collaboration between young chef Sam Lui, 126-year-old snake soup purveyor Ser Wong Fun, and sustainable food initiative, Green Monday. Taking place over four nights at the end of this month, the ‘Omni Wok The World’ series sees Lui’s performative culinary alter ego, Wendy, cook up a storm in the kitchen of Ser Wong Fun, serving stir-fry classics that have been reimagined with the OmniPork plant-based meat. Imbuing dishes like OmniPork mapo tofu, OmniPork Strip garlic chives stir fry, and wok-fried vegetarian shark’s fin with OmniPork luncheon meat with her signature ‘wok hei’, Lui provides a tantalising look at how the heavy meat dependence of Cantonese cuisine could become altogether more cruelty-free. For more information, click here.

The Bostonian Seafood & Grill at The Langham is elevating its brunch experience every Saturday until April 29 by inviting a host of notable bar professionals to take over the restaurant’s bar in a series titled ‘Tales of Hong Kong’. Having partnered with Fernet Hunter founder Raphael Holzer last Saturday, the series continues with Kinou Chen of Central speakeasy 001 tomorrow (April 17), DRiNK magazine editor Holly Graham on April 24, Tony Hsu of The Poet on May 1, London Essence ambassador Natalie Lau on May 8, cocktail consultant Chanel Adams on May 22, and finally, N.I.P. Distilling co-founder Nic Law on May 29. Priced at HK$988 for free-flow cocktails, Perrier-Jouët champagne, Tanqueray gin & tonic, soft drinks, juices, coffee or tea, book your brunch at Bostonian Seafood & Grill online here.

See also: 8 Of The Healthiest Cocktails In Hong Kong

Set atop the Mandarin Oriental in Central, The Aubrey is capitalising on its location in the midst of the business district with a new bento lunch box offering on weekdays. Comprised of sashimi, tempura and robata options presented in hand-crafted bento boxes, The Aubrey’s lunch sets will change every two weeks, offering a taste of the a la carte menu in takeaway format.

For the first three-layer bento set (HK$588), guests can expect a chawanmushi appetiser, their choice of a main course between saikyo miso sablefish, vegetarian tofu steak with mushroom ankake, or A4 Kagoshima tenderloin, with sides such as kakiage tempura, kanpyo maki rolls, salad and miso soup. Meanwhile, the chirashi don set (HK$688) includes chawanmushi, a selection of sashimi over Edomae rice, and a mizuna salad. There’s also the option to add a dessert of cheesecake roll with yuzu cream, or hojicha chocolate mousse with sesame brittle.

Home Videos The WORLD of WINE – Wine News. Cheap wine, tasting notes and cooking with wine The World of Wine – May 2021 … END_OF_DOCUMENT_TOKEN_TO_BE_REPLACED

How to visit Napa Valley on a Budget. In this video Carson and I explain a few ways to enjoy Napa on the cheap. Tip and advice about how to visit Napa … END_OF_DOCUMENT_TOKEN_TO_BE_REPLACED

Home Videos Get To Know Argentina Wine | Wine Folly If you love Malbec, Argentina is your ultimate wine region. But that’s not … END_OF_DOCUMENT_TOKEN_TO_BE_REPLACED