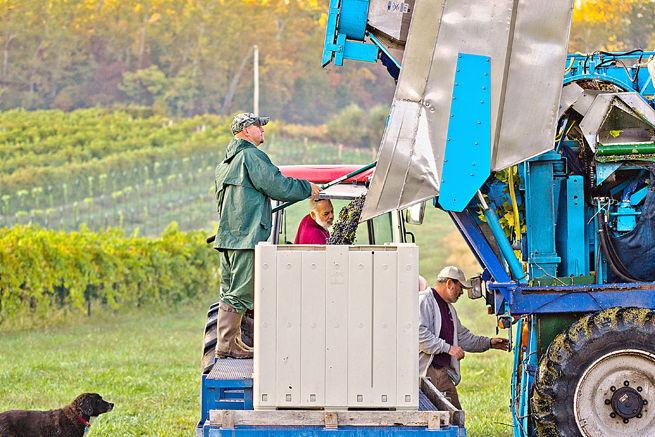 David and Jerri Hoffmann, Washington natives and Florida-based real estate developers who hope to create a national winery and vineyard destination in Augusta, have added Montelle and Augusta wineries to their acquisitions.

Financial details of the latest purchases were not disclosed by company officials.

In Friday’s announcement, the Hoffmanns also said they purchased 250 additional acres of vineyards property from Tony and Cindy Kooyumjian, the previous owners of Montelle and Augusta wineries. The Hoffmanns also are under contract to purchase another downtown building in Augusta at 300 Jackson St.

The couple previously purchased Balducci Vineyards, Knoernschild Vineyard and around 15 buildings in downtown Augusta, including the historic Augusta Wine Co. building and cellar, the Emporium, the former country feed store and grocery and more. David Hoffmann said the company has plans for several businesses, a golf course, an old transportation depot for trolleys, antique trucks and horse-and-buggy rides and a 50- to 90-room hotel, all of which are moving forward “a little ahead of schedule.”

“I just can’t believe the enthusiasm everybody has for the project,” he said, adding that the whole staff of Montelle and Augusta wineries agreed to stay on. “That’s made it really fun.”

Among the shops Hoffmann envisions are an old-fashioned candy store, a bridal store, a bicycle store, a hunting and rifle store and an upscale restaurant. He said the plans also include building a gas station on Jackson Street. The couple had previously announced plans to make improvements to Augusta’s playground and build a public restroom facility, as well as introduce more transportation options. The Hoffmanns hope some of the developments will be open by July or August.

David Hoffmann also announced that Rees Jones, a golf course architect who has designed over 200 courses, including the East Lake Golf Club in Atlanta, the permanent site of the PGA TOUR Championship Tournament, will design a new 12-hole course in Augusta.

Hoffmann added he’s in talks to purchase a few additional properties and anticipates those deals will be complete May 1. When the acquisition period is over, the Hoffmanns expect to have 700 acres of land in Augusta for their project, which will make them the largest single owner of vineyards and wineries in the Midwest.

In Friday’s announcement, the Hoffmanns pledged that each of the winery brands purchased by the Hoffmann Family of Companies will continue to “be unique and hold its own label.” The couple also plans to build the Washington Vines tasting room in Washington, although no other details were given on that project.

In total, the Hoffmanns plan to invest more than $100 million into these properties and the local economy.

Home Videos The WORLD of WINE – Wine News. Cheap wine, tasting notes and cooking with wine The World of Wine – May 2021 … END_OF_DOCUMENT_TOKEN_TO_BE_REPLACED

How to visit Napa Valley on a Budget. In this video Carson and I explain a few ways to enjoy Napa on the cheap. Tip and advice about how to visit Napa … END_OF_DOCUMENT_TOKEN_TO_BE_REPLACED

Home Videos Get To Know Argentina Wine | Wine Folly If you love Malbec, Argentina is your ultimate wine region. But that’s not … END_OF_DOCUMENT_TOKEN_TO_BE_REPLACED