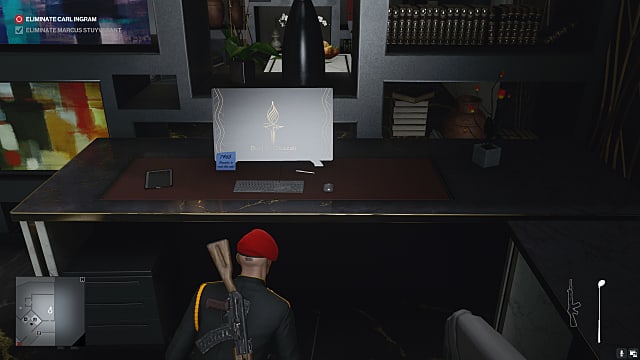 Our Hitman 3 safe code and keypad code guide has every combination for every situation in every level.

Agent 47’s goal might be dispatching targets, but a good bit of plundering the safes and locked rooms never goes amiss and can give you access to some things you may not otherwise find. Each stage has at least one safe or special something behind a keypad lock, and our Hitman 3 safe code and keypad code guide lists them all for you.

Below, you’ll find every safe code and keypad code in the game.

The first is for staff areas on the first floor and Atrium area. You’ll learn this code as you proceed through the stage the first time, but it’s 4706. Note that this code only works for a few staff doors that use number pad locks. Other staff doors in the area use keycard sliders, but you can always outfit 47 with the keycard hacker and bypass those.

The second Dubai code is 6927. This one works in the tower’s two security rooms. The one with the elite guard lounging in the chair contains the evacuation card, which you’ll want to grab if you plan on forcing Ingram and Stuyvesant to evacuate to the helipad and beyond.

The last code in Dubai works on the safe in Ingram’s penthouse guest bedroom: 7465. It’s posted on the computer there, but the numbers are also a bit difficult to make out.

Dartmoor has just one safe code, and using it is risky.

Alexa Carlisle keeps the file on Arthur Edwards in her private office. There’s a puzzle you can solve to crack the code by finding the objects pictured over the safe and deducing the numbers from there. Or you can just enter 1975.

The thing is, this is a very illegal action. If you take the file this way, try doing it when Alexa isn’t in the office. An alternative method is completing the “Death in the Family” murder mystery, which we have a full walkthrough guide on (including how to find all of the clues).

Berlin also has just one code, and you’ll need to do some legwork to get to the safe.

Head down to the club floor, and go backstage to where the DJ is milling around. Go through the staff door, which takes you to Hirschmuller’s office.

The safe is in the back, and the code is 1989. You can chuck the cocaine brick at the dealer in the club bar to clear the Candyman challenge.

Chongqing has no safes and two sets of keypads. One is in Hush’s half of the city and the other near Royce’s ICA facility, including the laundromat near the start of the mission.

The laundromat keypad code and ICA keypad code is 0118. You can find it out for yourself by following The Certainty Principle story and infiltrating Mr. Pritchard’s apartment.

A safe and keypad each await 47 in Mendoza.

The safe is in Yates’ cellar. If you’ve already infiltrated the villa, just grab the cellar key from the bedroom, then go downstairs and stay out of the enforcers’ sight. The safe is at the back, and the code is 2006.

It’s the year Yates and his wife married. Two guards discuss that outside the villa, but the calendar in the bedroom lists the clue and counts as an intel item if you want to grab that.

The keypad is in the wine tasting room, which is adjacent to the barrel room and behind the glass there. That’s near the pump room, in case you get lost.

One way into the tasting room is dropping down the shaft near the glass and hacking the panel there. You’ll need the tech dongle from the workers’ breakroom, so get that if you don’t have it already. Deal with the sommelier and worker inside, then interact with the keypad.

The code is 1945. You’ll get access to the 1945 Grand Paladin, which you can use to either poison Yates or as part of the Last Challenge hidden story mission.

The final mission has one keypad you’ll have to unlock to progress. The code is 1979 and is also right near the pad.

That’s it for all the Hitman 3 safe and keypad codes, but be sure to check out our other Hitman 3 guides for more tips and tricks.

Home Videos The WORLD of WINE – Wine News. Cheap wine, tasting notes and cooking with wine The World of Wine – May 2021 … END_OF_DOCUMENT_TOKEN_TO_BE_REPLACED

How to visit Napa Valley on a Budget. In this video Carson and I explain a few ways to enjoy Napa on the cheap. Tip and advice about how to visit Napa … END_OF_DOCUMENT_TOKEN_TO_BE_REPLACED

Home Videos Get To Know Argentina Wine | Wine Folly If you love Malbec, Argentina is your ultimate wine region. But that’s not … END_OF_DOCUMENT_TOKEN_TO_BE_REPLACED