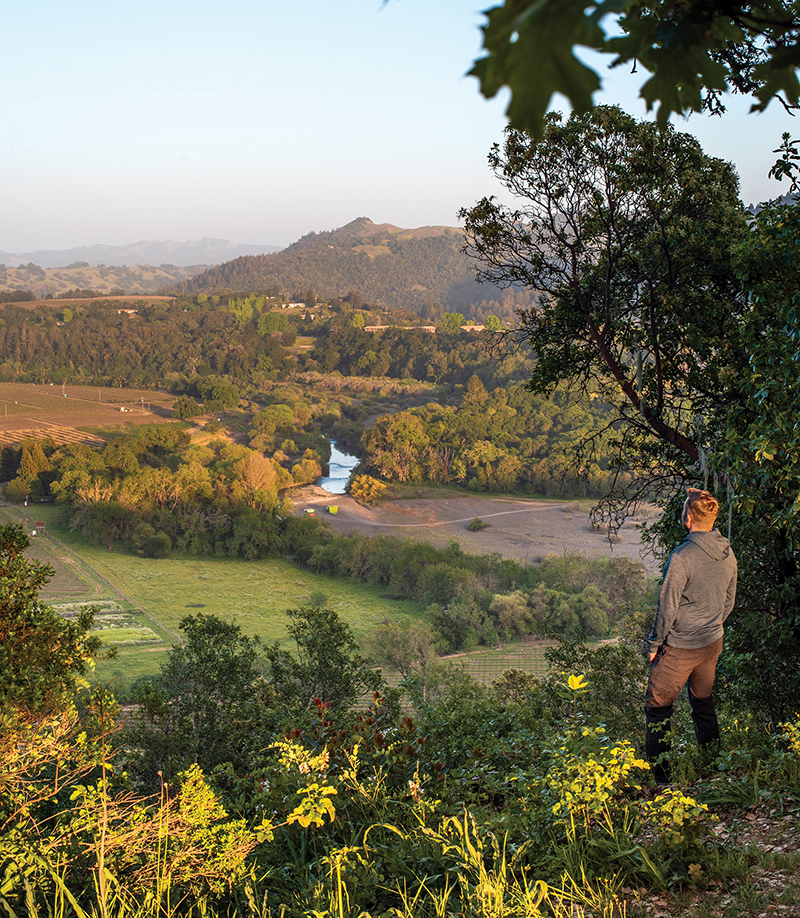 More than 10,000 years ago, according to archaeologists, Healdsburg in Sonoma County was a busy place. Southern Pomo and Wappo Tribes lived here, fishing and hunting amid the rolling hills and lush valleys that still draw visitors today.

That was until 1841, when sea captain Henry Fitch established Rancho Sotoyome, stretching along what we know as the Russian River and Alexander Valley. Fitch hired fur trapper Cyrus Alexander—whose namesake would later identify the nearby wine-rich valley—and later, Fitch’s wife would take over, eventually selling parts of the Rancho to pay her taxes. One of those buyers, Ohio native Harmon Heald, would end up with most of the property, and by 1857, he’d laid out much of his own namesake, Healdsburg.

I thought of Heald’s careful city planning and early beginnings as I hiked across Healdsburg Ridge Open Space Preserve, with panoramic views to the surrounding picture-perfect vineyards, and generous miles of woodlands, oak groves, forest, grassland, wetlands, vernal pools and rocky chapparal, not to mention a secluded pond with lily pads.

I took my time on the double-loop trail there one sunny spring afternoon before the pandemic began, gaping at the Russian River, Fitch Mountain, the Mayacamas Mountains and even, faintly, the coastal range. I was thankful that local leaders in 2008 had had the wisdom to protect this quiet 161-acre parkland at the northern edge of Healdsburg.

I had been to the town once before with a fellow who was, let’s say, a devotee of the wine gods. Fair enough; that’s certainly for many the greatest pull to this once rather sleepy agricultural town that now is arguably one of Sonoma County’s favorite new destinations for everyone from foodies to art enthusiasts. On that first visit, I remember strolling around Healdsburg Plaza, and the chic boutiques and leafy streets streaming outward filled with Victorian beauties and Queen Anne cottages.

That visit was in 2014. Three years later, much of Sonoma County would explode into flames as wildfires blazed across Northern California’s beloved wine country. Forty-four people would die, nearly 200 were hospitalized, and the region could count some $15 billion in losses. Residents in the thousands would permanently pull up stakes. But many stayed on to rebuild. I was curious to see what had prevailed, and what Healdsburg now had to offer visitors.

One afternoon during my visit, I picked up a map for a self-guided architectural tour at the Healdsburg Chamber of Commerce & Visitors Bureau. Listing 12 properties scattered around eight blocks, the slim guide noted that when Harmon Heald laid out the town in 1857, he donated land for the plaza, clearing away the native oak and madrone to be later replaced with roses, palms and citrus trees. He would be just as generous in setting aside land for a school, cemetery and churches. Other lots were sold for a mere $15 each. Today, most of the homes built on that land could of course not be bought for such a song, but never mind—they are so pleasing to the eye, with their admirable craftsmanship and gorgeous gardens, with façades peaking beyond blankets of wisteria and cherry blossoms standing sentinel along the sidewalks.

I first walked over to St. Paul’s Episcopal Church at 209 Matheson St. and stood before the unassuming white clapboard façade. According to my guide, St. Paul’s Gothic Revival style is common among small-town churches, but its crenelated porch roof and side buttresses resemble European stone houses of worship. I liked its simplicity, and also the lovely stained-glass windows.

Among the first homes I came across was the asymmetrical George Alexander House built in 1905 by the successful banker on Tucker Street. The classy edifice held my gaze with its quatrefoil windows and tower, painted shades of tan, lime and maroon, and an attractive balustrade and inviting porch bedecked with a matching white wicker love seat and rocking chairs. Just a few steps over, by comparison, stands the James Thompson house, utterly modest by comparison but striking, too, in its subdued design—most especially, I should add, in reading that the farmhouse, erected in 1864, and today exuding cheer with its bright yellow door frame, was built to house the Thompson family’s nine children. 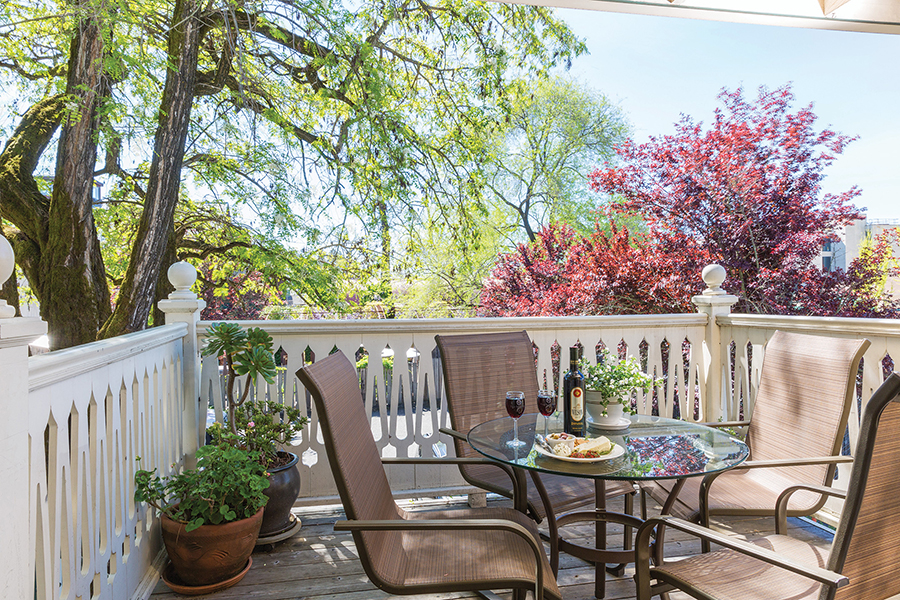 Healdsburg Inn on the Plaza

I eventually reached Fitch Street, which brought me to the Carnegie Library—one of more than 2,500 around the world made possible by Scottish-American businessman and philanthropist Andrew Carnegie and built between 1883 and 1929. Healdsburg got its own in 1911, and today the library still has a commanding classic presence but ceased to function as a library in the 1980s. It’s a museum now but, sadly, during my visit it was closed.

I myself would have my own comfortable digs in Healdsburg as a guest at the Healdsburg Inn on the Plaza. Part of the Four Sisters Inn collection, Healdsburg Inn sits at the south side of the plaza and is built into the town’s only Victorian commercial building; all others like it that once stood here succumbed to the 1906 earthquake in San Francisco.

The building underwent seismic retrofitting in 2004, but it still exudes its historical roots, with exposed interior brick walls crafted by Italian stonemasons and the original staircase. My spacious room, one among the inn’s 12, was on the second floor and had bay windows that framed fluttering tree branches and had a perfect view of the plaza. I turned up the gas fireplace as I unpacked and nibbled on the home-baked chocolate chip cookies placed in my room ahead of my arrival. Later, I sank into the giant bathtub and also a Willa Cather novel set in the same period as Healdsburg’s pioneer era. In the morning, I sat in the inn’s pleasant breakfast lounge looking onto the plaza while awaiting a pesto and vegetable omelet with a blueberry-sour cream scone, a perfect start to the day ahead.

I had planned to hike this day but decided to put that off until the afternoon so I could explore more of Healdsburg’s plaza. You can’t get physically lost in the small square, but you can get lost in thought in a place like Aerena Gallery, across the plaza from the inn. 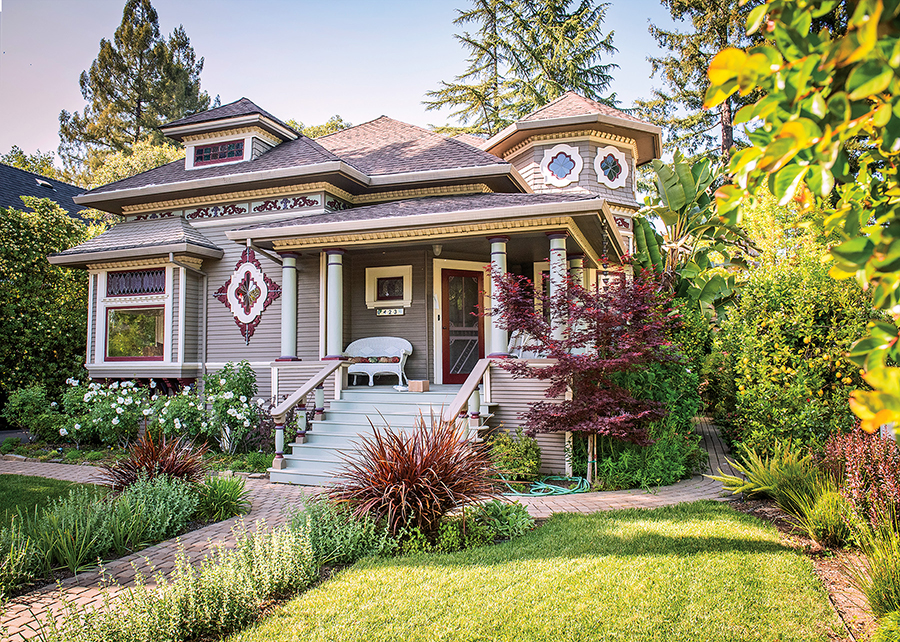 The gallery is actually one of four in the wine country; the other three are in Napa, St. Helena and Yountville. All are dedicated to exhibiting contemporary art by both local artists and those farther afield. At the Healdsburg gallery, I was mostly pleased with depictions of—what felt to be familiar—landscapes, of vineyards and sunflower fields and thick groves of birch trees. Afterward, I strolled around the plaza, eventually slipping into the Hand Fan Museum.

In the course of my travels, I’ve grown fond of fans, particularly in the occasional absence—or simply instead—of air conditioning. You could say I became a fan of fans, collecting them from Spain and Portugal, later Austria, Cuba, Japan and Vietnam. And so to see this stamp-size mecca honoring these both practical and flirtatious objects thrilled me. “Art, culture, geography and history,” reads the museum’s brochure, “all in the palm of your hand.”

The first museum in the country to be exclusively dedicated to hand fans, the exhibit opened in 2002 and rotates its astonishing inventory of 3,000 fans every few months. A visit here is like traveling the world: I learned about the legacy of a 7th century Japanese monk who supposedly invented the folding fan upon observing how a bat flutters its wings. I stood transfixed before a Chinese fan made around 1850 for export to Europe, with Mother of Pearl sticks and dozens of characters intricately gracing the leaves, their garments crafted from silk fabric painstakingly glued onto the fan. 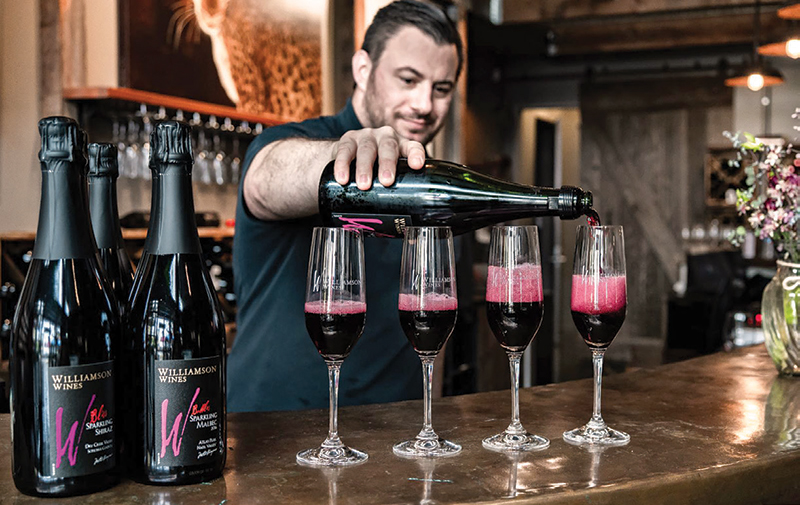 I managed to pull myself away from the plaza and headed down the street to Williamson Wines, where I was scheduled for a wine pairing. Chaperoned by tasting room managers Marc DeCoulode and Mike Mahoney, I sank into a plush armchair to first talk with them about their business since the fires, particularly since Williamson does not sell its wines in stores. The men explained that after 35 years, Williamson had developed a loyal membership base—“in the thousands,” Mahoney noted—across the United States.

This impressed me in light of the fact that Williamson does not distribute. Ninety percent of the wines go to its wine club and the rest is sold in its tasting rooms. But with more than 40 wines drawing varietals from 15 vineyards across Sonoma, Mendocino, Lake and Napa counties, the French-inspired Australian winemakers Bill and Dawn Williamson seemed to have found a flavor for every palate—yet another accolade, considering the couple had spent their careers in software development. I later thumbed through “Way Beyond Wines: The Williamson Wines Story,” (which includes a chapter cleverly titled “The Much Maligned Merlot” in affectionate reference to the film “Sideways”), learning about the couple’s painstaking education in microclimates and grapevine root systems and thoughtful efforts to spare their chardonnay grapes from California’s legendary heat.

As I waited for the tasting to begin, DeCoulode shared with me his story of visiting the Sonoma Valley and finding Williamson Wines nearly 20 years ago when he was working as a police officer at UC Berkeley. Upon retiring, he got to know the Williamsons through the wine club and they offered him a position. He’s now pleased to be sharing his enthusiasm for his favorite wines. Lobster feeds, pig roasts, a cooking channel and European cruises for Williamson’s wine club members also make the winery an easy sell. 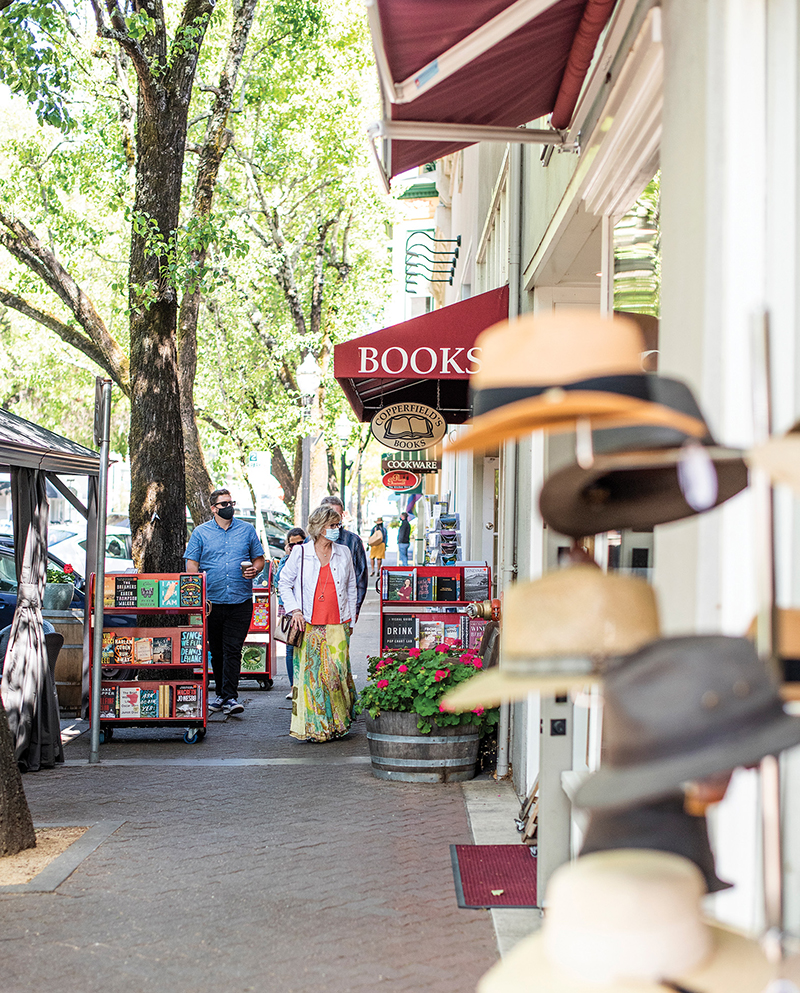 Shops and restaurants in Healdsburg Plaza

We started out with a pleasantly, surprisingly dry and light gewurztraminer, paired with poached prawns in a Thai curry with pickled peppers and chili. The wine neutralized the spice—I probably couldn’t have handled it otherwise—leaving a sublime aftertaste. Next up was eggplant parmesan paired with a cabernet-merlot blend, not to be outdone by braised short rib with celery root puree, balsamic garlic and herb jam, together with Williamson’s Elate Grange Cuvee. The smorgasbord concluded with bread pudding, roasted mushrooms and truffles alongside Williamson’s Rapture pinot noir and its hint of raspberry, mushrooms, truffles as well as grenache originating in the Russian River Valley.

And it was there I returned later during my hike in the hills overlooking Healdsburg. I had deviated from the main trail to have a rest and snack at the Russian River Overlook, leafing through my journal notes chronicling vineyards and fires, describing Native American life and pioneers, among them an Ohio settler, and proud Victorians and modest farmhouses. Afterward I strolled under blue oaks and madrones, ending up at the Serpentine Overlook, where I could see the Mayacamas Mountains, and snow atop them, more vineyards and oak clusters, a ravishing vista, all of it. As I made my way back to my car, I reflected on the many residents who had fled the fires, many for good, which made my short stay all the more worthwhile and worth yet another visit, both for a feast for the stomach as for the eyes.

Home Videos The WORLD of WINE – Wine News. Cheap wine, tasting notes and cooking with wine The World of Wine – May 2021 … END_OF_DOCUMENT_TOKEN_TO_BE_REPLACED

How to visit Napa Valley on a Budget. In this video Carson and I explain a few ways to enjoy Napa on the cheap. Tip and advice about how to visit Napa … END_OF_DOCUMENT_TOKEN_TO_BE_REPLACED

Home Videos Get To Know Argentina Wine | Wine Folly If you love Malbec, Argentina is your ultimate wine region. But that’s not … END_OF_DOCUMENT_TOKEN_TO_BE_REPLACED