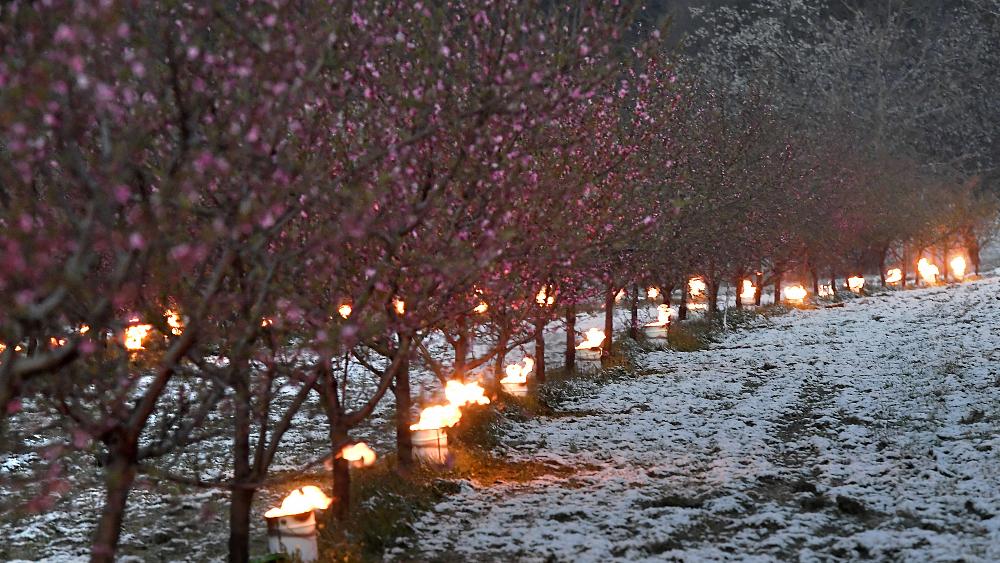 French fruit growers and winemakers are warning that the majority of their harvest this year has been lost to this week’s frost.

“No region has been spared: beets, rape, barley, vines fruit trees … All the different kind of support must be activated urgently,” the National Federation of Unions for Farmers (FNSEA) stressed.

All through the week, farmers across France had tried to save their harvest from the frost by lighting fires and candles.

In the south-eastern départements of Drome and Ardeche, temperatures dropped to as low as -8°C during the nights this week. The mercury has thus fallen by 33°C over 10 days.

Local winemakers and fruit growers reported to the FNSEA that they had lost up about 90 per cent of their harvest.

Philippe Pellaton, President of the Inter-Rhone Association of winegrowers, has also warned that this year should see “the smallest harvest of the Côtes du Rhône in the last 40 years.”

He estimates that about “80 per cent to 90 per cent” of the nearly 68,000 hectares making up this terroir have been lost to the frost.

“The winegrowers are devastated, downcast,” he went on, highlighting the multiple strains they have had to contend with in recent years including Brexit, US tariffs and the COVID-19 pandemic which all put pressure on sales and exports.

Burgundy, which has 28,841 hectares of vines, fared no better.

“We have at least 50 per cent damage,” Francois Labet, President of the Bureau interprofessionnel des vins de Bourgogne (BIVB), said.

The region’s prestigious Chablis appellation is particularly hit with the damage estimated at about “80 to 90 per cent” by Frédéric Gueguen of the office of the Federation of Defense of the Chablis appellation. “I fear that there are some farms that will not recover.”

The south of Burgundy has also recorded -8°C temperatures.

“It is historic because of the intensity of the frost and the extent of the areas affected: no one was spared in Saône-et-Loire. It is exceptional,” Thomas Canonier, wine consultant at Vinipôle Sud-Bourgogne, highlighted.

Winemakers in the Bordeaux region — in the southwest — have also sounded the alarm.

According to the Bordeaux Wine Trade Council (CIVB), the frost has “hit hard” vast areas of the Bordeaux vineyards, with temperatures sometimes falling below -5°C and affecting all 65 appellations, which represent 111,000 hectares of vines, or about 15% of the French vineyard.

In the Dordogne, “not a single farmer has been spared” in the vineyards of Bergerac and Duras (about 12,000 hectares), which includes the famous Monbazillac, Eric Chadourne, President of the Federation of local wines, emphasised. “It’s to varying degrees, it goes from 5 per cent to 100 per cent of the buds depending on the parcels,” he added.

The President of the national association of apples and pears also warned that “peaches, nectarines, apricots will be rare on the shelves this year” because of the recent cold temperatures.

Agriculture Minister Julien Denormandie has said that the government is “fully mobilised to provide the necessary support” to farmers impacted by the exceptional bout of late frost.

The government has also said that €70 million from the country’s €100 billion COVID-19 Recovery Plan would go to farmers so they can invest in equipment to protect their crops against climatic hazards.

Home Videos The WORLD of WINE – Wine News. Cheap wine, tasting notes and cooking with wine The World of Wine – May 2021 … END_OF_DOCUMENT_TOKEN_TO_BE_REPLACED

How to visit Napa Valley on a Budget. In this video Carson and I explain a few ways to enjoy Napa on the cheap. Tip and advice about how to visit Napa … END_OF_DOCUMENT_TOKEN_TO_BE_REPLACED

Home Videos Get To Know Argentina Wine | Wine Folly If you love Malbec, Argentina is your ultimate wine region. But that’s not … END_OF_DOCUMENT_TOKEN_TO_BE_REPLACED