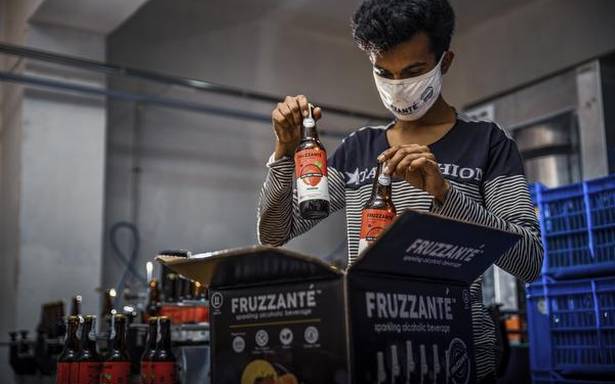 COVID-19 lockdowns made India’s locally sourced and produced fruit wines a popular option, with many wineries doubling their sales in 2020

The pandemic changed the way we consume food. Households, restaurants and even luxury hotel chains gave up on exotic ingredients and looked into their backyards to use local food to survive successive lockdowns.

The support for the local was not just limited to food; the Indian fruit wine industry, which for years had been struggling to find shelf space between Shiraz and Chardonnay, realised that its time to shine had come.

“Being at home has made people more experimental with their food and drinks. Earlier, everyone preferred to go out for dinners and parties, where they chose from a curated drinks menu that usually overlooked Indian fruit wines. But with the restaurants closed due to the pandemic and supply chains unable to import international brands, they were back in the limelight,” says Akalpit Prabhune, director and chief winemaker of Rhythm Winery.

When Akalpit started the Khadakwasla-based winery in 2010, his motto was to showcase fruits grown in various belts of Maharashtra. Stepping out of the grape palate, he started making wine from other fruits that Indians have known for generations.

“We started with a strawberry wine made from fruit procured from Mahabaleshwar. Eventually we added plum, peach, kiwi and alphonso. All fruits are sourced from Maharashtra, except kiwis which are brought in from Arunachal Pradesh. ” he says.

In 2019, the company launched two premium wines — Mulberry and Raspberry — which are priced slightly higher compared to the other wines. Available in Maharashtra, Goa and parts of Arunachal Pradesh, Rhythm wines are also exported to the United Kingdom and Singapore. “We started exporting to the UK in 2018. Our Alphonso wine has been well-received by prime Indian restaurants in London like Ooty, Sindhu and Brigadiers,” he says. In India, the product is found in holiday destinations like Mahabaleshwar and Lonavala.

Social media helped the brand penetrate Pune and Mumbai. “People were online a lot. I used the opportunity to make them familiar with our brand name by frequently posting about our winery on Instagram and interacting with our followers by hosting quiz sessions. This worked: we saw more sales from retail stores in the latter part of 2020,” adds Vidita.

While social media strategies helped Rhythm Wines grow, it was the emphasis on local produce that worked for Arunachal Pradesh-based Naara Aaba. “The series of lockdowns had affected the distribution of goods, and made many ingredients scarce. This was when the demand for Indian fruit wine increased; we had good response for our kiwi wine,” says Tage Rita, founder of Naara Aaba, one of India’s foremost organic kiwi wines.

In the initial days of lockdown, when the work in her winery stopped, Rita turned her attention to other fruits.

In October 2020, her company Lambu-Subu Food and Beverages launched Narra Aaba pear and plum wines. Like kiwi, the plum and pear are sourced directly from farmers in Ziro valley, who grow large amounts of the fruit, which go waste due to lack of a proper market. “Our company supports over 300 farmers, out of which 150 come under organised cooperative societies,” she adds.

During lockdown, sourcing fruits and getting them crushed in time became a hurdle for wineries. So at Bordi-based Hill Zill Winery, a company that makes sparkling alcoholic beverages from local fruits, the founders — Priyanka Save and Nagesh Pai — took special permissions to run their trucks to fetch harvested fruits.

“We support over 150 farmers and cooperatives through our winery. If we had not picked up these fruits in time, the farmers would have suffered huge losses. So we had to reach out to the authorities to allow our trucks to run to Mahalabeshwar and Ratnagiri during lockdown. We had to be mindful about sanitisation and social distancing regulations,” says Priyanka. The efforts paid off, as despite a pandemic, the company surpassed its yearly sales target in October 2020.

Hill Zill supplies its drinks under the brand name Fruzzante, made from pineapple, mango, strawberry, chikoo and orange that have 6% alcohol. It has a strong distribution network in Maharashtra. The company is now stepping up to launch in Goa, Puducherry, Punjab, Telangana and Karnataka. Adds Priyanka, “This is a great time for people and companies to experiment with local products as the focus is on indigenous produce now more than ever.”

Home Videos The WORLD of WINE – Wine News. Cheap wine, tasting notes and cooking with wine The World of Wine – May 2021 … END_OF_DOCUMENT_TOKEN_TO_BE_REPLACED

How to visit Napa Valley on a Budget. In this video Carson and I explain a few ways to enjoy Napa on the cheap. Tip and advice about how to visit Napa … END_OF_DOCUMENT_TOKEN_TO_BE_REPLACED

Home Videos Get To Know Argentina Wine | Wine Folly If you love Malbec, Argentina is your ultimate wine region. But that’s not … END_OF_DOCUMENT_TOKEN_TO_BE_REPLACED