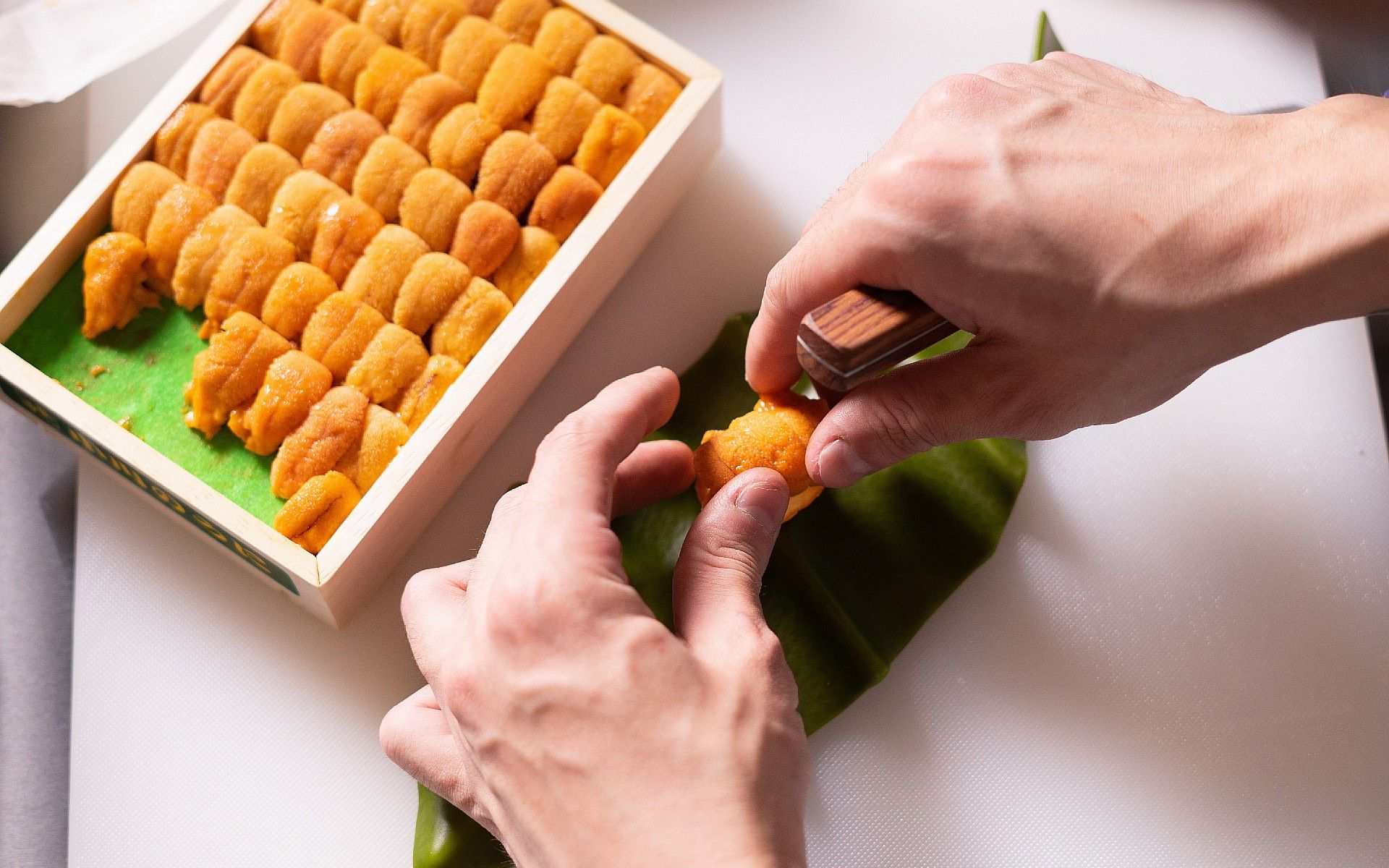 Tatler Dining’s first dégustation in months renders our dining editor speechless—or is she simply too full to breath?

Muscle memory? You could have fooled me. Mere months of lockdown have crippled this food critic’s greatest asset: her appetite. Feeling a lot like an athlete just returned to the field, my table manners are ungainly, my vocabulary dusty, and my senses overwhelmed. Nevertheless, what a way to ‘break fast’! Halfway into Hide’s 14-course menu, I can feel my heart racing—a familiar indication of being dangerously full. I’m out of practice, but I wouldn’t want to be any other place.

A born sceptic, I was plagued with two concerns before even setting foot in KL’s hottest new restaurant: (1) Hide already exists by way of a Michelin star restaurant in Piccadilly, London, although I suppose ‘Bersembunyi’ or ‘Menyorok’ would be a mouthful, and (2) isn’t the speakeasy concept passé? When famished, the last thing I want to do is to play hide and seek with my food.

Seconds after arriving, however, I’m made to eat humble pie. Loathe as I am to admit it, there is some fun to be had from entering the cavern-like restaurant through a painting. The experience puts guests in the shoes of Ali Baba stumbling upon the Cave of Wonders—minus the fear of forty thieves wielding sabres.

See also: PRIVATE @ The Chow Kit: Come For The Novelty, Stay For The Nosh

Executive chef Shaun Ng stands at attention, looking for all the world like a K-pop star. Well, at least he does in his promotional portrait. Since he and his team are abiding by the SOPs, everyone is indistinguishable behind their masks. Sure enough, I act the fool by addressing sous chef Lucas Ong as if he were Shaun, and spend the next half hour wishing the ground would swallow me up.

Thankfully, we are distracted by small dishes sailing in from the kitchen. From trout served between Berber Brik to briny bivalves, four of the first courses are seafood-based, and each brilliant in its own way. Briny uni is balanced atop airy potato puffs that crunch and crackle merrily between my incisors, red sea bream is doused in punchy persimmon vinegar, and unlike those gargantuan, gloopy oysters that are impossible to get around, tonight’s dainty Shigokus peek shyly from beneath beads of black caviar.

Seeing as Ng has served greats such as Eric Ripert (Le Bernadin in New York) and Jon Yao (Kato in Los Angeles), it’s safe to say that seafood is his forte. Whether or not he abides by Buddhism à la Ripert remains a private matter; but anyone who converts from law to the culinary arts must have a conscience. Good move, kiddo.

After the opening dishes, expect a lot more seafood to head your way, but not before an intermission starring one of Brazil’s finest snacks. This is the first thing that really snags my attention, that brings me back to the here and now, as a familiar perfume might snap one out of a séance. Hot and crispy but not dense, the sago-based Truffle Dadinho has a QQ quality that’s coveted in Asia, but julienned black Périgord truffles lend the dish European appeal.

In response to this, Ng says, “I try not to limit myself to local produce, hence trying to source the best international ingredients. We take influences from all around the world, so hopefully you have some fond memories to bring home, especially now that it isn’t possible to travel.”

So travel we do, first to Japan, where black cod is served atop Koshihikari rice, and then to Northern Ireland by way of aquatic poultry. The cod, the first (and only) dish that falls short so far, is marred by too big a pinch of salt, whereas the latter helps me understand why Silver Hill Duck is the darling of fine dining chefs in Asia.

Praise for Hide’s tableware—a huge element in the fine dining experience—must be inserted into this paean to the food, so here we go: these aren’t porcelain objects one simply picks off Lazada, but collectibles in their own right. Some years ago, I very nearly considered acquiring JR and Prune Nourry’s dinner plates, but the thought of the look on my fiancé’s face stopped me from dropping US$800.

Inasmuch as sugar is a sin these days, I’ve been limiting desserts to just once a day, even if that means squeezing multiple servings into one seating—which is why Hide’s trio of desserts fit into my diet plan.

These are fruit-forward desserts with a cooling aspect, so diners who insist on Molten Lava Cake had better return to the 1980s. Marked by robust flavours that roil around in the mouth, pastry chef Michelle Wong’s piña colada-inspired treat is as well-rounded as an Old World wine. However, it’s her contemporary Kueh Kapit laced with bananas that wins me over.

So for all my first world misgivings, my first fine dining experience since MCO 2.0 is a tremendously happy one. Perhaps I am seeing the overall experience through rose tinted glasses (read: wine pairing), but no matter. As I peer at my merry party of seven (all responsibly spread out, of course), I say a silent prayer that the joys of eating out won’t be muted again so soon.

Home Videos The WORLD of WINE – Wine News. Cheap wine, tasting notes and cooking with wine The World of Wine – May 2021 … END_OF_DOCUMENT_TOKEN_TO_BE_REPLACED

How to visit Napa Valley on a Budget. In this video Carson and I explain a few ways to enjoy Napa on the cheap. Tip and advice about how to visit Napa … END_OF_DOCUMENT_TOKEN_TO_BE_REPLACED

Home Videos Get To Know Argentina Wine | Wine Folly If you love Malbec, Argentina is your ultimate wine region. But that’s not … END_OF_DOCUMENT_TOKEN_TO_BE_REPLACED