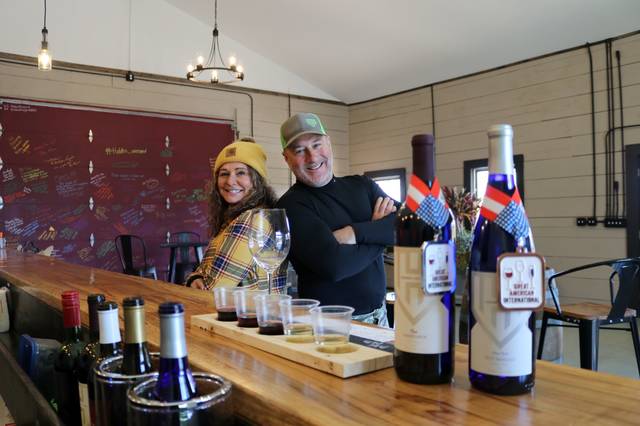 About the time when you’re trying to decide if Hidden Vineyard is a transport to West Coast sophistication after sipping that restrained petit manseng, or if instead it is more of a playful family winery where a bottle called Franc the Tank is the bestseller, you round the corner to the grand promenade between nine acres of vines. And then it becomes clear the place is 100 percent Yadkin Valley, because Pilot Mountain stands serenely on the horizon and there’s nothing else to do but stop and take it all in.

It’s called Hidden Vineyard because when Tim and Lisa Sherman moved in back in 2017, the neighbors confessed they didn’t even know the vineyard was there.

Tucked just outside Dobson near the Yadkin River, Hidden Vineyard opened its delightful tasting room in November 2020 with an estate-grown lineup of two whites and three reds. The Shermans tend the vines entirely themselves, and it is indeed a family affair – they co-own the vineyard with their son and daughter-in-law Josh and Claudia Longenette.

Like any startup vineyard, it’s been a journey that took the combined forces of the Shermans’ horticulture-focused handiness and the business and marketing savvy of the Longenettes.

‘We retired and bought a vineyard’

Lisa Sherman’s degree is in horticulture, but she never used it professionally until now. The Shermans met on yearbook photo day at an elementary school in Ohio. Lisa was first a photographer and later an account manager for Lifetouch, the national school photo and yearbook company. She took Tim’s photo when he was a fifth-grade teacher. Years later, their paths crossed again when Tim was an assistant principal, and sparks flew.

“He didn’t remember me,” she laughed.

Their first date was to a Cleveland Indians baseball game, and Tim eventually found those photos she took from when he taught fifth grade.

When the Shermans started to think about retirement in 2017, the Longenettes — who were living in California — were thinking about investment ideas.

“None of us had vineyard experience other than being wine lovers,” Claudia said. “We thought of the East Coast and North Carolina region, because when Josh was first starting to work, he was in South Carolina. Lisa and Tim would go and visit him and they would stop at vineyards in Virginia and North Carolina along the way.”

The Shermans lived in their travel trailer while Tim rewired and replumbed the winery buildings, which include an 1890s tobacco cabin that was moved to the site from Yadkin County in the 1970s. Tim enrolled in three classes at Surry Community College’s viticulture program: Introduction to Viticulture; Grape Harvest; and Grapes, Pests and Diseases. They sanitized and fertilized the soil and got to work pruning. The Longenettes held down the business side of things, and everyone put their stamp on Claudia’s curated design for the tasting room.

Tim hand-planed trees that fell on the property during Hurricane Florence, and the wine bar itself, several doors and the bathroom sink pedestals are all beautifully repurposed from the grounds. The Longenettes acid-stained the concrete floors, and Josh poured the concrete work bar along the tasting room’s back wall.

The tasting room exudes an earthy elegance — the sophistication of wine culture meets the materials only nature can craft. A playfulness courses throughout the space, where even in the restroom curly cursive letters encourage visitors to “please sit pretty.” Outside, Lisa’s educational vine row — “Pilot Path” — offers a space where the Shermans and Longenettes personally introduce visitors to each of the grape varietals they grow.

Shaping wine through precision and happenstance

The Shermans literally tend every grape.

Lisa, who calls herself “the vine witch” and has an Instagram feed with the same moniker, hand-prunes the leaves around the clusters.

“So there’s never a time that the grapes aren’t absorbing the sunshine,” Lisa said. “I’m going to expose my grapes from the time they’re beady size.”

The family may have bought the vineyard for a love of wine, but the current tasting flight demonstrates their refined palates. And also their sense of fun. It opens with the petit manseng, a stainless steel-aged white with floral and honeysuckle front and an invigorating but not overpowering ginger and lemongrass finish.

It’s followed by the Chardonnay — Lisa’s pet project — that she said she always knew she would name after her fun-loving dog, Lunchbox. The Chardonnay begins with classic vanilla and French oak, but concludes with surprising overtones of pear and green apple on top of traditional buttery smoothness. That finish stems from a last-minute need for an extra barrel for the batch. Tim went to the local wine supply shop and there was no French oak to be had.

“I needed one that day,” he recalled, and headed home with a Hungarian barrel.

“It turned out to be a blessing in disguise,” Lisa said when they realized the dimension it brought to the Chardonnay.

Both the petit manseng — called Pilot Path — and the estate’s Chambourcin won medals in the 2020 Great American Wine Competition. The Chambourcin — named for Claudia’s nickname of “Claus” — features the dual red fruit-and-earth character at which the varietal so readily excels.

Rounding out the five-wine tasting flight is Hidden Vineyard’s top seller – Franc the Tank, which has won over sweet and dry wine aficionados alike, and even a few stalwart beer drinkers. Named by Josh in honor of the Will Farrell movie “Old School,” this is Hidden Vineyard’s take on a sweet wine. It’s a Cabernet Franc infused with a prominent blueberry finish. Think sweet wine beyond muscadine.

“There aren’t many sweets that are barrel aged, and this is barrel aged,” Lisa explained of its unusual character due to French oak.

“One of the things that we wanted to make sure we promote is that there is more that we can do, that we can come up with a very good sweet wine but made out of Cab Franc,” Claudia added.

The family credited much of their quick success to the supportive Yadkin Valley wine culture and their collaborative winemaking neighbors. They are confident the region will continue to gain acclaim, and said their business plan — despite the pandemic — is exactly on track.

The immediate future of Hidden Vineyard isn’t rosy — it’s blush. In Spring 2021, they plan to release a blush merlot with a fragrant strawberry nose.

Home Videos The WORLD of WINE – Wine News. Cheap wine, tasting notes and cooking with wine The World of Wine – May 2021 … END_OF_DOCUMENT_TOKEN_TO_BE_REPLACED

How to visit Napa Valley on a Budget. In this video Carson and I explain a few ways to enjoy Napa on the cheap. Tip and advice about how to visit Napa … END_OF_DOCUMENT_TOKEN_TO_BE_REPLACED

Home Videos Get To Know Argentina Wine | Wine Folly If you love Malbec, Argentina is your ultimate wine region. But that’s not … END_OF_DOCUMENT_TOKEN_TO_BE_REPLACED