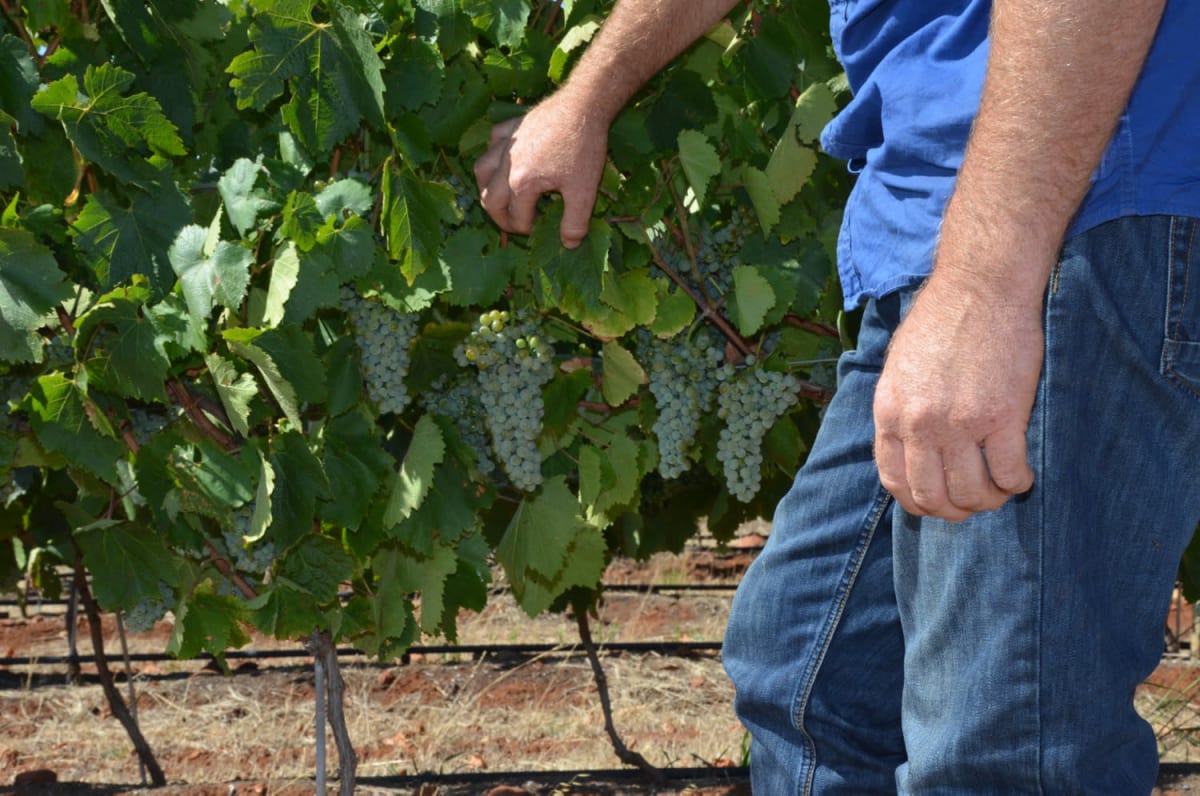 In the depth of night on the Mt Camel Range, a passing driver might see lights floating above the vineyards this month.

Neither mystic nor extra-terrestrial, the lights are from a grape harvester being pushed to its limits.

Grapes can only be machine-picked on cool nights. During the day the fruit softens up too much and gets damaged when shaken off the vine.

The Chalmers Heathcote vineyard is one business lucky enough to own its own French-made harvester outright.

The purchase was motivated by a desire to minimise the risk of grape diseases being tracked onto the property by hired equipment and contractors — but the decision has paid off this harvest for an entirely separate reason.

Vineyard manager Troy McInnes said he normally employed up to 60 people a day for the harvest.

“But now our contact said about 18 is where we’re going to be this year,” Mr McInnes said.

“So we’ve gone from hand-picking 25 tonnes in a day to five or six tonne.”

The grape harvester, on the other hand, can pick five to six tonnes an hour.

“What it can do in an hour would take 12 people a day,” Mr McInnes said.

In the world of grapes, the labour shortage is far from a surprise.

Mr McInnes said over time he had witnessed the quality of workers drop.

“You just don’t get those experienced people anymore.”

The Chalmers Heathcote vineyard is on the smaller side, with only 40 ha planted.

Also in the vineyard’s favour is the range of grape varieties used on the property.

Rather than having 200 ha of Shiraz ripen at once in February, Mr McInnes stands a chance at harvesting most of the grapes thanks to slightly different ripening times.

Most of the grapes from the Chalmers Heathcote vineyard are sold on to winemakers wholesale, with a percentage of rarer varieties grown retained for Chalmers.

The Heathcote site has won awards for its diverse grape varieties, many of them never before grown in Australia.

The current superstar on the property is the Falanghina grape.

“It’s one of our latest and greatest,” Mr McInnes said.

“There are only very small plantings in the world, in Italian villages, so this would be probably up there as the largest commercial planting of Falanghina in the world.”

The vineyard has 3000 Falanghina plants, all still on the young side.

After surviving quarantine in Melbourne for two years, the single imported Falanghina plant was propagated at the Chalmers’ Mildura nursery, creating the 3000 growing today.

“It’s a long process and 80 per cent of the varieties here have gone through that,” Mr McInnes said of the Heathcote vineyard.

“The talk of climate change is a big thing, in the wine industry and all farming, and some of these new varieties like Nero d’Avola and Negroamaro come from dry areas and are pretty drought-tolerant.

“The old varieties fall down in the heat but these Italian varieties are handling things a lot of better. We are ahead of the game.”

The Heathcote vineyard was established by Chalmers in 2009 as more premium and experimental site, lured in by the good results other grape growers were having with the rich Mt Camel Range soil.

Varieties grown include Lagrein, Refosco and Schioppettino from northern Italy, and Aglianico, Malvasia, Greco Bianco and Fino from Naples.

Home Videos The WORLD of WINE – Wine News. Cheap wine, tasting notes and cooking with wine The World of Wine – May 2021 … END_OF_DOCUMENT_TOKEN_TO_BE_REPLACED

How to visit Napa Valley on a Budget. In this video Carson and I explain a few ways to enjoy Napa on the cheap. Tip and advice about how to visit Napa … END_OF_DOCUMENT_TOKEN_TO_BE_REPLACED

Home Videos Get To Know Argentina Wine | Wine Folly If you love Malbec, Argentina is your ultimate wine region. But that’s not … END_OF_DOCUMENT_TOKEN_TO_BE_REPLACED